‘Classical Hollywood cinema possesses a style which is largely invisible and difficult for the average spectator to see. The narrative is delivered so effortlessly and efficiently to the audience that it appears to have no source. It comes magically off the screen.’ John Belton, film scholar, Rutgers University

Classical Hollywood narrative refers to the filmmaking tradition established in Hollywood during the 1920s and 1930s. It became the dominant style throughout the western world against which all other styles were judged. While there have been some challenges to it in recent years, it remains the accepted style for most Hollywood films today.

Don't use plagiarized sources.
Get Your Custom Essay on Classical Hollywood Style Just from $13,9/Page

The Hollywood style is so effective in convincing us what we see on the screen is real that we often have to forcibly remind ourselves that it is ‘only a movie’. Oddly Hollywood, so often associated with everything that is fake, is also the home of classical narrative realism. ‘Tinsel town’ has spent a fortune every year since the 1920s faking realism.

What are classical Hollywood narrative films?

Classical Hollywood narrative films have plots that progress through time in a linear way, are based on character-driven action and use the continuity editing style (see page 233).

The style is ‘classical’ because it is based on the classical principles of literature and art. A work is described as classical if it has perfect balance and symmetry. It must also be clear, simple and free of excesses of emotionalism or irrelevant detail. From beginning to end, all elements must be integrated and the resulting sense of harmony should reassure and satisfy the audience.

The Hollywood style takes advantage of the compact people make with the filmmaker when they pay their ticket price. They willingly want to ‘suspend disbelief’ (see page 135). Deep down, people know it is tomato sauce, but they really want to believe it is blood. In a conspiracy with the audience to make movies believable, classical Hollywood narrative has developed the following features.

Three-act narrative. Hollywood plots are set out according to the three-act structure of orientation, complication and resolution (see pages 138-9). A situation is presented, a disruption is introduced, and then the resolution ties everything up in a strong closure. Life is not so simple, of course, and actual events rarely have such neat starts or finishes. Even so, the word realism can be applied to Hollywood style because it is based on classic literary narrative realism.

Objective storytelling. The audience in a Hollywood film knows more than the characters do. We are able to see what is happening in other places at the same time, and we can see what other characters are doing. In this respect we are god-like – we can see everything! This makes the style of storytelling objective, according to film academics David Bordwell and Kristen Thompson. It also allows us to accept simultaneous time or parallel editing (see page 25).

Character driven. The American style of cinema is almost exclusively concerned with individual characters (and stars). This contrasts sharply with the Soviet montage style of filmmaking. The objective of the Hollywood movie is to relate what happens to the characters and whether or not they got what they wanted. The films have strong individual characters who struggle to fulfil their hopes and goals. These characters are arranged in a hierarchy, from hero or protagonist (see page 141) to antagonist and then down to minor characters and supporting cast.

Mise-en-scene. One of the most important aspects of Hollywood style is the mise-en-scene (see page 17), whose sole function is to manufacture realism.

Time and space. American movies have a strong sense of movement – either through time or through geography. The story movement through time most often follows a straightforward line of episodic events. Flashbacks or flashforwards may be used, but the overall linear direction is strongly maintained. Whether through time or space, movement is totally subordinate to the action, say Bordwell and Thompson. Only the bits that are important to the story are shown.

Classical continuity editing. A typical feature film has between 800 and 1200 shots. Editing is designed to render all these shot changes invisible or imperceptible. Editing in the invisible style serves to hide any jumps or discontinuities that would alert the viewer to ‘non-reality’. Following are some of the features of continuity editing (more detail is provided in chapter 2):

• Shot progressions in the classical Hollywood style – ELS, LS, MS, CU
• Continuity cutting – for example, cutting on action or movement to distract the viewer
• Matching techniques to hide cuts – for instance, eyelines are matched
• Transitions such as dissolves smooth the remaining joins where necessary
• Simultaneous time or parallel editing (crosscutting)
• Application of the 18O degree rule
• Use of three-point lighting to naturalise appearances
• Use of music is subservient to the story – it just reinforces the meaning. 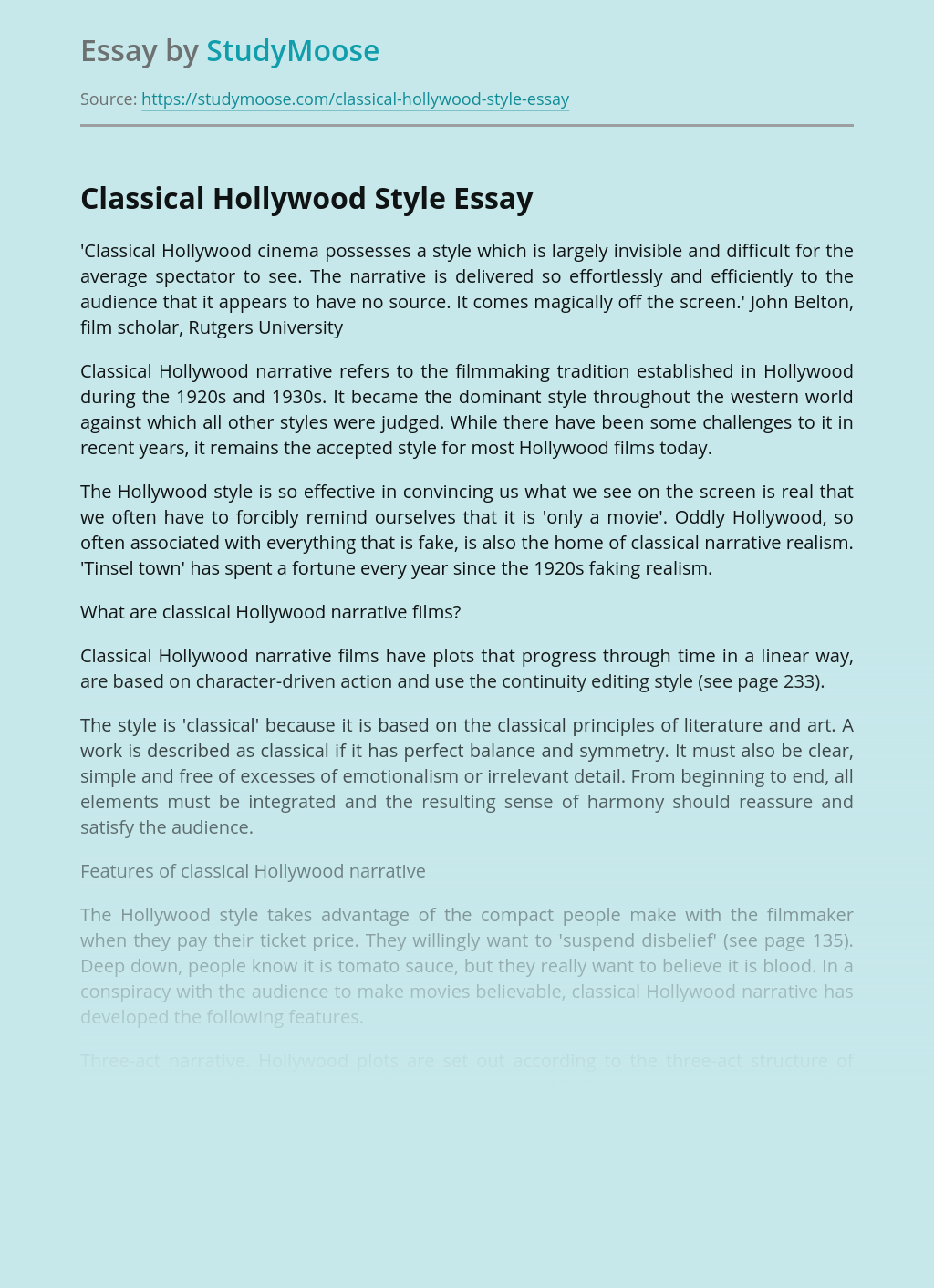 The movie Gran Torino, is a movie that is based on an old neighborhood which was mostly American nationalities living there. Through the years this changed and it became an Asian society to live in. This movie was directed and produced by Clint Eastwood, which we has also one of the main characters in the... VIEW ESSAY

1. How does Hitchcock introduce us to the two principle characters? Where do the scenes take place and how is the camera placed? In the case of Alicia Huberman (Ingrid Bergman), her father’s prison sentence leaves her skeptical of others, yet longing for a new companion in her life. She has a reliance on alcohol... VIEW ESSAY

View sample
Get Essay
Boys will be boys

Boys need care and support also when they are growing up, but it seems their behavior is required more rigidly. When boys come to the age of 10 or 11, they are required to behavior like a man. A boy who is scared in the dark or left alone at such a young age will... VIEW ESSAY

I admire movies and cannot live without them. Some movies taught me important principles in my life, some created memories that will never get erased and some made me laugh so hard till I cried; that is why I love movies. However, there are several movies that I watched, but I do not remember their... VIEW ESSAY

Donnie Darko is an intelligent, yet delirious and emotionally-ill teenager, who’s idealistic fantasy of correcting the wrongs in society, finally appears possible in a ‘tangent universe’ (an imaginative reality), where he is guided by an imaginary friend Frank, who appears as a malevolent giant bunny in Donnie’s day-time hallucinations. In the early stages of the... VIEW ESSAY