In the field of psychology, as the father of psychoanalysis, Sigmund Freud affirmed and asserted that individual patients could benefit from an analysis of unconscious dynamics that included neurotic conflicts, dreams, wish fulfillment, and other mechanisms of the life of the self. Besides this, Freud also believed that psychoanalytic theory could be applied to elements of social and cultural life in such a way as to gain enlightenment. This paper would discuss and evaluate the methods and concepts that Freud built into the psychoanalytic theory.

Don't use plagiarized sources. Get your custom essay on
“ Freud’s Psychoanalytic Theory In The 21st Century ”
Get custom paper
NEW! smart matching with writer

Quite often, the Freudian patients had difficulty recalling this childhood event. Freud, by use of free association would encourage them to remember the event from there past and so the patient could come to terms with it and hence recover from his neuroses. Another method was the interpretation of dreams in which Freud outlined his theory of the mind. A further discovery was transference, where the patient projects his feelings on to the therapist. Methods of hypnosis were originally used by Freud to find the cause for anxiety, but he dismissed them as being too inaccurate.

Freud’s theory of psychoanalysis, however, does have its problems.

Sigmund Freud’s Psychoanalytic Theory is often regarded as the most comprehensive personality theory and the first in its area of study to theorise human behaviour but through the ages Freud has raised numerous debates on whether his theory of human behaviour has been more controversial or influential. In this essay, I will argue that the Psychoanalytical Theory made a significant contribution to the field of psychology by critically evaluating how Freudian ideas influenced subsequent theorists. Furthermore I will discuss its relevance in the 21st century whilst not neglecting to highlight the reasons why Freud’s Psychoanalytic Theory is criticised as a personality theory. In the Psychoanalytic Theory, Freud structured the personality into three levels of consciousness, namely the conscious, preconscious and the unconscious. Amongst these three Freud is commonly known for “discovering” the unconscious and it became the core element to Freud’s theory. Freud further defined the structural elements of the psyche (the id, the ego and the superego) (Meyer, Moore & Viljoen, 2008:52).

One of its drawbacks is that it is based on the assumption that repressed conflicts and impulses do in fact exist. Today this assumption is being challenged, and is provoking intense debate. Freud first developed these methods of psychoanalysis when he met with patients whose disorders did not make neurological sense. A patient, for example, may have suddenly gone blind. The problem is that there is no damage to either of his eyes. Freud began to wonder if this disorder might be psychological rather than physiological.

A patient not wanting to see something that aroused anxiety might have caused his own blindness, he hypothesized. Freud also believed that dreams were an important way of getting into the patient’s subconscious. By analyzing dreams, he could reveal the basis of conflict within the patient. Freud believed the mind was made up of three main parts: the conscious, the preconscious, and the subconscious. The conscious region is the part that people are most aware of and what others can see. The preconscious region holds thoughts and feelings that a person can become aware of but that are mostly hidden away.

The subconscious region consists of thoughts and feelings which are completely hidden away and which one is mostly unaware of. Some believe that the preconscious region is really a small part of the much larger subconscious region. Although the person is not fully aware of these feelings, he still expresses them in disguise through the way he makes his choices. Using psychoanalytic methods, Freud was able, he said, to learn what feelings the patient had blocked and hidden in his subconscious.

These components of Freud’s theory remain important since they are still to some extent used to explain how the human psyche functions. It is evident that Freudian ideas of the unconscious laid the foundation for future personality theorists such as Carl Jung who’s Analytical Theory too focused on the unconscious mind (Meyer, et al., 2008:95). Another personality theorist Freud influenced is Erik Erikson who was an Ego Psychologist. Psychologists in this area of study elaborated on the ego which was originally theorised by Freud. Erikson’s theory is regarded as one of the most useful psychological theories and several concepts formulated by him such as psychosocial development, ego strength and identity crisis are part of our everyday vocabulary today (Meyer, et al., 2008:95). It is clear in my above examples that Freud did influence subsequent theorists whose theories are still relevant in the field of psychology today.

Certain concepts of Freud’s Psychoanalytic Theory are still relevant in the 21st century such as dream analysis, free association and defence mechanisms. These psychotherapy techniques are being used and expanded upon in modern day clinical psychology. According to Hurd (n.d.), Freud is the most popular dream theorist known today, and his ideas are still drawing water a century after he wrote his magnum opus: The Interpretation of Dreams. Freud stated that dreams are a result of our repressed desires and that they have more meaning to them than we acknowledge. He believed that dreams were the portal to our unconscious and that through analysing a person’s dreams a therapist could effectively treat the patient’s illness.

Furthermore, study of memories also shows that willful blocking of memories is unlikely, as the more people try to forget painful experiences, the more they remember. Although his theories have been subject to criticism from his contemporaries and from later generations of specialists in the workings of the human mind, Freud was a giant of our age whose ideas set in motion a burst of experimentation, theorizing, investigation, and discovery. Freud is justifiably described as the father of modern psychology, as he was responsible for the birth of an entirely new way of thinking about the mind.

To find the evidence for the concept that a dream is a wish fulfillment we must go back to the beginning of psychoanalysis. Freud was of course the founder of Psychoanalysis and the basis of many of his theories can be found in his work ‘The Interpretation of Dreams’. So therefore it is important to study his opinions and theories first as a basis for the premise that all dreams represent wishes. Indeed it was Freud who first put forward this theory and is only there for others to agree or disagree. However Freud was not sure when he wrote the Interpretation of Dreams whether a dream was a wish fulfillment and only that.

He speculates in the book whether this was just one of the many different types of dreams which represented different facets of each individual’s psychological makeup and whether he was basing this judgment solely on the Irma dream and his analysis on that alone. Freud was well known for changing and revisiting old texts and ideas and constantly updating them and changing them. Within the text he poses many questions, whether material for the dream was gathered during the day or were just psychological stimuli being used by the unconscious mind. Freud uses simple examples to demonstrate wish fulfillment in dreams.

This is because he does not want to get bogged down in the wildly extravagant dreams that can lead to many interpretations and opinions suggested. He gives a number of interesting examples such as the women who dreamed of having her period. Freud ascertained that the women dreamed of that because she would miss her period. The reason being, she was pregnant and she wished to announce it and the dream was a clever way the unconscious found to announce it. He also uses examples of children’s dreams to demonstrate his point. He does this, he argues, because a child’s psychological makeup is less complex than an adults is.

With Freudian thoughts on dreams in mind, several current neuroscientists are uncovering the possibility that dreams play a role in childhood learning (Hurd, n.d.). Furthermore, Freud’s relevance in the 21st century is that his concept of defence mechanisms is still seen in other theories of psychology today. This is supported by Cramer (2000) which states that developmental, personality and social psychologists have all found evidence for defence mechanisms. Freud saw defence mechanisms as a strategy with which a person could deal with their anxiety and unfulfilled desires. Some of the most common defence mechanisms which have integrated themselves into every day speech are terms such as regression, sublimation, denial and projection.

Through the ages we have absorbed more of Freudian idea than we thought, but it is impossible to avoid Freud’s shortcomings. The most controversial aspect of his theory is based on the fact that he placed emphasise on the sex drive being the primary motivating source for human behaviour. Freud focused too exclusively on sexuality and not enough on interpersonal and social conditions. He was also criticised for his view on female development with regard to the Electra complex in the phallic stage. Furthermore the Psychoanalytic Theory was criticised since it was seen as vaguely defined and lacked any empirical research.

In conclusion, despite his shortcomings Freud’s Psychoanalytic Theory has made an important contribution to the field of psychology through being a catalyst to the thoughts of subsequent theorists. Freud’s most valuable contribution to society is his theory of the unconscious mind which is still being expanded on today. Furthermore his contribution to modern day clinical psychology psychotherapy approaches cannot be ignored. A testament to the validity of Freud’s theory is that it is even today being debated many years after his death and the debate is not close to being concluded. Therefore he is relevant in the 21st century since his ideas have percolated through generations and subsequent personality theories. 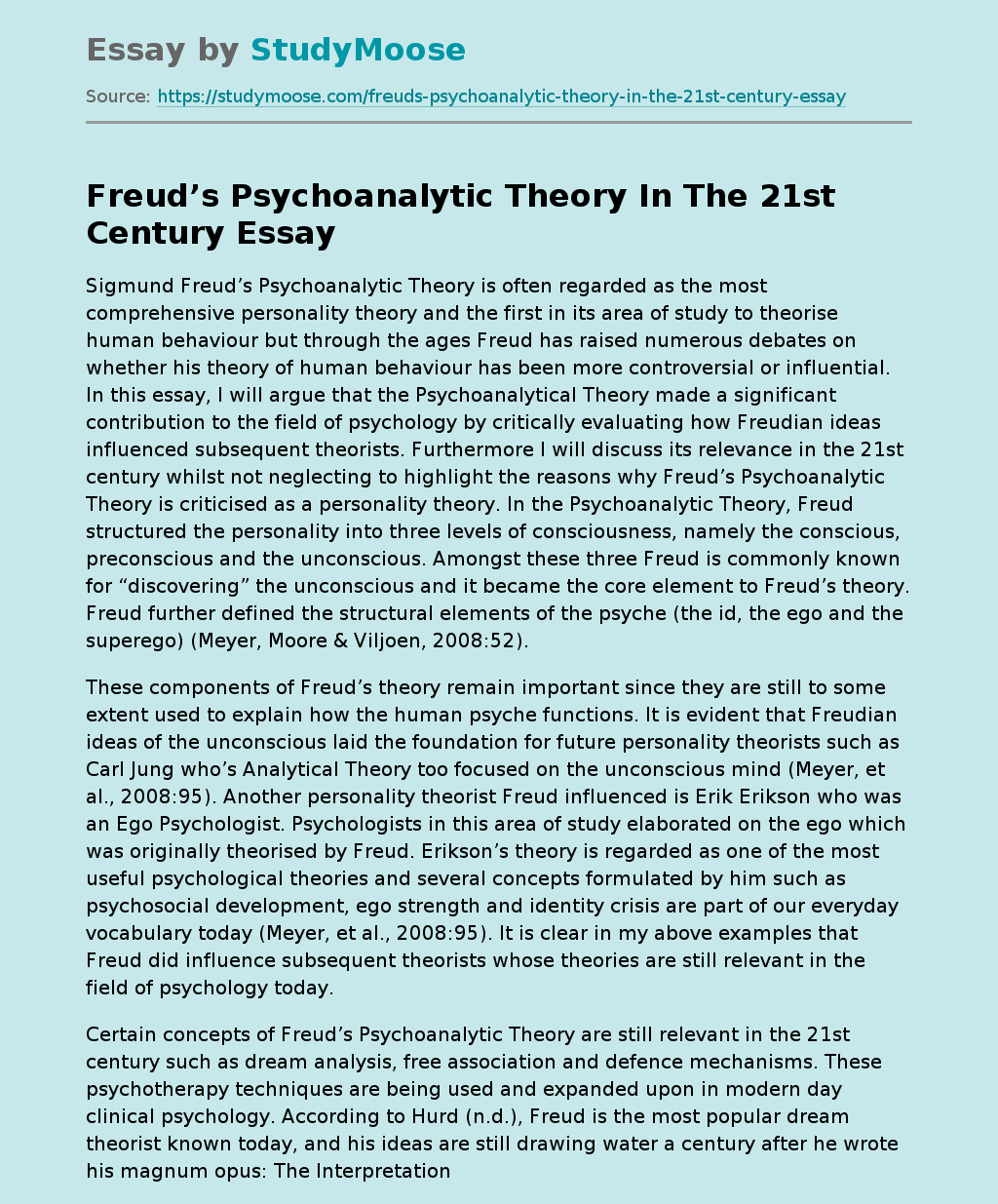