From the psychoanalytic perspective, all techniques are designed to help client gain insights and bring repressed material to the surface so that it can be dealt consciously.

Looking at the symptoms such as anxiety attacks, overeating, fear of accomplishment, fear of abandonment, and so forth—can be interpreted as outward manifestations of unconscious conflicts that have their origins in childhood experiences and defensive reaction to these experiences that are necessary to her as a child.

Don't use plagiarized sources. Get your custom essay on
“ Case of Ruth ”
Get custom paper
NEW! smart matching with writer

Ruth is experiencing a split—a struggle between opposing dimensions of herself. This conflict is between the part of her that wants to change and the other part of her that clings to old patterns that were once necessary and have helped her maintain mental stability all her life.

In reality, Ruth appears to have superficially avoided normal rebellion and have suppressed her sexuality except for adopting a wifely role with the first man she dated.

Although she followed the format of using her mother as a role model and having children by an acceptable husband, she apparently abdicated in the struggles of sexuality, rebellion, and identification, leaving these conflicts unresolved. Her conscious recollection of her parents’ are of a rigid, fundamentalist father and a critical mother and these may had affected her as a child, a wife, and a mother also. Ruth was socially isolated and that her lack of relationship outside the family was enforced by her parents, at least in terms of dating.

Her reaction to her daughter Jennifer may very likely be related to her own failure to rebel.

A Freudian view of her father’s harsh reactions to Ruth “playing doctor”—would emphasize the Oedipus/Electra aspects of this father-daughter encounter. Ruth internalized her father’s overly negative attitudes to sexuality. Her early training by her parents clearly made individuation in the object-relations sense—a very scary proposition for her; hence, an attempt toward individuation is anxiety provoking. Ruth’s symptom of overeating probably gratifies her need for affection. Her weight problem also has a psychodynamic meaning. Being over-weight may lead to her feeling sexually unattractive, and therefore less likely to be faced with dealing with her sexuality.

Ruth’s Personality according to Sigmund Freud

The unconscious is an important determinant of human emotional responses and decision making. This assertion is central in Freudian psychoanalytic theory and has been strongly supported by empirical research. Ruth’s symptoms suggest compatibility with psychoanalytically oriented therapy. Ruth—“playing doctor”—would emphasize the Oedipus/Electra aspects of this father-daughter encounter. Ruth internalized her father’s overly negative attitudes to sexuality. Her early training by her parents clearly made individuation in the object-relations sense. Oedipus/Electra feelings by both parent and child are considered part of the normal development.

An Adlerian Approach to Ruth Case

The Adlerian approach focuses on assisting clients to better understand how they perceive themselves, others, and life and to better appreciate their strengths and assets while avoiding the counterproductive perceptions and behaviors that have led to the development and maintenance of symptomatic behaviors in their life.

Ruth feels pulled by both worlds; she is experiencing a conflict between satisfying her needs in the occupational life tasks and her needs in the family—intimacy life tasks. She also wanted to perform perfectly in both worlds. Even though part of her knows that the demand for perfection is impossible, she has not let herself off the hook. Mostly, she wants everyone involved in her to be happy with her and, above all, to avoid displeasing anyone. Ruth has put everyone else in her life first.

Ruth is the oldest among four siblings, raised in a family where hard work and perfection were expected. Ruth believes that she is the one who is most affected by her unhappiness. The family atmosphere is strict and controlled, and she found her place by caring for children and others in a way that she believed women were supposed to do.

Ruth’s personality according to Adlerian Therapy

Ruth’s case generates a clear picture of the client in relation to what Adler called the LIFE TASKS of (a) Friendship and social relation, (b) work and occupation, and (c) love, intimacy and sexuality.

Ruth is especially attentive to how she views herself, including aspects that are evident and those that are implicit and unclear but forming. Several components of Ruth’s self-concepts emerge from her autobiography. In her own words, Ruth identifies herself as the “good wife” and the “good mother” that her husband expects from her. Thus, she strongly identifies herself with the roles of wife and mother but she defined and attempted to fulfill these roles in the image her husband wishes. Until she was 30, Ruth identify and value system here strongly influenced by the fundamentalist religion of her parents, especially her father. She feared that she would not be rejected by her parents if she did not live up to their expectations of who she should be.

Ruth’s self-concept is more peripheral. An important clue to her self-concept is the view she has to her body and it’s many symptoms. However, she defines herself, it is important to realize that the self is embodied, that is contained in and function through a body. Thus, an essential part of her sense and feels about her body. At present she views her physical self as overweight and unattractive. A large part of Ruth’s manner of being is dominated by fear of panic, and a sense that many daily life events and ongoing concerns are overwhelming. Ruth’s dissatisfaction with her need for approval is being evident.

Ruth’s personality according to Person-centered therapy

From a person-centered perspective, counseling is directed at more than merely solving problems and giving information. It is primarily aimed at helping clients tap their inner resources so they can better deal with their problems, both current and future. The goal of this therapy in accordance to Ruth’s case is to create a therapeutic climate that will help Ruth discover the kind of person she is, apart from being what others have expected her to be.

As Ruth presents herself, it is obvious that she has not been able to satisfy her basic needs except her need for survival. She does not feel that she has love, power, fun, or freedom in her life, and her choices of anxiety and panic are her ways of expressing her extreme frustration. These symptoms are Ruth’s way of saying “Help me!”.Concept of Human Nature In reality therapy, Ruth needs someone who will listen to her and not criticize for what she says. It is important for Ruth to learn about her basic needs. She needs to work on her marriage and improve the relationship with her husband.

Ruth’s personality according to Reality Therapy

It is important that Ruth accepts herself, because in reality therapy you are choosing your actions and only you can change what you are doing.

A-B-C Framework
A= Activating event: Ruth husband John doesn’t show affection towards her. B= Belief: If someone doesn’t show affection or attention to Ruth she/he doesn’t love her. C= Behavioral/ Emotional consequence: Can’t talk to john, feelings of loneliness and fear of losing her marriage. D= Intervention: Therapy concentrates on changing the faulty belief of Ruth that if she doesn’t get attention she is unloved. E= Effect: Ruth understands that John’s behavior doesn’t mean that he doesn’t love her anymore. F= New feeling: Ruth feels sad if John doesn’t show affection towards her, but she no longer feels unloved because of that. Ruth’s other faulty Beliefs and attitudes:

Fear of changing and being abandoned and alone.
Guilt
Choosing not to apply for the job and stay at home, continuing to be a good wife and a good mother. 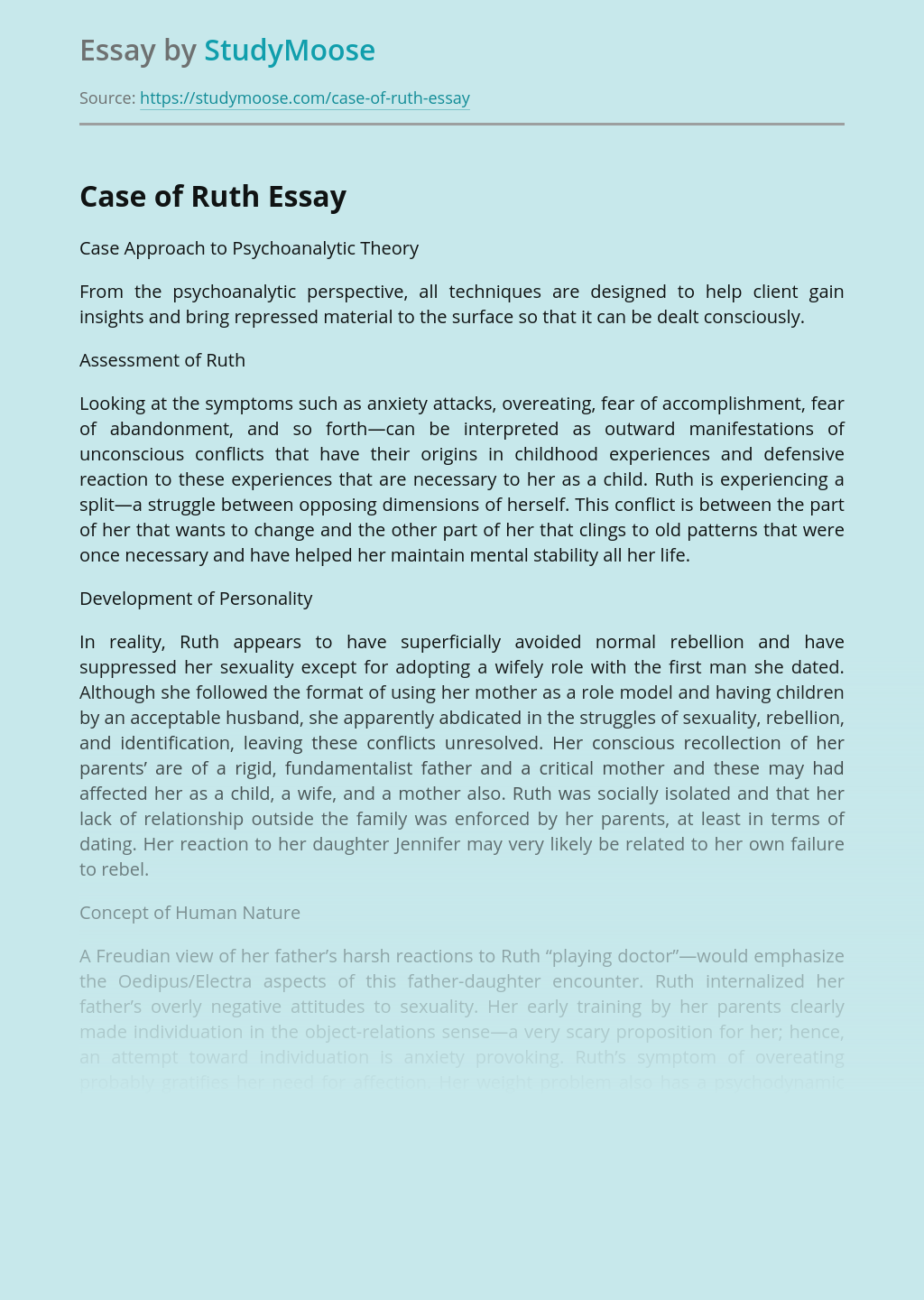