40% of the food America produces is wasted.1 Have you ever thought of how much food you waste a day? The average American wastes about 250 pounds of food every year.2 That’s about $600 dollars worth of food.3 Imagine what you could do with $600.00. No one notices what is in the back of their fridge or what goes into their trash can. Before you say that you don’t do that, think back to a moment when you had the chance to take the restaurant food home, but you declined it because you were too full.

Don't use plagiarized sources. Get your custom essay on
“ Food Waste in America ”
Get custom paper
NEW! smart matching with writer

Now, imagine thousands of people doing that every day. Tons and tons of food is wasted. Over 33 million tons of food is wasted every year in America. 4 That is enough to fill a 90,000 seat football stadium to the brim with food over 120 times.5 We waste so much food that our food waste could power Switzerland for an entire year. Americans should lower the amount of food they waste by taking home extra food from restaurants and buying appropriate amounts of food at the store.

Everybody has been to a restaurant before and not finished their food. Well, did you ever think about bringing it home to finish later? Most people don’t think like that, since they are full at the moment, and believe they won’t eat it later.

Give it a try and bring it home to eat it for a quick dinner later. Well, you might say ,“Oh well, I didn’t like the food.” There is nothing  wrong with that. If you don’t like the food then, you don’t like it. I’m not going to argue with that, no one likes to eat everything in the world. All I’m saying is open your eyes and notice how much food is being wasted at restaurants. Restaurants are America’s food source.

We go to restaurants when we don’t feel like making dinner.​ The average family goes to dinner around thirty five times a year. So, let’s say you waste on average five ounces. of food every time you go to dinner. That’s about ten lbs. of food wasted in one year just by going to restaurants. Now, let’s add your family into this. If you have a four member family that would be forty lbs. of food wasted by your family. That is equivalent to around forty plates of food being thrown out, and you could have eaten half of that at home. The moral of the story is that if you reduce the amount of waste at restaurants, you can make a big difference in lowering America’s waste percentage.

The average American family spends about $8,513 on groceries a year, and wastes about $600 of that food.6 Basically, the average American family wastes about fourteen percent of the food they buy. Families are wasting way too much food. My generation has grown up with this, so it’s all that we know. It is very hard to extinguish a bad habit. Have you ever heard of the saying, “Your eyes are bigger than your stomach?” That is actually very true. Have you ever seen people unload their food from their cart at a grocery store? I have seen people have so much food that they have to get another cart. That is just ridiculous.

If you have a big family, that’s fine; but if you only have two to four people in your family, then you are purchasing too much food. There are simple ways to not overspend at a grocery store. One way to not overspend at a grocery store is to make a grocery list or  have a leftover day. Have a leftovers on Wednesday or Sunday. Not everybody does this, but no one is innocent. most people have overbought amounts of food at some point. Maybe you ate the food ,maybe you didn’t. It is important to think before you go along buying more food than you can handle. This goes right back to the saying, “your eyes are bigger than your stomach.”

Taking home food from restaurants and buying appropriate amounts of food at your local grocery store is a great way to lower food waste. America has the largest waste percentage in the world. That is not anything to be proud of. Do you ever think about how much food you throw away in a month? Food waste is a big problem in America, It could be lowered by just doing a couple simple of steps and by thinking before you throw away something that could be eaten. Food is meant to be eaten not wasted. 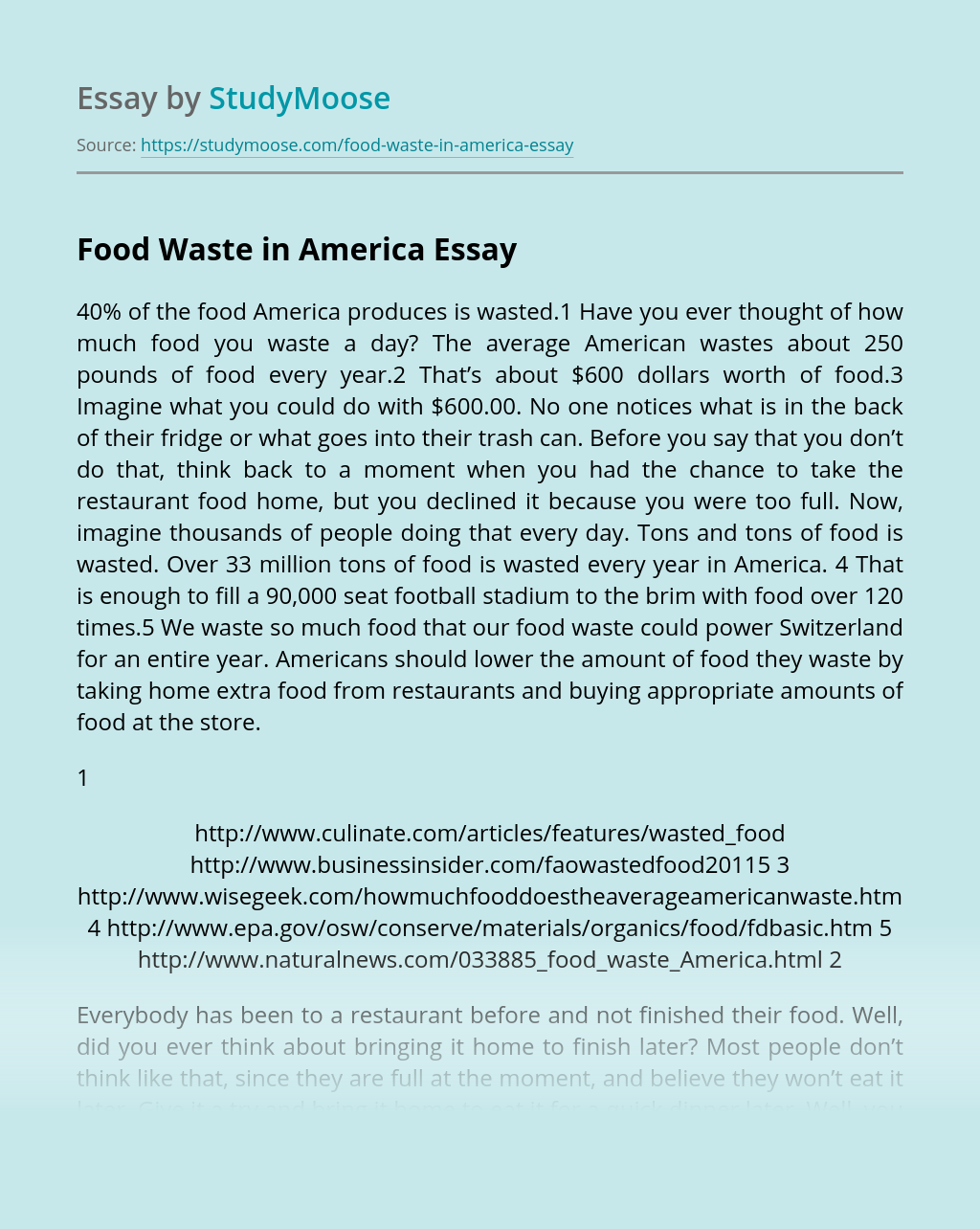