Meaning. A term that we as human beings throw around on a day to day basis without so much as giving the term a second thought as to what it actually refers to. In consideration of the true definition of meaning, many ideas arise. Meaning can be defined as an innate reality of a non-physical nature, in the relationship between a symbol or representation and to what it refers to, be it road signs, or logos of a company, to further provide insight into an idea or concept or to communicate something more effectively and efficiently to a wider base of linguistically diverse people (pp.

Don't use plagiarized sources. Get your custom essay on
“ The focus of this paper is on the meaning in life and the importance of sociality and perceived purpose in life and events ”
Get custom paper
NEW! smart matching with writer

A simpler definition is that meaning can refer to the understanding we derive from communicating either verbally or non verbally with one another. The definition for meaning in life however is a completely subjective association dependant on the individual in question and the experiences which they encounter throughout their life (Kaler, 2006).

In other words, there is no single universal definition for meaning in life that can fit into every person’s life as individuals attach different notions and meaning to their life and the elements within.

The focus of this paper is on the meaning in life and the importance of sociality and perceived purpose in life and events, exposure and experiences that can heighten the sense of meaning in one’s life. The paper also reflects on the notion that meaning in life is different at different developmental stages in the life of the same individual.

Many researchers have taken to exploring this particular area to understand what exactly creates meaning in life.

Having a purpose means that the actions and events that an individual engages in at a present time are perceived to lead to a particular outcome in the future (Stillman et al. , 2009). Be it financial success, intellectual prowess, altruistic devotions towards the underprivileged community or religion, starting and enjoying the progress of a family, sustaining pleasant relationships, simply enjoying life through indulgence or even on a larger scale, aspiring to change the world (Kaler, 2006; Stillman et al. , 2009).

To complement this purpose in life, we as humans, depending on the individual, attribute several yardsticks to measure meaning in life; wealth, social status, health, occupation and so on. Regardless of the diversity of our purpose or goal in life, one of the key factors that adds meaning to our life remains universal; sociality (Stillman et al. , 2009). This importance of the notion of sociality was demonstrated in a study conducted by Stillman et al. (2009) in which a group participants were purposefully ostracised whereas another control group were interacted with normally.

This resulted in the group experiencing social exclusion to report life to be less meaningful when compared with the control group. In the writers’ experience, sociality has been a key factor in heightening a sense of meaning in life. The social relationships that the writer has strived to maintain since graduation from high school and the relationships that have been established since then; with teachers, fellow class and university members, sports team and musical group members and colleagues from employment places – have added value and meaning in life.

In retrospect of school days, the memories seem more fulfilling and joyful as a result of the high level of sociality experienced at school and the ability to collectively reflect on such memories with the persons with whom those events occurred with. Prior to the writer joining the high school from which they graduated, the writer was attending a different prep school with a much larger student body and was not engaged in any extracurricular activities.

This hindered the experiences as well as degree of pleasantness in memories that the writer has made from that school as the level of personal social interaction was much more limited in terms of the number of close friendships one kept. This can also suggest that the meaning in life and what it encompasses differs at different developmental stages for an individual (Steger, Oishi & Kashdan, 2009). In a study conducted by Steger et al. (2009), four developmental stage groups were asked to report their perceived meaning in life. The four groups included emerging adulthood, young adulthood, middle-age adulthood and older adulthood.

It was found that the older adulthood participants reported a greater sense of meaning in life particularly when compared with the emerging adulthood participants. This suggests that as one progresses through life, the sense of meaning in life is enhanced through experience. Once again in the writers’ experience, during the early adolescent stages, simpler activities heightened the meaning in life; watching a favourite cartoon, returning home from school, completing the studies to a more than satisfactory level, spending time with fellow classmates, ending a school year and starting school holidays and so on.

As stated previously, this is as a result of the purpose in life at the time being a much simpler one such as to do the studies exceptionally well to move on to the next year level. However in later adolescent times and teenage times a clear shift in the purpose and goals in life were experienced as a result of the different stage in development or the previous purpose having been attained. The heightened demands of time and energy can contribute to these shifts in purpose through developmental stages.

Finding a job to earn some money to go on a holiday with friends, sharing the same passions with a close friend or sometimes even buying one’s first car, make the meaning in life much different in terms of context later on in adolescence than in youth as a result of the experiences of success and failure at school or within teams, the experience of graduation with fellow students and so on. Sometimes in life individuals can have multiple purposes as opposed to a single purpose, which complement each other to make the experiences and expectations in life more meaningful.

Once again, in the view of the writer, completing her tertiary education to the highest level and earning a job and career that would allow for them to gain financial means by which they would be able to best afford her children support in terms of education, living and their own goals, would be another purpose in life. The importance of finding meaning in life has been proven to be extremely important as simply going through life without meaning would imply that someone is merely existing in life as opposed to living life.

Failure to find and seek meaning can in some cases even result in severe psychological distress (Kaler, 2006). This has been demonstrated by research conducted by Cohen & Cairns (2012) in which they found that individuals reported higher levels of depression were linked to the process for finding meaning in life when compared with individuals who reported to have already found meaning in life. There are many practical steps that one can take in order to ensure that they sustain a heightened perceived meaning in life.

By having realistic attainable yet challenging smaller goals which lead to a bigger goal, an individual is ensuring that they take the necessary measures to maintain a strong focus on the larger ultimate goal whilst making it seem more attainable as well as fulfilling. Another method to improve the meaning in life is to ensure that the social groups which one is part of consist of personalities that are complimentary to the individuals’ personality and attitudes.

For instance, this means that a person who is usually positive and optimistic either surround themselves with people with similar characteristics, or if they do have social relationships with someone who is continuously negative or pessimistic, ensure that they either take steps to help that person become more positive and optimistic or be strong enough to deal with the characteristics of the person without letting that pessimism and negativity influence their own positive attitudes.

In summary, meaning in life is a subjective association between the values and notions that one attaches with one’s lives and the elements within one’s life. Having a purpose in life and taking the necessary incremental steps in a progressive manner however, can heighten the sense of meaning in life. Having effective social relationships can add meaning to life as well. Ultimately, having an elevated sense of meaning in life can make life and the elements within seem more fulfilling and pleasurable and can essentially assist the individual in facing uncertainties in life and in the future.

In the writers point of view, having strong social relationships as well as a clear purpose and goals for achievement in life have heightened the sense of meaning in life and with progression in terms of development, social acceptance, educational achievements, financial independence the sense of meaning in life seems to escalate as a result of different experiences encountered within life.

The focus of this paper is on the meaning in life and the importance of sociality and perceived purpose in life and events. (2020, Jun 02). Retrieved from https://studymoose.com/focus-paper-meaning-life-importance-sociality-perceived-purpose-life-events-new-essay 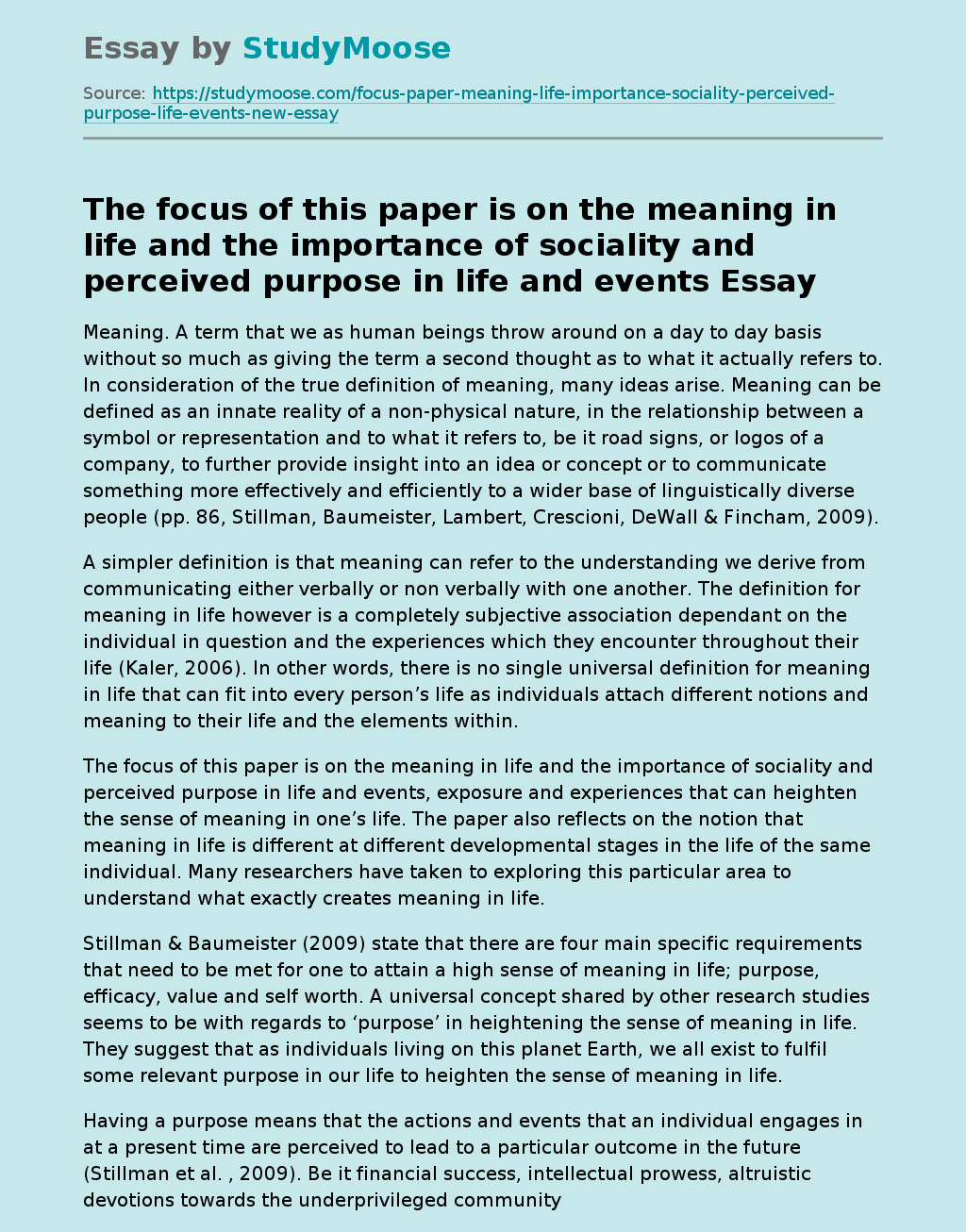