What is the meaning or purpose behind the TV show Family Guy?

The purpose of the show, Family Guy, is to use irony and humor to highlight issues in today’s society. Family Guy, created by Seth Macfarlane, is an adult animated show that highly demonstrates satire in a comical way. Along with the humor, the show contains many different examples of fallacies. Family Guy is a great example of satire comedy that displays many examples of ethos, pathos, logos, and irony.

While there are numerous examples of satire humor in this show, one specific example of this would be in episode 1 of the first season, “Death Has a Shadow”.

Don't use plagiarized sources. Get your custom essay on
“ What is the meaning or purpose behind the TV show Family Guy? ”
Get custom paper
NEW! smart matching with writer

In this episode, the show demonstrates how insurance agencies greed for money. Our government portrays our health insurance as more of a profit organization instead of having the best interest of people and our healthcare. Joe Swanson is a handicap police officer who experienced an accident in which he got paralyzed in. While in the hospital, the doctor called the police officer’s insurance company to notify them of the accident.

The insurance company said if they acted now, they could potentially receive treatment to get his movement back. But as the doctor explained, the treatment would cost $200,000. They also said that the wheelchair, in which only cost $60, would be covered by the insurance. In the show, this issue is portrayed as a just a joke, but in reality, it brings people to the realization about how our government is capable of manipulating us and also how they are more money-hungry that empathetic.

Insurance bills, surgeries, and healthcare costs can be very expensive especially in the United States. In other foreign countries, it cost much less to get the same type of medical attention.

Family Guy does not only portray examples of satire but also fallacies. A fallacy is what we know as, misleading or a faulty argument. In this specific example, a character named Quagmire who parties and is more of a highly sex-driven type of guy gets accused of statutory rape. In the show, he attempts to use an appeal of emotion in court. He does so by talking about his childhood. His father was in the military so he was never around while his mother was “promiscuous”. His attempt to get the judge and courtroom to feel bad for him did not work.

Family Guy displays ethos, pathos, and logos throughout the show. Brian in this show is looked at as one of the smarter characters along with Lois. With this being said in this show they would have the most credibility which plays a role in ethos. Lois would be the Character to use it the most due to not only her intelligence but also her role in the family being the mother and wife.

Pathos is not only in writing but also in television shows such as this one. This how plays a role in how we feel about characters or certain situations in the story. Pathos is an emotional appeal and you find that in this show when the family dog named Brian, dies. The baby of the family in this show, Stewie, and Brian are best friends and after Brian’s death, it gets very emotional for the other members of the family. While the rest of the family seems to get over it quickly, Stewie seems to take it much more hard than his siblings and parents. For “true” Family Guy fans, this episode was sad for them as well. In this episode, Brain had passed away around Christmas which made it worse for Stewie due to him no longer being in the Christmas spirit anymore. Zack Howe states, “Every heartbreaking note in this episode is poignant, a masterstroke proving that cartoons can have as much heart as any genre”.

“The Most Emotional Family Guy Episodes That Made You Cry.” Ranker, www.ranker.com/list/most-emotional-family-guy-episodes/zack-howe.

What is the meaning or purpose behind the TV show Family Guy?. (2019, Nov 28). Retrieved from http://studymoose.com/what-is-the-meaning-or-purpose-behind-the-tv-show-family-guy-essay 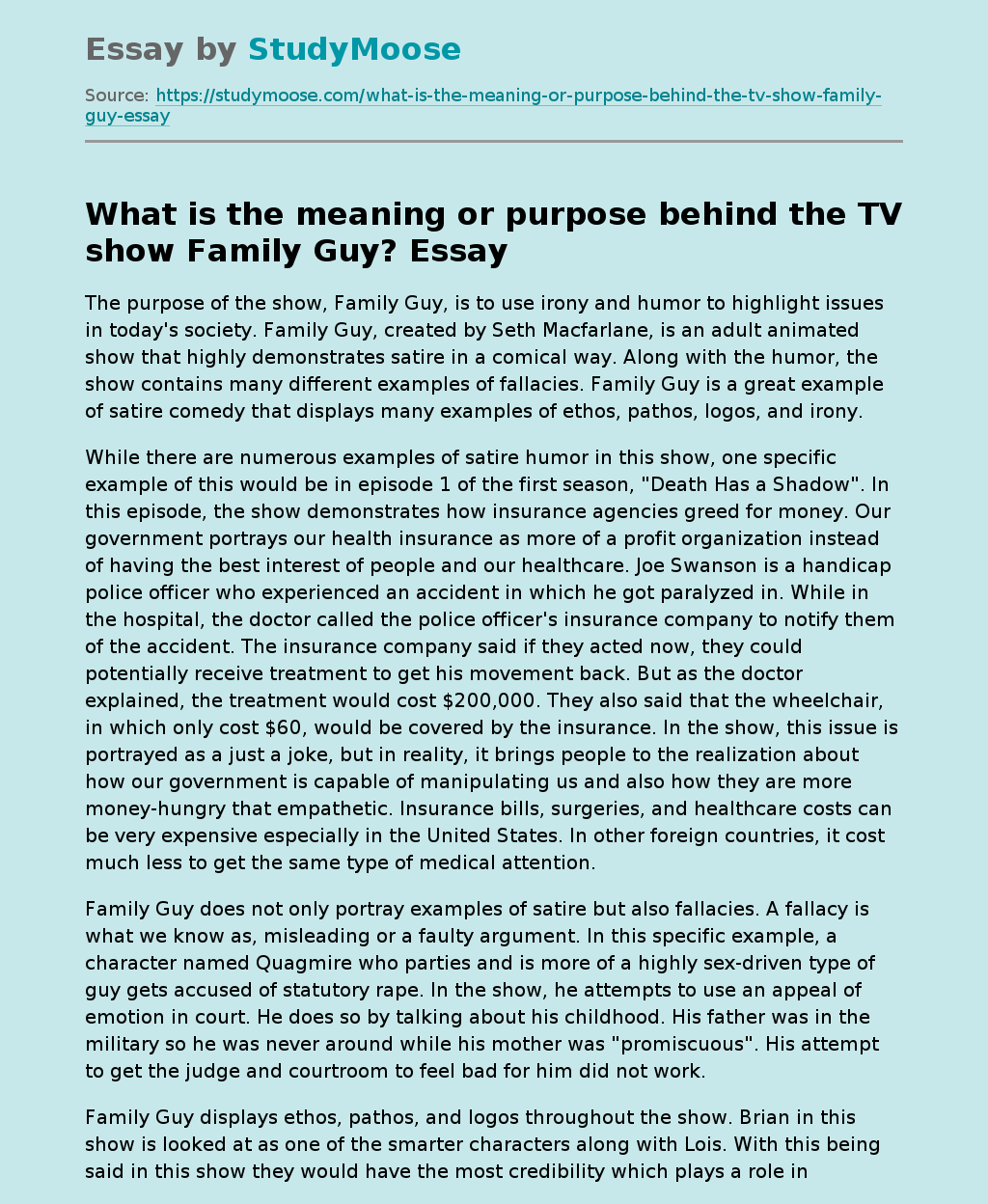