This analysis studied financial information of three multinational corporations in the retail industry, Ralph Lauren, American Eagle, and Gap. This examination is predominantly and analysis of Ralph Lauren and American Eagle, and it compares its financials and performance to that of Gap. In order to reach a decision on which firm my company should invest in; we recreated and cleaned both company’s financial statements followed by an analysis using key financial ratios and metrics. My company is searching for the firm that would be more profitable in the following fiscal years.

Don't use plagiarized sources. Get your custom essay on
“ Financial Analysis on Retail Industry ”
Get custom paper
NEW! smart matching with writer

After completing an in-depth analysis of these companies, we concluded that Gap would be the best investment for future growth in the industry of retail. Gaps sales growth may not be relatively high compared to other industry leaders but it is on the rise. Also the sales decrease can be related to the closing of stores and restructuring of international operations. This also relates to net income growth showing signs of regression in the past fiscal years.

Gap’s EBIT Margin and EBITDA Margin suggest that the company is healthy and also properly managed. These ratios show us that the sales growth and net income growth decreases are due to other factors in the business. Gap will show to be the right choice for our company to invest in as well as other industry research that we have done to help make this investment persuasive.

Case Write Up and Analysis
All three of these multinational corporations generate their revenues in the apparel: retail brand industry.

Gap is headquartered in San Francisco, California and the year-end date is January 30. American Eagle is headquartered in Pittsburgh, Pennsylvania and their year-end date is January 30. Ralph Lauren is headquartered in New York, New York and there year-edn date is April 3. To perform this case analysis to determine which company which is more profitable using key financial ratios and metrics accompanied with industry research and trends of the apparel retail sector. We have recreated and cleaned financial statements for Ralph Lauren and American Eagle, comparing both to Gap. Using these recreated financial statements, we have performed a case analysis of these three companies in order to find out which company was most profitable.

For apparel retailers, new fashion trends and steady flow of promotions will help a low single digits increase in sales in 2012. This is what you see with Gap and American Eagle they do not show major increases in sales growth but on steadily rising at roughly 5% in the three year trend. Ralph Lauren shows a jump of 7% which could be due to the luxury brand section of retail section because of the opportunities in emerging markets such as Asia and Latin America according to industry reports. American Eagle plans on accelerating growth through internet sales. This generates higher margins for the company, last year it accounted for 12% of company revenues. This trend is also apparent in the other two companies because most retailers want to offer the convenience of online shopping to customers. The online channel provides a cost effective way for retailers to widen their reach across existing and new markets. Gap intensified its international strategy as well, opening stores in Europe and China, and outlets; accompanied by an e-commerce platform in Canada, Europe, and China.

The company has 22% of sales from regions outside the US, up 7.6% from the year-ago period. This industry shows a thrust of penetration in the international markets looking to increase in the next few years. Teenagers also play an important role in the industry trends. With 7.1% of US population they have been a powerful force in retail with the leading beneficiaries being Gap, Abercrombie, American Eagle, and Urban Outfitters. This ties sales growth for both Gap and American Eagle due to a majority of the teen population shopping at these two companies. Helping increase sales growth and produce for revenues for the firm. The biggest window for opportunity in the retail sector seems to be the overseas markets but especially China, according to the S&P industry reports. Gap’s profitability has grown over the past three years showing larger EBIT and EBITDA margins which shows strong management and healthy earnings. Ralph Lauren is also growing profitably as well as their margins have increased with time. American Eagle has been on teetering between being profitable and running efficiently to stay in the game.

On the margin side of things Polo seems to be the best company, this is because they are a luxury brand which tends to have higher margins. This makes up for their lack of revenues because people buy less quantity of the luxury brands and tend to buy more of the standard products that are affordable and still have above average quality, such as Gap Inc. and American Eagle. The industry research showed that the recent drop in cotton prices will help retail companies enormously in profit margins. This will help companies such as Gap and American Eagle more than luxury brands like Ralph Lauren. This is shown in Gap’s trends in the past years for EBIT Margins; in 2009 they had 10.7% which increased to 12.8% in 2010; this is a 2.1% increase.

This increased another .6% to 13.4% in 2011, this can be projected to grow even more in 2012 with more drops in the cotton prices. Gap reported that two-thirds of their increases were in the drop in cotton prices. Polo has also seen increases in EBIT margins but not in such a drastic change. From 2010 to 2011 they had a .7% increase on EBIT margin and then slowed down to a .2% growth from 2011 to 2012. This is because they were less affected by the change in cotton prices. American Eagle showed a decrease in EBIT margins in 2012 with a change of -3.4%. This loss should not be as great as reported because in 2012 they had a loss on impairment of assets which is not a recurring expense. EBIT Margin3 Yr Trend

EBITDA margin adds back the expenses taken out from depreciation and amortization, two non-cash expenses. Adding back those two expenses increases both companies EBIT margins by 4-5% for the three years analyzed. Ralph Lauren’s EBITDA margins seem to be declining in the three year trend which could raise questions about their assets and property plant and equipment expenses being raised. On the other hand you can see Gap showing strong 1-2% increases in both EBIT and EBITDA. Another key metric of financial profitability of a firm is earnings per share. Ralph Lauren’s earning per share is $7.09, as they are a more profitable firm within the industry and do not have a lot of debt on their balance sheet, with little leverage, is the reason there earnings per share are consistent and usually higher than the other two firms.

Gap’s earning per share comes in at $2.05, they do not carry a lot of debt on their statements which means they don’t carry much leverage as well, giving them a decent earnings per share. They also repurchased stocks from the public which is another reason the earnings per share are moderately low. American Eagle had a earning per share of $0.96, this is due to the fact that they have more shares outstanding than their net income at the end of each year. They also carry no debt on their balance sheet so do not need to leverage themselves. EBITDA Margin3 Yr Trend

While analyzing financial leverage Polo has the most debt to equity on its balance sheets ranging in 8-9%. Compared to American Eagle and Gap which has little to no debt ranging from 0-1%. Gap has most likely paid of its debts from previous years and now rent their property and stores eliminating the cost of long term debt. American Eagle is very similar with actually 0% debt in the three year trend. Polo is a moderately leveraged company which brings on the additional risk of carrying debt, although can boost earnings per share for profitability.

We expect Gap to be the most profitable because they have high revenues, little to no debt, in good standing with creditors, and have good margins. This is better than Ralph Lauren because industry research shows that luxury brands will slow in growth while standard brands will continue to grow. Although Gap does not have the highest sales growth their market capitalization will help them succeed in emerging markets such as Asia and Latin America. Also with the decrease in cotton prices Gap is now able to have larger profit margins while keeping a lower priced product with the same quality. This increase in profit margins Gap will be able to generate the most amount of cash flow. With the trends continuing with their margins combined with the growth of new markets their cash flow will increase substantially.

Ralph Lauren has been noted so have some corporate social responsibility problems in Indonesia where they have broken up unions that have tried to improve working conditions. This issue as well as others should be considered because more and more people now a day are taking into consideration the companies CSR before buying their product. Gap Inc. sets a high standard for their manufactures to up hold health and safety standards. They admit that some places still do not follow these regulations but Gap puts in a lot of resources into fixing them or even terminating the business with them. This is good because they are socially responsible and are willing to terminate business to stay responsible. Most companies try to stay socially responsible by implementing certain regulations for working conditions in third world countries so they do not bad mouth their own firm. The International Labor Organization and United Nations try to keep them in check in order to protect people and the environment.

The information that we would like to request from senior management at each firm would be the growth forecasts and document containing information about international expansion. It seems apparent that international markets are
next big opportunity for the retail sector to increase revenues and income for most firms in this sector. This would help us invest in the company that will grow larger in the years to come as well as forecast numbers for potential growth which would help with our decision making process. 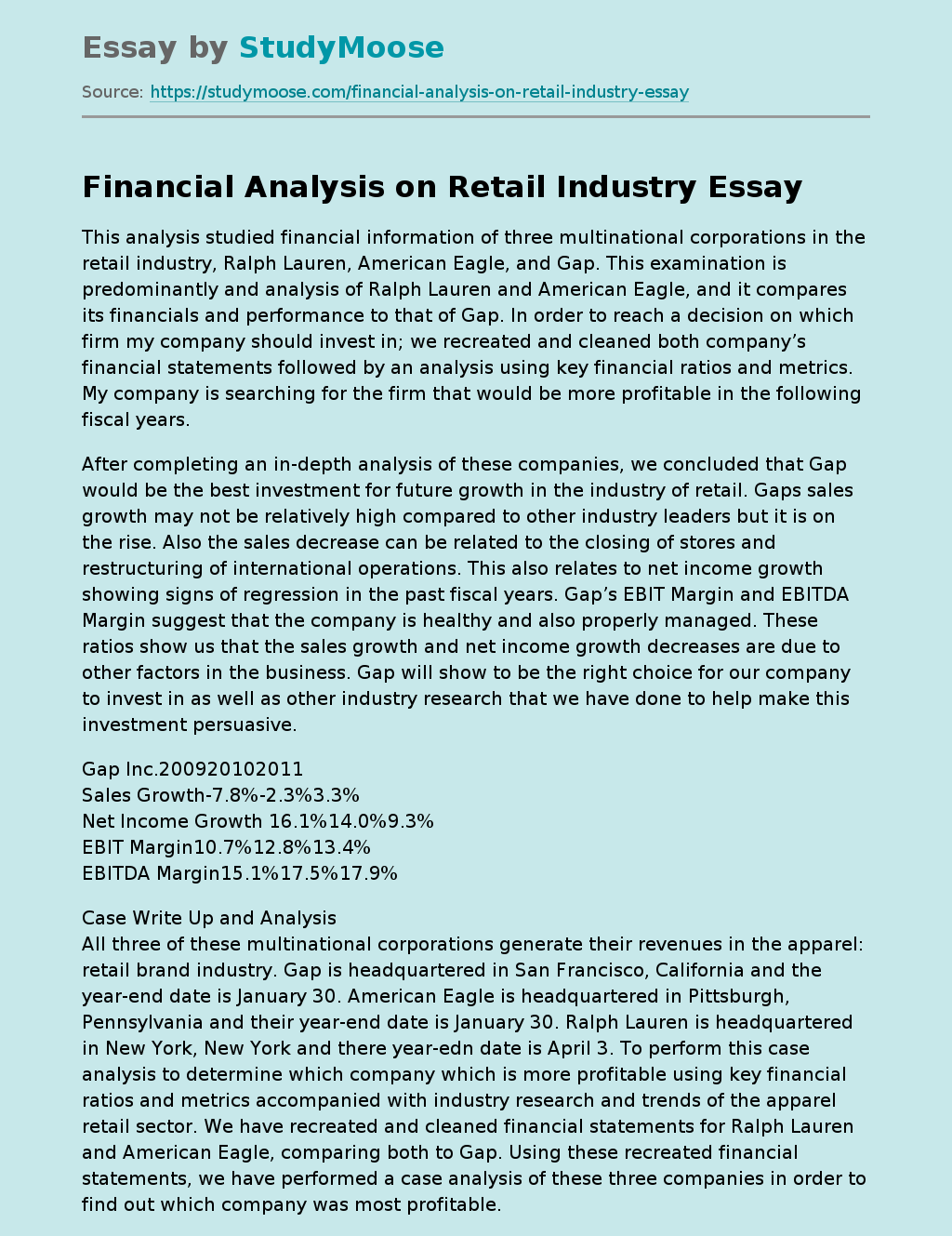