Corruption of Corporations in Oryx and Crake

In Oryx and Crake, Margaret Atwood illustrates a dystopian world where human beings and numerous hybrids organisms coexist. The setting is drawn in the future and Atwood foreshadows that some animals will go extinct and in order to fill up some gap in the food chain, human will have to fill the gap with modified organisms. Moreover, she suggests several interesting ideas about what she thinks might happen in the future. For example, she suggests that apocalypse will occur in the future and how our technology will be more advanced.

Turn in your highest-quality paper
Get a qualified writer to help you with
“ Corruption of Corporations in Oryx and Crake ”
Get high-quality paper
NEW! AI matching with writers

Therefore, this essay will discuss how corruption of corporations ultimately leads to destruction and instability of social structures at societal and individual levels.

First, there are four major corporations in the society of Oryx and Crake that must be introduced and discussed. OrganInc and Rejoovesence are two main biomedical corporations seen in the story. OrganInc is a company that created pigoons which contained specific human organs, so that the transplants could be done easier and quicker. Another similar corporation is Rejoovesence and this company specialized also in bio engineering and where Crake held power in.

Also, Rejoovesence created Crakers instead of pigoons. Both bioengineering corporations were corrupted in the novel because they tried to make profit or benefit towards themselves through spreading disease. AnooYoo and HelthWyzer are two main pharmaceutical corporations that are also very corrupted. AnooYoo is a company where there is “a collection of cesspool denizens who existed for no other reason than to prey on the phobias and void the bank accounts of the anxious and the gullible” (247). HelthWyzer is another pharmaceutical corporation which controls the compound and also manufactures pill and many other pharmaceutical products.

These two pharmaceutical corporations also became corrupted because instead searching for a new cure for sicknesses; they put a new virus or bug in order to get the citizens to buy more products from the corporations. “They put the hostile bioforms into their vitamin pills – their HelthWyzer over-the-delivery system – they embed a virus inside a carrier bacterium, E. coli splice, doesn’t get digested, bursts in the pylorus, and bingo! Random insertion, of course, and they don’t have to keep on doing it – if they did they’d get caught, because even in the pleeblands they’ve got guys who could figure it out. But once you’ve got a hostile bioform started in the pleeb population, the way people slosh around out there it more or less runs itself.

Naturally they develop the antidotes at the same time as they’re customizing the bugs, but they hold those in reserve, they practice the economics of scarcity, so they’re guaranteed high profits.” (211). This quote shows that pharmaceutical companies inject bacteria inside the pills, so that when people get sick, they can buy the antidote to the injected bacteria. From this cycle, the corporations are able to make a lot of profit. As presented, these corporations are corrupted and only cared to benefit from individuals of the society. However, corporations should act as organizations that help in securing the society.

Second, to evaluate how corrupt corporations affect the society, the social structure has to be examined. In the society, the power of government is lacking, so the corporations are the ones with the most power. There are two classes within the society of Oryx and Crake: compounds and pleeblands. Compounds are the areas where higher classes inhabits and in order to be separated from the outer world through building a high wall around the area and CorpSeCorps security guards to protect the citizen who live in the compounds. Due to the long period of separation form the outer world, the citizens in the compounds got the idea that the other citizen from outer world cannot become like them and will only bring down the society. As mentioned above, the compounds are influenced by the corruption of the corporations since they are taking medicines injected with new bacteria. Then, they will have to spend lots of money to buy the antidote. Just because of the corporation’s greed, many people suffered from the bacteria. Also, since there is no way to stop the corporations, they can do whatever
they want just to benefit themselves. The other area that was presented in Oryx and Crake is pleeblands. Pleeblands are the outer world which compounds do not bother cooperating with. Due to the segregation of importance or wealth, the citizens in pleeblands do not get enough education. “Despite the fingerprint identity cards now carried by everyone, public security in the pleeblands was leaky: there were people cruising around in those places who could forge anything and who might be anybody, not to mention the loose change – the addicts, the muggers, the paupers, the crazies. (27). Even the pleeblands were affected by the corruption of corporations because due to their greed, the area of pleeblands became poorer as time passed. Due to the desperation of the plebian, people from the compounds had a possibility which led to many dangers, murder, smuggle, and much more.

Last, in order to provide a better illustration, three characters will be closely looked at: Oryx, Crake, and Jimmy. Oryx is a mysterious figure in the novel because her real name. Also, her past was not very clear when compared with the pasts of Oryx and Jimmy. She was influenced by the corruption because due to the corruption or Rejoovesence, she died. The other character who also was affected was Jimmy. He was mentioned as Snowman, who goes and talks about the past and the present and is a literary person. He is affected by the corporations because he had a lot of trouble surviving through the modified organisms that were made by the corporation. For example, Jimmy went through a lot of trouble to get away from pigeons (269~271). Crake is Jimmy’s best friend and unlike Jimmy, he has good knowledge of science. When he was little, he was aware that the corporations in the society were beginning to corrupt.”As soon as they start doing art, we’re in trouble” (361). This quote shows that if the corporations corrupt in arts, many people will suffer while the corporations gain benefit. The citizens knew about the corruption, but took no action and went back to their usual routine. However, Crake did not follow his routine instead he created perfect humans, Crakers. In conclusion, the greed of companies lead to corrupted business models and this eventually put the society and individuals in danger. Atwood takes a dim view of corporations in her novel, Oryx and Crake. The four major corporations only cared about making gains that would only benefit their companies. This caused these corporations to
become corrupted and carry on wrongfully. Such corruption infiltrated to individual levels as exemplified through Oryx, Crake, and Jimmy. Therefore, they must be clear without any corruption because as this essay showed, it will be reflected in individuals living in that society. Work cited

Corruption of Corporations in Oryx and Crake. (2016, Mar 18). Retrieved from http://studymoose.com/corruption-of-corporations-in-oryx-and-crake-essay 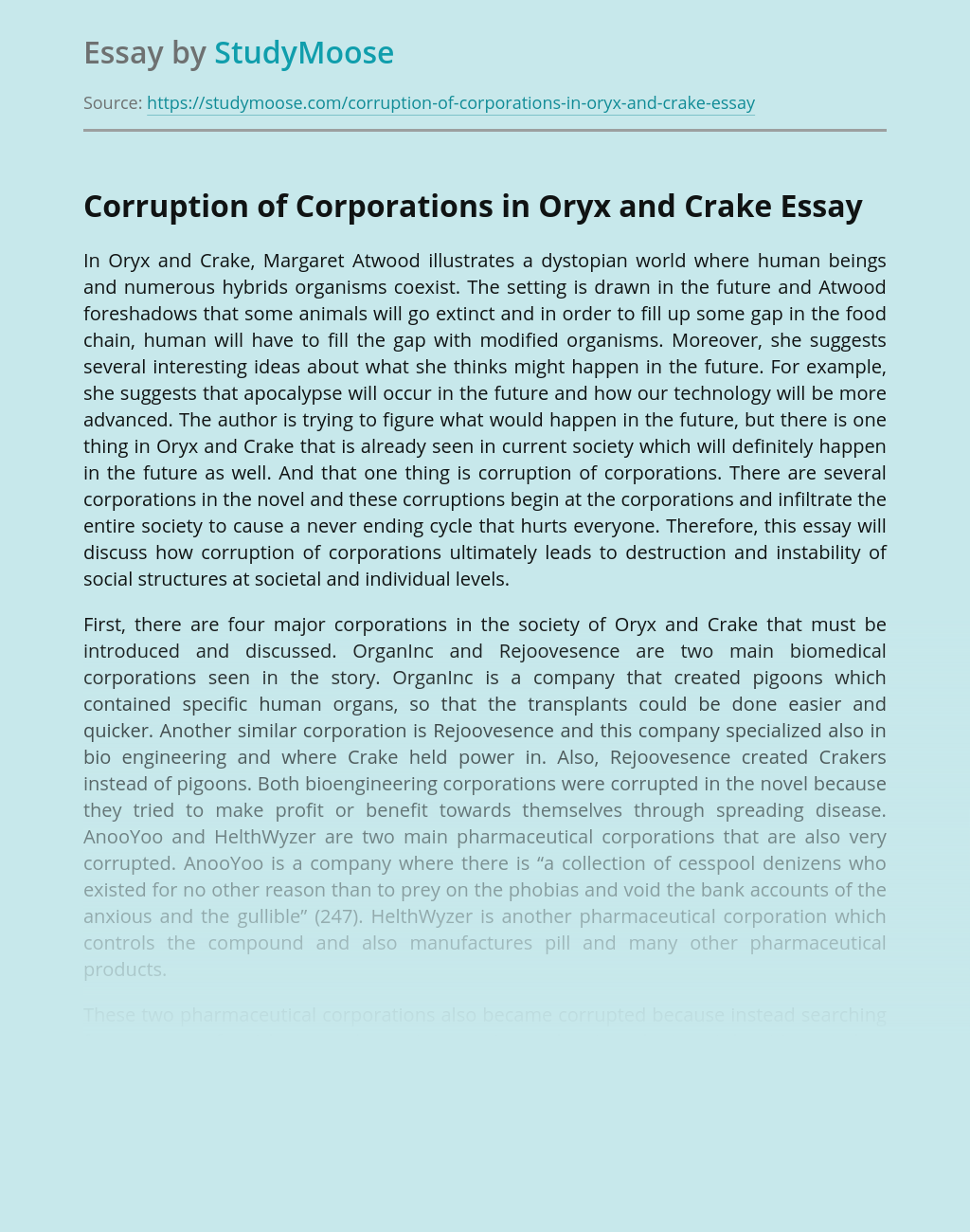 Turn in your highest-quality paper
Get a qualified writer to help you with
“ Corruption of Corporations in Oryx and Crake ”
Get high-quality paper
Helping students since 2015
Stay Safe, Stay Original