Fidelis ad Mortem A History of The New York Police

Since the declaration of Dutch independence in 1609, the city of New York, the called New Amsterdam, had been a relatively large and sprawling municipality. As one might expect, the city had criminal elements in proportion to its population. (Costello, 1885) Throughout its history, the entity that would become the New York Police Department has represented the leading edge in law enforcement, organization, technology and civilian relations. By 1800, having repaired the privations caused by the revolution of 1776, the city began to formalize its law enforcement procedures.

Don't use plagiarized sources. Get your custom essay on
“ Fidelis ad Mortem A History of The New York Police ”
Get custom paper
NEW! smart matching with writer

Costello, 1885) In 1798, the city established its first official police office.

By 1800, the city had four incarceration centers. Three of them were criminal jails and one was a debt prison. (Costello, 1885) The institutions were the State Prison, the Penitentiary, Bridewell, and The Jail. (Costello, 1885) The city had already been administratively divided into three districts. Because two of the districts were so large geographically, the “Watch” as they were called then, abandoned their traditional practice of standing at station, and began the first foot patrol in the history of New York law enforcement.

Costello, 1885) By 1803 the number of patrolmen in each of the three districts fifty, fifty-four and thirty-six.

Each district was overseen by two captains of the watch, who were the administrative heads of the district. (Costello, 1885) This system, called the constabulary (as it was administered by constables) lasted and grew until the formal establishment of a police department in 1845. After the last high constable of the city of New York (a position analogous to the Police Commissioner) Jacob Hayes, retired in 1844, the governor of New York gave permission to the mayor to establish a police force.

Costello, 1885) Watchmen and constables were replaced with police officers. (Costello, 1885) The officers wore eight-pointed stars (these represented the eight constables of the watch that existed in 1844) featuring the city seal, and made of copper. (Frequently Asked…1999) It was the wearing of these copper stars that earned the police the nickname “cop”. (Short for copper). (Frequently Asked…1999)

In Britain, the same nickname for police was derived from the initials of their title, Citizens on Patrol. Thus the United States and Britain had their own distinct “cops” patrolling the street. Frequently Asked…1999) The headquarters of the New York Police Department have changed over times. They began as a series of offices in City Hall, and in 1909, a building dedicated entirely to police administration was built on Center Street in Little Italy. This remained the centerpiece of the department until 1973, when the offices were relocated to the financial district at One Police Plaza. The image of a modern New York City patrol officer is a combination of many traditions, regulations, habits and practices adopted and adapted for conditions within New York City. Frequently Asked…1999) The eight-pointed hat that is emblematic of the patrol officer is a memorial of the eight original Dutch Watchmen. (Frequently Asked…1999)

The necessity of having to deal with female criminals made the appointment of female officers an earlier necessity. (Frequently Asked…1999) In 1891, four police matrons were appointed to deal with female prisoners. In 1911, the title of Policewoman was created, and six women were appointed. Frequently Asked…1999) Despite their long history of diligence, bravery and courage in a very difficult setting, the NYPD has also had its share of low points. In the late 1950s and into the 1960s, the department fell victim to rampant corruption. (Kefauver Investigation… n. d. ) Criminal organizations had made permanent and profitable allies in within the department, and the police began acting according to the whims of crime bosses, offering enforcement and punishment for drug trafficking enterprises throughout the city. (Kefauver Investigation… n. d. When an officer, Frank Serpico, attempted to expose these abuses, he was violently repressed by members of the police department. Eventually, in the early 1970s, after being shot in the face in the line of duty (under suspicious circumstances) Serpico took his story to the New York Times. (Kefauver Investigation… n. d. )

Inspector General Kristine Hamann said that serious errors were made following exsisting protocols, which had since been changed. (Mushabec & Wiggen, 2008). She said past officials failed to appropriately monitor some lab workers’ performance and enforce standards. Hamann said her investigation began after the state Division of Criminal Justice Services asked her to investigate allegations of “dry labbing” – sending results to police and prosecutors without doing the actual lab tests – in 2002. Mushabec & Wiggen, 2008). Despite these incidents, and numerous other cases of varying brutality and error, the overall record of the NYPD is impressive. The men and women of the New York Police department also have a long and prestigious history of protecting the population of the city. (Bosak, 1999)

In 1863, in the middle of a hot summer, and short of patrolmen, the Police of New York was called upon to protect African Americans of the city from the rioting mobs who protested Abraham Lincoln’s Civil War Draft. Bosak, 1999) The African-Americans were obvious targets given the perception in the city that the war was being fought to free southern slaves. (Bosak, 1999) The violence began as the enlistment office on 3rd Ave. was burned to the ground by a segment of the city’s own fire department in protest to their prospective draft. (Bosak, 1999) Beaten nearly to death on his way to third avenue, was Joseph Kennedy, a police Chief of Department, and police precinct offices became targets of rioters as four were killed and two station houses destroyed on the first day of riots. Bosak, 1999) As the rioting expanded, the citizen protesters were joined by criminals, looters and other miscreants and the violence escalated (Bosak, 1999).

The armory was sacked and burned, and the rioters did the same to a home for orphaned Black children. (Bosak, 1999) A station on West 35th St. wired police headquarters on Mulberry Street with a question. (Bosak, 1999) Expecting an attack, they asked if they should fight or flee. The message they received from police headquarters was a single word: “Fight. (Bosak, 1999) The 35th street station took in the Black orphans and withstood seven attacks by the mob without capitulating. (Bosak, 1999) It was from events during this riot that the citizens gifted the NYPD with their motto, Fidelis ad Mortem”, loyal to the death. (Bosak, 1999) From 1806 to 2007, the department has lost 758 officers in the line of duty. Of those deaths, twenty-three occurred as a result of the terrorist attacks on the World Trade Center in September of 2001. (Mushabec & Wiggen, 2008). Nearly half of the remainder of deaths was from hostile gunfire. (Mushabec & Wiggen, 2008).

Headquartered now at 1 Police Plaza in Manhattan’s financial District. , the New York City Police department spans over 20 different departments and nearly eighty patrol precincts. (Mushabec & Wiggen, 2008). Despite the occasional instances of misconduct, the nearly 40,000 men and women of the New York Police Department have served with a great deal of distinction under very difficult circumstances in a city renowned for its violence, drug use and crime. (Mushabec & Wiggen, 2008). The police have been able to reduce the occurrence of all of these acts, and continue to earn the trust of the population. 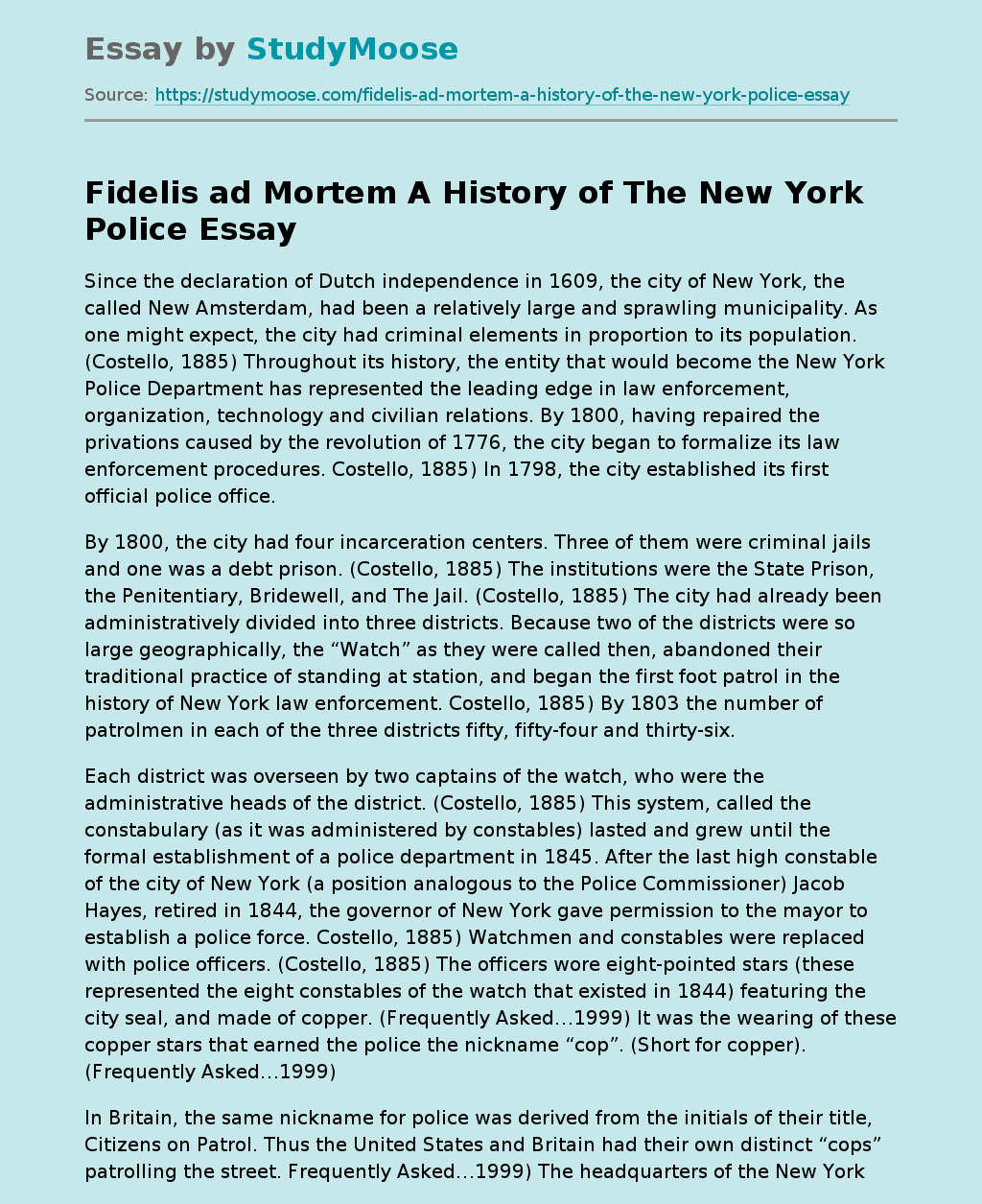