The movie Gangs of New York is a 2002 film directed by Martin Scorsese which takes place between the year 1846 and the 1860’s. It is loosely based on the 1927 book of the same name by Herbert Ashbury. It is set amongst the turmoil in New York’s notorious Five Points District between the “native New Yorkers” and the thousands of Irish immigrants. It is told from the viewpoint of Amsterdam Vallon (played by Leonardo de Caprio), who as a young child witnessed the death of his father ‘Priest’ Vallon (played by Liam Neeson), the head of the Irish “Dead Rabbits” gang.

Don't use plagiarized sources. Get your custom essay on
“ Gangs of New York ”
Get custom paper
NEW! smart matching with writer

The older Vallon was killed in a major gang fight by Bill “The Butcher” Cutting (played by Daniel Day-Lewis), the leader of the “native New Yorkers. ” The scenes leading up to this fight opens up the story and sets the stage for the film’s premise of the Irish being the underdogs and an enraged son comes back to avenge the death of his father.

The Story After his father’s death, the young Amsterdam is taken to a correction facility and is only released some 16 years later. Now a grown man, Amsterdam returns to Five Points to establish himself and begin his plot of revenge against Cutting.

Upon returning Amsterdam reunites with his childhood friend Johnny Sirocco (played by Henry Thomas) who introduces him to Bill the Butcher who had built for himself a criminal gang empire. Amsterdam discovers that a number of his father’s former allies including Happy Jack who had become Sheriff (played by John C.

Reilley) were now working for Cutting. Amsterdam also gets to meet and fall in love with Jenny Everdeane, a pickpocket and thief but their love affair is dampened when Amsterdam learns that Jenny used to be Cutting’s ward and woman.

In a quirky twist of fate, Cutting takes a liking to Amsterdam and takes the lad under his wing as a sort of apprentice. Amsterdam plays along biding his time for an opportunity to exact revenge on his father’s killer. Amsterdam, wanting to make his revenge more dramatic and poignant decides to take action on the 16th of February, the anniversary of the battle between his father and Cutting. Unbeknownst to him, Johnny who was jealous of Amsterdam’s and Jenny’s love affair had earlier revealed Amsterdam’s true identity to Cutting.

So when Amsterdam hurled his knife, “the Butcher” was prepared and quickly parried the attack before throwing a knife of his own back at Amsterdam. Cutting mauled Amsterdam’s face and branded it with a hot knife but in the end decides to spare the kid’s life as his life was also once spared by Amsterdam’s father. Badly beaten up, Amsterdam is nursed back to health by Jenny in 3 months while in hiding. Jenny pleads to Amsterdam to flee the area and go to Florida with her. Amsterdam however decides to stay on, even remobilizing his father’s old gang the dead rabbits.

When Cutting learns of this he sends Happy Jack the Sheriff to track down Amsterdam. In the ensuing chase through the church’s catacombs, Amsterdam kills Happy Jack and strings him up like he was crucified in the town square. Johnny admits his betrayal to Amsterdam hoping for forgiveness but Amsterdam sends him away in distrust. Johnny is then accosted by Cutting who mortally wounds him in revenge for the death of Happy Jack. Amsterdam upon rushing to the town square, sees his friend in pain, in an act of euthanasia, Amsterdam shoots Johnny to end his misery.

An election is held for the vacant Sheriff post and Walter ‘Monk’ McGinn, a former ally of Priest Vallon wins. Not being able to accept this, Cutting underhandedly kills McGinn providing a spark for another gang war. During McGinn’s burial, Amsterdam issues a challenge to Cutting which “the butcher” accepted. As the gangs were preparing to fight, the riots against the Army draft where also gaining momentum. Thousands of draft protesters turned into angry mobs which attacked draft centers and people of color. The union army was called in to quell the violence.

Just as the gangs of Amsterdam and Cutting faced off in the town square, the offshore Navy ships started firing directly at the square, killing many gang members and mortally wounding Cutting. The dreaded “butcher” offered no resistance as Amsterdam delivers the final blow and kills him. The last few scenes show Amsterdam and Jenny going amongst the dead, both friend and foe. Cutting is laid to rest alongside Amsterdam’s father against the old backdrop of old New York which gradually fades into succeeding frames showing the growth of the old city to the present day.

Historical Accuracy Although the movie was shot in movie sets in Rome, the district of Five Points was meticulously recreated based on drawings from the era. In this regard the feel of the place was very close to the real thing and the film succeeds in imparting this atmosphere to the viewer. However, this is just about the only exact historically correct fact in the film. The characters of Amsterdam and his father Priest are fictional while the character of the “Butcher” is loosely based on a gang leader of the time but who died some 10 years before the draft riots.

While the buildings coupled with dramatic lighting and music conveys the chaotic life in Five Points very well, some of the incidentals are inaccurate like the depiction that there were many Chinese at the time. Records show that only a handful of Chinese were in New York in the 19th century and most were ship hands. In an interview over national public radio, American History Professor Tyler Anbinder of the George Washington University and author of the book “Five Points” debunked many of the events in the movie as loosely based on history but is largely fictitious in terms of historical accuracy.

Anbinder did note that Scorsese did a fabulous job of recreating the persecution experienced by the Irish and other immigrants in general upon their arrival in New York in the 19th century. What was inaccurate in many cases was the way Scorsese over dramatized the amount of carnage and death in all of the fight sequences including the very heart pounding opening battle between the gangs of Priest Vallon and Bill Cutting. Scorsese has over dramatized the amount of bloodshed and death there would have been in a pre-Civil War riot.

There were a couple of riots very much like that one depicted in the movie between native-born Americans, Protestants and Catholics in the neighborhood, but at the most, they resulted in a death or two, not the huge carnage you see in that scene… Not the streets flowing with rivers of blood, no. (Siegel) Anbinder also points out that while the film’s portrayal of the draft riots imparted the true sentiment of many New Yorkers who were against the draft and against the abolition of slavery, many elements were fictitious like the amount of bloodshed and that there were no navy gunships in the harbor firing at the city.

The real riots also took place in the summer and not winter as portrayed in the movie. Archeologist Rebecca Yamin believes that while the District of Five Points in New York did have a shady, sleazy, and criminal side to it, it has gotten more negative publicity than it deserved. Yamin believes that much of what has been written on Five Points are influenced by religious zeal, a desire to sell papers, or plain-old fear. “Middle-class outsiders looked at this neighborhood that was teeming with activity and street people selling food, and it was frightening.

They just looked from the outside and assumed it was all very bad. ” (Chamberlain) In the years between 1992 to 1998, Yamin led an archaeological team that analyzed some 850,000 artifacts unearthed in what used to be the Five Points District. Yamin’s team discovered that the artifacts together with historical records show that the District was not as bad as portrayed. Most immigrants were hard working with legal jobs and were just trying to eke out a decent living. “They were doing what they could do for their families to live respectably,” Yamin says.

“They had ornaments on their mantels and pictures on their walls and teapots and teacups, and they were eating very well. ” (Chamberlain) Scorsese simply based this film on the book by Ashbury who wrote it in the 1920s when gang warfare Al Capone style was prevalent. Historians believe that Ashbury didn’t do much research on his own and that apart from the names of the gangs at the time, his work is largely speculative and fictionalized. Critics also find that the film glosses over the issues of racism of Irish immigrants against African Americans.

While the draft riots were mainly against the draft, the violence was also tacitly directed against the black community in New York. The film ignores the seething racism of Irish immigrants against African Americans, not to mention the horrific violence done to blacks during the riots. Scorsese throws a few pitiful bones–a token black member of an Irish gang, a priest bonking an Irishman on the head for shouting at a “nigger” to leave a Catholic church, and a random camera pan past a lynching.

However, none of these has any meaning within the film, except maybe to stave off the critics. (Justice) All in all, Scorsese succeeds in producing a compelling human drama set in the neighborhood of Five Points. His dramatic style also succeeds in imparting to the audience the hardships faced by the early Irish settlers in the hands of locally born New Yorkers, also truly depicted was the New Yorkers abhorrence of the draft. But Scorsese fails by way of exclusion of some vital points like the sentiment of the Irish settlers against the Black Americans.

Had he included this, it would have painted quite a different picture of the events. The “hero-like” role taken by Amsterdam and his Irish settler gang would have been tarnished. In terms of exact historical accuracy, the film is definitely inaccurate and in no way are the sequence of events to be taken as factual. A good film visually and emotionally but lacking in depth and accuracy. 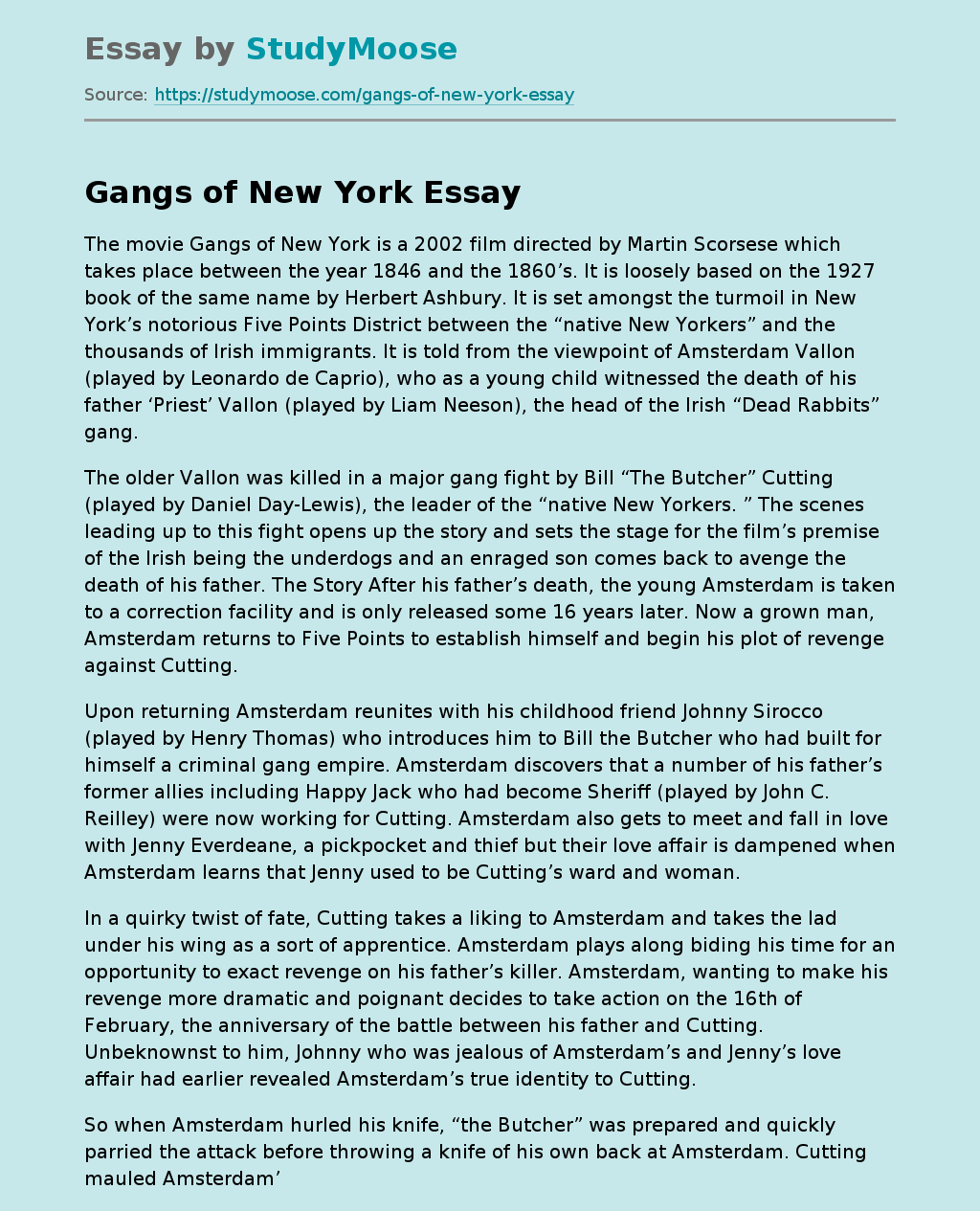