New York Burning is a book written by Jill Lepore narrating a story about parts of history in New York City. The book implies as to how single sort of slavery made such type of liberty in New York during 18th century, as NY was considered a dazzling city as the people will see such paved streets with parks and beech trees shading like of parasol with good oysters as there can be miserable truth of having no freedom.

Turn in your highest-quality paper
Get a qualified writer to help you with
“ Book Analysis of “New York Burning” ”
Get high-quality paper
NEW! AI matching with writer

Thus, there were enslaved men and women being conspired that involved deep indication of evidence as there is worth of survival and excavation as the conspiracy of the slaves will imply the casting of violent shadow as it parallels to the political scene.

Slavery was then a political issue but, what occurred in New York suggests that there was exertion of authoritative influence dealing to the political existence as the slaves were being suspected of conspiracy as the book describes in the first two chapters. There was emergence of political parties but there are also those critical months of having political antagonism by means of burning black men in a sudden motion.

The readers of New York Burning will be able to learn such immense situations concerning the politically-inclined ruthless English immigrant, by the name of Daniel Horsmanden as the court justice at the New York Supreme Court as Daniel played a crucial role for the transmutation of sequences relating to robberies as well as disbelieving fires and Horsmanden has shaped the past memory of terrible and not known incidence.

The author of the book, Jill Lepore then rescue Horsmanden from darkness and places him on trial in the horrible burnings as well as hangings carried out through justice in Lepore’s creative retelling of catastrophic events as Lepore saw New York’s unstable political days and certain ideas informed as it is crucial for the understanding of the plot jolt as Lepore believes that what transpired during the year 1741 was clear in light of continuing the discussion regarding freedom and slavery that originated in 18th-century English political civilization in New York City.

The parallelism amid the challenge over the accurate to utter opinion in publishes and desire of slaves to expand personal liberty that was outstanding to the people. Amicably, Lepore succeeded in persuading her readers about the flow of logical sanctions in looking at the city of New York as there was the presence of the enslaved blacks determined to be heard as there supposition of political adversary as frightening as it was.

There was Lepore’s expedition into the characteristics of New York City that includes such wellbeing and hygiene issues as well as the job routine of imprisoned men. The author of New York Burning demonstrated a well-developed communications system having the major node at Comfort’s glowing joined by discrete slaves mutually. Whether the country’s blacks were being far connected than the whites had think of as there ever conspired in committing the actions as emotional that remain unlock question.

In the book, Horsmanden was being keen to provide credibility to assumption that mayhem was intended and subtly unlikely acknowledgment of the African Americans who were frantic to set aside the value of life but, such possible criminals in view as to whom Horsmanden had documented as the well-known individual Catholics have twisted in obliterating as there was the alleged evidence of Catholic scheme as personified in person of John Ury, another arbitrator that allocated responsibility for disaster in New York into overarching Catholic scheme.

Moreover, Jill Lepore discerns diverse plots of unlike degree of likelihood as Lepore train her interests on plots that encouraged the New Yorkers to agree in placing of bereavement of many slaves and deport of others and there downplays the position of non-Catholic emotion within catastrophe that occurred.

Thus, Lepore’s New York Burning has done a marvelous post of demystifying Horsmanden’s powerful manuscript and changes how the people believe about years in the history of New York as one important theme that Lepore pursues, is the unsafe lawful events that positioned stern limitations on civil liberties of the black defendants as they had nix right to have guidance and if Horsmanden is envoy, there can be ridiculed evidence as disliked.

Moreover, in the book, Lepore had discovered certain religious timbre as the author noted that few slaves like for instance, the Portuguese-influenced Angola and Kongo had come across the presence of Christianity in African region. Henceforth, Jill Lepore explained and discussed the labor of Anglican catechist and has portrayed how several Protestants opposed the initiation of slaves because of fear that it can impudent the belief for freedom. Furthermore, Lepore seems to float along with unreeling story of scheme as can be partially true and adding up the drama as Lepore merge her voice with the witnesses.

Aside, Lepore reported on rules and made criminals of priests ingoing the settlement of terror in New York of a lurking offshore. Amazingly, Lepore offers no clear conclusion about whether there was really a plot of Horsmanden’s diary having approval but still there is less doubt that the action case was bogus as the author of the book has also shed grave hesitation on veracity among confessions in viewing that prosecutors have urge admission as best way for accused in run off for his finish.

In conclusion, the book was well-written and thoroughly researched that has a gripping account of proceedings that led to the bonfires of the Negroes as the author’s description is vibrant and challenging and has evoke New York in its ethical and corporeal scruffiness within vision of freedom.

Upon its ending, there were thirteen slaves being burned and seventeen being dangled and hundreds were locked up as Lepore writes the prison is like the hull slave craft and argued that some slaves were plotting alongside masters of Masonic ceremonies and masquerade priests. In New York Burning, Jill Lepore describe theatrical events with better breaking study as there explores the social climate of epoch but, Lepore noticeably show how danger of black revolt had united the white pluralities of cultural panic and aggression.

Thus, Lepore’s meticulous research confronted the reader with dreadful ending as the respected citizens will permit to death of humans as the author, Lepore provide the reader with better milieu on approaches of New York whites headed for slaves and Lepore has done magnificent job of past investigation and understanding and straddling better column amid accepted work and works of educational account.

Therefore, Jill Lepore’s use of the position and instance is motivating and Lepore’s account of New York Burning has brought useful awareness behind the beautiful story it has given to the readers of history. New York Burning by Jill Lepore was really an eye-catching book endowed by masterpiece encircles with lush mind’s eye in exceptional blend that is phenomenal learning and terrific writing as Lepore implies that the.

New York Burning informs a matter of terrible story in city which was bloody than Salem along the pursuits of slavery with development of actions that surrounds the American Revolution denoting a serious instances from within the book content. I agree that New York Burning was an exceptional book by Jill Lepore that has exposed the dismay of slavery as the book describes in immense facet of independence in lieu to slavery realities in New York.

Then, Lepore pointed out the fear of slave rebellion as a reliable theme all throughout the days within colonies. Reference: Lepore, J. (2005). New York Burning: Liberty, Slavery and Conspiracy in Eighteenth-Century Manhattan About the Author Jill Lepore is a Professor of History at Harvard University and also the author of The Name of War: King Philip’s War and the Origins of American Identity both won the Bancroft Prize and Phi Beta Kappa’s Ralph Waldo Emerson Award. Jill Lepore is contributor to The New Yorker and resides in Cambridge, Massachusetts. 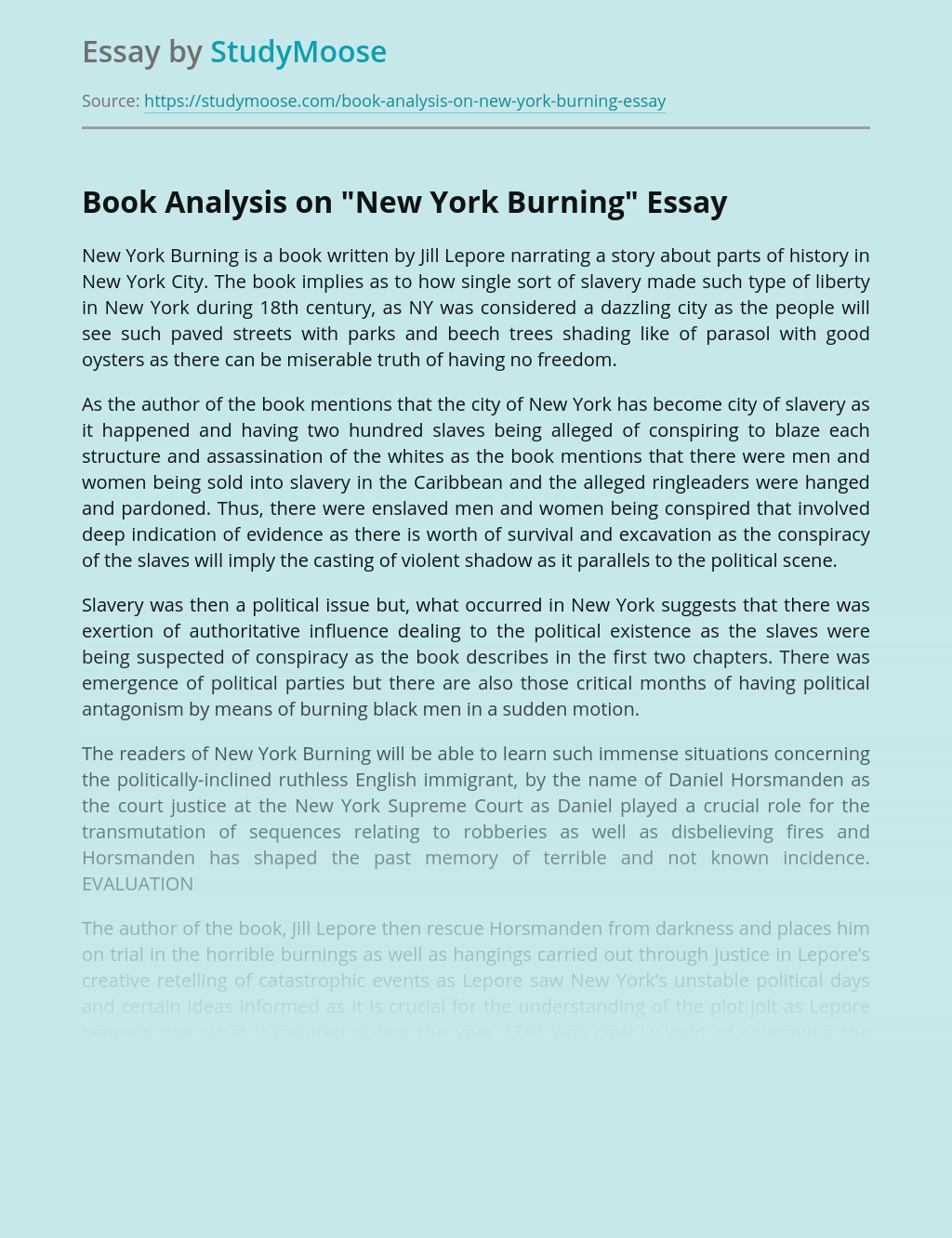 Turn in your highest-quality paper
Get a qualified writer to help you with
“ Book Analysis of “New York Burning” ”
Get high-quality paper
Helping students since 2015
Stay Safe, Stay Original