Although Martin Scorsese’s 2002 film “Gangs of New York” purports to be an historical film which recounts ethnic based gang rivalries in 1863 New York City, the film relies heavily on poetic-license, accentuating violence and a typical Hollywood “good versus evil” story-line, rather than delving into the historical specificities and realistic detail.

While it is almost certainly true that Gangs captures the flavor and mythopoetic spirit of America’s ethnically diverse past and the violence and tensions which seethed during the American Civil, it is equally true that the historical themes with which Gangs deals are of a secondary nature to its main thrust: which is to produce a slick, and profitable film.

Don't use plagiarized sources. Get your custom essay on
“ History of Immigration – Movie Gangs of New York ”
Get custom paper
NEW! smart matching with writer

So, while the movie deals with a tremendously important historical period in American history, the historical background “is incidental to Scorsese’s larger vision of reminding Americans of their violent past” 1 and, as such, the film’s viewpoints regarding immigration are abstraction from history and not representative of history itself.

That said, the film’s portrayal of immigration is to show it as a bloody, tremendously difficult process, a sort of pressure-cooker where the amalgam of cultures clashed in a violent soup, which, itself produced a unity through an altogether new culture, an American culture, born through a traumatic and protracted birth-struggle.

This vision is a romantic vision which simplifies the complex realities of the history of immigration in America in the nineteenth century. Scorsese, as mentioned, is not interested in depicting history, but to use the verisimilitude of history, the details and gritty realism of historical record, to paint a dramatically believable portrait of myth: a myth describing the birth of American culture in the fiery crucible of ethnic prejudice and competition.

Historical detail is a device, not a theme: “while Gangs is accurate in detail, it is distorted and mistaken in its larger characterizations and interpretation. This should not be surprising: Gangs of New York is a moneymaking enterprise. ” 2 If the film’s relevance to history is not one of accurate portrayal and realistic delving into the lives and events of the era depicted, then from where does its importance to history derive?

The answer to that question lies in the fact that while “Gangs of New York” may play fast and loose with historical accuracy, while it may simplify the complex sociological realities of intercultural integration — or lack thereof — in America’s war-torn past, the film remains faithful to a central, thematic idea which is also a core-reality of American history: that a nation which is ethnically diverse but upholds individual liberty must in the end cast-away the ethnic and racial barriers and competitions of the “Old World” in order to actualize the opportunities of the future.

That core-idea is a core-principal of American Democracy and it is a principle by which American history, including the American Civil War, has turned on as though upon an axis. The great value, historically speaking, of “Gangs of New York” is not in its depiction of history or its re-creation of historical events, but in the film’s vision of racism of cultural division and of American Democracy as a “melting pot” and also an ideal which transcends race or specific culture.

The problem in the presentation of this vision is that the Hollywood “hero and villian” paradigm, along with a stock formula of violence and greed, results in a film which buries these important themes beneath a slick “whitewash” and this is: “a foolish simplification, a stereotype, and not the business of historians. Rather, the problem with Gangs is that it wants us to think that Irish gangsters were “good” by ignoring their racism while it wants to make us think others are “bad” because they are racist. “

This kind of pretzel-logic may make for an interesting and immediately understandable film, but it does little to shed light on history or on the diffusion of cultural tensions in America. The film is conspicuously incompatible with a detailed or immersive reading of history. I do not personally belive that “Gangs of New York” accurately depicts the feelings of the people at the time or even the historical tensions themselves. Instead, the film “Without the veneer of historical righteousness[… ] is just another Scorsese bloodbath among white men.

With that in mind, there is merit in the film’s mythopoetic imaging of the emotional energy which explodes from America’s cultural diversity. Unfortunately, “Gangs of New York” fails to depict substantive and historically accurate characters who — if shown realistically — would be comprised of multi-faceted and perhaps contradictory impulses and beliefs. In conclusion, while Martin Scorsese’s “Gangs of New York” faithfully represents the formulaic, Hollywood notion of slick, effective commercial film-making, the film fails to faithfully represent the historical period from which is ostensibly draws its setting, theme, and characters.

While immigration can and should be rightfully regarded as a part of America’s mythopoetic past and also its mythopoetic identity, the historical realities of immigration and the actual historical ramifications of the cultural pressure-cooker that helped to birth America are absent from “Gangs of New York. ” In their place, broad generalization, ethnic stereotyping, epic contrasts of good and evil, and the classical arc of the hero-myth are used to both simplify and stylize an aspect of American history which is too nuanced and too complex to be accurately depicted through such an approach.

It is possible that “Gangs of New York” will inform a significant portion of its audience with the flavor of an historical period they might have otherwise missed observing altogether. However, in all liklihood, those who are stimulated to study this time-period by Scorsese’s poetic vision, will find themselves startled, and perhaps confused, by the amount of drama and profound thematic issue which were left out of “Gangs of New York. “ 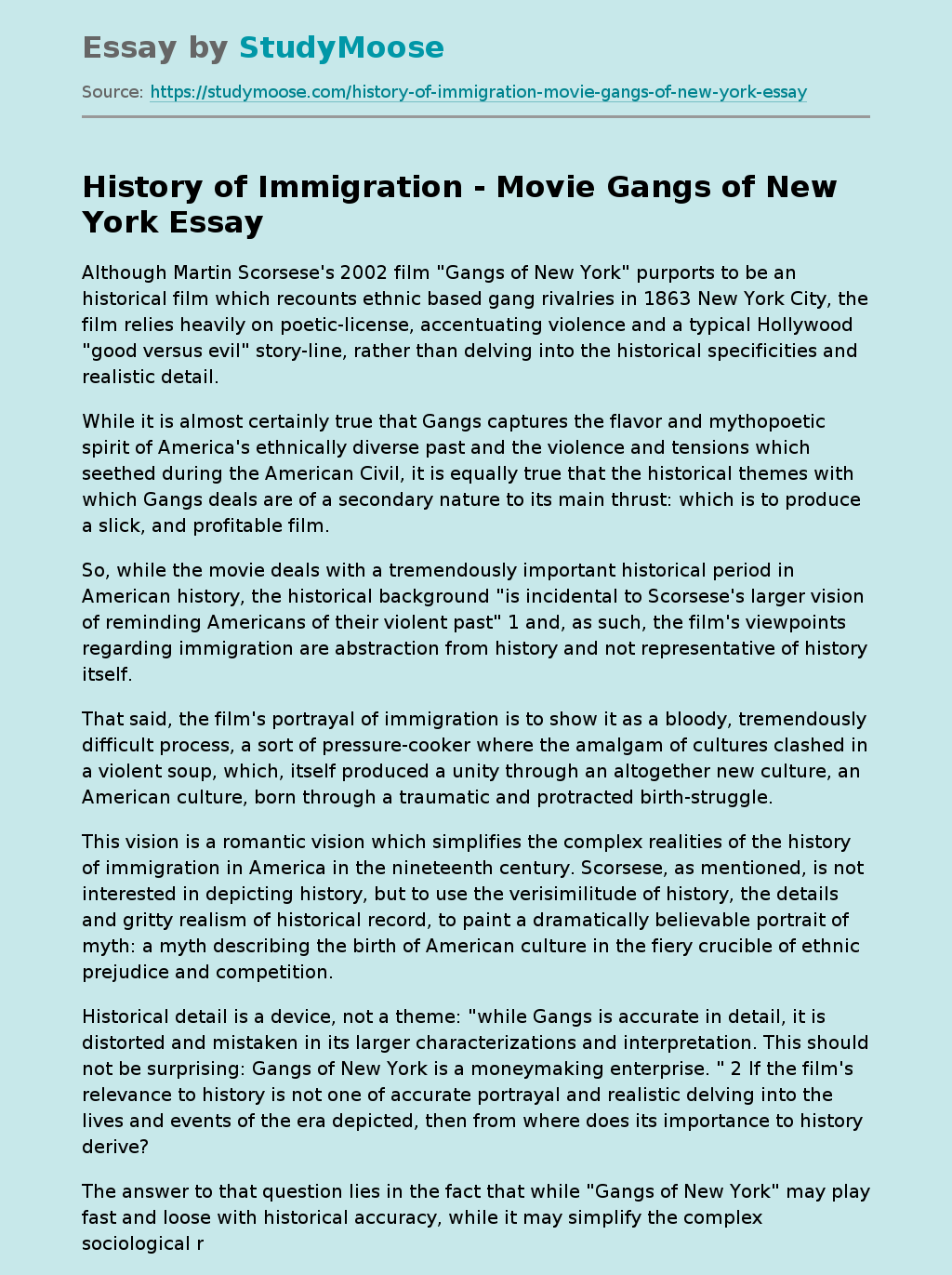