Feminism is for Everybody

Feminism is a social, cultural, moral and political advocacy encompassed on gender issues such as inequality. In this regard there are several writings that concerns the principles of feminism. The contents of literary works about feminism vary, some writers intend to advocate for the very cause of feminism blindingly, some authors, conversely, intend to provide information about feminism in a non-political or non-equalitarian manner. One such notable content can be found in Bell Hooks’ publication, Feminism is for Everybody.

Don't use plagiarized sources. Get your custom essay on
“ Feminism is for Everybody ”
Get custom paper
NEW! smart matching with writer

The primary intention of her book is to bring the feminist point-of-view to non-believers, apathetics and unfamiliar. Hooks also counters the popular notion regarding feminism as she feels that these notions should be given proper attention and correction. In this manner, the common misconception on the ideas of feminism will be clear to society.

In the book, Feminism is for everybody, the author rejects the usual beliefs connected to feminism and considers such belief as nothing more than a myth.

Hooks puts the arguments and advocacies of feminism in a summarized manner in order to provide a simpler context to readers as well as well as a new concept of what feminism should be. Hooks’ new concept of feminism suggests a fight against stiff sexism in a benevolent society, thereby ultimately advocating for an inclusive movement.

In Feminism is for Everybody, Hooks traces the roots of the feminist movement and gives detail on what it has achieved so far.

an advocacy minus the associations of anti-sexism (Hooks, 2000). The historical background of feminism is given in order to put emphasis on the misconstrusion that happened along the way and to give way to the new concept of the movement. Hooks raises the question is feminist a philosophical belief or a political cause, given that the author tackles the arguments of the radical feminists.

The debate whether feminism is a philosophical belief or a political cause can also be caused by one of the book’s chapters tackling gender oppression. The basis may be seen on the idea typecasting male as the enemy, the categorization of man as the oppressor and woman is the oppressed is the primary reason behind feminism’s second wave, however, Hooks also does not take away the fact that females are also responsible for such opression given that it took time for the supposed oppresed to spearhead for change (Hooks, 2007).

Hooks furthers this by giving the past mistakes of feminism and the misleading beliefs that feminists associated themselves with. This is on the account that most feminists focus on the problem and not on the solution. In a personal account, I am taken to a different world as far as feminism is concerned, primarily because Bell Hooks’ gives a different appraoch in discussing the cause of feminism. It is also notable that the author diminished the complexities of the feminist thought but still detailed enough to get me educated.

The book caused me to reconsider my prior beliefs regarding the arguments presented by feminists. The non-traditional manner of Hooks’ presentation eliminated my angst towards feminists and made me realize that it is time for change, Hooks compelled me to believe that it is time to dispose of the misleading conventional feminist beliefs of the past and focus on the current issues, moreover, Hooks made me believe that feminism is indeed for everybody.

References Hooks, B. (2000). Feminism is for Everybody. Cambridge: South End Press.

Feminism is for Everybody. (2016, Nov 16). Retrieved from https://studymoose.com/feminism-is-for-everybody-essay 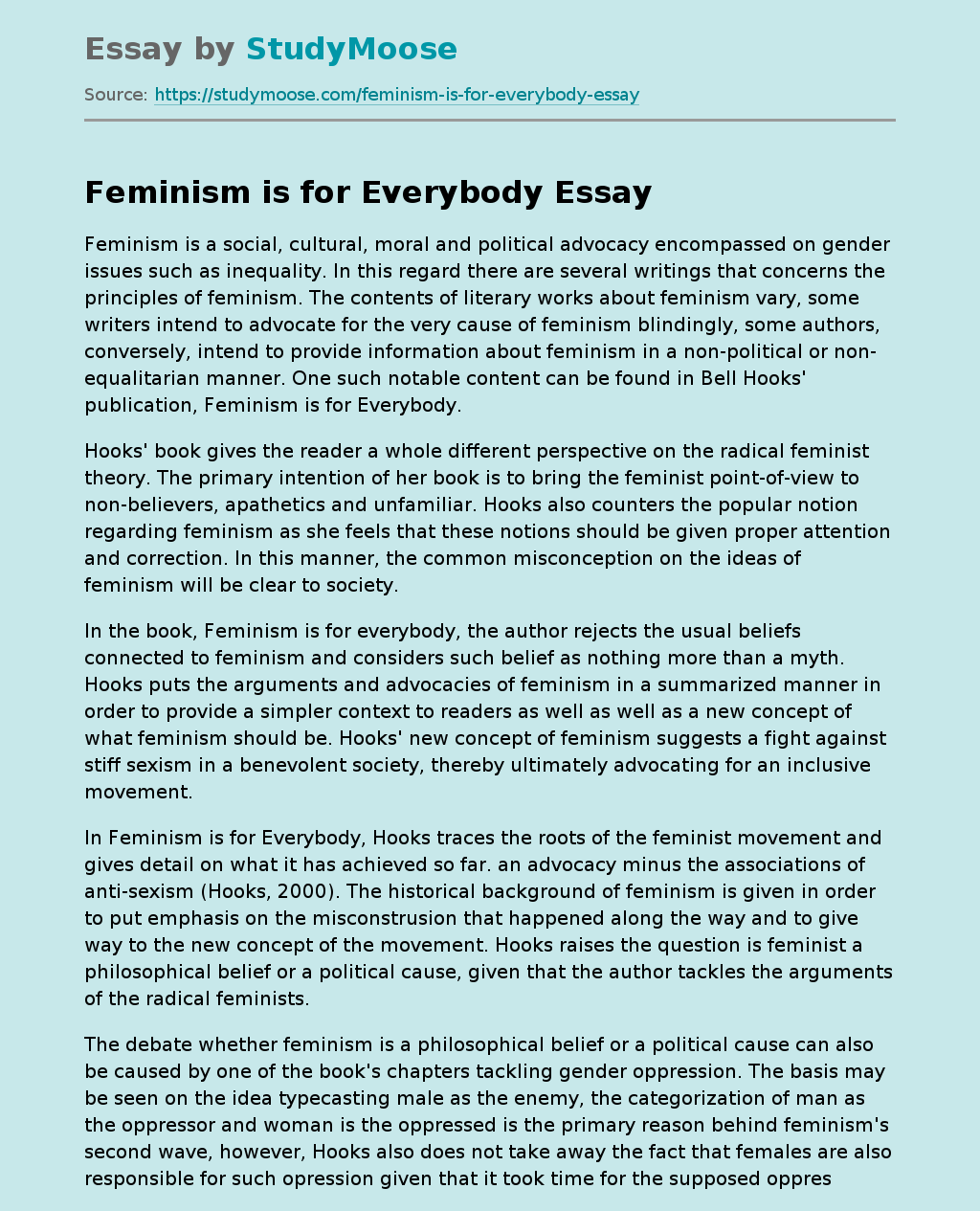