The development of the American Constitution was a battle between two opposing political philosophies during the late 1700’s. The Federalist and Anti-Federalist parties aroused at the formation and ratification of the Constitution. Both sides pointed out many arguments in order to find common ground in a governmental structure. The main conflict between the two parties revolved around the amount of power and control that the states and national government would obtain. As I am on the Federalist side, I support and agree to ratify the Constitution.

Don't use plagiarized sources. Get your custom essay on
“ Federalist vs. Anti-Federalist ”
Get custom paper
NEW! smart matching with writer

For this will give America a second chance to fix what the Articles of Confederation could not achieve and unite all the thirteen colonies to end the boundaries and corruption in the government.

The Federalist Party, led by Alexander Hamilton, was in favor of ratifying the newly written and modified Constitution. The United States was free of British control after the American Revolution. Their first official attempt on having a formal government was a document called Articles of Confederation.

Though that ultimately failed due to no taxation, no faith and interest from the government officials and gave too much power to the states. The newly formed Constitution proposed a strong central government and unite the whole colonies together. In that way, they could raise their own money through taxes, fund and direct a national army and deal with territory that was not part of the current states. The weak and unfavorable points of the Articles of Confederation appointed.

There should also be a consideration on facing a threat of invasion by France or England.

The Constitution would be able to keep all the states unites instead of frustratedly trying to fight them off again. With the Constitution ratified and in place, the national government would have a better standing in the world. Also the power, in the country will be distributed by Congress, with Senators and House of Representatives. The stated reasons above prove that the Constitution should be ratified and I stand with the Federalists.

They feared that the vast amount of power that the strong central government controls would lead to a new kind of tyranny. Though in the Constitution, the Federalist created the 3 branches -legislative, executive and judicial branch- which can also be referred to as Checks and Balances. The system was established to maintain balance and reassure the citizens that the President will not abuse and corrupt the U.S. government. The power between the states and national government would then be evenly divided. The Federalist had answers and counterarguments to the Anti-Federalist to prove the importance of the Constitution.

In the end, the Bill of Rights was written to fully complete the ratification of the Constitution and satisfy the Anti-Federalist Party. The Constitution was formed to create a better government and make sure that the sufferings and tyranny they experienced under the British rule would not repeat itself. You can definitely see the benefits and power that the Constitution gave us today. The law and systems of government stands strong over more than 2 decades. 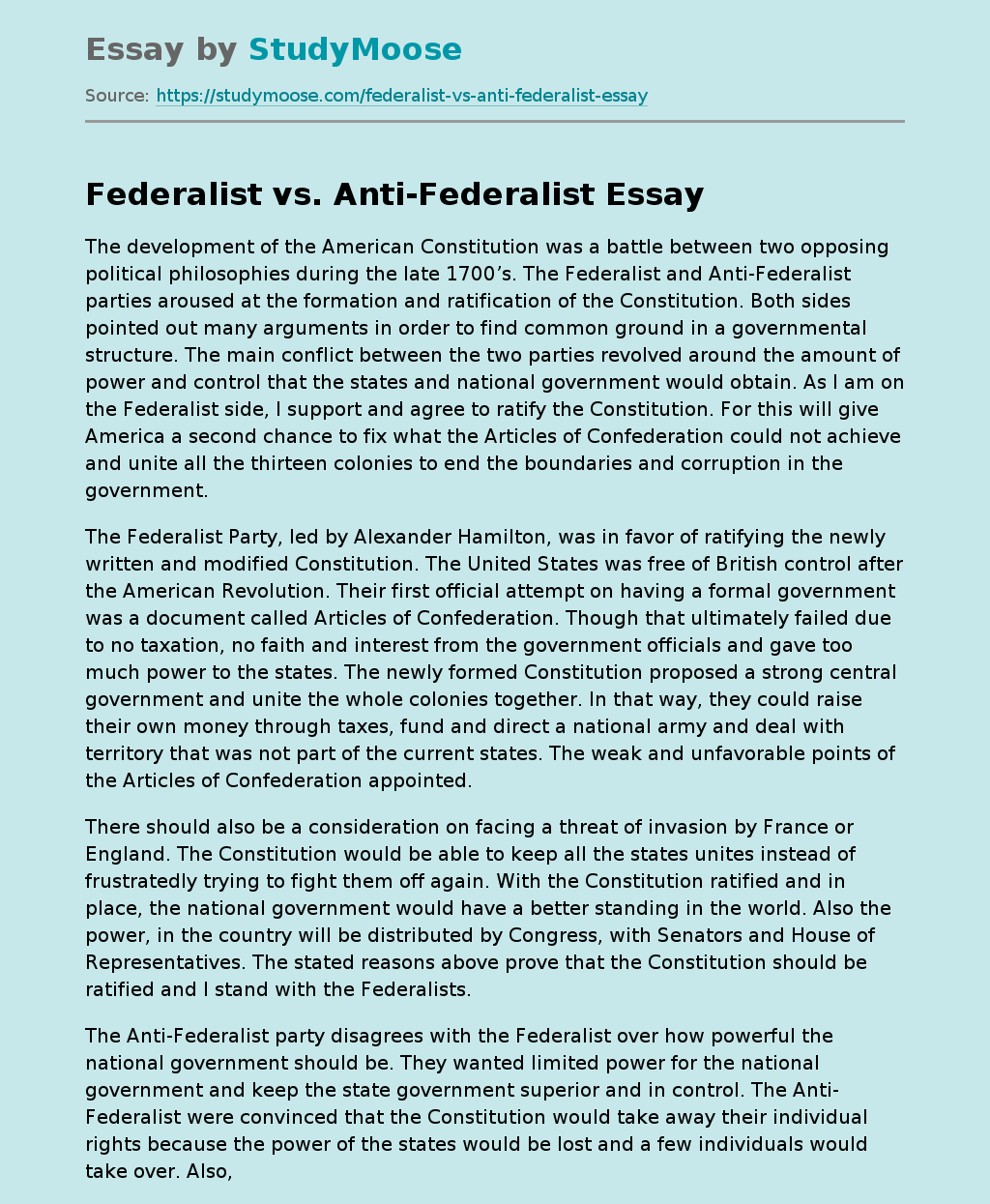