There has been a tremendous exploitation of cyanobacterial resources in the past few decades which has led to increase in mass production of blue green algae (cyanobacteria), from laboratory-scale to industrial-scale using modern biotechnologies (Milledge, 2011). The Chinese were recorded to have used the cyanobacterium Nostoc to survive famine thousands of years ago (Milledge, 2011). Presently, many cyanobacteria and microalgae species are used in foods and health foods, aquaculture feeds, and for production of biofuels, pigments, PUFAs (polyunsaturated fatty acids) and other fine chemicals (Spolaore et al.

Don't use plagiarized sources. Get your custom essay on
“ FATTY ACID PROFILING AND EFFECTS OF NUTRIENT DEFICIENCY ON LIPID ACCUMULATION IN ”
Get custom paper
NEW! smart matching with writer

, 2006). Several species have high contents of PUFAs of >18C atoms which are essential fatty acids required in healthy diets (Harwood and Guschina, 2009). Essential fatty acids are precursors of prostaglandins and so have importance in the pharmaceutical industry (Becker, 1994). Many species accumulate high levels of lipids in the form of glycerolipids, such as triacylglycerols (TAGs), phospholipids (PLs) and glycolipids (GLs). TAGs are sources of edible oils and biodiesel, and PLs are useful as aquaculture feed.

Reports have also indicated that lipid contents and compositions in microalgae and cyanobacteria can change significantly with nutrient deprivation (Gardner et al., 2010, Liu et al., 2016). Cyanobacteria are a group of diverse gram-negative phototrophic prokaryotes having oxygenic photosynthesis similar to the higher plants. Nostoc is a heterocystous, filamentous blue green alga of the family Nostocaceae. It is commonly seen in moist soils and on rocks, as well as in and around stagnant and running freshwater and marine water-bodies. In this study, Nostoc muscorum was investigated for its lipid content, fatty acid profiles and growth in response to nutrient availability, namely phosphorus and nitrogen.

The results presented here show the potential of N. muscorum for the production of lipid to be used for general or specific applications.

Collection, isolation and identification of cyanobacteria

FATTY ACID PROFILING AND EFFECTS OF NUTRIENT DEFICIENCY ON LIPID ACCUMULATION IN. (2019, Aug 20). Retrieved from https://studymoose.com/fatty-acid-profiling-and-effects-of-nutrient-deficiency-on-lipid-accumulation-in-essay 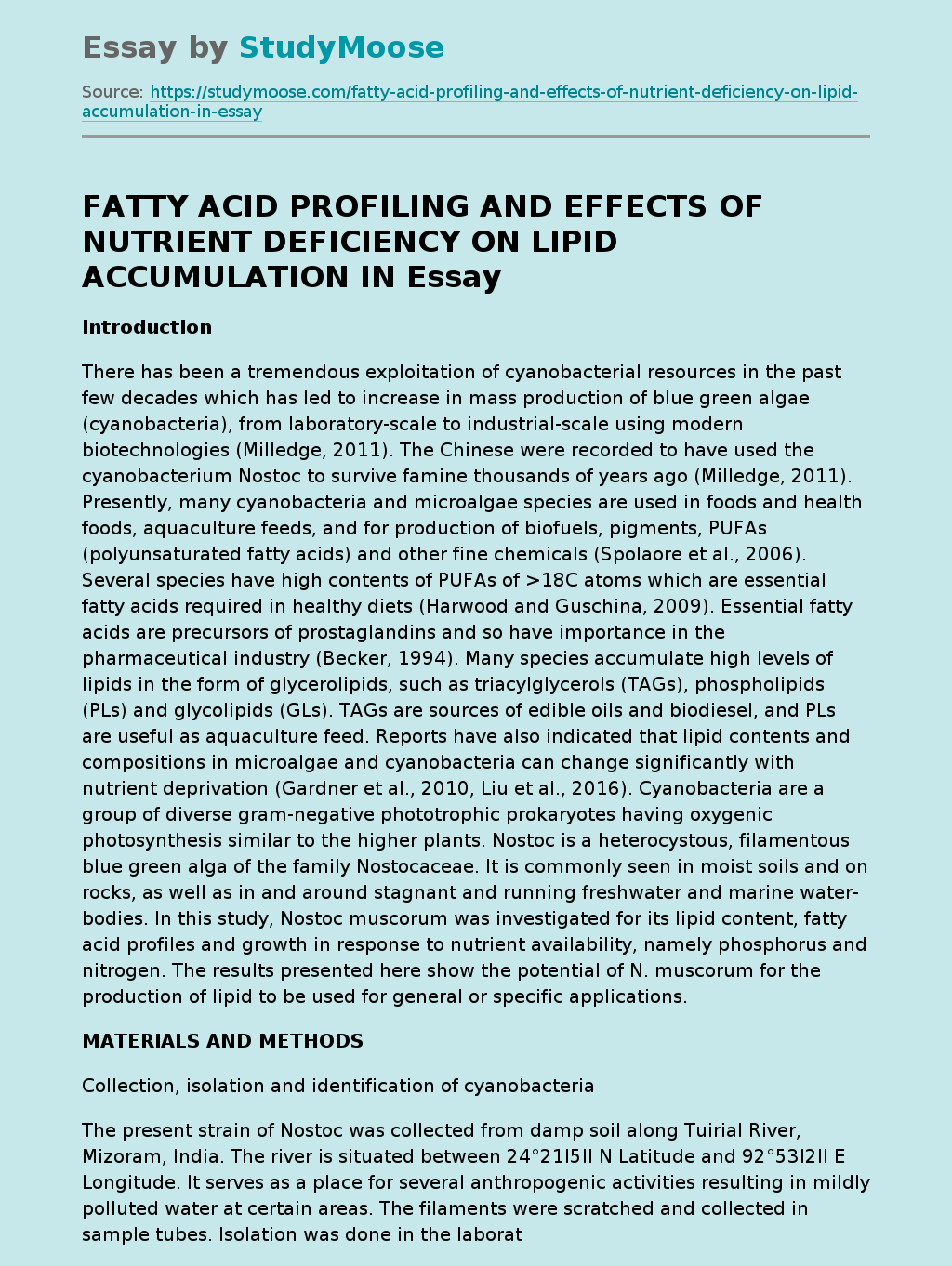