Father Flynn has a talent for telling a parable. He is forcefully open to specific events that he recently encounters. As the play opens he expresses main points in the theme using a parable, to teach a lesson of doubt, and to not fear doubt. This sermon foreshadows the dramatic ending to the conclusion of the play but throughout sets a tone for questioning each character and their opinion.

As Father Flynn opens his first sermon with a question that insinuates doubt, by asking “What do you do when you’re not sure?” (p.

Don't use plagiarized sources.
Get Your Custom Essay on Father Flynn’s Parables Just from $13,9/Page

1939) I believe he is also asking the congregation to open their minds up to the fearful thoughts of someone who is isolated and doesn’t know where to turn for the right answer, because everything they have been taught has now brought them to a desperate and questionable place in their lives. He is seeking to bring them together even when they do not understand someone or a situation.

He suggests despair can describe a type of doubt, and in despair, “Your bond with your fellow beings was your despair.” (p. 1939) The fear of doubt can isolate someone and seeking approval or guidance can be difficult when someone feels they are alone. He uses the example of “You seeing the world through a window. On the one side of the glass: happy, untroubled people. On the other side: you.” It is a difficult thing to hit a point in life and question everything you have ever been taught. The person that is growing into an individual with opinion and preferences is gradually realizing that the world isn’t black and white. There are rules that we follow in society or in a church community and as strict as those rules could be followed the human instinct to follow preference in life becomes more important.

However, the fear of going against something that has always been taught to be the only way to achieve something in life or be successful in life can lead us back to the beginning. Where our roots began, which in this case Father Flynn uses the example in his first sermon where he says, “being of nautical discipline, turned his eyes to the heavens and read the stars.” (p.1939) At the moment that there is no clarity in the decisions that can be made in life the seriousness of doubting everything someone knows becomes so scary that they don’t know what to do after starting from the beginning and still not getting results. When Father Flynn addresses that the sailor,” thought he was on course but there was no way to be certain”,(p.1939) the sailor is left in a state of doubt not only because there was no definitive way to be sure he was on the right path but also further questioning the thought process behind following stars and how reliable it truly was. Throughout doubting, unlike in the sailor’s case, Father Flynn encourages that bonding and not turning away from those who doubt circumstances in life is more gratifying than leaving one person isolated. The support, even if it is just one person, as we later see in the play, can be enough reassurance for someone to restore their faith, or make it through a difficult time.

In Father Flynn’s second sermon there is no question about what and who he is addressing. The play has now escalated to confrontation about assumptions, and with those assumptions there have been many displays of doubt that is trying to be proven by Sister Aloysius. She believes that Father Flynn is a child molester and a certain child has been targeted because of his circumstances. He is very clear about this when he opens his sermon saying, “A woman was gossiping with a friend about a man she hardly knew.” (p.1955) Sister Aloysius has made very serious accusations about Father Flynn and he recognizes that her determination and the doubtfulness of the evidence that could go in his favor or against him put him in such a negative predicament that he has to protect himself. Not only does he now doubt her and her judgment of people because she does not see him for who is really is and trust him, but he now sees that she does not really know who he is as a person.

He foreshadows Sister Aloysius’ doubt in this next comment from the sermon saying, “She was immediately seized with an overwhelming sense of guilt,”(p.1956) when she had a dream that the hand of God appeared over her and pointed down on her. Immediately the woman starts to doubt that she has been following the right path and God’s word and has to ask, “Is gossiping a sin?”(p.1956) This is something as Christian that anyone should know however the woman needs confirmation. Father Flynn later states that through gossip this woman has, “played fast and loose with his reputation, and you should be heartily ashamed!” Sister Aloysius could seriously ruin Father Flynn’s reputation which he recognized immediately. She had no concern for him so she did not care what she said about him and how it could affect him and his reputation or even the truth of the matter she was trying to resolve.

As a result of Sister Aloysius’ determination to get rid of Father Flynn not only does she not get the answers she needed to be sure of his behavior, she can only wonder that with his new promotion and new placement still in the priesthood that she could have been very wrong. Or maybe that she was right and he just knows how to work the system. Either way she still ends the play with doubt of her beliefs as Father Flynn continues on without doubt that he did well and handled the situation as best that he could. 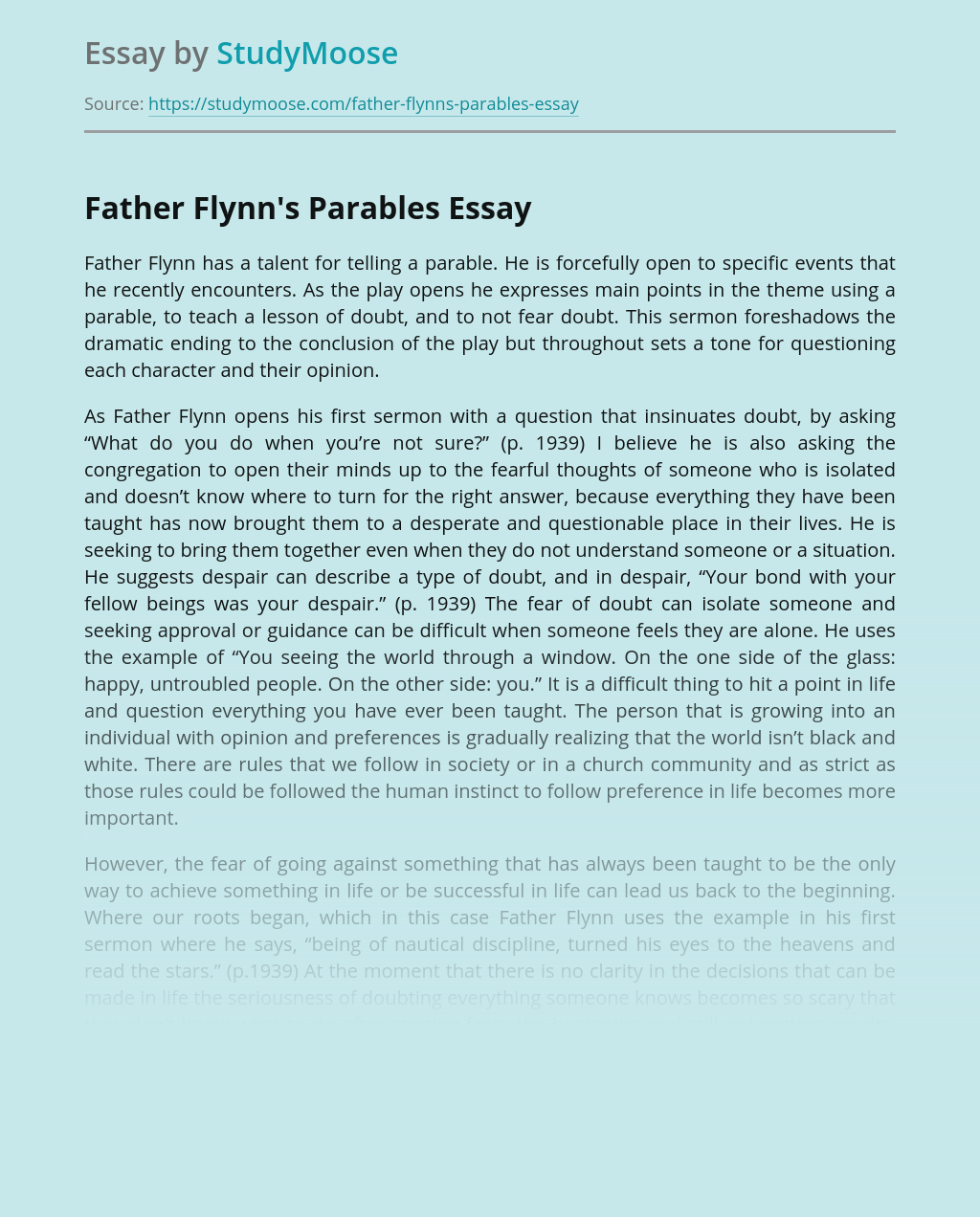 “Sredni Vashtar” is a short story composed by Saki (Hector Hugh Munro) in between 1900 and 1911 and initially released in his book The Chronicles of Clovis. It has actually been adapted for opera, film, radio and tv. The story concerns a ten-year-old boy named Conradin, who lives with his rigorous cousin and guardian, Mrs....

Chapter OneA General Introduction to Folk Customs 1. Folk customs: a definition Folk customs, or folk ways, comprise the part of cultural life that people of a country or nation have created, practiced and transmitted in their endeavors to satisfy their needs at various stages of their history and society. Deep-rooted in the cultural life...

Religion is defined as a belief in a divine or superhuman power or higher being to be worshiped as the creator of the universe. Many of the characters have strong religious beliefs, but will not practice any form of superstitious behavior. Both the Widow Douglas and Miss Watson share a common belief in God but...

It was Ninian Smart, a renowned expert on religious studies, who came up with the six dimensions of religious worldviews, mainly experiential, mythic, ritual, doctrinal, ethical, and social. We will now use this model to examine in-depth, the Pentecostal religion. The Pentecostal movement within Evangelical Christianity places special emphasis on the direct personal experience of...