Fate Theme in "Romeo and Juliet"

Romeo and Juliet were star-crossed lovers, but was their fate decided or did they choose their own? In this essay, fate in the stars will be discussed as well as if Romeo and Juliet had any say in their destiny, Romeo winning or losing against fate will also be examined in addition to metaphors of stars and fate and how these played a major role in William Shakespeare’s Romeo and Juliet.

In Shakespeare’s time (the Elizabethan Era) fate was believed to be something people were unable to stop or to control.

Don't use plagiarized sources. Get your custom essay on
“ Fate Theme in “Romeo and Juliet” ”
Get custom paper
NEW! smart matching with writer

This unrelenting truth would usually refer to a higher power (in the Renaissance Era, they believed that God created all and was responsible for their destiny, how their lives came to be as well as how their lives ended). The stars were well known for playing a key role in how fate was decided or made. It was often told that destiny was planned out beforehand by a supreme spirit.

According to Erind Flow on Owl Location, “One meets his destiny often in the road he takes to avoid it”. This French proverb is a good way to explain the way the Elizabethans thought about fate and is a suitable take on the story of Romeo and Juliet and how their tragic story unfolded and eventually ended in their demise.

In this day and age, fate means something else. The Longman Dictionary of South Africa describes fate as, “things that will happen to someone” and “a power that is believed to control what happens in peoples lives”.

Although both definitions sound similar, the one of the Renaissance Era is more intertwined with the stars and planets whereas the present-day description is more of something that has no ties to astrology and is considered to be more factual ( this is because people now know that fate has nothing to do with the stars). Some may describe fate as luck, or doom, depending on their own personal experiences. Most people, now-a-days, however, do not believe in fate but rather believe in the power of free will. The Elizabethans did not believe in free will, that you could change your destiny with one decision. (free will is described as, “the power of acting without the constraint of necessity or fate; the ability to act at one’s own discretion” according to Longman Dictionary of South Africa).

William Shakespeare loved to put fate into many of his stories. An example would be one of William Shakespeare’s most loved and personal plays, Hamlet. It was Hamlets choices that lead him to his destiny, choosing to avenge his father’s killer rather than announcing it to the whole kingdom and letting his father’s executioner deal with the consequences of the law. This leads up to him dying after having successfully killed Claudius. However, Hamlets fate was written from the moment that Claudius chose to kill Hamlets father (Old King Hamlet). From there, it was Hamlets obligation to execute his father’s murderer, which happened to be his uncle and step- father. This shows how Shakespeare loved to put the idea of an inescapable destiny into his plays so the main protagonists would reach their fate regardless of their own actions.

The Longman Dictionary of South Africa defines a metaphor as, “a way of describing something by referring it to something else”. Fate in the stars refers to how the Elizabethans thought that the future was foretold in the heavens. If it was written or foretold in the stars, then it would be considered to have been pre-planned by a higher power. Romeo and Juliet were fated to die at the beginning of the play. The chorus, in the prologue (1.1.6), stated that their fate was inevitable (“A pair of star-crossed lovers take their life”). It was explained that their end was intentional and planned by an elevated being. William Shakespeare calls Romeo and Juliet “star-crossed lovers” (1.1.6) which means that they were not meant to be. Romeo pronounces that, “Some consequence yet hanging in the stars” (1.4.105). In this line, Romeo is declaring that he leaves his future up to the stars (he leaves his life up to God, whom the Elizabethans believed controlled their destiny). Before going in to crash the Capulets party, Romeo verbalises his concerns, that something momentous and astonishing is going to happen soon, “Some consequence yet hanging in the stars” (1.4.114).

Once Romeo hears of Juliet’s “death”, he says “Then I defy you stars!” (5.1.24). Romeo, here, tries to challenge fate. In doing so however, he ends up completing what was foreshadowed at the beginning of the play. When Romeo aims to go against fate, but he does not understand that he cannot cheat his destiny. The denial of his future ends up just as the chorus has said it would, with him taking his own life. Romeo and Juliet try to fight their destiny, but they do not know that their destiny ends up controlling them by letting them believe they are in control.

The writer of this essay does not believe that Romeo is winning against fate. The student thinks Romeo has lost the war against fate. The writer believes that this is because he ends up completing the prophecy told by the chorus at the start of the play. Romeo tries continuously throughout the play to defy fate but in doing so, he ends up completing it. Romeo and Juliet were opposed by the stars from the very beginning. That is, after all, the meaning of star-crossed lovers. This means that fate was against them all along and they had no choice in the matter. They were meant to fall in love and die. Romeo may have thought at one time that he was going against his fate/ the stars and was going to win. However, that was not the case. He ended up going towards his fate rather than going against it.

The student believes that fate decided that Romeo and Juliet must die in order for their parents awful and long feud to end, by letting the feud die with Romeo and Juliet. This would have been the most tragic, but effective way to ensure that the Capulets and Montagues vendetta is buried. Just as they have buried their only children. At the end of the play, that is exactly what happens.

To conclude; in this essay it was debated and concluded that Romeo lost against fate as he and Juliet ended up dead, that fate was considered to be inevitable and unavoidable even though they tried to fight against it and the metaphor meant that fate was foretold in the stars and planets. Romeo and Juliet were unable to make their own decisions about their lives and how it would end, but their tragic end allowed a new path to be created for a feud- free Verona.

Fate Theme in "Romeo and Juliet". (2020, Sep 09). Retrieved from https://studymoose.com/fate-theme-in-romeo-and-juliet-essay 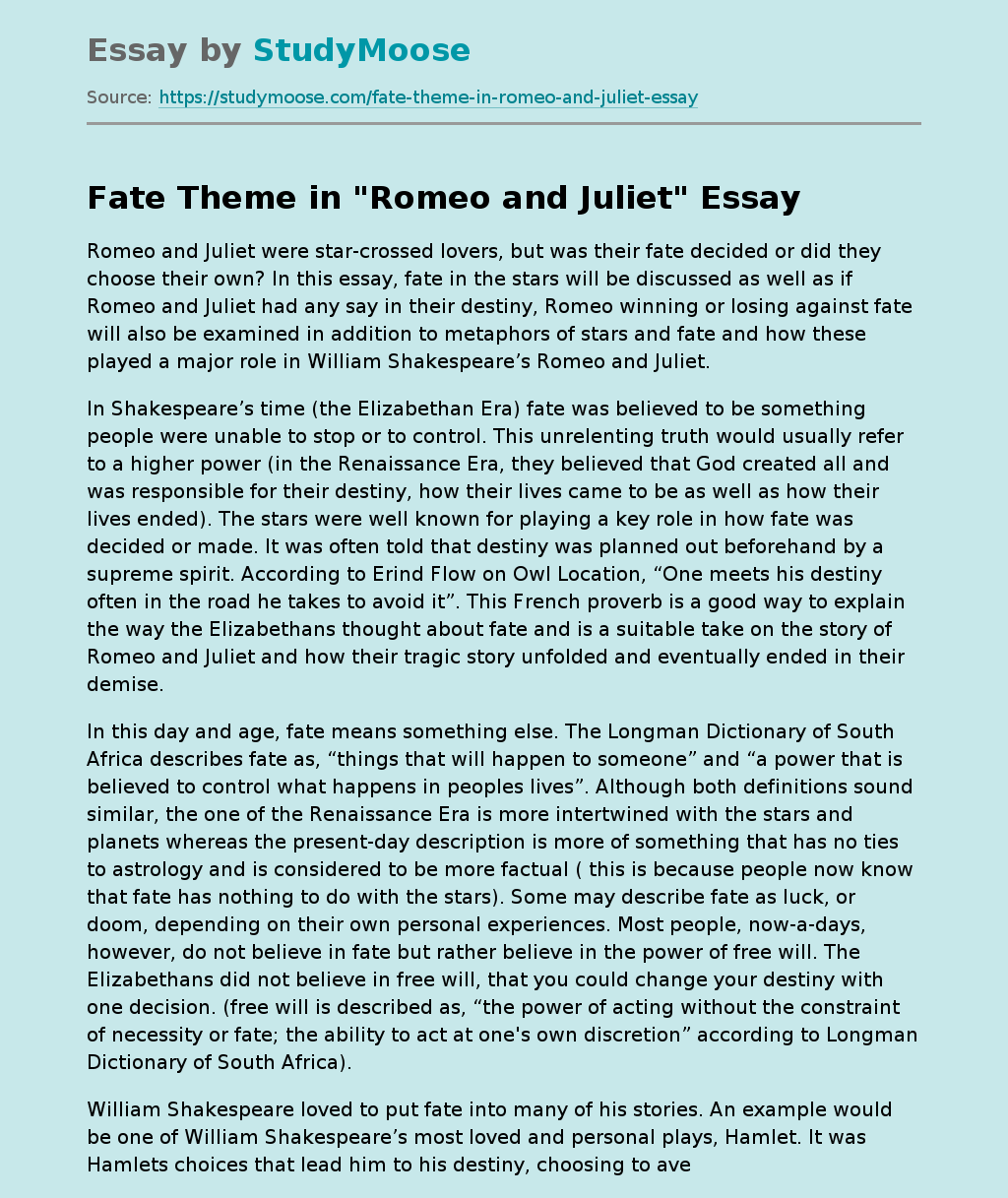