Fallacies and Mistakes in an Advertisement

In political races in the United States logical fallacies are a staple in political ads. The 2012 election was no exception to this convention, especially being true in an advertisement with ex-steel plant worker Joe Soptic, speaking in Obama-affiliated Political Action Committee Priorities. The advertisement included many logical fallacies to argue against the Romney campaign. Those include post hoc reasoning, ad hominem, and slippery slope. The advertisement consisted of just one man, Joe Soptic, an ex-steel plant worker, of GST Steel, speaking against Mitt Romney.

Don't use plagiarized sources. Get your custom essay on
“ Fallacies and Mistakes in an Advertisement ”
Get custom paper
NEW! smart matching with writer

He personally points blame on Romney for the death of his wife. He says that when “Mitt Romney and Bain closed the plant, I lost my health care, and my family lost their health care, and a short time after that my wife became ill.” He then proceeds to say that she passed aways twenty-two days after taking her to the Jackson County Hospital of cancer.

The advertisement ends with Soptic saying that Romney “doesn’t realize what he’s done to anyone, and furthermore, I do not think Mitt Romney is concerned.

” Priorities USA Action paid for the advertisement as well as responsible for the content. The logical fallacy of post hoc reasoning is the main base of this advertisement. Post hoc reasoning being that there is an argument being made that one event cause the other when they are unrelated. The argument is that because Romney and Bain Capital closed the plant, Soptic’s wife died. These events are unrelated because Soptic’s illness was not the cause of Romney and Bain Capital closing down the plant.

The addition that his wife “passed away in twenty-two days,” to the post hoc fallacy in the advertisement.

An additional post hoc fallacy is the fact that Romney had left Bain Capital two years before GST Steel closed. This further disconnects this argument from the Romney campaign. Another logical fallacy that is present throughout the advertisement is ad hominem. Ad hominem being the attack of the character of the arguer rather than the argument itself. The one minute long advertisement starts with an ad hominem with Soptic saying that “Mitt Romney doesn’t understand what he’s done to peoples’ lives by closing the plant.” This is a direct attack on Romney on not only character but a slight attack on intelligence. In addition there was a caption in the video short after the previous statement by Soptic, claiming that “Mitt Romney and Bain Capital made millions for themselves and then closed the plant.” This is implying that Romney and Bain Capital are greedy.

This has no relation to the topic of Romney’s political views and is merely an attack on character. Furthermore the advertisement ends with Soptic stating that he does “not think that Mitt Romney is concerned” about the well being of workers of the plant. The last piece of logical fallacy that is present in the advertisement of 2012 is slippery slope. This is when it is asserted that one event will inevitably be followed another with question or argument.

Slippery slope is implied in this advertisement in the way that if Romney is in charge, he will shut down businesses, which will disable people to receive health insurance, which will cause many deaths. This is improbable in the way that one event does not necessarily cause the other and predominantly, is highly unlikely. Logical fallacies are common in the political races in the United States, whether they’re in advertisements or in a speech given by a candidate.

Fallacies and Mistakes in an Advertisement. (2016, Apr 23). Retrieved from https://studymoose.com/fallacies-and-mistakes-in-an-advertisement-essay 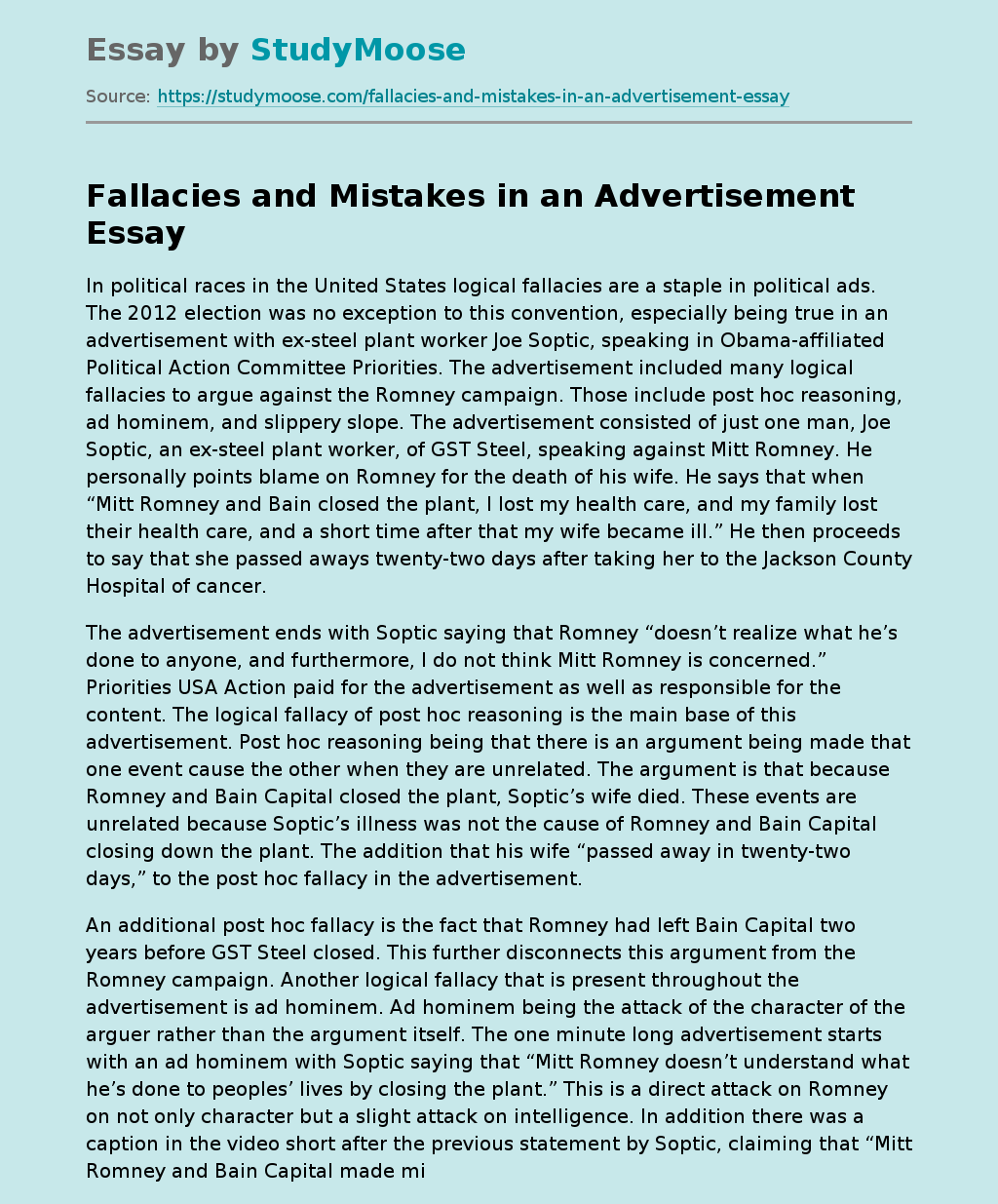