Gandhi’s Salt March of 1930 was ranked by Buzzworthy.com as the number one protest that changed the course of history forever. The Salt March was a twenty-four day protest to the British Salt Act of 1882. The act prohibited Indians from collecting or selling salt which was a colossal part of their diet. Indian citizens were forced to buy salt from their British rulers with a heavy tax. The act resulted in the British having a monopoly over the manufacture and sale of salt.

Don't use plagiarized sources. Get your custom essay on
“ Facts About Gandhi – Gandhi’s Salt ”
Get custom paper
NEW! smart matching with writer

During the march, thousands of Indians followed Gandhi for two hundred and forty miles. Gandhi, along with sixty thousand people, were arrested because of the march. India was finally granted independence from Britain in 1947. Gandhi’s Salt March of 1930 is one of the most prosperous protests in the history of the world because they were able to overcome their adversity with Britain.

There are dozens upon dozens of types of protests and they happen for countless different reasons.

Proficient in: Biography Of Mahatma Gandhi

Basically, “protest” is an umbrella term for many different forms of expression of opposition. Typically, this takes form either passively or actively. Passive Action, or Passive Protest, is appealing for change within a system’…’ Direct Action is not seeking an appeal from a system, but defying it.

Direct Action seeks to refute a system’s power and act on the changes, instead of appealing for them (1).

Block quote Passive protest can be done in numerous ways, but when a protest is passive, the intended message is received without disturbing the system. An active protest, on the other hand, is pretty much the exact opposite. It is acting and refuting on the desired change in the system rather than appealing change. All successful protests use both passive and direct actions. However, protests are remembered for which type was used more. Gandhi’s Salt March would fall under the direct protest category because he was ignoring and impeding the government and he was carrying out the change that he wished to see. Protests are such a significant part of a democracy. Protests give the people the power to have their voice heard.

According to the American Civil Liberties Union, a nonprofit organization whose purpose is to defend and preserve the individual rights and liberties guaranteed to every person in this country by the Constitution and laws of the United States, “The right to join with fellow citizens in protest or peaceful assembly is critical to a functioning democracy and at the core of the First Amendment” (1). The First Amendment is single handedly the most important amendment of them all and protests are a direct reflection of the tremendous power that citizens of America have. However, there are always rules within the rules and that is, law enforcement can sometimes violate this right and get away with it. In some cases, police crack down on protests through mass arrests, illegal use of force, or curfews, as well as many other ways. Citizens of India have freedom of speech as well, but during the Salt March, the police arrested sixty thousand people.

Gandhi faced a substantial amount of adversity from Britain throughout his march. During the Salt March, British did everything in their power to hold back Gandhi and his march. One of the leading efforts was the British government arresting sixty thousand people. Ken Pletcher, Senior Editor of Geography and History for Encyclopædia Britannica stated, “The march on the saltworks went ahead as planned on May 21, led by the poet Sarojini Naidu, and many of the some 2,500 peaceful marchers were attacked and beaten by police. By the end of the year, some 60,000 people were in jail” (1). The British police tried to hold back Gandhi and his protesters by doing anything they could to slow them down. They became so desperate that they even attacked some protesters.

The march continued on while the police just kept on abusing them. They battled through this adversity until they got what they wanted: the Salt Act to be vanished. The British police were just one of the adversities that Gandhi had to face during his march. As stated earlier, sixty thousand people were arrested during the march. Gandhi himself was even arrested, but the satyagraha continued without him. Evan Andrews, writer for the History Channel wrote, “Gandhi was taken into custody on May 5, after he announced his intention to lead a peaceful raid on a government salt works at Dharasana. But even with their leader behind bars, his followers pressed on. On May 21, some 2,500 marchers ignored warnings from police and made an unarmed advance on the Dharasana depot” (1). The British police were back at it again. This time, they arrested the Indian leader himself, Mahatma Gandhi. The arrest of Gandhi was just another attempt to slow down or even end these protests. Like before, it did not stop them from protesting for what they wanted: protests continued.

The long-term result of the Salt March was a success as India won independence from Britain in 1947. The whole reason why the Salt March happened was because it was a protest to the Salt Act enforced by Britain. By India becoming independent, it meant that Britain no longer had control of them so Indians could do whatever they wanted to do. The reason why the independence of India was so important is because it meant that India can collect and sell as much salt as they wanted. According to the authors of history.com, “Gandhi returned to his native country in 1915 and soon began working for India’s independence from Great Britain” (1). The Salt Act had been enforced in 1882. Thirty-three years later, Gandhi arrived back in India with the goal of gaining independence from Britain.

Fifteen years after he arrived, he started his Salt March and seventeen years after that, India had gained their independence from Britain. There is undeniably a direct correlation to what Gandhi did and India becoming independent. Mahatma Gandhi was a massive reason why Britain no longer wanted to control India. Gandhi’s Salt March was successful because it played such a substantial role in India’s dreams of being independent from British rule. Gandhi’s Salt March was also a success because his courageous actions inspired people around the world.

The authors of biography.com claimed, “Even after Gandhi’s assassination, his commitment to nonviolence and his belief in simple living — making his own clothes, eating a vegetarian diet and using fasts for self-purification as well as a means of protest — have been a beacon of hope for oppressed and marginalized people throughout the world” (1). Gandhi set an outstanding example for people of all backgrounds to look up to. He made the oppressed and poor have hope that they can go on to do tremendous things with their lives even if they did not have anything. Gandhi’s actions even inspired future human rights movements around the globe, including the likes of civil rights leader Martin Luther King Jr. and Nelson Mandela.

As successful as the Salt March was, it was actually unsuccessful at one point in time. It was not until around ten months after the march occurred that Gandhi and the Indians saw anything positive come from the march. Before that, all that had happened was arrests upon arrests of Indian people. It looked as if it was going to be a gigantic failure in the beginning. Britain was not giving in whatsoever to the people. Jan Lahmeyer, statistician for popustat.com as well as a graduate from Harvard claimed that the population in India in 1930 was 277,175,000 (1). As stated earlier, somewhat sixty thousand people were arrested during this march. Sixty thousand is roughly two percent of India’s population in 1930. Two percent may not seem like a lot but to put it into perspective, two percent of India’s population today is almost two point seven million people. All of these people were arrested and no progress was made so the march was an enormous failure at first.

Not only did the march not go so well for India, but other powers around the world looked down upon the march as well. According to Evan Andrews, Winston Churchill—no great fan of Gandhi—would later admit that the protests and their aftermath had ‘inflicted such humiliation and defiance as has not been known since the British first trod the soil of India’” (1). Winston Churchill was the prime minister of Britain around this time and he did not think so high of Gandhi. Part of the reason could be because he led Britain and Gandhi was protesting Britain, but lot of people simply disliked him because of his actions only because they had contrasting views as him. People disliking him was not a huge deal only because this did not affect his actions and his legacy. It was not until several years after Gandhi’s Salt March that he became so respected and looked up to.

Gandhi’s Salt March of 1930 was able to overcome so much adversity from Britain and because of that, it makes his march one of the most successful protests in the history of the world. There are various types of protests out there that can be used in so many different ways and situations. The amount of adversity Gandhi faced from Britain during his march is unreal. The British police did everything in their power to slow down Gandhi and his people, but they failed. The Salt March was a monumental success long-term as it eventually led to the independence of India and also inspired so many people around the world. As much success came from the Salt March, it was actually a monstrous failure in the beginning. At the end of the day, the reason why Gandhi’s Salt March was ranked as the one primary events that changed the course of history forever is because of the extensive impact it had on the world. 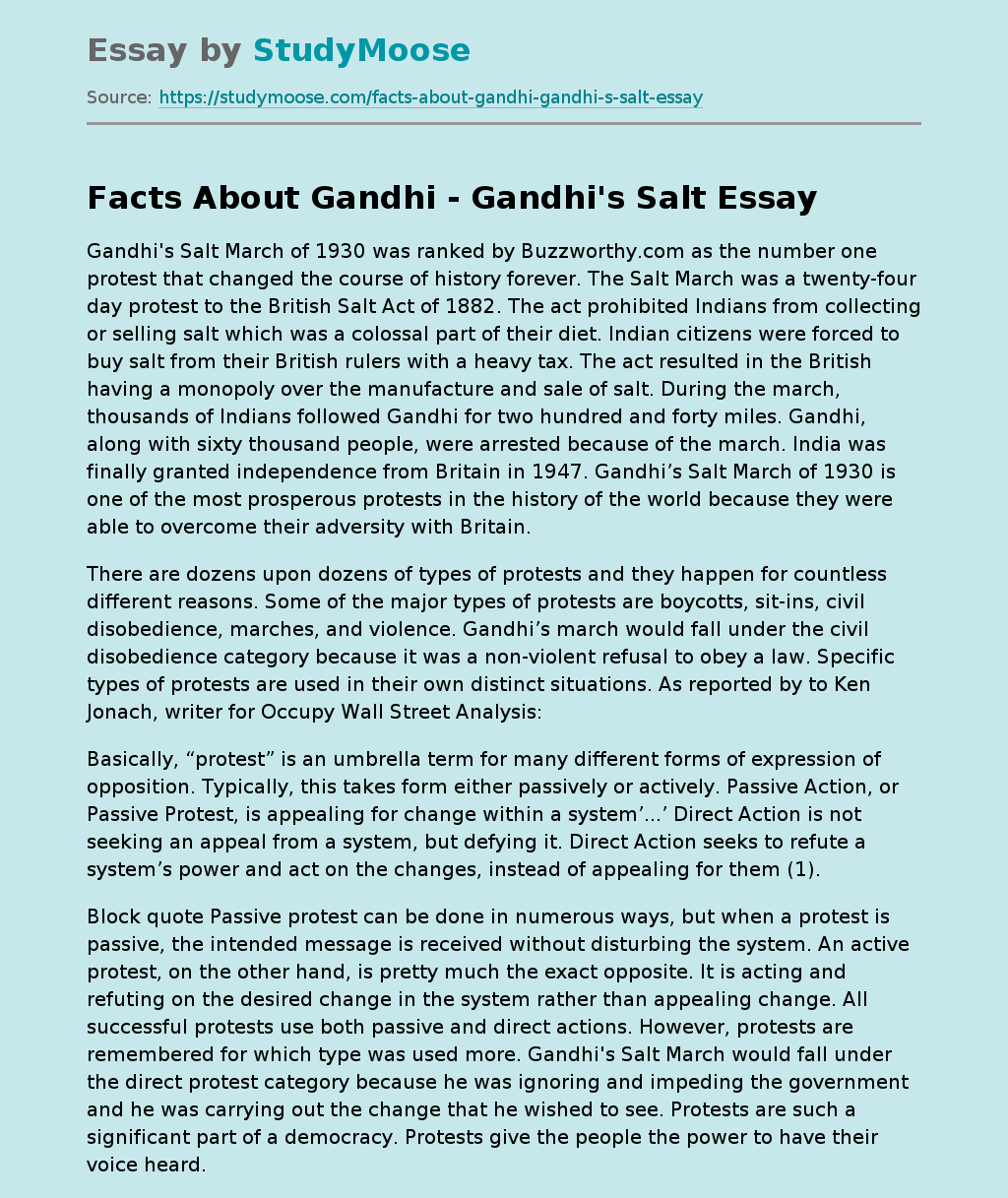