Explain, with use to the Biblical and church teachings, what Christians believe about the "sanctity of human life."

So God created man in his own image, in the image of God he created him; male and female he created them. God blessed them and said to them,” Be fruitful and increase in number, fill the earth and subdue it.”

The sanctity of human life is something that is to be respected. It is the

appreciation of life itself and is something which the Catholic Church believes is a gift from god and that it is something that no one but God has the right to take it away.

Don't use plagiarized sources. Get your custom essay on
“  Explain, with use to the Biblical and church teachings, what Christians believe about the “sanctity of human life.” ”
Get custom paper
NEW! smart matching with writer

The origins of the Christian belief about the sanctity of human life can be seen in the bible; “Do you not know that you are God’s Temple and that God’s Spirit dwells in you? If anyone destroys God’s temple, God will destroy that person. For God’s temple is holy, and you are that temple.”

This quotation, from the book of Corinthians, suggests that to take the life of another human being is something that for God is a punishable crime and that the Sanctity of Human Life is to be kept sacred and holy.

“Your body is the temple of the holy spirit”,

For this reason it would be wrong and against Christian teaching to commit suicide or to take another human life. Also the fifth commandment is, “You shall not kill”, (Exodus 20:13)

So it is clear from the bible that human beings are not meant to choose when it is they’re supposed to die.

“Life and death, poverty and wealth all come from God” (Ecclesiastes 11:15).

God is our creator and is the giver of life and he alone will decide when we are to return to him.

Pope John Paul VI said, “Human life is sacred,” “All men must realise the fact” and in the Catechism of the Catholic Church (1994), it states that; “human life must be respected absolutely from the moment of conception. From the first moment of his existence, a human must be recognised as having rights of a person”

The Presbyterian Church believes that comforting a dying person through the process of dying, is much better than opting for a quick death; “Life is God’s gift and the decision of how to end it is not ours to make- we should be helping one another live through the dying process, not encouraging others to seek death as a solution”. This, once again, backs up that the Sanctity of human life is sacred and that human lives should not be at the mercy of humans, but at the mercy of God.

Human life is a sacred gift from God and the sanctity of human life is something to be kept holy. The mercy of a human should never be what determines the life or death of a fellow Human. God gives us the sacred gift of life, and is the only one who can decide when it is to be taken away. “No one has the right to take away life, not even ones own” (Salvation Army)

AO2: Faced With Abortion, explain the differing ways that Christians might respond.

In the Christian Church there is diversity of opinion on abortion. All Christians take their teachings from the Bible, but each separate Church has its own official teaching and a Christian has the right to agree or disagree with it.

This quotation, taken from the Catechism of the Catholic Church 1994, explains that the Catholic Church believes that, “human life must be respected and protected from the moment of conception” and “From the first moment of existence a human being must be recognised as having the rights of a person among which is the inviolable right of every innocent being to life”.

Within this teaching, abortion can never be justified. Roman Catholics believe that life begins at conception; they completely disagree with abortion at any stage of the pregnancy. They also believe that a new human being is innocent and has the right to life.

This is a pro-life point of view that the Catholic Church teaches. Pro -life is the name given to opponents of abortion. It stretches to the extent, that someone who has an abortion could face excommunication from the Catholic Church.

However the Doctrine of Double Effect is a theory that if something that will have the effect of, but not the intentional, killing of the unborn foetus, (e.g. removing a cancerous tumour), then it can be condoned as the aim is not to kill the child, but to save the mother. Pope Pius XII said, “To use every means possible to save both the mother and the child.”

There are different beliefs within the Christian faith about abortion; Catholicism, take a complete and total pro-life opinion on the subject, as mentioned above, saying intentional abortion can never be justified and that every child has, “The right to life”

The Anglican Church believes that, “Every Human life, created in the divine image, is unique… and that this holds for each of us, born or unborn.” So they are opposed to abortion on demand and the (non-justified) killing of an unborn child. However they do believe that in, “circumstances of extreme distress or need,” then abortion can be justified, and that “In an imperfect world then the, right, choice is sometimes the lesser of two evils. An example of his is if the child is going to suffer an extreme mental or physical disability, in which case the parents’ worry could be the welfare of the child when they are no longer there to protect them. The world is not a perfect place and cannot always be trusted to take care of the ones we love, so therefore it is out of fear of the person’s welfare that the abortion could be justified. Another example would be, if the child were likely to die.

The Church of Scotland says; “Abortion has no moral justification,” as it represents the, “Unwarranted destruction of human life that is made in the image of God.” However they are careful to point out that this is only true in the “great majority of cases” and not in every case. For example the Church of Scotland believes that if a woman becomes pregnant as the result of rape, then the abortion is justified.

The Presbyterian Church says that, “From its earliest days in the womb, the unborn child is fully human, a person made in the image of God.” So, unwarranted abortion can never be acceptable. However they do also believe that, if a pregnancy is not justified, (e.g. if the pregnancy was a result of rape or incest), if there is any sign of severe mental or physical deformity to the child or if the health of the mother is in jeopardy, then abortion can be justified.

The Methodist Church says that, “Our belief in the sanctity of an unborn human life makes us reluctant to approve abortion. But we are equally bound to respect the sacredness of the life and well-being of the mother, for who devastating damage may result form an unacceptable pregnancy.” So in saying that the life of the unborn child is sacred, it is equally, and possibly more important that the mental and physical well being of the mother does not suffer. Methodists in particular have pointed out also, that personal and social factors need to be considered in each individual case, and that they may be a justifiable reason for abortion.

My conclusion is that all churches say that unwarranted abortion of an unborn child is wrong, however all but the Catholic Church says there are extenuating circumstances when abortion can be justifiable.

AO3: “Abortion should not be allowed by law in a truly Christian Society!” Do you agree or disagree? Give reasons for your answer showing that you have looked at more than one point of view.

Abortion should be made illegal, as it is the intentional taking of a human life, which is sacred, and a holy gift from God. This would be the opinion of the Catholic Church in general.

In parts of western society it is illegal to take the life of another human being, and if one believes that human life begins at conception, (as the Catholic Church does) then how can abortion be any different from murder?

Women in fragile states of mind, that have abortions, should be given counselling, and should be well informed about the other options they could take if they are not capable, or are not ready, to raise a child. E.g.: adoption/ foster care for their child, before they choose to end the life of the innocent child.

In Ireland abortion is illegal. So to actually have an abortion (Legally), you must leave this country and go to another to have it performed. Does that not suggest that abortion is wrong? If you cannot get it done in your own country?

Doctors take a Hippocratic Oath to protect life, killing and innocent child is not protecting life; it is destroying it.

However there are some aspects of abortion that should also be considered before making it illegal:

Many Christians do live in countries, (for example the U.K), in which abortions are legal, but have strict rules and guidelines, and it is usually a last resort for the mother. If these countries can live in junction with legalised abortion, then sure Ireland could too.

Abortion can be the most loving thing to do for the child, (if it were expected to die or lead a life of hardship); to have an abortion and the law should not have control over a woman’s fertility.

God created man with free will, and although life is a sacred gift, so is the ability to choose for ourselves what we are to do with ours. So if a law dictates to us what we have to do in a certain situation, this takes away this other sacred gift from God.

Societies today have people with many different religious beliefs, cultures and practices. Sectarianism is illegal, so is forcing our law of abortion onto a religion that says that abortion is acceptable not sectarianism?

In conclusion, I believe that abortion should be made illegal, as it is the taking of an innocent human life. This is something that any culture or religion in the world says is wrong. It is a sacred gift from God and nothing/ no one should be able to take that away.

Explain, with use to the Biblical and church teachings, what Christians believe about the "sanctity of human life.". (2020, Jun 02). Retrieved from https://studymoose.com/explain-use-biblical-church-teachings-christians-believe-sanctity-human-life-new-essay 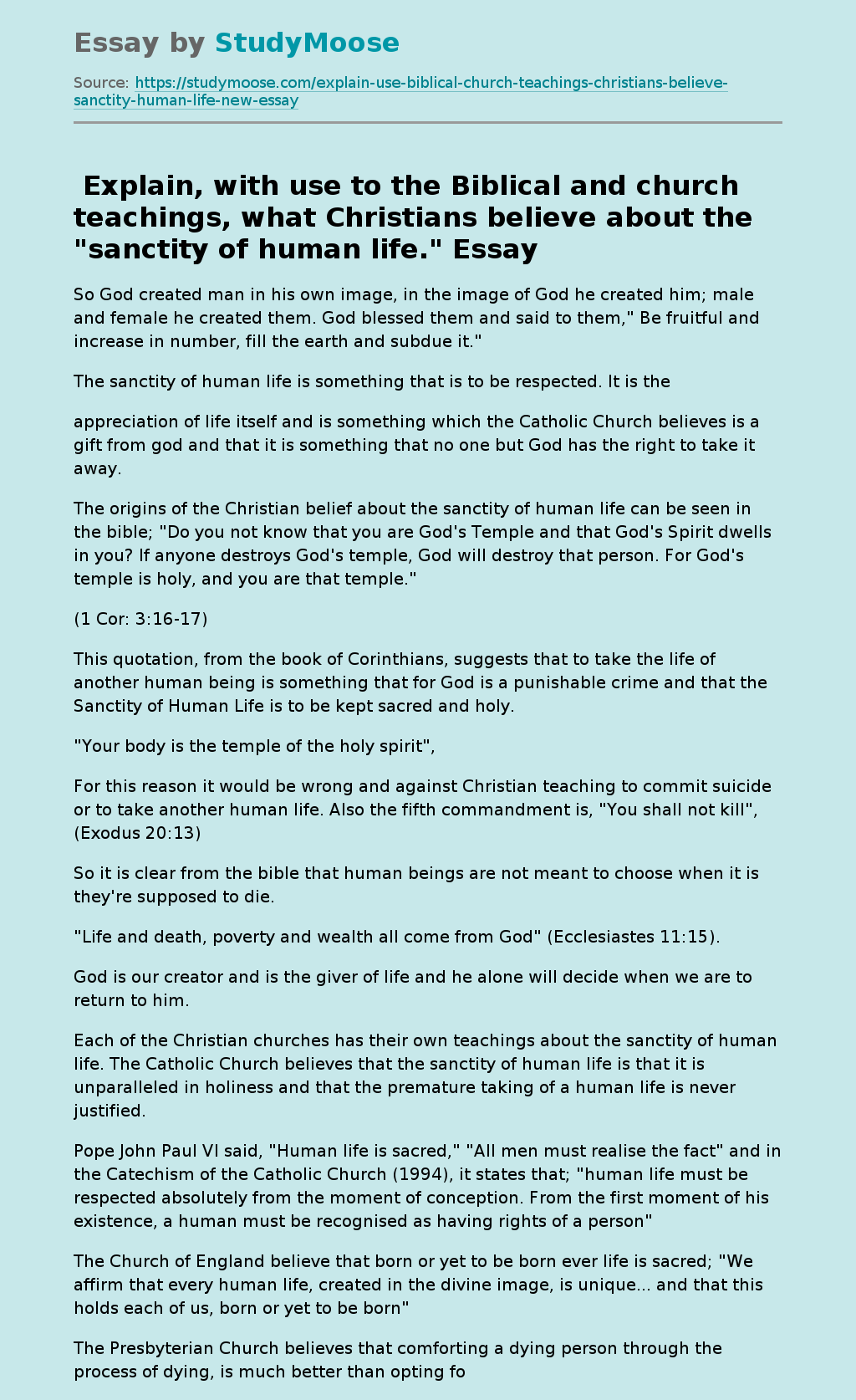