An Examination of Clever Words - "Emma" By Jane Austen

When Jane Austen wrote her novel Emma, women had very limited options available to them for bettering their positions in life. As shown in the novel, the primary method for securing one’s future as a woman was through marriage. A “good marriage” could raise a woman to a higher social or economic level, but this usually could only be achieved if she were intelligent and clever. Clever word games were a way for women to reveal or conceal their feelings within the confines of social politeness, allowing them to flirt with men, diminish rivals, or hide secrets.

Don't use plagiarized sources. Get your custom essay on
“ An Examination of Clever Words – “Emma” By Jane Austen ”
Get custom paper
NEW! smart matching with writer

In her novel Emma, Jane Austen examines the attribute of cleverness in women, and presents cleverness as a generally positive character trait that could enable women to change their social and economic status.

A women’s intelligence, often-displayed though clever word games, was often a means of achieving a marriage that raised her socially or economically. For this reason it is Emma, and not her friend Harriet, that receives the affections of Mr.

Elton. Emma tries to match Harriet and Mr. Elton together for the purpose of securing Harriet’s financial future and solidifying her position in Emma’s social level. Because it is Emma that uses word games with Mr. Elton, even though initiated on Harriet’s behalf, the word games mislead Mr. Elton to believe that Emma has feelings for him.

For example, in chapter six Emma, in the course of her conversation with Mr. Elton and Harriet, refers to their common singleness by saying “there are no husband and wives in the case at present” (Austen, 95).

By her emphasizing the words “at present,” Emma meant to hint at Mr. Elton and Harriet’s betrothal, rather, because the word game came from her, Elton was mislead into thinking that Emma was interested in him for herself.

Emma’s friend Mr. Knightly even warns Emma that Mr. Elton would never be interested in Harriet because she is not intelligent enough, saying, “Men of sense, whatever you may choose to say, do not want silly wives” (Austen, 137). It was with a word game that Mr. Elton first tried to reveal his intentions towards Emma. Harriet was compiling word games into a book, and Emma, in an effort to ingratiate Harriet to Mr. Elton, asked him to compose his own riddle for contribution. Mr. Elton took Emma’s request to heart and created a charade for Emma that expressed his desire to court her.

Ironically, though Emma was convinced the word game was for Harriet, it was Emma that deciphered its meaning. Harriet was not clever enough to do so. This event foreshadows to the observant reader that it is Emma that will receive Mr. Elton’s professions of love, not Harriet. Not withstanding her entire lack of love for Mr. Elton, Emma has no intention to marry him because it would be a social step down for her. The flirtatious word games used by women in the novel were always used for the purpose of marrying “up.”

Clever word play was a way for women to reveal or conceal their feelings within the confines of social politeness, allowing them to hide secrets or diminish others. Jane Fairfax hid her relationship with Frank Churchill (read also Frank Churchill Emma essay) by making up vague, dismissive answers to Emma’s inquires. When asked if Frank was handsome, Jane replied, “He was reckoned a very fine young man;” when asked whether he was agreeable, she answered, “he was generally thought so.” By wording her answers in ways that were devoid of any personal opinion, Jane was able to politely respond to Emma’s inquires without revealing any of her personal thoughts that might betray her true feelings. Word play could also be used to mock or humble someone.

At an outdoor party among many friends, Emma used her sharp wit to humiliate Ms. Bates. Exasperated by her incessant prattle, Emma responds to Ms. Bates’ confession of saying dull things during a word game that the rules state that “there may be difficulty… [Ms. Bates] will be limited as to the number – only three at once” (Austen, 799). Mr. Knightly becomes angry with Emma for this misuse of her wit because Ms. Bates is poor. He tells her that if Ms. Bates were Emma’s equal in position or status, he would not have chastised her. Sharp words were social weapons for ones equals or ones betters, but not for those of lower class. With so many word games being used for so many reasons, conversationalist in Jane Austen’s time would have been constantly dissecting each other’s words for their true meanings.

In her novel Emma, Jane Austen examines the attribute of cleverness in women, and presents cleverness as a generally positive character trait that could enable women to change their social and economic status. Emma, at the end of the novel, marries Mr. Knightly, a wealthy man of equal or higher social status. Throughout the novel, their close friendship is shown through the verbal sparring they commence with each other. Harriet, unable to use clever words to make herself the wife a gentleman, she instead becomes the wife of a farmer. Jane Austen shows in her novel Emma that though women are limited to how they could advance themselves, through the practice of clever word games and sharpening of wits, they might secure their futures.

An Examination of Clever Words - "Emma" By Jane Austen. (2020, Jun 02). Retrieved from http://studymoose.com/examination-clever-words-new-essay 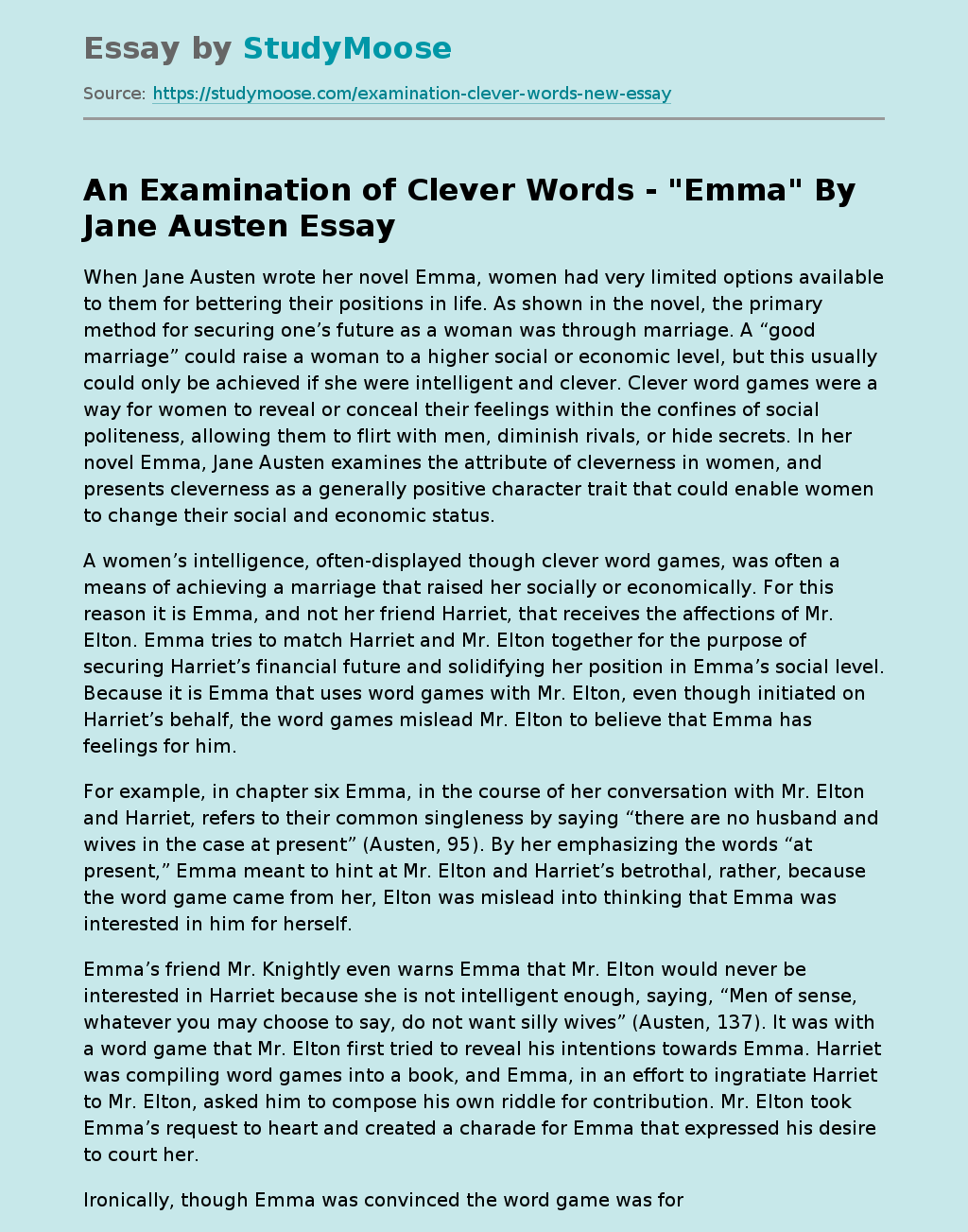