Women in Films User or Victim?

Designed to prove that a woman can be anybody she desires to be, the legendary film, Evita, is now shown to millions of movie viewers. Alan Parker’s Evita is a reflection of the much-publicized images of two popular self-made heroines of different era, Evita and Madonna. The discussion of this essay will show us how these ladies got far and revered once by their followers. The life of Evita Peron is almost like a dramatization of a romantic fiction, about the tale of a young and poor illegitimate girl, who escapes the cruelty and poverty of her hometown, and Aflees to the big city to become a movie star, fights her way to the top through succession of men, marries her country’s president, only to die at a young age of 33″ (Harbinson 154).

Don't use plagiarized sources. Get your custom essay on
“ Evita Peron’s and Madonna’s Successes ”
Get custom paper
NEW! smart matching with writer

Eva was born illegitimate in a small remote town of Argentina, and spent most of her childhood life under a cloud of illegitimacy.

Besides being poor, Eva and her sisters were regarded as bastard children , and for this reason, they were Alooked upon as brats’ and often prevented from associating with the other children of thevillage. This sense of rejection and the ridicules that young Eva and her family received from the other villagers, formed the basis of her hatred of Argentinas middle and upper classes (19).

Eva grew up to be an intelligent, beautiful, and glamorous teen-ager, who attracted many men’s attention. Aside from her good looks, Eva had the charm that could get her all the things she wanted, the character of a woman who never gave into negative circumstances, and a determination so strong, she found her way to the balcony of the presidential palace of Argentina.

The painful rejection, and the traumatic events of her father’s funeral, when she and her family were refused entry by his legal wife, were still in Eva’s mind when she left her hometown for the big city to seek a better life. Despite her blighted childhood and early personal loss, A Evita never let herself be a victim, and instead, used her deprivations as a motivating machine. She developed a strong courage, a ruthless ambition, and a hunger for success and power (185-186).

Armed with all the good looks, strong character, determination to succeed, and, the secret resentment she nurtured against the ruling classes of Argentina who looked down on her family, Evita was ready to change her life. Upon arrival in Buenos Aires, Evita found out that rich and poor people do exist in the big cities. But this sight did not discourage Eva, and she went on to become a film and radio performer. Although Evita had the glamour and talent to become successful, she was also aware of the Acrushing limitations imposed upon Argentinean women of relentless male chauvinism. It was the men who had the freedom and earned the money to use it(25). But Evita was determined not to be a victim, she instead, use men as a stepping stone to her success as she did to Augustine Magaldi to escape out of her hometown. In the film, Evita, Alan Parker portrays Madonna as if it was meant for her to be born to portray the role. Significantly indeed, Madonna’s life is almost a replica of Evita’s life: a rags- to-riches tale in which Aearly personal loss is a motivating factor, and in which, once success is achieved, ruthless will is deployed to sustain it (163). M

adonna’a childhood background resembles Evita’s in many ways. Both came from a working-class background, both lost a parent at an early age (Evita’s father and Madonna’s mother), and both ladies were impoverished as little girls. Evita’s fight for success made her a role model to Madonna, admiring the way she overcame her loss in early life. Despite all hurdles, Evita used her early tragic experience as a motivating factor to seek what life has denied her. Madonna, on the other hand, also used her own childhood loss and fears as springboards to personal freedom. Like Evita, Madonna left her hometown to seek a better life. Similarly, Madonna too, was obliged to used men to get what she wanted (185). According to a review by Ken Mandelbaum, Madonna does not only have the perfect look for the role of Evita stunning, tough, enigmatic but the persona has much in common with that of the woman she is playing. Both ladies got far on glamour, detemination, controversy, the ability to influence styles and play a crowd, and somewhat limited skills. In addition, he stated that Madonna is a legend-in-her-time playing another one (26).

As the film opens with the contrasting funerals of Eva’s father and her own, we are introduced to Che (Antonio Banderas), the floating narrator who represents all the feelings held against Eva as politician and woman. He then takes us through a journey. First, a young and ambitious Eva, seeking riches and fame. Eva is fifteen years old when she met a nightclub singer, Augustine Magaldi, and begs him to take her to Buenos Aires. Although Eva finds out that the big city of her dreams is not exactly what she dreamed about, she carves out a career as a radio and film actress, becomes popular, and Aslowly bounces up the social ladder with the help of her escorts (Parker 38).

She then meets the poltical bravado Juan Peron (Jonathan Pryce), whom she instantly charms, and leaves the concert with him. Eva eventually moves into Peron’s residence and shows the door to Peron’s mistress. Consequently, Eva becomes Peron’s strongest ally despite numerous criticisms by the military and the Oligarchy (ruling classes) who Aview her as a whore (Harbinson 157). Then the journey takes us to a confident and adored Eva. Now, with a dignity to her face, Eva looks stunning and beautiful standing next to her husband and the newly -elected President, Juan Peron.

The scene at the balcony of Casa Rosada is not a very pleasant view for the Oligarchs who considers Eva as a ruthless woman. Although the privileged Argentineans and the ruling classes fear her (on the grounds of vengeance); the masses of people, majority of whom are underprivileged working class, worshipped Eva, now known as Evita. Evita is finally on top of the world. Her followers revere her, as she has finally defeated the Oligarchy, she uplifted the living standards of the working classes and Evita has given the Argentinean women the A right to vote, set up homes for unmarried working girls, and stimulated the idea of women in careers – all these in a country where women had never had a role before (106).

And the last journey, a stricken Evita. According to Alan Parker, for eleven eleven months, Argentina witnessed Eva’s slow and public dying. Eva fell into a steep and sudden decline, and on July 26, 1952, she died of cancer at the age of 33 (13). Evita, once a poor girl, became Argentina’s most beloved heroine, and the most hated enemy to the ruling Oligarchs. Accused of being a whore and a ruthless adventuress, by the well-to-do, Evita is considered a saint by her followers. She became the saviour of the underprivileged Argentineans, and above all, she changed the cultural stereotype of women in Argentina. Ruthless or not, her memory will always remain to the suppressed of Argentina.

Whether these two ladies, Evita and Madonna, used men to get to the top or not, it is a tribute to their iron will, to their already highly developed sense of survival, to their strong fighting spirit, and to their determination to succeed, that they became what they wanted to be. Evita and Madonna may not exactly be the role models some mothers would want their daughters to follow, but many women would love to have the strong characters they possessed which made them heroines. 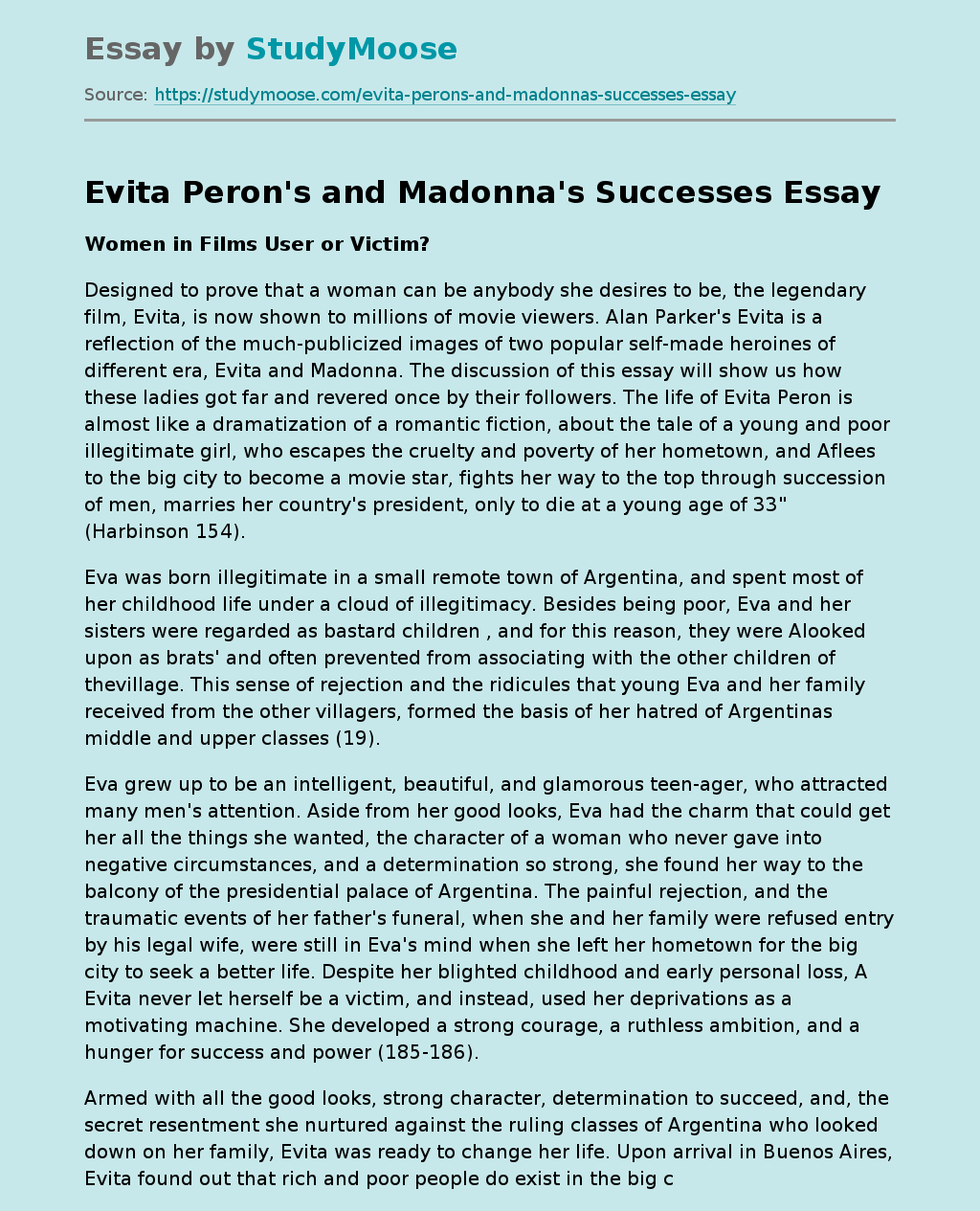