Jimmy Santiago Baca is an American author who wrote a memoir called “A Place to Stand: The Making of a Poet”. In this memoir, Baca addresses the many challenging adversities he had to face while growing up. In this chapter, Baca uses a notion of being unaccepted, violent scenes, and clear imagery displaying human nature in his narrative to distinctly portray the impact of being abandoned and how it affected his life drastically.

Due to the fact that he was usually alone from the beginning, Baca was not accustomed to being endorsed by others.

Don't use plagiarized sources. Get your custom essay on
“ Evaluation of Jimmy Santiago Baca’s Memoir ”
Get custom paper
NEW! smart matching with writer

Baca states, “I couldn’t talk to the kids because they were so much smarter than I was. They were the kind of kids my mother pointed to, saying I should be like them” (24). Baca already felt out of place because of his illiteracy. More so, his mother’s words made him think he couldn’t amount to much since he and the other kids had an obvious differential standing.

This not only being in looks but wealth-wise and in education. This was very clear to Baca. Further, he adds, “I was invited to parties, over to kids’ houses, swimming, but since I couldn’t go or explain why I couldn’t go, I lied that I had things to do, places to go, and generally gave them the impression that my life was full of activities” (26). Baca felt as if he would be judged by his peers, since he wasn’t anything liked them. The difference between them was unmistakably visible.

Because of this, he assumed that if they knew about his actual lifestyle, they wouldn’t like him. The thought of being shunned haunted him. He indicates how he was ashamed over something he obviously had no control over. As a result of that mentality, he would constantly lie to them. Accordingly, being too frightened to be criticized, he gave a false impression of his life, depicting his sense of being afraid of being alienated by others.

Baca began to use his fists to occasionally express the violent feelings reeling inside of him. He mentions, “I wanted to take his hurt away by hurting others, but it never seemed to work. When I finished a fight and we were alone again, he would explode. To vent his anger, he berated and demeaned me, and then he beat me, and I let him…And somewhere along the line I started fighting just for the sake of fighting, because I was good at it and it felt good to beat other people up” (34). The pain he was experiencing because of his brother’s abuse made him succumb to fighting repeatedly. Baca basically implies that there were times where a reason to fight was not needed. It was his way of conveying his own emotions, hence his constant engagement in fighting. In addition, he affirms, “I’d fight like a pit bull, my violence fueled by the fact that I had nothing to lose” (39). In this quotation, Baca compares himself to a pit bull. In people’s eyes, pit bull fights are deemed to always be aggressive and bloody to the point where someone would either come out dead or unable to move anymore. It makes the reader imagine a scenery of violence itself. Thus, by saying this, a person can easily visualize that when he fought, there was always a bloody mess, portraying the amount of animosity he had inside of him.

To make the reader “see” his story, Baca uses detailed writing of his perception on human nature. He states,” I’d always had a secret longing to have a place in the desert, all alone with the wind and the coyotes, or in the mountains by a stream, the forest beyond my door full of wildlife: birds, deer, elk, mountain lions, wolves” (36). By clearly describing what he would fantasize about, it helps comprehend what he himself would visualize in his mind. But, not only does he get specific about the certain animals but he also describes certain things about the view he’d see as well, making you question why he chose this scenery. Why would he choose where he would be alone when that’s the thing he himself has been trying to avoid? Does Baca imply that a strict surrounding is where he would abide to being alone? He then also states, “When I really needed to feel safe, I’d go to the mountains and hang out with nature. The ponderosa pines and running streams appealed to me…” (36). Whenever he encountered a problem, Baca would resort to “freeing” himself of his adversities by escaping to an actual scenery. This giving the impression that being enveloped with nature was presumably the only time where isolation was comforting to him. Furthermore, as a natural human response to escape one’s problems, Baca’s way of doing so was to emerge into a calmer atmosphere.

Altogether, Baca’s choice of words in this chapter is combined with vivid details of his many experiences. This being to not seem bland or dull. He explains his life in this book with complex vocabulary to show how his life changed. This being from at first being and illiterate twenty-one-year-old to being able to write his own books. Baca’s constant misfortunes made him into the person he is today. Finally, he effectively writes about his feelings of being an outcast, how he negatively used violence to express himself and his way of transcending into a new place to feel at peace in this specific chapter to show a mixture of the many tragic event he went through. 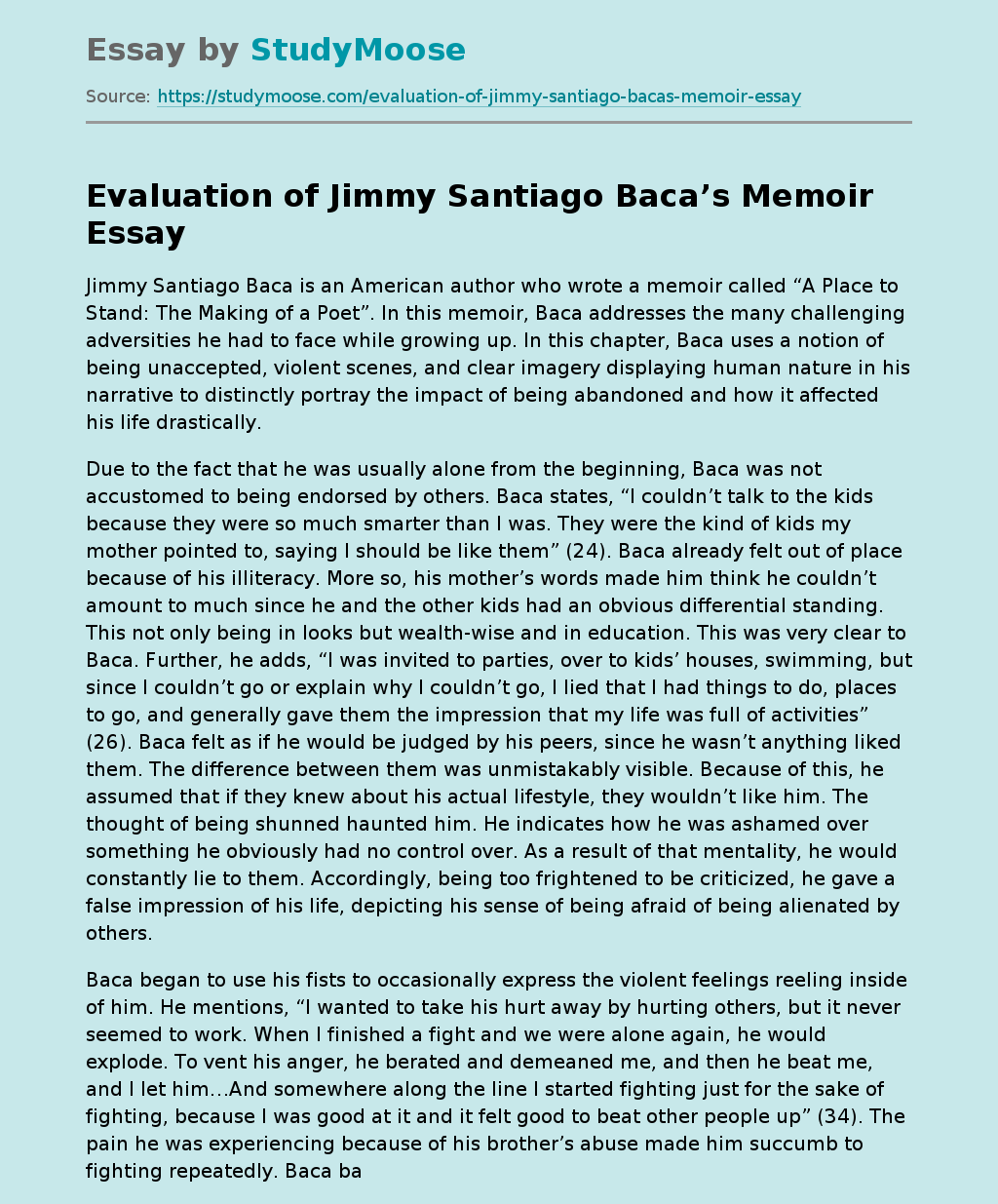