Europeans and Guns, Germs and Steel

The video series Guns, Germs and Steel explores the reasons behind why Europeans have so long been able to dominate most of the world, starting back when only a few hundred men on horses hopped off their boats in the new world and proceeded to (quickly) practically wipe out the entire native population. Jared Diamond, an professor, biologist, anthropologist and passionate bird lover himself, says the answer is “guns, germs and steel,” and a few other things too. Guns being weapons, germs meaning that those without immunity to their germs would suffer from terrible disease epidemics.

Don't use plagiarized sources. Get your custom essay on
“ Europeans and Guns, Germs and Steel ”
Get custom paper
NEW! smart matching with writer

Steel refers to technology, advanced of course compared to the native peoples. This combo of military power, disease and technology continues throughout history to be the European “strategy” to keep being the big dog of the world.

Diamond’s “lightbulb” moment of realization about global inequality is reenacted with him on a boat floating somewhere in Papua New Guinea (photographing beloved birds of course). A native person asks him (cue bad English here) “Why you white man have so much cargo and we New Guineans have so little?” New Guinea has been populated for 40,000 years which is longer that South and north America have and it has diverse cultures but the people there are way poorer then Americans today are.

Proficient in: Guns Germs And Steel

I found it pretty ironic that the theme of this series is white people having more power, money, land then native people and that they got it by using weapons, germs and technology, and this white biologist got his “idea” for Guns, Germs and Steel (this was a huge bestselling book I believe before PBS made a video version) from a poor brown native person.

It is the best example of global inequality Jared Diamond could have used but it is not apparently one he wants to think or discuss about. I write this with laughter, but my head shakes as I think “typical.” A white guy has to spell it out to white people just why they have so much more than native people who by all means and considerations should have the same if not more than said white person.

Enough about inequality though, Diamond himself makes sure to state any theory that race indicates superiority, genetically or not, is “absurd.” Having a mother-in-law who is a California Native American Native American professor obsessed with the Spanish missions genocide of the California Indians and the after effects in today’s generation of surviving native people’s tends to make me a cynic when discussing white haves vs. native have nots. All cynicism aside, Jared Diamond is actually a really interesting person and I do not think his motives are anything but pure, anthropological interest. He is attempting to go back as far as possible in human history, back before there was any global inequality, and discover what exactly is the reason why it was the white Europeans who were designated all this “power,” all of the advantages necessary to let them be the conquerors and not the conquered and why the native people (of New Guinea for example, every bit as capable, probably more adaptive and diverse too) were not the conquerors.

I thought it was pretty amazing that what Diamond discovers is that basically pure luck is the reason why the Europeans ended up always ahead of everyone else. Pure luck that where they lived was one of the only places on earth with plant species you could domesticate AND animals able to domesticate too, not to mention the very land “Eurasia” or the “fertile crescent.” By being able to domesticate plants like wheat, barley and rice and 12 of the 14 domesticated animals in the world living within their region, they had everything needed to develop successful farms and then the stability needed to keep developing their more advanced and specialized skills. Diamond even is able to say that global inequality began 12,000 years ago in the “fertile crescent. “ This was when the Europeans began to be ahead of other groups. I’m looking forward to seeing the rest of these videos, I had never seen them before or read the book but have heard of Jared Diamond and this book and this is a really interesting topic to think about.

Europeans and Guns, Germs and Steel. (2021, Dec 02). Retrieved from https://studymoose.com/europeans-and-guns-germs-and-steel-essay 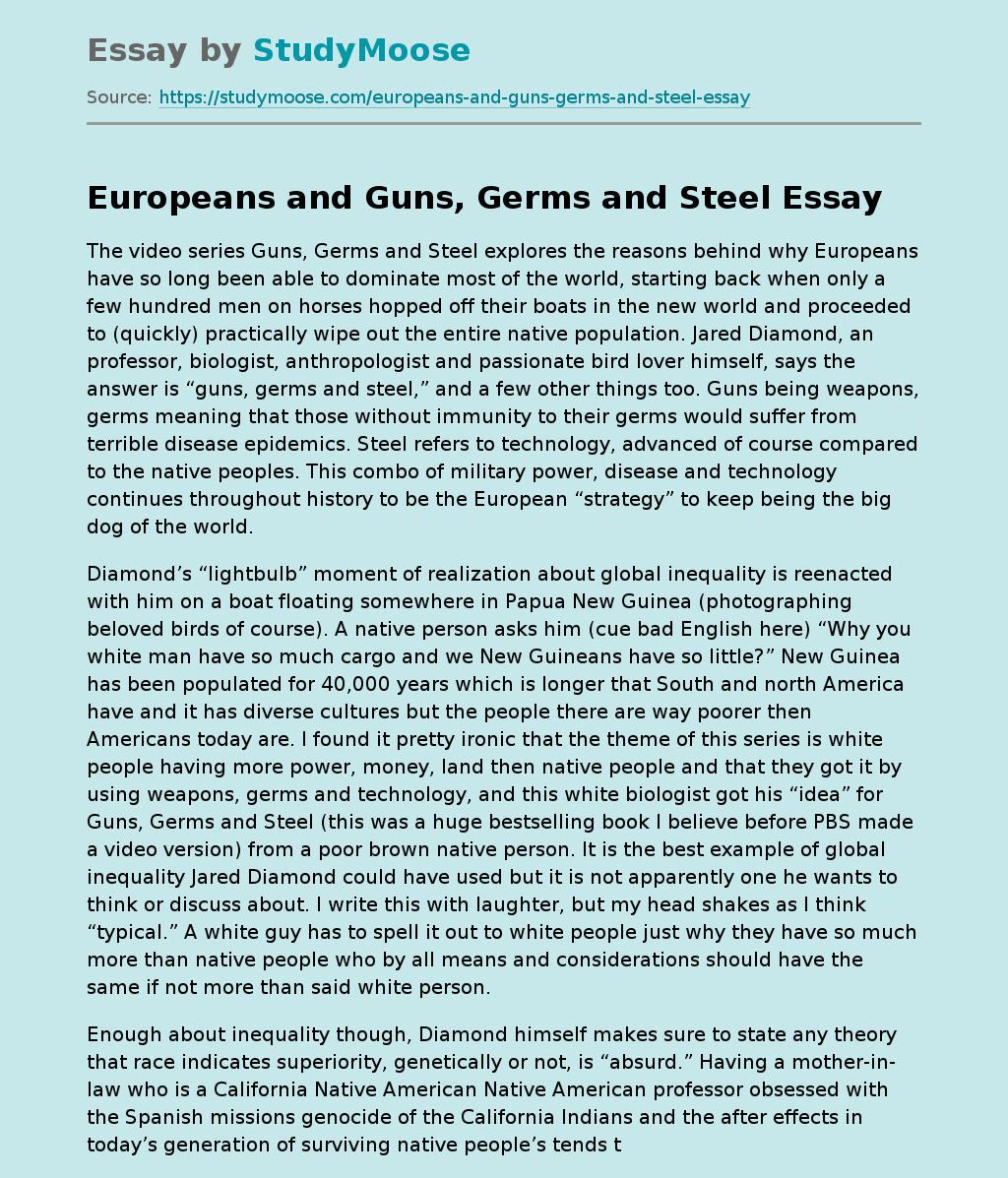