Essays on Guns Germs And Steel 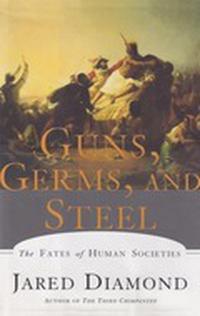 About Guns Germs and Steel Book

Guns, Germs, and Steel: The Fates of Human Societies is a non-fictional book published in 1997. Written by American historian Jared Diamond, a professor of geography at the University of California, Los Angeles (UCLA).

The book compares the enlightenment and advancements of North African and Eurasian communities. Jared argued that Eurasian civilizations developed rapidly and were years ahead and able to conquer other regions because they had an advantage in geography and not because they had superior genes.

Guns, Germs, and Steel won a Pulitzer Prize for general nonfiction in 1998. National Geographic Society produced a documentary in 2005 based on the book. It also won the Rhône-Poulenc Prize of the Royal Society’s Science Books and the Phi Beta Kappa Award in Science in 1997.

The book opens with the author’s conversation with a veteran of the armed forces and a seasoned politician named Yali. Yali is a citizen of the Independent State of Papua New Guinea, a region dominated by Europeans for over 200 years.

Yali asked Jared, the book’s author, a question – “Why is it that you white people developed so much cargo, but we black people had little cargo of our own?” The term cargo loosely referred to produced goods and technological advancements.

Using the next 400 pages, the author attempts to explain geography’s influence on the production of ‘cargo.’ He analyzed European countries’ geographical advantage in agriculture and rapid adaptation of inventions compared to other regions.

The book explained how better agricultural practices led to a surge in the population and how European communities were better suited to combat infectious diseases that wiped out millions of North and South American natives simply because of their different locations and demography.

Guns, Germs, and Steel is not a fictional piece, and the characters in the book are real people who had a real impact on their respective cultures when they were alive. Some of the main characters include:

Yali: A politician from Papua New Guinea. His sincere question led to the award-winning answer.

Levi: An indigenous American from the Blackfoot tribe. He was instrumental in the author’s research and understanding of the Native American environment.

Christopher Columbus: An explorer from Italy who led several expeditions to Africa and North and South America. He performed these voyages in the 15th century and was funded by the Spanish royal houses.

Jean-Jacques Rousseau: A French philosopher who maintained that humans are born in a perfect environment and are somewhat corrupted by civilization.

Johannes Gutenberg: A German inventor credited with developing the modern printing press. Born in the 15th Century, He was a blacksmith and a printer.

Below are some popular quotes from Guns, Germs, and steel:

To write a good essay, you must start with a compelling introduction. Your introduction will determine if your paper will be an easy read. In this section, you mustn’t beat around the bush. Let your argument, thesis, and point of view be in the introduction.

Your introduction should hook the reader’s mind and keep them on the essay. You can start with a question or a popular quote from Guns, Germs, and Steel. You can then go on to state the thesis behind your essay. Your thesis must be simple, short, and detailed. Also, connect the summary of your book with your thesis statement.

The body is important because it accurately explains your thoughts and facts. This is where the key objective of your essay comes to bear.

In the body paragraph, explain the examples you have chosen to illustrate your point of view. For example, the body of an essay on Guns, Germs, and Steel should explain the text’s main idea– the influence of geography on cultural, political, religious, and economic differences between the countries of the world.

The body of your text should answer why the Europeans seem to be on top of the world and Australia, Africa, and North and South American continents seemingly remain beneath. Remember, this is where you take a stance and expertly defend your stance.

Students often treat conclusions as the summary of their essays and pay less attention to them. However, the conclusion is your last chance to assert your viewpoint.

Clues to Consider While Writing an Essay About Guns Germs, and Steel

Before you write an essay about Guns Germs, and Steel, you must read the book thoroughly. Guns Germs and Steel is nonfiction about the world’s problems, especially the third world.

Jared emphasizes that knowledge is as important as the air we breathe. Reading this book will reveal several answers to questions in your thesis statement and could also bring new questions that would strengthen your position.

Most importantly, the purpose of reading the book well is to know what the writer posits and what he didn’t agree with, thus, aiding your comprehension of the text.

When you have carefully read the book, you can’t but have questions regarding the essay. When you have bundles of questions about the text, it will lead you to a compelling topic.

Look into the issues discussed in the book and how the writer tried to address the issue. When you know the answer to any of the above questions, you are a step away from getting a compelling topic.

An outline allows you to organize your thoughts and put them in the right perspective. It helps you to prioritize your points in order of importance. Which argument should come first, which should come next?

You can hardly write a well-structured essay without an outline. A good essay is divided into three paragraphs; the introduction, body, and conclusion. When drafting your outline, you should consider the author’s background to understand the point of view he is writing from.

Before you begin your outline, you must draft a strong thesis statement. This is crucial in backing up your argument. To do this, you would need a proper understanding of the themes in the book.

While the text talks about the rate of development across different cultures, your thesis might go beyond this. You can also dive into food, lifestyle, animal domestication, and weaponry in the text.

Include an Ethical Lesson

No text is written in isolation. Each text has a moral or lesson for readers. The central theme of your essay should contain your viewpoint. This will play a role in giving you the moral of the text.

However, in nonfiction such as Guns, Germs, and Steel, the moral can be the knowledge the author is trying to pass across, which is numerous in this case. Therefore, you should choose one major inspiration you have acquired in the text and make it a resounding point in the mind of your readers.

Lastly, when you write any essay, you shouldn’t assume that you have written good work without revising it. You need to improve and edit your essay by reading through it carefully.

When you do, you will reorganize your thoughts, review your presentation of facts and correct any punctuation or spelling errors. If necessary, you can also use this opportunity to amend your arguments to a more refined one.

Writing a great text is not accidental; you need to put in the work. If you cannot write a great essay, for whatever reason, we have a team of professional writers who can give you a top-notch essay on Guns Germs, and steel.

What is the Guns, Germs, and Steel theory?

The author’s main argument is that European communities developed far more rapidly than other regions because of geographical luck and not biology. The rapid development in agriculture allowed such a society to win the race on Guns, Germs, and Steel.

What is the major conclusion of Guns, Germs, and Steel?

The book concluded that the colonization of other continents by Eurasian people was not because they had superior genes or a hidden mystery. The book postulated that European communities developed swiftly from everyone else because of their geographical advantage.

What is Guns, Germs, and Steel about?

Guns, Germs, and Steel considered what made it possible for Europe to conquer and rule over native North and South Americans, Africans, and Australians. The book deeply delved into each continent’s history, establishing how they fared in agriculture, population growth, health, and weaponry in their physical environment.

Who wrote Guns, Germs, and Steel?

It was written by Jared Diamond, a professor of Geography and Physiology at UCLA. According to Prospect and Foreign Policy, diamond is a Pulitzer Prize winner and placed ninth on the world’s top 100 public intellectuals poll. He is a recipient of several scholarly awards.

Save Time On Research and Writing
Hire a Pro to Write You a 100% Plagiarism-Free Paper.
Get My Paper
We've found 5 essay samples about Guns Germs And Steel
Prev
1 of 1
Next
Similar genre
Young Adult FictionPoetryAllegoryComedyGreek MythologyMemoirFictionBiographyHistorical NovelWorld War I
Get to Know The Price Estimate For Your Paper
Topic
Number of pages
Email Invalid email