Baby Theresa is a very unique case. Theresa Ann Campo Pearson was an infant born in Florida 1992, with Anencephaly, which is where the two most important parts of the brain are missing, the cerebrum and cerebellum, as well as the top of the skull. Without these parts of the brain she would never have had higher brain functions or consciousness. However, there is still a brain stem connected so all the autonomic functions are still working, such as having a heart beat and breathing.

Don't use plagiarized sources. Get your custom essay on
“ Ethical Analysis of Baby Theresa ”
Get custom paper
NEW! smart matching with writer

Anencephaly is known as one of the worst congenital disorders, thus these cases are usually detected during pregnancy and aborted.

If not aborted, half are stillborn or if born alive, they usually die within a few days. In Baby Theresa’s case, she died nine days after birth. Even though, knowing that Baby Theresa would not live long and never have a conscious life, her parents requested that her organs would not go to waste, but instead be donated for transplants for other infants in need before Theresa’s natural death.

In fact, even physicians agreed that was a good idea because over 2000 infants need transplants each year.

Unfortunately, the state of Florida prohibits euthanasia and that the organs only be removed when natural death occurs. Eventually, within the nine days Baby Theresa organs decayed and were not used because the Circuit Court Judge Estella Moriarty ruled that a Florida statute does not allow a person to be declared dead while any part of the brain is functioning.

The judge told the parents: “I can’t authorize someone to take your baby’s life, however short, however unsatisfying, to save another child. ” Which brings me to my first ethical argument, “It’s wrong to kill”.

According to Immanuel Kant and his Kantian deontological theory, the principle of morality and our perfect duties, which one happens to be “it’s wrong to kill an innocent person”, comes from the categorical imperative. Kant states in the text on page 18 that, “act in such a way that you always treat humanity, whether in your own person or in the person of any other, never simply as a means, but always at the same time as an end. ” This is basically saying you always respect another person’s dignity.

Thus, from a Kantian standpoint, it is wrong to kill Theresa and take her organs to save others because then they would be using her merely as a means to other infants’ ends. However, to play devils advocate, “using a person” typically means you are violating their autonomy- their right to live and decide for themselves according to their own desires and values. With that being said, Baby Theresa was not autonomous because she had no consciousness, she had no ability to ever decide what was in her best interest and desire. So, technically, the Judge of the circuit court was not respecting the parents’ dignity of wanting to donate Theresa’s organs.

For that reason, D. W Ross’s theory should have been taken into consideration. Indeed, I understand why the judge decided to make the ruling she did because if she did allow the physicians to take Theresa’s life before natural death took its course, it would have possibly undermined all physicians as untrustworthy, which could have ruined the patient-physician relationship. However, even though her ruling was very understandable, an important and very valuable theory should not have been over looked with a case as exceptional as this one, the Prima Facie Duty.

W. D Ross explains when to consider this theory on page 23 that, “ to provide a defensible account of “cases of conscience,” that is, situations that confront us with a conflict of duties. ” Meaning when a person is uncertain and unsettled, but still must make a decision, but yet does not know which direction to go, you make a Prima Facie Duty. Ross then went on to explain that, “a Prima Facie Duty can be overridden by another Prima Facie Duty that in a particular set of circumstances is more stringent.

With that being said, the duty of justice and the duty of beneficence can both be applied here because the Judge should have respected the parents’ religion and wishes, in their time of distress, to make their own personal decisions with their daughter by making other beings in the world conditions better. Also, the “it’s wrong to kill an innocent person” argument can be debated as well. Yes, I agree, it is wrong to kill a person to save another person, but there are exceptions, like what even makes a person, a person? Should Baby Theresa be considered a person?

Research shows that all people have minds and all minds are capable of conscious mental activity, which Baby Theresa did not any thoughts or feelings, she was basically just breathing, so she should not have been considered as a person by these terms. Indeed, many infants could have benefitted from Baby Theresa’s organs, leading me to believe that the Utilitarianism theory was the correct approach to take for this case. In fact, when Jeremy Bentham created the Utilitarianism theory, he also made a point to focus on the consequences as much as the positive outcomes, which was called the Hedonistic Calculus.

The Hedonistic Calculus is like a compare and contrast graph to weigh out the pleasures and pains of a situation because his main principle was, “act to promote the greatest amount of happiness for the greatest amount of people and less suffering to the less amount of people” and pleasure is the only value in the world based on the hedonism. With this in mind, if the parents were happy with making other families happy by giving their child organs for a good cause without technically harming or killing Baby Theresa, they ought to do so and that is what Ethics is all about, what you ought to do in a dilemma.

Where as, on the other hand, by not allowing the organs to be donated for transplants, not only was the Judge dissatisfying Theresa parents wishes, she was possibly causing a larger chain reaction of disappointment and agony to the other families who would have been grateful and appreciative of Theresa organs, rather than allowing them to decay, causing pain to multiple parties.

Ultimately, this case is a tricky one because I fully understand both the Kantian Theory plus the Utilitarianism and Consequentialist theory, but I see absolutely no benefits from overriding the parents’ beliefs and wishes of wanting to donate Theresa’s kidneys, liver, heart, lungs, and eyes because overall, many children could have tremendously benefitted from them. 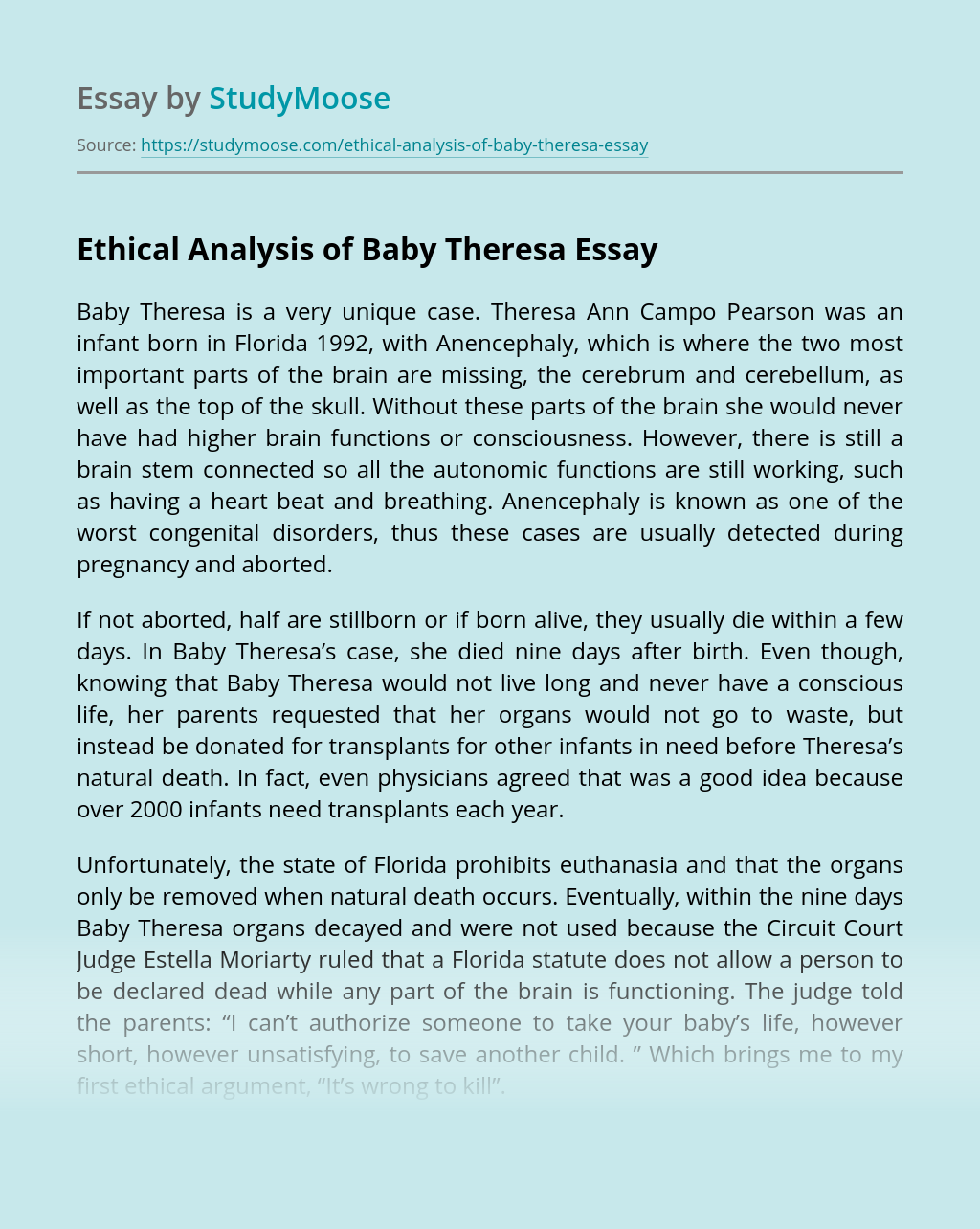