?Essay on the Freedom of the Press

The Press, as identified with Newspapers, wields immense power in a democratic society. Dickens has called the Press “the mighty engine”. So great is its influence that some have called it the Fourth Estate. Napoleon used to say— “Your hostile newspapers are more to be feared than a thousand bayonets.” For, the press forms opinions, shapes movements and controls policies through well-informed criti­cism. The most powerful autocrat is forced to take note of public opinion as reflected in a free press.

Don't use plagiarized sources.
Get Your Custom Essay on ?Essay on the Freedom of the Press Just from $13,9/Page

That is why a regimented press is the instrument of autocracy, and a dictator deprives the press of its freedom. A free press is the symbol of a free people. An independent, well-informed press is a powerful check on arbitrary governments and irresponsible administrators. For newspapers are agents of the public, which bring to the notice of the people acts of injustice or oppression, or mal-administration that would otherwise have remained hidden away from public knowledge. They augur misgovernment at a distance and sniff the approach of tyranny in every tainted breeze’ (Burke).

They exercise a constant vigilance on the rulers, which is salutary for all.

Nowadays it is difficult for the press to be free. Either a newspaper is controlled by some financial magnates entirely and it has to voice their views or it is the mouthpiece of a party, and it must think as the party might direct; or it is under the thumb of the government and in that case its usefulness is reduced and independence compromised. For whoever controls it, necessarily limits its freedom by his own interests, i.e. calls the tune. In America, the great newspapers are in the bands of powerful financial syndicates; in England, they are in the hands of capitalists; in Russia they are mostly controlled by the government. But freedom of the press in each case depends on the way it reflects the will, the purpose of the people as a whole, in preference to that of any class or community or individual. The illusory or unrealistic character of the freedom of the press was seen during Great War. It is in such times of crisis that the voice of the people should be most clearly heard and not muffled. Yet it is then that newspapers are completely gagged. Most of these abuses might be checked to the advantage of all concerned, if the newspapers have freedom to criticise authorities and ventilate grievances. Indeed, no government can stifle the voice of the people but at its own peril. The problem, therefore, is—how to ensure freedom of the newspaper.

Legislation, of course, should guarantee the press against interference by the government; this goes without saying- But something more is necessary. The press under no circumstances should be forced to disclose the source of information or will be subservient to the government. But enjoins enjoys a corresponding duty on the part of the Press—that it should maintain strictly honest journalism and should not give any garbled report or prejudicial account. Independent-minded editors should have the right to ft free expression of opinions and unhampered publication of news, subject only to the limitation that they do not publish abuse and keep within the bounds of decorum. But real freedom of the press can exist only where a free people can function freely as in true democracy. It may be asked, why do we say there is no freedom of the press in England or America or India. The reason is that in these countries, the common people are in economic bondage. Governments are ruled by the power of money and the press is controlled by owners in the interests of Big Business. In is, therefore, rightly claimed that in a Socialist country as the people become economically free, the government acquires an increasingly representative character. The journalists then can write freely and fearlessly. The best way to ensure freedom of the press is to publish all news from accredited sources, to allow free ventilation of opinion, to do away with all controls except in the interest of public safety or welfare.

Freedom of the press should be a valued privilege and has to be safeguarded. It is a sacred right, which should be zealously promoted. Governments owe it to themselves to guarantee it from all arbitrary interference. Editors owe it to the public to maintain an honest and fearless attitude in favour of the people, against party or class interests. And the people owe it to their country to demand and defend such freedom as a priceless heritage.

?Essay on the Freedom of the Press. (2016, Mar 09). Retrieved from https://studymoose.com/essay-on-the-freedom-of-the-press-essay 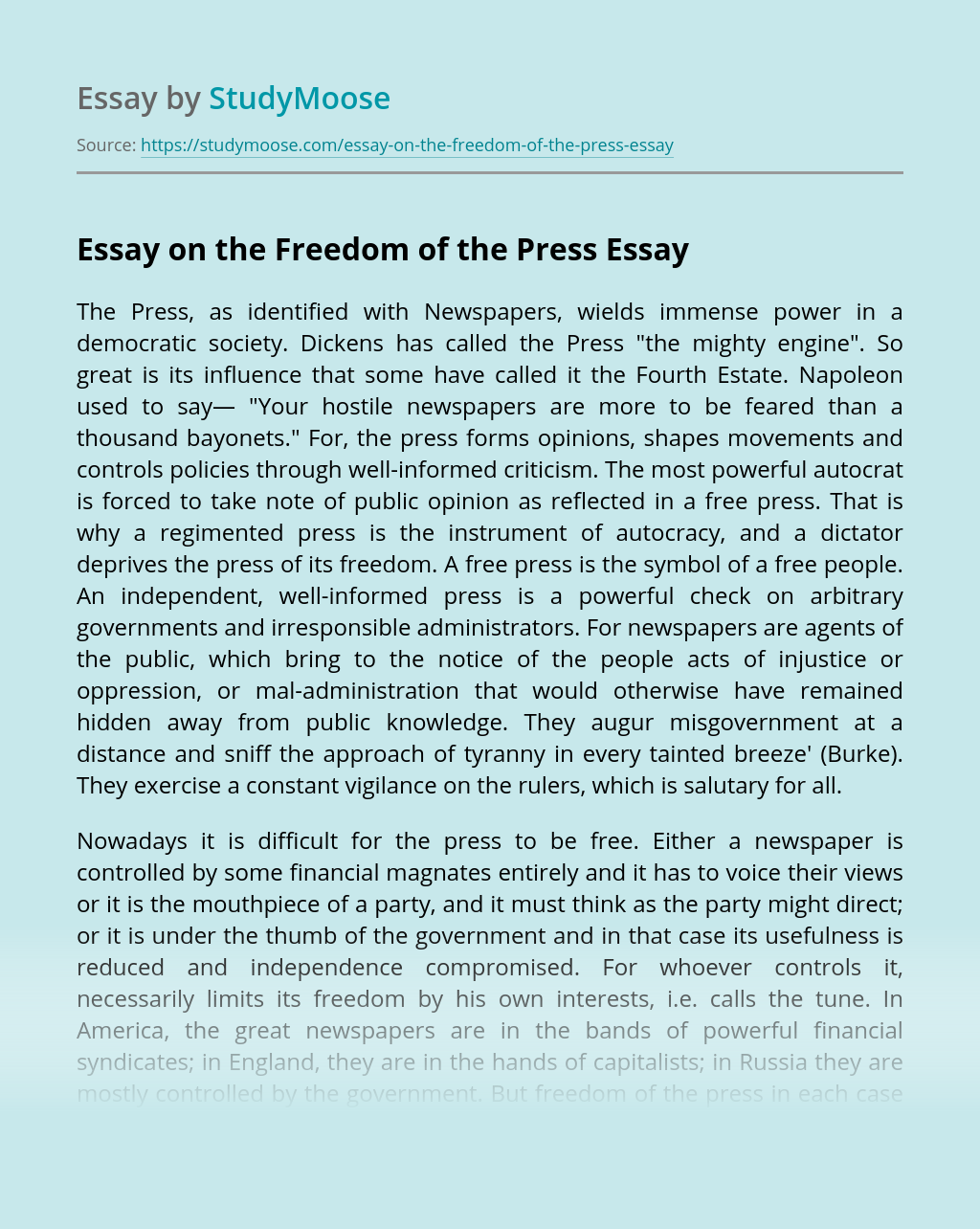 The era of Reconstruction in the 1870s in both the North and South experienced battle for equality for men freed by the 13th Amendment. America was on the brink of recreating the American government, showing genuine signs of a better and brighter future for the African American population. Economic and political practices limited the liberties...

Every American citizen has the right to vote. In the United States, you get to choose the next president and its congressional party. On Guam, you vote for the Governor, the Lieutenant Governor, and the senators. Most young adults do not really know the difference of political parties or care to know the difference between...

Advancement of American democracy from 1865 to date Intro United States is the very first nation to experience liberal democracy. Democracy in this country is thought about to have actually begun in 1788 with the introduction of a democratic constitution. Its democracy is constantly evolving. Here, we shall discuss how the American democracy has progressed...