A power outage which is also called a power cut, a power out, a power blackout, power failure or a blackout is either a short-term or a long-term loss of the electric power to a particular area.There are a lot of causes of power failures in an electricity network. Some of the causes are faults at power stations, damage to electric transmission lines, substations or other parts of the distribution system, a short circuit, cascading failure, fuse or circuit breaker operation.

Don't use plagiarized sources. Get your custom essay on
“ A power outage which is also called a power cut a power ”
Get custom paper
NEW! smart matching with writer

Power failures are predominantly dangerous at sites where the environment and public safety are at risk. Institutions like hospitals, sewage treatment plants, mines will usually have standby power sources such as backup generators, which will automatically power up when electrical power is absent. Other critical systems, such as telecommunication, are also compulsory to have backup power. The arrays of lead”acid batteries are equipped in battery rooms of a telephone exchange for backup and also a socket for connecting a generator during prolonged periods of outage.

Natural causes:About 70% of power outages are weather related. Numerous power failures are caused by weather (natural) phenomena such as storm, lightening, rain, snow, ice, wind, and dust. Although it does not take much to safeguard electrical systems from the effects of water and dust, it is difficult to safeguard from major power failure from natural calamities like floods and severe storms. Water can cause to short circuits and power failure. The damage caused due to water in electrical circuits can be very expensive so it makes sense to ensure that we take measures to well protect from it.

Dampness and moisture can also lead to serious damages. Electrical components like switchboards, wires, and circuits should be prevented from exposure to water. The individuals living in areas with high levels of humidity should consider investing in specially sealed circuit protection devices.Dust can cause havoc with systems with electric circuit and lead to short circuits and power failures. The individuals living in areas that are exposed to dust or sandstorms should pay special attention to the location of their electrical circuits and ensure that they are protected from dust exposure as much as possible. Sealed circuit boxes can also aid in protecting ones critical electrical equipment and can help in preventing unplanned power failures.Natural disasters have been the root of the most severe power outages. Natural calamities like Hurricanes, floods, wind storms, earthquakes, tsunamis, and other severe weather can completely destroy power infrastructure and result in outages that leave large geographic regions without power for days, weeks, and even months.Other causes:The study also indicates that animals coming into contact with power lines, such as large birds, accounted for 11% of outages .Few of the other causes of failures were mostly man made outages that highlight in the form of vehicle, construction accidents with power poles and power lines, conservation from utilities, and the occasional human error.The information on some specific things that contribute to outages, common terminology used to describe various situations, and ideas on things one can do to prevent failures, a number of key areas are outlined in more detail below:Short Circuit:A short circuit is the most common term used to describe the cause of a power failure. Unfortunately people do not have much knowledge of what it actually means. So, let us see what is a short circuit, and how can one protect their equipment from its effectsA short circuit is caused when an electric current travels along a path that is different from the intended one in an electrical circuit. When this happens, there is an extreme electric current which can lead to circuit damage, fire, and explosion. In fact, one of the primary cause of electrical fires throughout the world are short circuits. First and foremost, one must ensure that all their equipment that is used in electrical installation is composed of good quality materials and meets the correct specification for their application. The initial installation costs may be expensive than a system made with cheaper materials but the savings one makes in avoiding potential losses caused by short circuits and maintenance can be substantial, not to mention the additional safety and peace of mind one gets.Wires should always be of the highest quality and of the correct gauge for their application. It should also be kept in mind that wires and other electrical circuits should not be overloaded. Electrical overload leads to overheating, causing the insulation to break down, which in turn can lead to a short circuit. Moving parts of an electric motor like Pumps, pistons, rotors and others should be regularly serviced and checked to ensure that there is no jamming. Overload protection devices like High quality fuses, circuit breakers, and others should be installed so that power can be immediately cut off in the event of a short circuit, thereby preventing damage to sensitive equipment. When using circuit breakers, it is also essential to select circuit breakers of the proper rating. Water is another frequent cause of short circuits. It should be ensured that all visible circuits are kept covered and protected from moisture.In this project we are analysing the dataset to identify the different cause of the power outage and the number of occurrences of the same cause. Along with this other parameter like the season of fault, the time of fault and the date of fault and restoration are observed. Through this analysis we get to know the major cause for the power outage which we can try to prevent by taking necessary steps.1.2 Hidden Markov ModelIn Hidden Markov Model or HMM which is a statistical Markov model the system being modelled is assumed to be a Markov process with unobservable which means hidden states.The hidden Markov model or HMM can be symbolized as the simplest dynamic Bayesian network. The equation behind the HMM were developed by L. E. Baum and co-workers. Hidden Markov Model or HMM is closely allied to earlier work on the optimum nonlinear filtering problem by Ruslan Stratonovich who first described the forward-backward procedure.In simpler Markov models such as Markov chain, the state is directly visible to the observer, and therefore the state transition probabilities are the only parameters, while in the hidden Markov model, the state is not directly visible, but the output which is in the form of data or “token” are dependent on the state, is visible. Over the possible output tokens each state has a probability distribution. As a result, the sequence of tokens generated by an HMM gives some information about the sequence of states. This is also known as pattern theory which is a topic of grammar induction.The adjective hidden does not refer to the parameters of the model but the state sequence through which the model passes. The model is still stated to as a hidden Markov model even if these parameters are known exactly.Hidden Markov models or HMM are particularly branded for their application such as speech, handwriting, gesture recognition, part-of-speech tagging, musical score following, partial discharges and bioinformatics. A hidden Markov model or HMM can be considered a summary of a mixture model where the latent or hidden variables, which control the mixture component to be selected for each observation, are interconnected through a Markov process rather than independent of each other. Recently, hidden Markov models have been generalized to pairwise Markov models and triplet Markov models which allow consideration of the modelling of no stationary data and more complex data structures. In this project we are making use of Multinomial HMM .We are using this model for training and predicting using the dataset available

A power outage which is also called a power cut a power. (2019, Aug 20). Retrieved from https://studymoose.com/a-power-outage-which-is-also-called-a-power-cut-a-power-essay 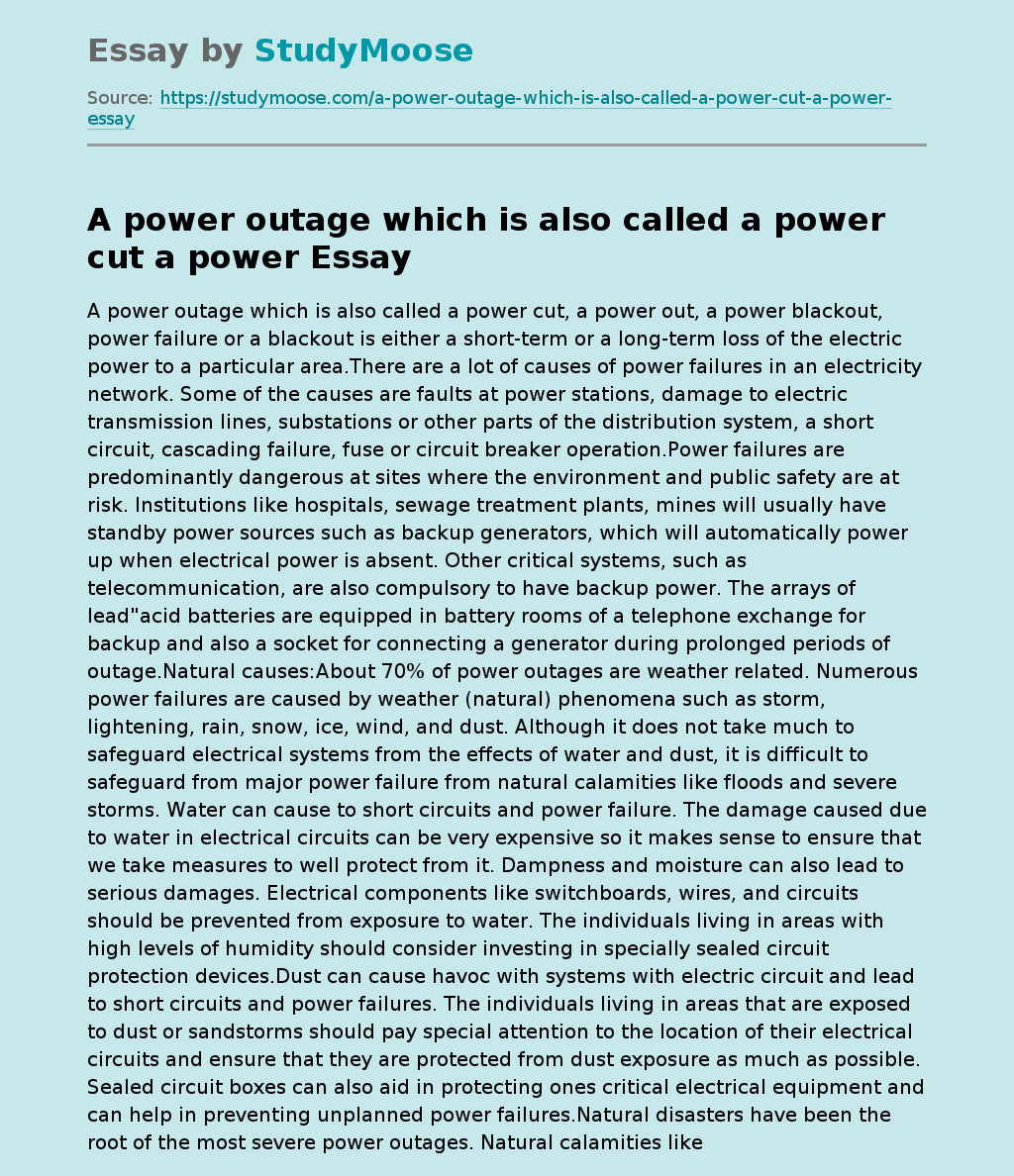