Multinational companies are giant firms with their origin in one country, but their operations extending beyond the boundaries of that nation. For reasons of marketing, financial and technological superiority, these multinationals are generally considered as a sine qua non of the modernisation of an economy.

They have been responsible for the rapid economic liberalisation in India in 1991, the question of the entry of multinational corporations (MNCs) has assumed significance.

Multinationals corporations, mostly from the United States, Japan and other industrialised nations of the world, have en­tered our life in a big way.

Don't use plagiarized sources.
Get Your Custom Essay on Essay on Multinational Companies Just from $13,9/Page

Foreign investment proposals and commercial alliance have been signed on an unprecedented scale, thus giving rise to the controversy whether these multinational corporations are our saviours or saboteurs.

This is so because of the vital difference between the economies of developed and developing nations. This requires that the entry of multinational corporations in India be examined from this angle.

According to A.K. Cairn cross, “It is not possible to buy development so cheaply.

The provision of foreign capital may yield a more adequate infrastructure, but rarely by itself generates rapid development unless there are already large investment opportunities going a begging

That is why the intervention of multinational corporations is imperative in the context of the economic growth and modernisation of developing economies where ample investment avenues lie open and yet due to lack of capital and technical know-how, these potentials remain unexploited.

Multinational corporations help in reorganising the economic infrastructure in collaboration with the domestic sector through financial and technical help.

If we consider the case of our country immediately after Independence, ours
was an agrarian economy with a weak industrial base and low level of savings.

“Though the public sector was supposed to cure these ills, with problems like paucity of funds, lack of technical know-how and other amenities, it seemed an impossible proposition. Hence, the help of multinational corporation was sought in terms of fi­nance and technology.

As a consequence of the public sector multinational corporation nexus, from a miniature one, the Indian industrial economy assumed colossal dimensions and India is considered one of the most industrialised nations of the world today.

However, there is another school of thought, which de­nounces multinationals as an extension of imperialist power and potency source of exploitation of the Least Developed Countries (LDCs) by the developed economies of the world.

According to them, MNCs are an expensive bargain for a developing economy from the foreign exchange point of view. These days when developing countries are struggling with massive foreign debts and their development plans are held up due “to paucity of funds” .this may be considered a serious drawback.

Second, multinationals evade paying taxes in most countries by concealing profits. Government agencies entrusted with the task of collecting the taxes and scrutinising their accounts are often bluffed by them as they do not know enough about the industries they are asked to deal with.

Third, multinationals often provide inappropriate technol­ogy to the developing nations. The technology provided by them is very often too sophisticated to adopt or too absolute by international standards. Further, transfer to technology in accordance with resource endowment of LDCs involves high cost and this may prevent MNCs from transferring appropriate technology to these countries.

Fourth, some of the evils of the multinationals emanate out of their oligopolistic character. Collision is the main determinant of its price policy, which ensures profit at the cost of high level of consumption at a lower price. Even the impact of high productivity brought about by them through the technology-cal advancement is not conducive to the working class because of pre-determined level of profit under oligopolistic criterion.

Fifth, concentration of economic power is the main charge against MNCs.This economic power is often used to distort national politics and international relations by multinationals. These enterprises build up a power entity of their own. They never hesitate in exploiting the social and political weakness and economic backwardness of the LDCs to their own benefit.

A multinational corporation is neither a saviour as its pro­tagonists claim, nor a saboteur as its detractors make it out to be. It is a mix of virtues and vices, boons and banes.

Charges levelled against multinationals are serious, yet it also remains a fact that, despite all these disastrous consequences of their working, multinationals have emerged as the most dominant institutions of the late twentieth century. As such, third world countries in general, and India, in particular, will have to deal with multinationals despite their ugly designs.

The Government must, therefore, have an optimally bal­anced policy towards MNCs after weighting the various pros and cons of the issue.

Once these safeguards are taken, multinational corpora­tions will give an uplift to national economy by bringing in quality goods and services to the country. They will reward enterprise and talent; the inefficient would, of course, have no place in the new scheme of things. Hence, the hue and cry by
interested party, who, dub MNCs as saboteurs.

Multinational corporations will demand efficiency, punctuality and dedication things which are deadly lacking in national life today. They will demand a certain work culture from the employees as well as the employers besides offering the best of goods and services to their clientele.

They should, therefore, be viewed as saviours of national economy rather than saboteurs because we have seen where our previous policies, have landed us right at the bottom of the list of industrialised nations. The economy has steadily picked up since the liberalisation measures were introduced.

This must ‘continue if we are to emerge as a global economic power in the next century. And multinational corporations are the only answer. 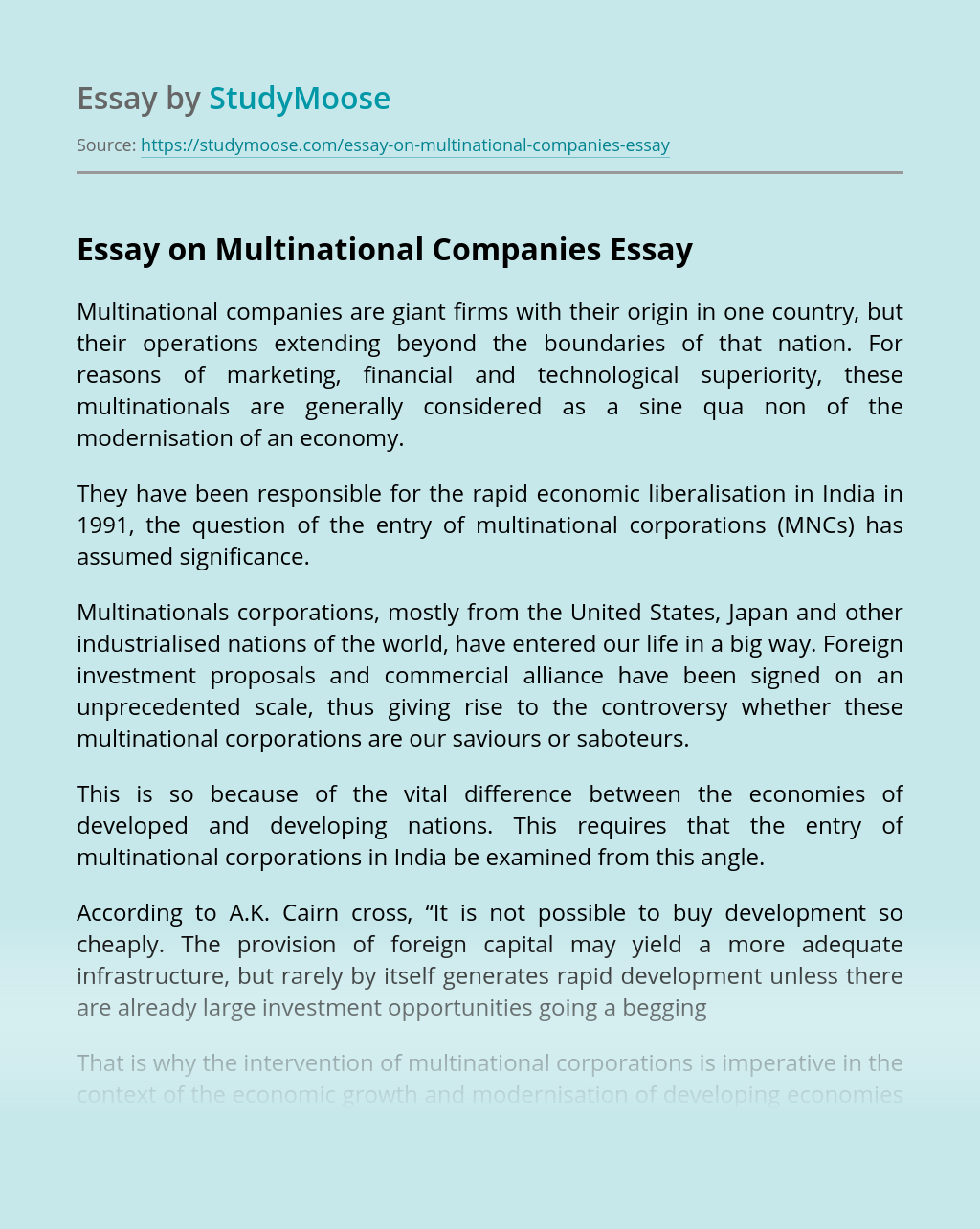 Diversity in Coco-Cola Sachin Mahipathi 1913726 University Canada West Professor: Ashli Komaryk 601 ORGB 17th November 2019 Abstract In this paper, I am going to discuss two new diversity initiatives that were taken by one of the worlds famous company Coco-Cola, what motivated them to do so, and the result of those initiatives, either positive... VIEW ESSAY

“Get thee to a nunnery” double-entendre (Hamlet to Ophelia) “Neither a borrower nor a lender be” and “To thine own self be true” aphorism (Polonius to Laertes) “O God, God/ How weary, stale, flat and unprofitable/ Seem to me the uses of this world!” apostrophe (Hamlet in first soliloquy) “so excellent a king, that was... VIEW ESSAY

Socialism as quoted by Julius Nyerere as “the attitude of the mind” and often defined as a system of social organizations producing and distributing goods that are owned collectively or by a centralized government that often plans and controls the economy. In a socialistic society it is the attitude of mind, and not the rigid... VIEW ESSAY

Frederick Herzberg’s two-factor theory, also called the motivator-hygiene theory. This theory has identifies that there are hygiene factors that can lead to job dissatisfaction but if a hygiene factor is improved it does not improve job satisfaction. Examples of these hygiene factors in the workplace are organizational policies, quality of supervision, working conditions, wage or... VIEW ESSAY