Essay on “Master Harold”…and the boys

Master Harold…and the boys is a play written Athol Fugard in early 1982 depicting apartheid in South Africa. Fugard wrote a number of novels, short story, and plays featuring political upheavals and especially apartheid in South Africa. In the book, he introduced friendship between whites and blacks where Sam, Willie, the blacks and Harry, a white interacts together in close friendship. He contradicted it with how racism could spoil friendship among friends, a factor that contributed to propagation of apartheid.

Don't use plagiarized sources. Get your custom essay on
“ “Master Harold”…and the boys ”
Get custom paper
NEW! smart matching with writer

Racism is the major theme of the play where Harry’s parent shows discrimination against blacks. Her mother discriminated her servants, Sam and Willie telling Harry not to spend most time with them. His father has been found most of the time drinking in whites place. Although, Harry, Willie, and Sam were in good relationship, his racism that has been instilled by his parents is evident and mostly torn them apart. Harry being raised by a racist family and in environment full of racism, he developed racial discrimination character that was evidenced when interacting with his fiends Sam and Willie.

Harry developed discriminatory personality from the fact that he was raised by racist facility. Harry’s mother was depicted as a racist in the play where she employed blacks as servants. They were poorly paid since she believed that they did not deserve good remunerations and good job. She was found refraining her son, Harry from interacting with them because they were black.

These actions resulted to development of racism character in Harry. He sometimes addresses them as the boss despite Sam and Willie being older than him. Willie calls him “Master Harold” and in some instances demand Sam who was like his father to call him the same name. He did this from what he experienced from his parents.

Harry grew up in places where people were segregated in races with designated places for whites and blacks. In the book, the author wrote about different places that were marked for whites and blacks. Blacks were not allowed to interact with whites at certain areassince they were regarded as “whites only’” (Fugard 56). For example, when Sam made a kite for Harry, the author pointed out that he tied it to a seat labeled whites and since blacks not permitted to play there, they left Harry alone. In addition, when Harry’s father got drunks and was stack in white people pub, Harry had to seek permission in order for Sam to enter and pick his father. This was evidence that Harry grew up in a racism environment and thus ended up as a racism.

The effects of growing in a racism environments and with racists family was evident Harry broke an argument with same and spat on him. Harry lived with a drunkard father who was a racist. Since he grew up in this environment, he had developed a negative attitude about black. When Sam informed him about his father’s discharge from the hospital,“Harry spit on him” to release his anger of that fact that he did not want his father home (Fugard 56). He demanded to be called “Master Harold” by Sam because of his ego as white man. Although Sam had reacted on it, he was kept on toes by Willie who reminded him that Sam was just child who did not knew what he was doing. This evidenced that racial discrimination played a great role in creating enmity and violence during the apartheid era in South Africa.

Master Harold…and the boys was a play written by Fugard depicting how racism could be developed by down the family and interaction with the environments. Harry was brought up in a racist family and environments that advocated for racism. His mother refrained him interaction with Sam and Willie for their color backgrounds. Although Sam, Harry, and Willie grew up as friends for a long time despite their age differences, racial discrimination resulted in violence that was evidenced when Harry spat to Sam to relieve his anger of living with his father. This was a sign that Harry had developed racism from the environment he grew in. Hence, Fugard used literary work to address evils in the society, which can be explained by enactment of a number of legislation on apartheid after the play was published. 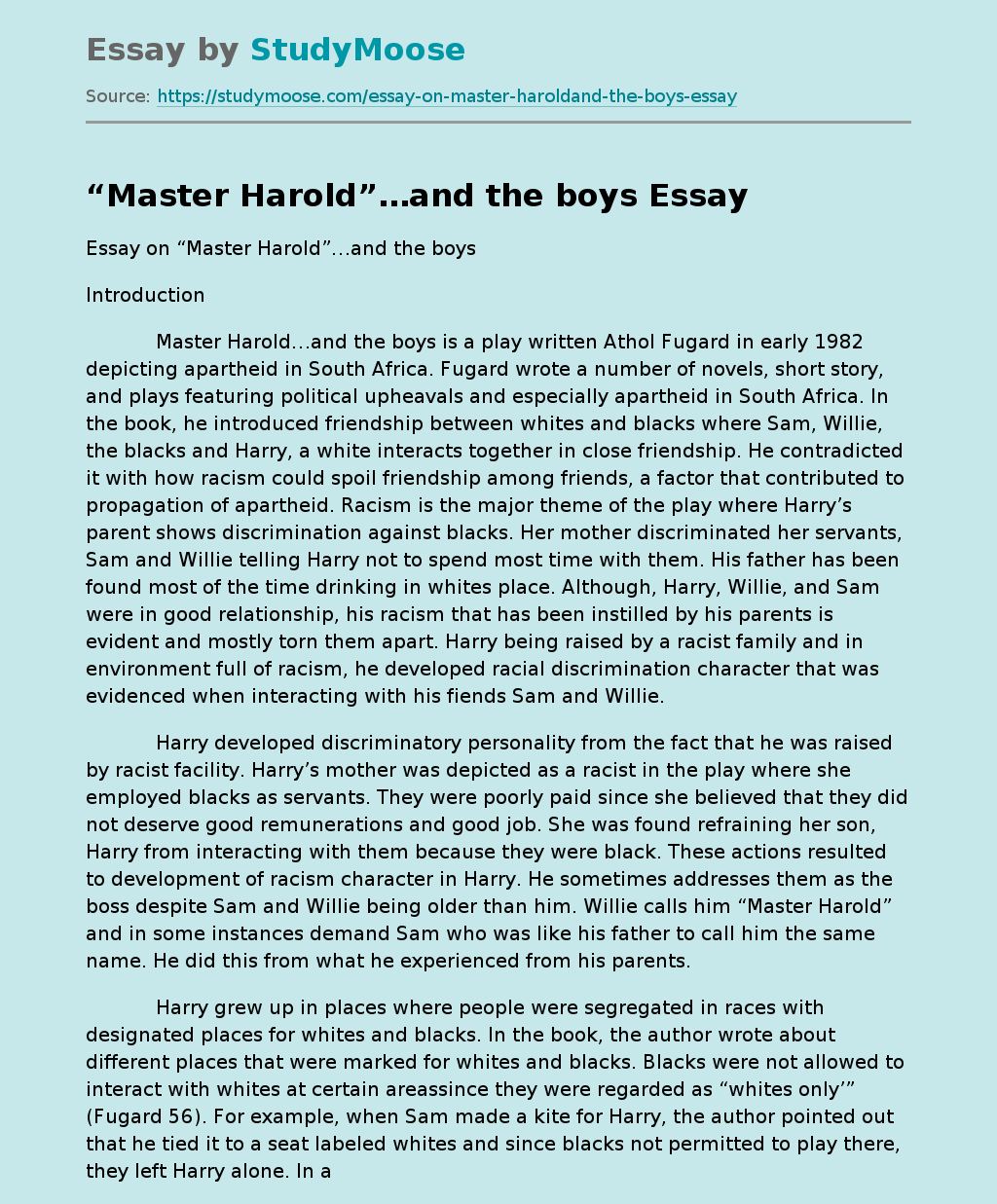