Shipman’s trial, presided over by Mr Justice Forbes, began on 5 October 1999. Shipman was charged with the murders of Marie West, Irene Turner, Lizzie Adams, Jean Lilley, Ivy Lomas, Muriel Grimshaw, Marie Quinn, Kathleen Wagstaff, Bianka Pomfret, Norah Nuttall, Pamela Hillier, Maureen Ward, Winifred Mellor, Joan Melia and Kathleen Grundy, all of whom had died between 1995 and 1998. On 31 January 2000, after six days of deliberation, the jury found Shipman guilty of killing 15 patients by lethal injections of diamorphine, and forging the will of Kathleen Grundy.

The trial judge sentenced him to 15 consecutive life sentences and recommended that he never be released. Shipman also received four years for forging the will. Two years later, Home Secretary David Blunkett confirmed the judge’s whole life tariff, just months before British government ministers lost their power to set minimum terms for prisoners. In January 2001, Chris Gregg, a senior West Yorkshire detective, was selected to lead an investigation into 22 of the West Yorkshire deaths.

Dame Janet Smith, the judge who submitted the report, admitted that many more suspicious deaths could not be definitively ascribed to him. Most of his victims were elderly women in good health. In her sixth and final report, issued on 24 January 2005, Smith reported that she believed that Shipman had killed three patients, and she had serious suspicions about four further deaths, including that of a four-year-old girl, during the early stage of his medical career at Pontefract General Hospital, West Riding of Yorkshire.

Smith concluded the probable number of Shipman’s victims between 1971 and 1998 was 250. In total, 459 people died while under his care, but it is uncertain how many of those were Shipman’s victims, as he was often the only doctor to certify a death.

Born the middle child into a working class family on January 14, 1946, Harold Frederick Shipman, known as “Fred”, was the favorite child of his domineering mother, Vera. She instilled in him an early sense of superiority that tainted most of his later relationships, leaving him an isolated adolescent with few friends. When his mother was diagnosed with terminal lung cancer, he willingly oversaw her care as she declined, fascinated by the positive effect that the administration of morphine had on her suffering, until she succumbed to the disease on June 21, 1963. Devastated by her death, he was determined to go to medical school, and he was admitted to Leeds University medical school for training two years later, having failed his entrance exams first time, before serving his hospital internship. Still a loner, he met his future wife, Primrose, at the age of 19, and they were married when she was 17, and five months pregnant with their first child. By 1974 he was a father of two and had joined a medical practice in Todmorden, Yorkshire, where he initially thrived as a family practitioner, before allegedly becoming addicted to the painkiller Pethidine. He forged prescriptions for large amounts of the drug, and he was forced to leave the practice when caught by his medical colleagues in 1975, at which time he entered a drug rehab program. In the subsequent inquiry he received a small fine and a conviction for forgery.

A few years later Shipman was accepted onto the staff at Donneybrook Medical Centre in Hyde, where he ingratiated himself as a hardworking doctor, who enjoyed the trust of patients and colleagues alike, although he had a reputation for arrogance amongst junior staff. He remained on staff there for almost two decades, and his behavior incurred only minor interest from other healthcare professionals. The local undertaker noticed that Dr. Shipman’s patients seemed to be dying at an unusually high rate, and exhibited similar poses in death: most were fully clothed, and usually sitting up or reclining on a settee. He was concerned enough to approach Shipman about this directly, who reassured him that there was nothing to be concerned about. Later, another medical colleague, Dr. Susan Booth, also found the similarity disturbing, and the local coroner’s office were alerted, who in turn contacted the police. Later, a more thorough investigation revealed that Shipman altered the medical records of his patients to corroborate their causes of death. Hiding behind his status as a caring, family doctor, it is almost impossible to establish exactly when Shipman began killing his patients, or indeed exactly how many died at his hands, and his denial of all charges did nothing to assist the authorities.

Indeed, his killing spree was only brought to an end thanks to the determination of Angela Woodruff, the daughter of one of his victims, who refused to accept the explanations given for her mother’s death. Kathleen Grundy, an active, wealthy 81-year-old widow, was found dead in her home on June 24, 1998, following an earlier visit by Shipman. Woodruff was advised by Shipman that an autopsy was not required, and Kathleen Grundy was buried in accordance with her daughter’s wishes. Woodruff was a lawyer, and had always handled her mother’s affairs, so it was with some surprise that she discovered that another will existed, leaving the bulk of her mother’s estate to Dr. Shipman. Woodruff was convinced the document was a forgery, and that Shipman had murdered her mother, forging the will to benefit from her death. She alerted the local police, where Detective Superintendent Bernard Postles quickly came to the same conclusion on examination of the evidence. Kathleen Grundy’s body was exhumed, and a post-mortem revealed that she had died of a morphine overdose, administered within three hours of her death, precisely within the timeframe of Shipman’s visit to her. Shipman’s home was raided, yielding medical records, an odd collection of jewelry, and an old typewriter which proved to be the instrument upon which Grundy’s forged will had been produced.

Fingerprint analysis of the forged will showed that Kathleen Grundy had never handled the will, and her signature was dismissed by a handwriting expert as a crude forgery. Shipman had urged families to cremate their relatives in a large number of cases, stressing that no further investigation of their deaths was necessary, even in instances where these relatives had died of causes previously unknown to the families. In situations where they did raise questions, Shipman would provide computerized medical notes that corroborated his cause of death pronouncements. A police computer analyst then testified how Shipman had altered his computer records to create symptoms that his dead patients never had, in most cases within hours of their deaths. The audit goes on to estimate that he may have been responsible for the deaths of at least 236 patients over a 24-year period. Whatever the exact number, the sheer scale of his murderous activities meant that Shipman was catapulted from British patient killer to the most prolific known serial killer in the world. He remained at Durham Prison throughout these investigations, maintaining his innocence, and was staunchly defended by his wife Primrose and family. He was moved to Wakefield Prison in June 2003, which made visits from his family easier. On January 13, 2004, Shipman was discovered at 6am hanging in his prison cell at Wakefield, having used bed sheets tied to the window bars of his cell.

Serial killer Harold Shipman, his nickname being “Doctor Death,” attended Leeds School of Medicine and began working as a physician in 1970. Between then and his arrest in 1998, he killed at least 215 and possibly as many as 260 of his patients, injecting them with lethal doses of painkillers. The British health secretary announced the start of an inquiry into the suspicious deaths of more than 450 of Shipman’s patients. In July 2002, the first of several reports on the inquiry listed 215 victims, ranging from a 41-year-old man to a 93-year-old woman. His first victim was Eva Lyons, who died on March 17, 1975, a day before her 71st birthday. The inquiry also revealed that there had been several red flags along the way, including a report to police from local undertakers that Shipman’s patients were dying at a rate 10 times higher than other physicians. Had police carried out thorough investigations, at least some of Shipman’s victims might have been saved. The exact number of his murdered patients will never be known, but on Jan. 13, 2004, Shipman took one more life. On the eve of his 58th birthday, his jailers found him in his cell, a “swinger,” hanging from a noose he had fashioned from bedsheets. Prison psychiatrists expressed surprise, saying that the doctor had shown no signs of being a suicide risk. 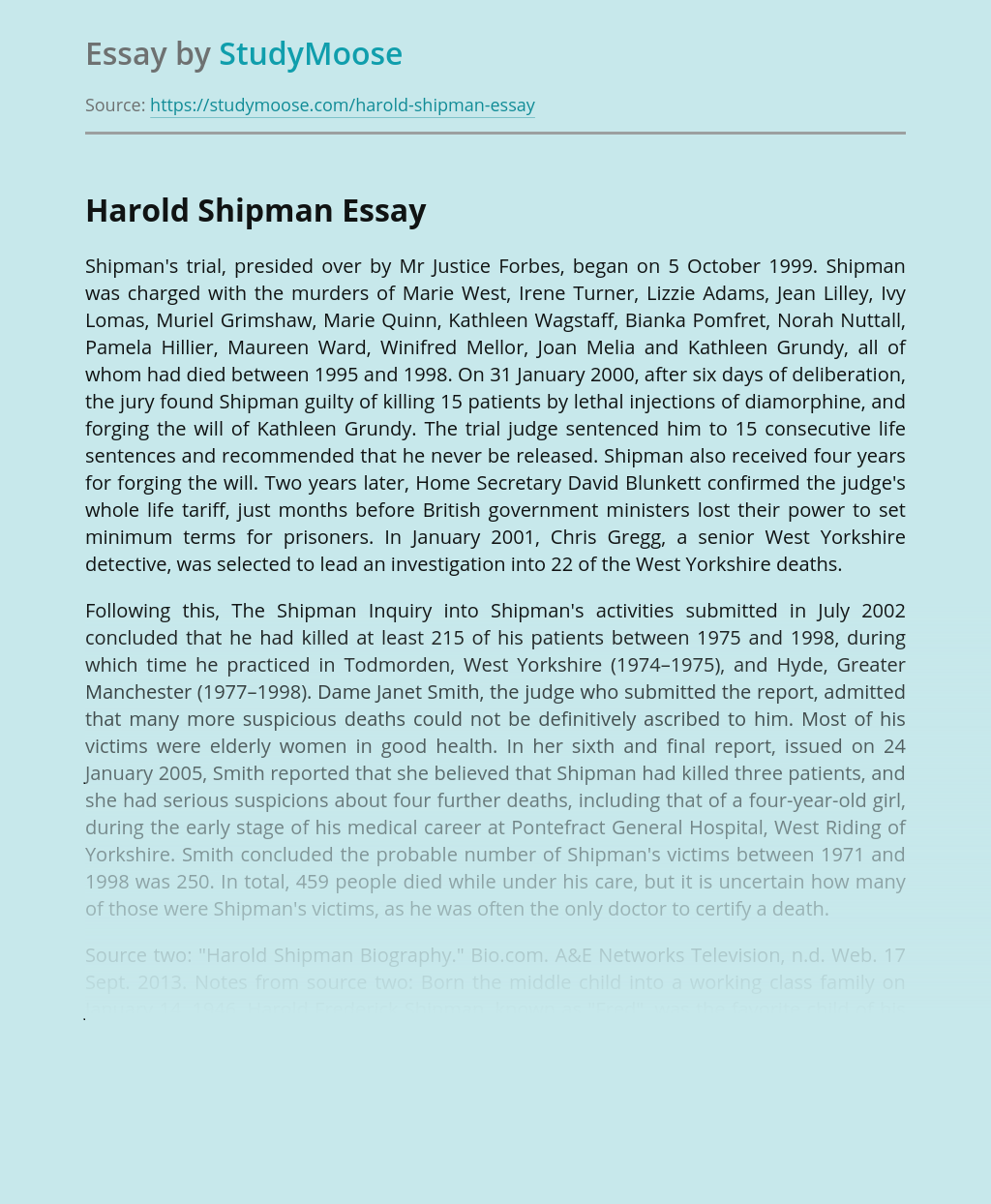 Don’t waste time
Get a verified expert to help you with Persona of Harold Shipman
Hire verified expert
$35.80 for a 2-page paper
Stay Safe, Stay Original