Introduction Dynamic equivalence, as a respectable principle of translation, has been around in the translation sector for a long time. It is the method whereby the translator’s purpose is not to give a literal, word-for-word rendition but to transfer the meaning of the text as would be best expressed in the words of the receptor (native) language. In this paper, we will focus on the criteria necessary to qualify dynamic equivalence with special reference to Eugene Nida, as well as distinctive viewpoints from famous translation theorists.

Don't use plagiarized sources.
Get Your Custom Essay on Equivalence in Translation Just from $13,9/Page

Also, we will talk about the formal equivalence and structural equivalence. Finally, we will have the criticism of dynamic equivalence. Eugene A. Nida and ‘Dynamic Equivalence’ Eugene A. Nida has the deep conviction justified by his research that anything that can be said in one language can be said in another with reasonable accuracy by establishing equivalent points of reference in the receptor’s culture. Communication across languages and cultures is thus viewed as a processof translational equivalence of messages in appropriately reconstructed formal and semantic structures.

Nida deals with both theoretical and practical problems in his extensive works on translation. In his view, translation is a work of re-structural in the target language of the linguistic production of the source language, and this re-organize takes into account both form and meaning. Nida’s most normative and most controversial contribution to translation theory is his notion of ‘dynamic equivalence’, as opposed to that of ‘formal correspondence’ (Nida, 1993: 123-24).

“Dynamic equivalence’ is characterized by Nida as the closest natural equivalent to the source-language message, whereas ‘formal correspondence’ distorts the message (Nida and Taber, 1982: 202-3). He pointed out more recently that the validity of a translation cannot be judged with a comparison of corresponding lexical meanings, grammatical classes, and rhetorical devices. What is important is the extent to which receptors correctly understand and appreciate the translated text. (Nida, 1993: 116). In Nida’s work with Charles R.

According to Nida, translating consists in producing in the receptor language the ‘closest natural equivalent’ to the message of the source language, first in meaning and secondly in style. He seems to have recognized the lack of any absolute correspondence, yet still points up the importance of finding the closest equivalence. By ‘natural’, he means that the equivalent should not be ‘foreign’ either in form or meaning. That is to say, a good translation should reveal its non-native source. It is recognized that equivalence in both meaning and style cannot always be retained.

When, therefore, one must be abandoned for the sake of the other, the meaning must have priority over the stylistic forms (Nida, 1975: 33). Famous Theorists Viewpoints Other than Nida, there are many famous translation theorists have suggestion and discussion on this topic. Vinay and Darbelnet view equivalence-oriented translation as a procedure which ‘replicates the same situation as in the original, whilst using completely different wording’ (Kenny, 1998: 342). If this procedure is applied during the translation process, it can maintain the stylistic impact of the SL text in the TL text.

Thus, equivalence is therefore the ideal method when the translator has to deal with proverbs, idioms, cliches, nominal or adjectival phrases and the onomatopoeia of animal sounds. They conclude by saying that ‘the need for creating equivalences arises from the situation, and it is in the situation of the SL text that translators have to look for a solution’ (ibid. : 255). Indeed, they argue that even if the semantic equivalent of an expression in the SL text is quoted in a dictionary or a glossary, it is not enough, and it does not guarantee a successful translation.

Say, Take one is a fixed expression having as an equivalent French translation Prenez-en un. Though, if the expression appeared as a notice for free samples in a large store, the translator would have to look for an equivalent term in a similar situation and use the expression Echantillon gratuit (ibid. : 256). Jakobson introduced the new notion of ‘equivalence in difference’ to the theoretical analysis of translation. On the basis of his semiotic approach to language, he suggests three kinds of translation: 1) Intralingual (within one language), 2) Interlingual (between two languages), and 3) Intersemiotic (between sign systems).

Jakobson claims that, in the case of interlingual translation, the translator makes use of synonyms in order to get the ST message across. This means in interlingual translations there is no full equivalence between code units. Hence, ‘translation involves two equivalent messages in two different codes’ (Jakobson, 1959: 233). He adds that from a grammatical point of view languages may differ from one another to a greater or lesser degree, so the translator may face the problem of not finding a translation equivalent; then it is up to the translator to choose the most suitable way to render it in the TT.

The use of formal equivalents might at times have serious implications in the TT since the translation will not be easily understood by the receptor. According to Nida and Taber (1969), translating consists in reproducing in the receptor language the closest natural equivalent of the source language message, first in terms of meaning and secondly in terms of style.

Hence, dynamic equivalence is defined as a translation principle according to which a translator seeks to translate the meaning of the original in such a way that the TL wording will trigger the same impact on the TC audience as the original wording did upon the ST audience. It attempts to discern and render the thought of the original.

Nida, favouring dynamic equivalence as a more effective translation procedure, views that the product of the translation process, which is the text in the TL, must have the same impact on the different readers it was addressing. Nida cites his examples from Bible translation, where the phrase ‘Lamb of God’ would be rendered into ‘Seal of God’ for the Eskimos because the lamb doesn’t symbolize innocence in their culture.

As a result, the texts become universal as there is no difference in meaning in terms of source texts and target texts. In Nida and Taber research, at least 90% of the fundamental structures of all languages are quite similar, but not exactly the same in terms of format and structure Also, each culture group and social group has its own sociolinguistics nature. From this, we can know it is impossible and not necessary to have complete dynamic equivalence since no two kinds of languages are exactly the same and the existence of social and linguistic gaps among different groups.

Moreover, translators may translate their works by combine the above two methods. For this part, we can go through the suggestion of translation experts which shown as before. From the behaviour of translators we have this finding: Finding 3: Dynamic equivalence is immeasurable and has not standard format to follow Today, the fast and huge changes in the political situation, business development, technological improvement, and living environment give a large impact to the translation sector in which many news terms are created follow the changes, such as “@”, ‘e-element’.

Changes and adjustment are needed in dynamic equivalence When translators do their translator works, they should not just focus on the author sides and and the their beliefs, they also need to think about the readers interests, to see whether the readers can easy to understand the translated texts and get the ideas after the reading. Here, our last finding is:

Since there is no absolute answer on this topic, so no definite answer can be provided. What we can say is ‘to be a good translator, one has to be sensitive to the overall environment, to be able to apply right equivalence approach in right time, to make compromise, to be able to balance each aspect, and to be able to subjective all the time. Bibliography 1. Nida, E. A. (1993). Language, Culture and Translating. Shanghai: Shanghai foreign Languages Education Press. 2. Charles A. T. (1982). 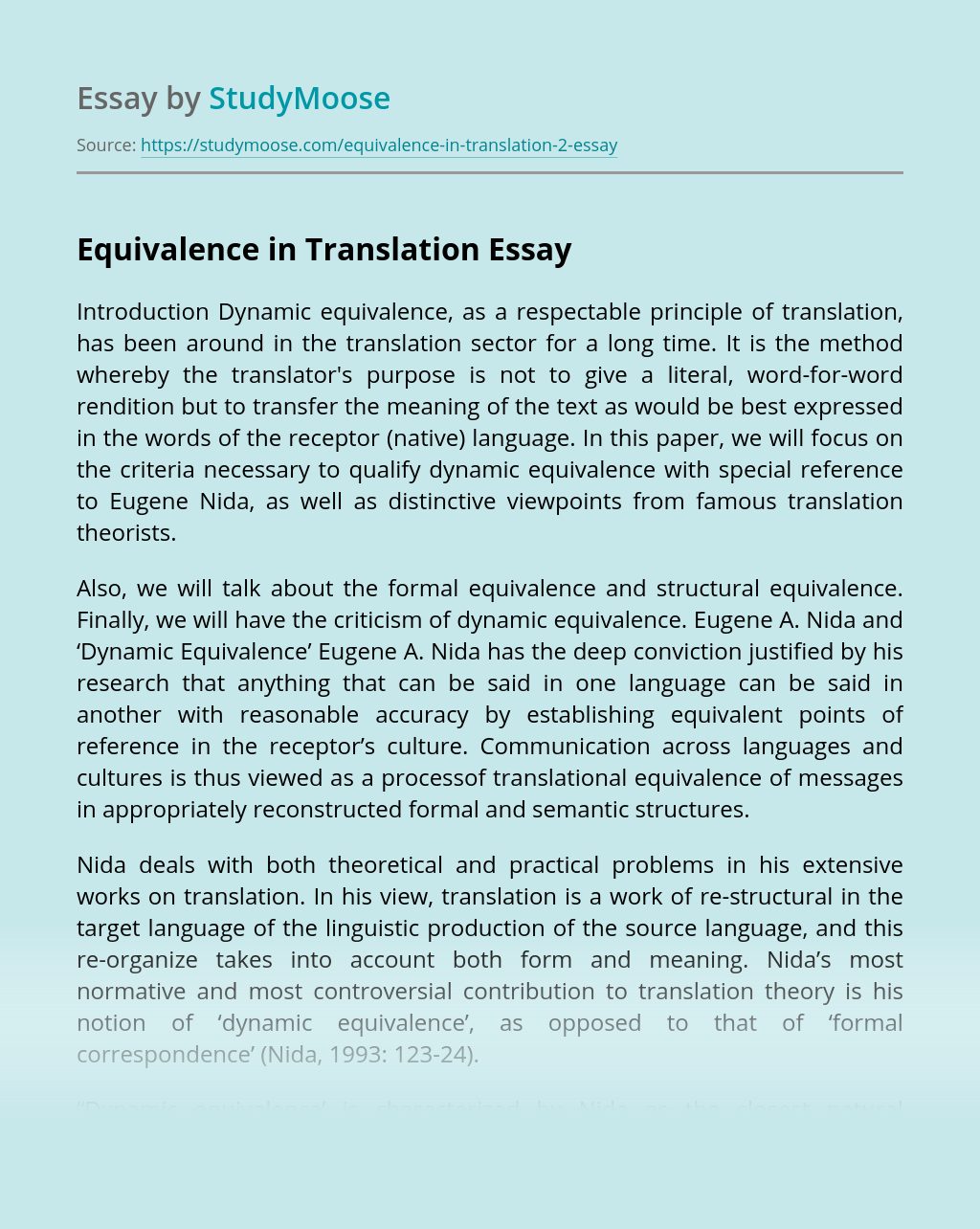 It can be surmised that at one point or another in one’s life copulation will be a part of a species life cycle. In order to fully understand the sexual phenomenon that embraces every living and multiplying species this research will study sexual behaviours exhibited by living beings and will focus mainly on the study... VIEW ESSAY

Karl Marx and Max Weber are among the famous theorist who formed the pillar of the study of society. This come about in their contradict theories the conflict and protestant ethic respectively. It is understood that these two people lived in different eras, Marx being exposed to conditions and perspectives of the eighteen century whilst... VIEW ESSAY

1. Describe the organizational structures and devices 3M uses to encourage entrepreneurial activity. Why do they work? 3M heavily based its business on innovation and while doing this it always supported its employees in terms of being innovative. 3M also always followed the alternative ways in order to increase their profit and market share, and... VIEW ESSAY

This paper will include: the current health care expenditures whether spending is too much or not enough, where the nation should add or cut, how the public’s health care needs are paid and provide a forecast for: the future economic needs, why these needs must be addressed, how I envision these needs will be financed... VIEW ESSAY

Executive Summary As of year 2000, global motorcycle market is dominated by a handful of players. Japanese manufacturers such as Honda, Yamaha, and Kawasaki are low cost players while Harley and Ducati are in the high end of the spectrum and have been able to successfully establish themselves as a premium brand. Harley dominates the... VIEW ESSAY