Equality in America Represented in Harrison Bergeron by Kurt Vonnegut

In Kurt Vonnegut’s “Harrison Bergeron,” “The year was 2081, and everybody was finally equal” (Vonnegut 233). The idea that every American is equal seems almost mythical. Numerous societies over the centuries have tried to achieve this unattainable goal, and none have succeeded, so what happens to a nation when a government’s strategies become too radical? The story parallels with communist governments throughout history, in countries such as China and Soviet Russia. “Harrison Bergeron” is a perfect illustration of how government extremes, and manufactured equality are dangerous.

Don't use plagiarized sources. Get your custom essay on
“ Equality in America Represented in Harrison Bergeron by Kurt Vonnegut ”
Get custom paper
NEW! smart matching with writer

America’s government, in this story, stripped every person of their natural abilities and individuality to accomplish the ultimate mission of equality. People were forced to wear handicaps to level them to a standard set by the government. George Bergeron was forced to wear radio transmitters in his ears “…to keep people like [him] from taking unfair advantage of their brains” (Vonnegut 234). The transmitters would blast unbearable sounds in his ears, so he would not be able to think.

There was an established fear of people with intelligence; they risk the government being overthrown.

Not only was intelligence a concern of the authorities, but beauty and physical strength were as well. The ballerina’s had to wear masks to cover their alluring facial attributes. Harrison, the ballerinas, and George all had to wear weights to physically wear them down. People with stamina were considered a threat to those who were weaker. The news reporter, “like all announcers, had a serious speech impediment”, to prevent him from being to gifted at his job (Vonnegut 235).

The ideal is to not be physically fit, attractive, or intelligent enough to make anyone feel inferior, much like Hazel Bergeron, a rather senseless character, whom did not need a handicap. Hazel happens to be similar to the Handicapper General, Diana Moon Glampers, whom also does not wear handicaps. However, Diana Moon Glampers did not wear a handicap, because she symbolizes the superiority of the regime. There always has to be someone on top, better than equal, and Diana takes that role.

The effect of the government’s policy created a country filled with people unable to reach their capabilities, ensuring the halt of innovation, development, and creativity. Not only did the government kill the potential of the nation, but they instilled fear among the American people. When George mentions, “Two years in prison and two thousand dollars fine for every ball I took out….we’d be back right back to the dark ages again, with everybody competing against everybody else,” it is easy to understand how internalized the goals of the government are in the citizens (Vonnegut 235). The belief that equality comes with the expense of liberty and personal achievement is what ultimately leads to the rebellion of Harrison Bergeron.

Harrison, represents the glimmer of individuality still left in some souls of the American people. As Harrison “…tore the straps of his handicap harness…smashed his headphones…flung away his rubber-ball nose…” he unleashed his true self (Vonnegut 237). Many people were longing to do the same, and Harrison inspired them for a short while to look beneath their handicaps. The brief revolution suggests that citizens are responsible for change in society, and must be brave and take a stance against the rules and standards in place. Harrison, whom is strong, good-looking, and smart, not only represents personality, but defiance. He has no regard for the authority, and risks his life to prove it. The tragic murder of the beloved protagonist implies that there is no room for resistance; although there is a disobedience in the nation, Diana Moon Glampers (and other government officials) will not stand for it. The slaughter of Harrison Bergeron is just a warning to other Americans.

Despite the trials that nations have gone through to achieve equality, and their egalitarian views, “Harrison Bergeron” has demonstrated extremes in government policy can sometimes lead to devastation and tragedy. Manufactured equality is hazardous, and even more so when it affects the people’s’ basic rights and freedoms. It is unrealistic that a country could set all of it’s citizens to an equilibrium, let alone without rebellion, so it is important to know that people are different from each other, and our differences must be appreciated. 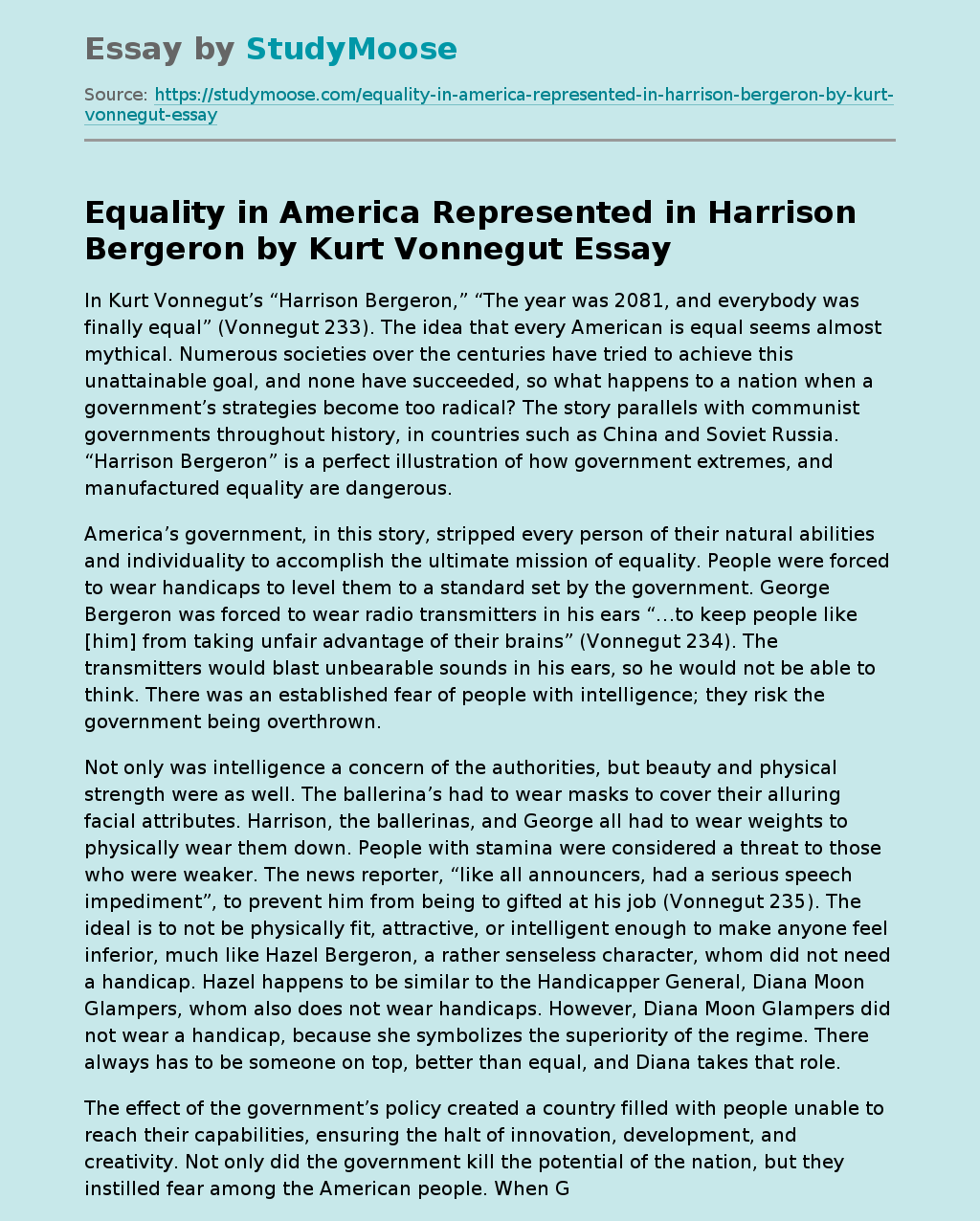