Usually, the standard form of racism is prejudice, discrimination, hatred, violence or superiority of one race over another. However, there is one overlooked form of racism, and it takes place without people even being aware of it. This inequality is known as environmental racism. This form of racism occurs in marginalized, poor, immigrant, or communities of color. The living environment of these low- income communities isn’t safe because the toxic wastes surround the areas, factories, and fracking plants. The public policies and industrial activities differentially affect the minority communities.

Don't use plagiarized sources. Get your custom essay on
“ Environmental Health Disparities and Environmental Justice ”
Get custom paper
NEW! smart matching with writer

These communities often don’t have clean drinkable or usable water for the household, exposure to polluted air, and the children don’t have safe playgrounds. Over the years our environment has undergone degradation and action is being taken to correct this effect. However, little concern is paid by powerful and wealthy communities on environmental pollution in regions occupied by minority groups.

Proficient in: Protection Of Our Environment

Additionally, environmental racism is a representing of social inequality; researches have shown the race is a strong predictor for waste generating facilities than socioeconomic class (Atlantic, 2017). The different geographical distribution of environmental toxic indicates that facilities emanating high degrees of pollution are apt to be located in res of low property value as well as high minority populations.

Residents in these environments are therefore vulnerable to health risks associated with pollution such as lead poisoning, asthma, leukemia and other forms of cancer (Pulido, 2017).

It is a result of residents living close to toxic wastes or unhealthy working spaces that do not enforce which safety measures. For instance, vicinity along Mississippi River also named as cancer-alley, where often disposal of hazardous wastes and nuclear waste occurs in the Native American reservations since the environment is not subjected to state jurisdiction. The environmental laws on Native Americans lands are more lenient making them vulnerable to environmental racism. From the research carried out by National Center for Environmental Assessment, data concluded the African American had been exposed more environmental pollutants than the white neighborhoods while the pollutants exposure to Hispanic community was 1.0 percent higher than the white. Additionally, people living in poverty, the vulnerability was 1.3 times higher than wealthy individuals.

According to environmental justice activists, poisonous facilities are placed in nonwhite areas since they are impoverished and the habitats have limited political power, disenfranchised and are likely to offer less resistance. The environmental laws set provide little protection to minority groups, and disapproval of numerous complaints on the disposal of toxic waste in these communities is frequent (Smith, 2014). According to reports findings the penalties for toxic wastes and pollution law violation were higher in neighborhoods occupied by whites that regions occupied mainly by minority groups. This environmental disparity which takes place regardless of whether a community is poor or middle class occurs as a result of biased enactment of the governmental laws.

Racism has had a significant effect on housing patterns, utilization of land and infrastructure expansion. Development of housing units saw the white and wealthy individuals reside in new and luxurious communities whereas the minority and poor occupied regions that are rundown. Currently, in several cases, we can see that zoning laws have encouraged environmental racism. Expulsive zoning regulations have pushed out citizens in specific communities and permitted industries to occupy these lands. These industries then pollute the water, air, and soil. Moreover, these zoning regulations describe area for industrial, housing and commercial use; hence they enforce thin land usage restrictions. As a result of these restrictions specific individuals, especially minorities of low socioeconomic status are forced to leave their lands and hand over their properties to the industries which destroy and cause environmental degradation (Pulido, 2017). Without strict enforcement systems, the nation will continue to experience environmental racism and discrimination.

Environmental racism is not limited to living in polluted areas but also identified in the historical placement of minority groups on the undesirable geographical locations like flooding regions and cities susceptible to adverse meteorological conditions (Weber, 2018). Adverse weather conditions have distressing effects on people of color and cause displacement from homes and death. The disparity is seen in rebuilding minority neighborhoods, whereby the government uses less capital and efforts in reconstructing the community compared to restoring white and high-income regions. Also, it is evident when polluting companies from developed nations that monitor their activities closely shift their production to developing countries where less strict environmental control. Additionally, the ecological disparity is apparent in severe working conditions, for example, the sweatshops textile industries which shift their operations to developing nations where laws are not strict. Their employees receive below minimum wages for extended hours and in poor conditions. The managers often blackmail these employees thus unable to seek necessary help or form unions to fight for a better working environment since.

Food industries along with their slaughterhouses and farms contribute to environmental contamination due to manure lagoons which contain animal wastes. Water contamination arises when leaching of nitrates a compound found in fertilizers, manure and pesticides into underground water takes place. People living near these farms frequently complain of throats, eyes and nose irritations, an increase in anger, confusion, depression, and fatigue incidents. Major corporate take advantage of the poverty in minority communities and believe creating employment will reduce environmental complaints from these neighborhoods (Pellow, 2016). These animal factories have contributed to adverse climate changes and health issues due to pollution. San Joaquin is considered the smoggiest region due to animal farm waste, industrial emissions, pesticides, dust particles and soil blown from the animal farm.

Another form of environmental racism is when workers are forced to work in facilities that do not provide safety measures against hazardous compound such as asbestos. Moreover, discrimination in environmental amenities such as clean up and garbage collection and transportation is an example of environmental racism (Holifield, 2018). Despite the recent climatic changes, individuals still see the environment as a set of natural forces that does not discriminate against any community. Unfortunately, even individuals who believe human actions influence every molecule in places human reside such as the air we breathe, water to climate repeatedly refuse to acknowledge racism as a factor to environmental degradation.

Lead exposure is a prominent form of environmental racism; lead-based paints were used in house construction before researched showed its concentration proven as an environmental toxin. However, older houses in which lead-based paints were used still exist and are residence to minority and low-income population (Martinez-Alier, 2016). Despite restrictions on using lead paints study show that children from low income and minority neighborhoods are more prone to lead poisoning than children from white and high-income communities. Lead poisoning causes numerous health effects especially to children such as brain developmental problems, seizures and anemia.

Ecological disparity also occurs in high-income neighborhoods According to Smith (2014) one of the common assumptions is that this inequality occurs only in low-income societies and riches safeguards individuals from pollution. This assumption interested researchers in investigating and acquiring data on communities occupied by high-income non-white citizens. Data from the research proved that individuals of color with high socioeconomic status are likely to live regions of higher contamination rate due to exposure from outdoor pollutant.

On the other hand, white citizens reside in less polluted areas, therefore, minimizing the health risks from contamination; as a result, race and demographic influence environmental inequality. Minority groups are not only exposed to more pollution than white communities but also generate fewer pollutants. For example, African American produces 20 percent less air pollution than white Americans. According to Martinez-Alier (2016) due to social injustices and structural imbalances, minorities tend to suffer more. Critics claim that the placement of toxic waste facilities is not discriminatory, but market forces influence the positioning of these industries. Therefore, landfills, incinerator, and other facilities are more likely to be located where land is affordable. These cheap housing for low-income communities are in these regions. Nevertheless, minority groups and people of low socioeconomic status move to these lands because they offer affordable home.

The United States Environmental Protection Agency was established to ensure development, application, and enactment of environmental laws, policies, and regulations (Atlantic, 2017). However, EPA has on several occasions failed to fulfill its obligation due to the rejection of numerous complaints from minority communities against polluting companies. Environmental justice advocates argue that minority and the poor communities do not freely rational choices to occupy regions with a higher risk of environmental pollution.

Environmental justice activist has been in the frontline against the development of polluting facilities near minority neighborhoods without any communication with the residents and empowered marginalized communities (Pellow, 2016). Our daily activities contribute in one way or another towards environmental racism. However, we can change our habits to ones that do not condone polluting facilities that affect minorities. For example, choosing vegan nutrition and condemning food industries that pollute our environment.

In conclusion, race and social inequalities influence environmental discrimination. Therefore, in attempts to reduce the adverse climate changes, environmental racism has to be minimized. Legal, financial and resources should be made available to minority groups in fighting against zoning laws and polluting facilities. Implementation of stringent environmental policies is essential for the attainment of environmental justice. Social and government policies have greatly influenced ecological disparity, to tackle this disparity identification of ethical inequalities of environmental necessary. 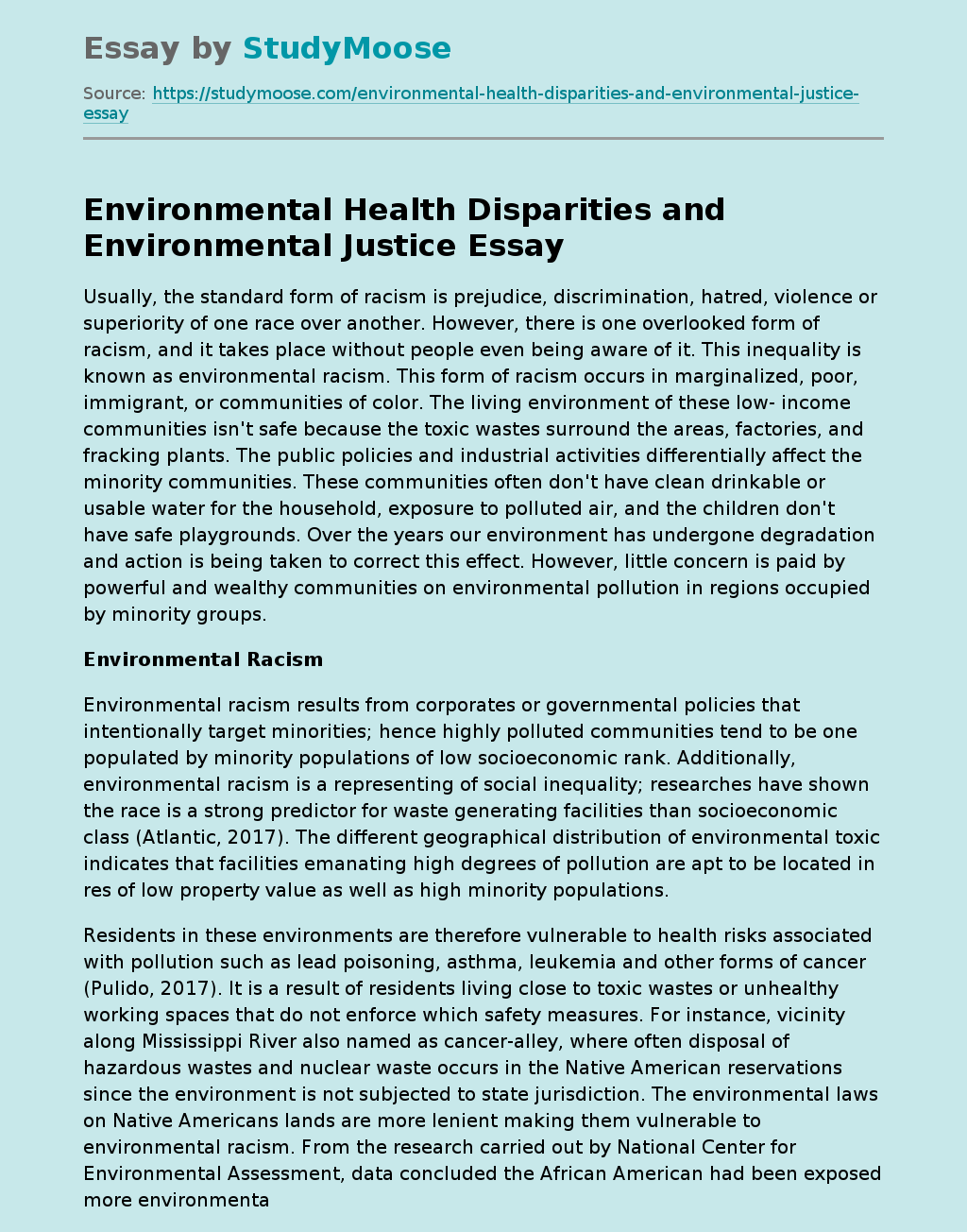