Younger Brothers and Sisters were brought into this World to torture their older siblings. In fact, all younger siblings should be sent to a foster home so they do not get in the way of us, the more mature and advanced older siblings, but we are just too afraid to say it. Don’t you just DESPISE it when it when they say, “It wasn’t me!” when it so obviously was! Even the dog sitting there knows the truth. The little scallywags could get away with murder.

Don't use plagiarized sources. Get your custom essay on
“ English rant younger brothers and sisters ”
Get custom paper
NEW! smart matching with writer

Little brothers and sisters are so capricious that one minute they want you to play with them and the next minute they are blaming the mess in their bedroom on you. Make your mind up!

This caused him to stay in his room locked for a week with no dinner, all because of his younger sibling. I am positive that countless other victims with younger brothers and sisters endure incidents such as this, every day of their lives. The suffering doesn’t end there.

A study of 14,000 eldest British children found that those with 3 siblings were, on average, an inch shorter than their younger brothers and sisters because they were denied the essential nutrients needed to grow. Stand against this horrendous injustice to older siblings and sign the petition we’ve all been waiting for: Parents! One Child Only! It’s obvious.

This is a true story and it happened to me. I have two younger demons, a brother and a sister. One day we were in Switzerland and I was on a fifteen-metre diving board. I was contemplating whether or not I should jump into the water and all of a sudden, the little devils thrust me forward as hard as they could leading me to inevitably hit the water, and worst of all, belly-flop as I fell, which is one of the most excruciating things ever.

Worse still, as I was rotating mid air, I realized that I might hit the concrete and die, all because my moronic younger siblings didn’t have a high enough IQ to contemplate what could really happen. Mid-flight, I was spinning and saw how close I actually was to the concrete. When I landed in the water I luckily scraped my foot against the ground. If I had made one more rotation, my head would have hit against the concrete and I would surely have died. As it was, I couldn’t breathe: I had just escaped a life or death situation. The thing that incensed me the most was that they were laughing obnoxiously! Yes you heard right, despite comprehending that I had nearly died, they were laughing!

What else have we to do? Younger siblings are so brainless, senseless and thick-headed. Do you really want younger siblings controlling and torturing you? Satan’s little helpers are running rampant everywhere. It must stop. 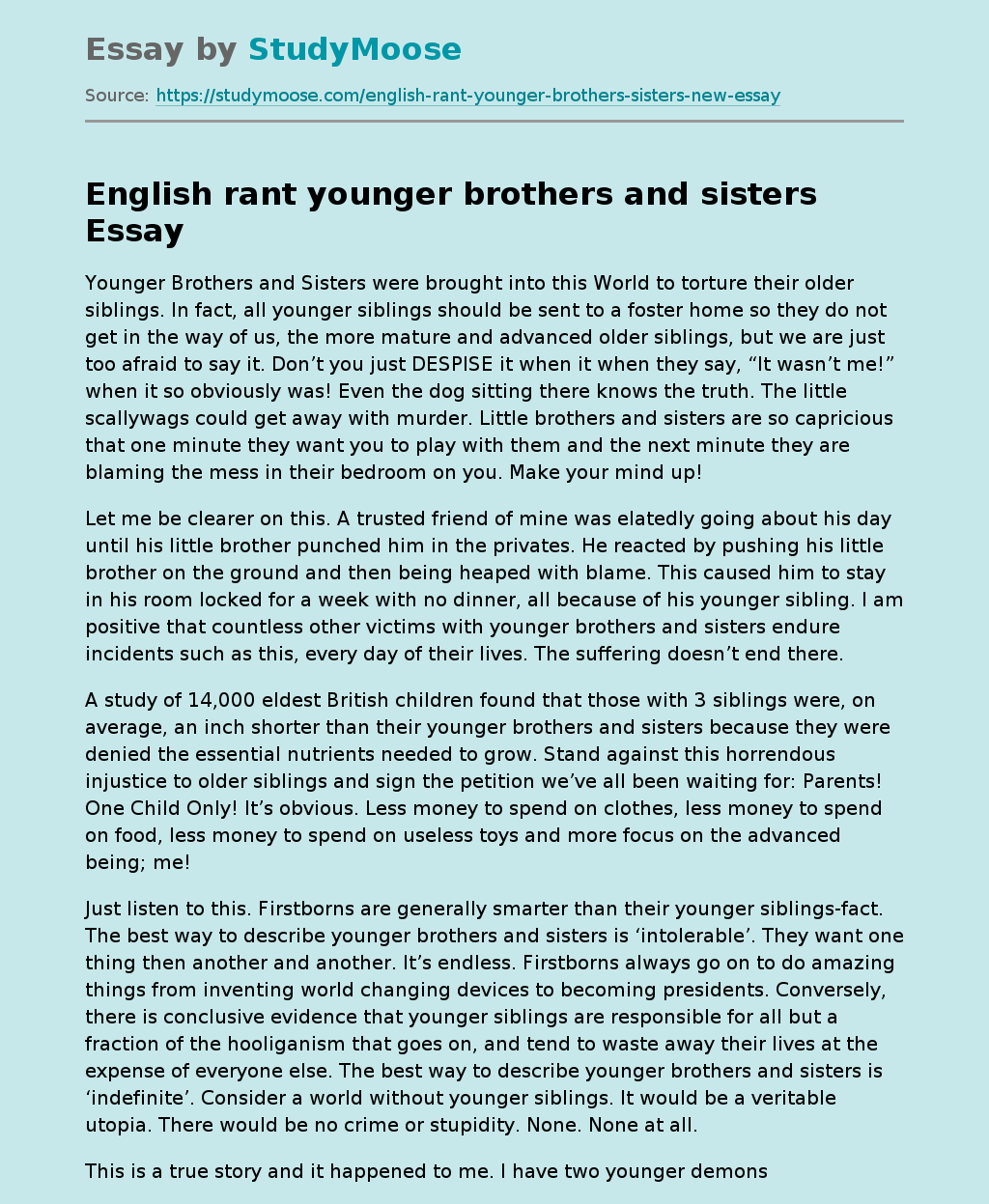