English has spread rapidly, even since independence, either as a first language or as a medium of education for non-native speakers (Platt and Weber, 2002). The actual range of varieties of English is much greater than is found in the British Isles. On the one hand we can speak of an acrolect or high status variety, and on the other a basilect or low status variety, with the mesolect occupying the intermediate position.

These terms are usually descriptive of what is known as a post-creole continuum—that is the range of non-discrete varieties in a post-colonial situation ranging from the acrolect, which is generally very close to the standard language of the colonial power, through to the basilect, which structurally resembles a creole.

It is sufficient here to characterise a creole as a mixed language, resulting historically from contact between speakers of different and mutually unintelligible languages.

Creoles are usually associated with colonial situations and are generally assigned a very low social status.

Basilectal speakers, who occupy the lowest position in a post-creole continuum, are often quite unintelligible to speakers of the acrolect. All speakers occupy a range on this acrolect—basilect continuum, which correlates closely with their social status, shifting along it according to social context in much the same way as British speakers manipulate linguistic variables. Of course, the extent of linguistic difference is much greater.

Such continua have been described in Jamaica by De Camp (2001) and in Guyana by Bickerton (1995), and it is likely, we should note, that these studies will be of increasing relevance to an understanding of the sociolinguistic structure of ethnic minority communities in Britain.

A detailed account of the structure and function of pidgins and creoles is not directly relevant here, but interested readers are referred to Todd (2000) for an introductory account of the social, political and linguistic issues involved.

Although respectable Victorians were already reacting strongly against the prescriptive attitudes of the eighteenth century, the most extreme anti-prescriptive statements, as far as we know, are those made by some members of the ‘American structuralist’ school of linguistics. Bloomfield (1993:22) felt that discovering why ain’t is considered bad and am not good is not a fundamental question in linguistics, and he thought it strange that ‘people without linguistic training’ should devote ‘a great deal of effort to futile discussions of this topic’.

Bloomfield was certainly implying that the study of prescriptivism was not of central interest to linguistics; he was thereby limiting the field of linguistics to a descriptive study of form and system in language which takes relatively little account of language as a social phenomenon. Some of Bloomfield’s followers have gone further than this and have attacked ‘unscientific’ approaches to language with missionary zeal. C. C.

Fries (1997) seems to have equated traditional school grammar with prescription (which was by definition ‘bad’ and ‘unscientific’ in the view of structural linguists of the time), and in his book on English syntax he went so far as to even reject traditional linguistic terms such as ‘noun’, ‘verb’ and ‘adjective’. Fries’s work was directed towards the educational system at the ordinary consumer. Anxious to assure all his readers that their use of language was just as good as that of anyone else, he proclaimed that there is no such thing as good or bad, correct or incorrect, grammatical or ungrammatical, in language.

English in Western Europe and America Although linguistic scholars would certainly dispute the details of this pronouncement, they have continued (for the most part) to assert or assume that their discipline is descriptive and theoretical and that they do not deal in prescription. In Western Europe and America most theoretical linguists would still affirm that all forms of language are in principle equal.

As Hudson (2002:191) has put it: Linguists would claim that if they were simply shown the grammars of two different varieties, one with high and the other with low prestige, they could not tell which was which, any more than they could predict the skin colour of those who speak the two varieties. Although some evidence from work by social psychologists (Giles et al. , 2000) lends some support to Hudson’s point, we do not, in fact, know whether standard languages can be conclusively shown to have no purely linguistic characteristics that differentiate them from non-standard forms of language (the matter has not really been investigated).

Standard English: UK Variety In the UK, one vehement critic of the supposed malign influence of linguistics on English language teaching is John Honey (1997-2003). He has named an array of linguistic scholars (including—astonishingly—Noam Chomsky, who has never been concerned with educational or social issues), as encouraging a neglect of Standard English teaching in schools. This is an entirely false claim. It is true that there has been some opposition to the teaching of English grammar, but in our experience this has arisen mainly from the preference of lecturers for literature teaching.

Far from discouraging ‘grammar’, university linguists have been closely involved in maintaining and encouraging its teaching. No one has ever opposed the teaching of standard English, and many of those named by Honey as ‘enemies’ of standard English have devoted much of their careers to teaching it—training students to write clear and correct standard English. Experienced teachers will not take kindly to an attack that simply appears to them as ignorant, presumptuous and pointlessly offensive.

The linguist’s academic interest in the human capacity to learn and use language is not a threat to the teaching of Standard English, and it can be a great benefit. It does not follow from the educational necessity to focus on the standard that we should neglect to examine and explain the different norms and conventions of speech and writing, or that we should fail to acknowledge that standardised usage is most fully achieved in writing. Nor does it follow that we should neglect the fact that non-standard spoken vernaculars have grammars of their own.

To investigate the structure of language varieties is an intellectual requirement that cannot be compromised, and which in no way contradicts the importance of the teaching of literacy in a standard language. Amongst other things, research on real language in use can help us to clarify and understand what standard English actually is and appreciate more exactly what its roles and functions are. We will not improve practical language teaching by ignoring such matters or by maligning those who study conversational speech and non-standard vernaculars as ‘enemies of standard English’.

The authors of elementary books on linguistics, however, have usually been anxious to dissociate their account of the subject from that of traditional handbooks of correctness. As we have seen they usually dismiss prescription routinely, and assert that linguistics is descriptive. Their general point—that, if one is to study the nature of language objectively, one cannot make prior value-judgments—is frequently misunderstood, and it has sometimes called forth splenetic and misinformed denunciations of linguistics as a whole.

One example amongst many is Simon (2002). In an essay entitled ‘The Corruption of English’ (2002), Simon blames structural linguistics and literary structuralists for an alleged decline in language use and for permissive attitudes to language: ‘What this is, masquerading under the euphemism “descriptive linguistics”…is a benighted and despicable catering to mass ignorance under the supposed aegis of democracy. ’ His essay is outspoken and full of emotive language (‘pseudoscientific mumbo jumbo’, ‘rock-bottom illiteracy’, ‘barbarians’, ‘vandalism’, etc.

), and it betrays ignorance of what linguistics is about. To Simon, linguists are almost equated with some menace that is threatening Western (i. e. American) civilisation from outside. It is unfortunate that misunderstandings and misapplications of the American structural linguists’ teaching should have made it seem reasonable for anyone to write in this ignorant way. As many people still interpret descriptive linguistics as inimical to standards of usage, there has clearly been some failure of communication between linguistic scholars and the general public.

One reason for this is that ‘mainstream’ linguistics has concentrated more on the abstract and formal properties of language than on language in its social context. Bloomfield (1993), as we saw above, considered that prescription was irrelevant to linguistics as a ‘science’. Yet some linguists have been directly interested in prescription. Haas (2002), for example, has pointed out that prescription ‘is an integral part of the life of language’.

By refusing to be interested in prescription, he adds: ‘linguists only ensure that every enterprise of linguistic planning will be dominated by ignorant enthusiasts and incompetent pedants’ (Haas, 2002:3). Since Haas made these comments, some social and educational linguists have been very active in commenting on public attitudes and educational policies, and some have represented the subject on advisory committees. A general linguist, R. A. Hudson, is responsible for the Language Workbooks series, published by Routledge.

Several relevant books on language variation have appeared, and linguistic correctness was the topic of the 1996 BBC Reith Lectures, delivered by Jean Aitchison (1998). In the USA much of the interest in language differences has been driven by public concern about the language of ethnic minorities. In 1997, the Linguistic Society of America published a document inspired by a controversy about ‘Ebonics’ (African American Vernacular English), which was recognised by the Oakland (California) School Board as a legitimate form of language.

It ended with the following comments: There is evidence from Sweden, the US, and other countries that speakers of other varieties can be aided in their learning of the standard variety by pedagogical approaches which recognize the legitimacy of other varieties of a language. From this perspective, the Oakland School Board’s decision to recognize the vernacular of African American students in teaching them Standard English is linguistically and pedagogically sound. 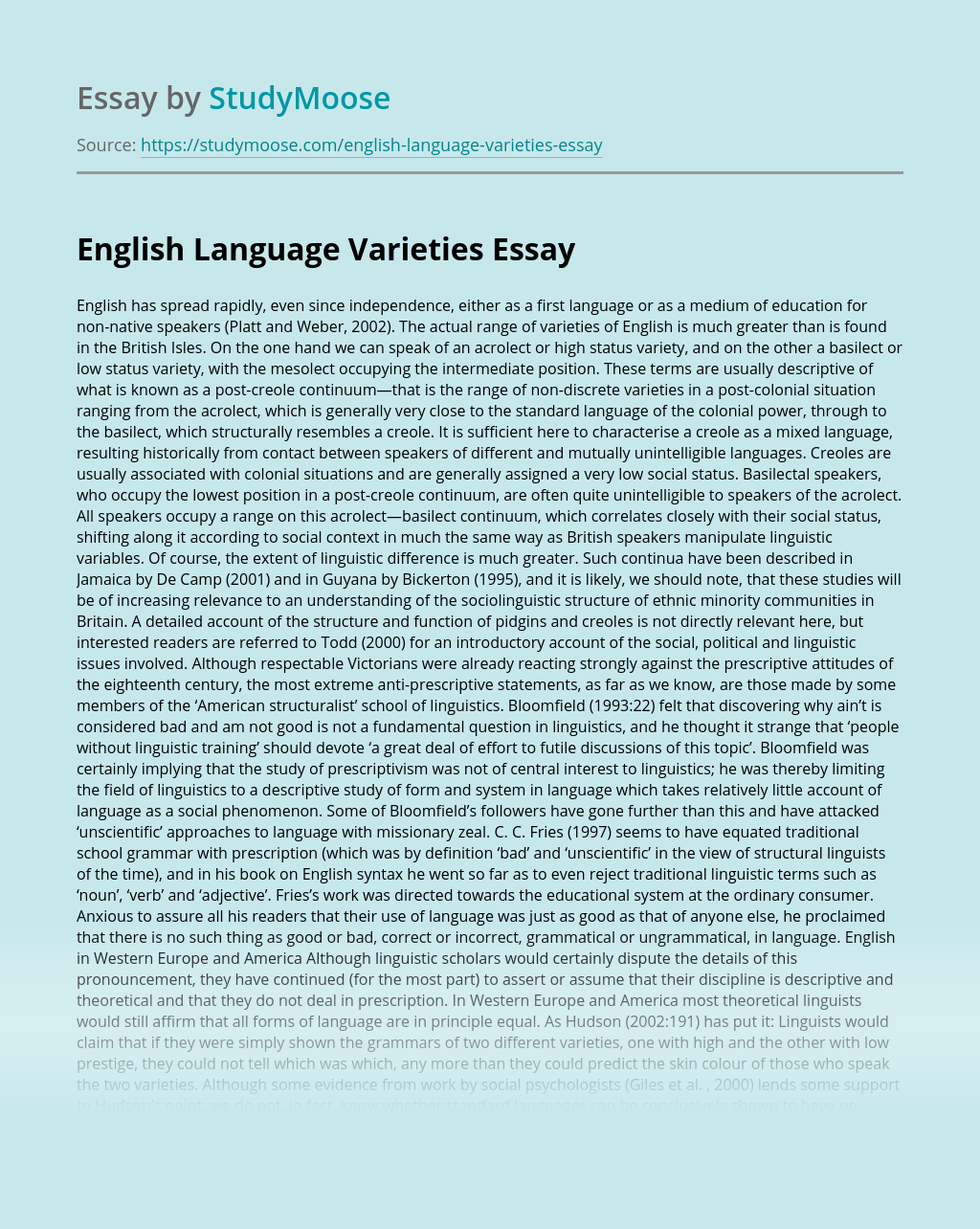