Emily Dickinson and Her Social Seclusion

Dickinson’s I Dwell in Possibility is one great example of how the poet transforms finite to infinite through the imaginative world of poetry. Through the use of metaphors, Dickinson has shown how domestic images such as house, chambers, roof, doors and windows can be extended to infinite imaginations in the poetic world. The “fairer House” (line 2) serves as a metaphor for poetry and the “Visitors” (line 9) who are the fairest may be a metaphor for the readers of poetry.

The first four lines compare poem and prose by saying poem is more “superior” (line 4) as it has more “windows” and “doors”—suggesting that poems are subject to more flexible interpretations.

Don't use plagiarized sources. Get your custom essay on
“ Emily Dickinson and Her Social Seclusion ”
Get custom paper
NEW! smart matching with writer

The second stanza talks of how this fairer house can be extended to nature such as “Cedars” (line 5) and “the Sky” (line 8). The final stanza reveals writing poems as the speaker’s “Occupation” (line 10).

She opens the world of poetry by the “widening” of her “narrow hands”, which serves as a metaphor for the act of writing.

Wide” and “narrow” form a pair of contrast while the repetition of fairness (fairer and fairest are used in the first and last stanza respectively) reiterates that poem is fairer than prose. Dickinson has portrayed the infinite possibilities of poetry through the use of domestic imagery: from the roof of the house to the infinite sky and from the finite hands to the “Paradise” of poetry. This echoes what Wordsworth claims,

Poets choose incidents and situations from common life, and to relate or describe them, throughout, as far as possible in a selection of language really used by imagination, and at the same time, to throw over them a certain coloring aspect; whereby ordinary things should be presented to the mind in an unusual aspect.

The loose syntax of the poem and the frequent use of dashes have added to the overall flexibility and the many ‘possibilities’ the poem has: I dwell in Possibility– A fairer House than Prose–

More numerous of Windows– Superior–for Doors– Of Chambers as the Cedars– Impregnable of Eye– And for an Everlasting Roof The Gambrels of the Sky– Of Visitors–the fairest– For Occupation–This– The spreading wide my narrow Hands To gather Paradise– The myth of Dickinson’s isolation Interestingly, Dickinson’s seclusion from the society and physical “confinement” in a house is well-known (yet also often exaggerated), contrary to the free and liberal world that is depicted in her poem.

The use of the first-person singular pronoun “I” without other personal pronouns such as you in I Dwell in Possibility also seems to suggest she had no intention of gaining readership for this poem. Most of her poems were also only discovered after her death in 1886 by her young sister Lavinia. Hence, it may imply that Dickinson could be writing just for her own pleasure. Nevertheless, it should also be noted that the extent of Dickinson’s seclusion may be exaggerated as staying in the household was a common practice for women in the 19th century.

As a matter of fact, Dickinson was not deprived of social life. Her family was the pillar of the local community and their house was often used as a meeting place for distinguished visitors. According to Higginson, her mentor and literary critic, although Dickinson did feel awkward in some social situations, with her close friends and sisters she could easily indulge in innocent childlike humour.

The fact that she wrote letters to her family, schoolmates and friends also shows she was not as socially secluded as it was claimed to be. Hence, her confinement in the domestic setting did not actually inhabit her from expressing her thoughts. In fact, it might have even helped her in surmounting her surroundings to achieve personal transcendence through poetry. The seemingly familiar household objects suddenly become unfamiliar under the magic of her “narrow hands”. Just like what most of the poets do,

Dickinson had used some of the old and familiar terms in new ways such that readers (though not necessarily intended by Dickinson) inevitably have to take part in the active construction of meanings to interpret what each of the unfamiliar terms means. So why would critics exaggerate Dickinson’s seclusion? It has to do with their romantic fantasy of how a poet should look like — intelligent but arrogant, creative but reserved. It is the paradox that makes a poet a poet, the mystery that makes a poem appealing, even though they may not necessarily be realistic.

Emily Dickinson and Her Social Seclusion. (2018, Sep 16). Retrieved from https://studymoose.com/emily-dickinson-and-her-social-seclusion-essay 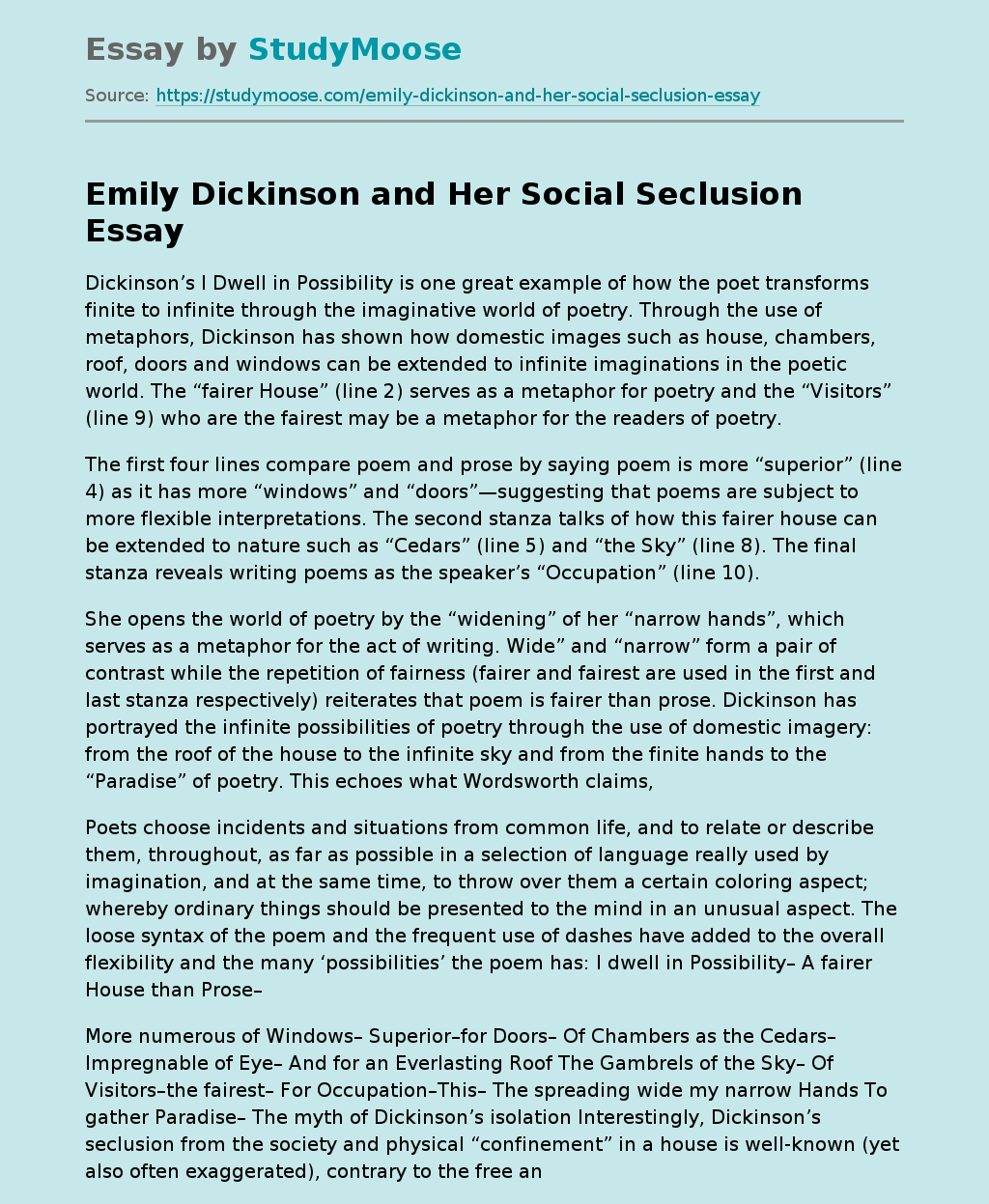