Brazil’s agricultural advantage stems from its extensive natural resources. The country’s competitors either utilize more supplies or more time in order to yield an amount that can rival Brazil’s production. Although every other country desires the agricultural production capable of Brazil, Brazil‘s government is determined to invest in industrialization in order to modernize its economy. While Brazil has a large amount of natural resources available for use, its government must provide the funding of the growing industrialization, to include: energy, materials, and increased employee earnings.

Turn in your highest-quality paper
Get a qualified writer to help you with
“ Emerging Markets: Brazil Case Study ”
Get high-quality paper
NEW! AI matching with writer

Brazil’s success in agriculture is attributed to vast lands, diverse climates, and a large population pool for labor (Brazil Agribusiness Report – Q4 2013, 2013). Without regard to its solid base in agriculture, the Brazilian government is attempting to modernize the economy through industrialization. Alongside this movement comes the “Brazil” cost: the increased operating cost of energy, raw materials, and wages. Also, in addition to paying more to industrialize, the government compensates domestic, uncompetitive industries enabling the theory of protectionism.

In response to Brazilian President Dilma Rousseff’s desires to become a world-class manufacturing base, the country can reassess its comparative advantage in agriculture and redirect resources solely to those businesses. According to Brazil Agribusiness Report – Q4 2013, its agricultural production is yielding lower than expected numbers with respect to international standards and, therefore, still has potential for growth. Alternatively, Brazil can strategize by addressing agricultural weaknesses via industrialization. First, seize the opportunity to grow and re-attack infrastructure to promote expansion and competition.

Then, allow for raised incomes, as they will decrease farmers’ debts and allow for reinvestment in the economy. Finally, although the “Brazil cost” will hurt in the short-term, a higher-paid population will result in a hygienic environment producing greater quality of products. Therefore, previously instated non-tariff barriers due to health concerns will decrease allowing for a greater degree of expansion.

Why is Brazil’s agriculture so competitive? Why do its manufacturing industries lack competitiveness? Brazil’s agriculture is competitive because its environment contains natural and inexpensive resources that other nations would have to spend extra time and money to produce or acquire. Furthermore, Brazil gained a distinctive comparative advantage in agriculture and livestock by doing away with nontariff barriers and reducing import tariffs on similar products other countries were trying to bring into the country (Brazil: Economic background, 2006). With regard to underdeveloped manufacturing industries, Brazil lacks competitiveness for the same reason its agricultural competitors fall short. The “Brazil cost” of energy, raw materials, and wages is exponential compared to another nation primed to capitalize on manufacturing. As a result, domestic industrial products are costly compared to international competitors so consumers will frequent the competitor. Why have Brazil’s governments in both the 20th and 21st century been eager to develop world-class manufacturing? According to the closing case, the Brazilian government seeks to modernize its economy through world-class manufacturing.

ON ETHICS: While President Rousseff’s critics accuse her of ignoring Brazil’s lack of comparative advantage in manufacturing, her supporters argue that her policies force Brazil to reduce its dependence on foreign-made manufacturing goods. If you were to participate in this debate, which side would you be on? I would be on the side of her supporters. Through research, I have found that Brazil has extraordinary potential to grow its agricultural sectors through industrialization. By reducing manufacturing imports and producing and employing its own industrial products, Brazil not only increases domestic income and the standard of living, but also solidifies the nation’s comparative advantage in agriculture. Although, I will say that finding the balance between directing resources towards industry versus agriculture will be a delicate quest. 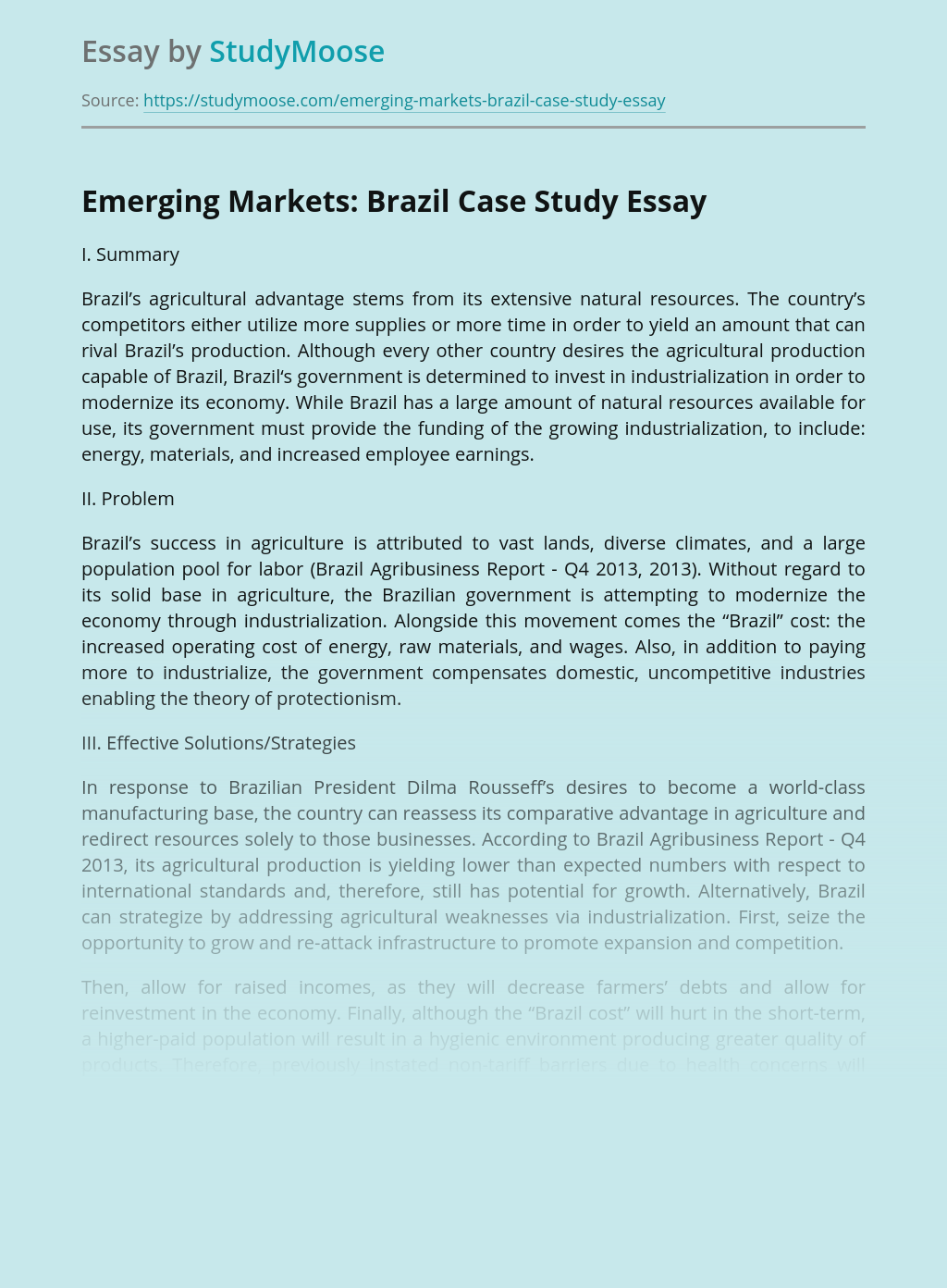 Turn in your highest-quality paper
Get a qualified writer to help you with
“ Emerging Markets: Brazil Case Study ”
Get high-quality paper
Helping students since 2015
Stay Safe, Stay Original