Ella Baker embodies the theme of strength in the face of adversity in Joanne Grant’s novel Ella Baker: Freedom Bound. Ella Baker comes from a long line of strong women who taught her to stand up for what she felt was good and right. As Ella Baker encounters racial discord in the twentieth century, she draws up on the strength of her mother, her grandmother and her aunts. She also remembers the strength that was passed down from her grandfather and uncle.

Don't use plagiarized sources. Get your custom essay on
“ Ella Baker ”
Get custom paper
NEW! smart matching with writer

As a result of her great strength she is able to teach others about nurturing equality among all people.

Ella Baker spent her adult years organizing people to fight for equality but this fight wasn’t always easy. Ella Baker was a black woman facing all the struggles that black people went through prior to and just after the Civil Rights Movement. She can be compared to Martin Luther King Jr. because of her tenaciousness and unwillingness to give up the fight.

However, Baker faced gender discrimination as well which only added to her struggles but also encouraged her to continue to use the strength that her ancestors passed down to her.

Ella Baker faced great resistance from the Southern Christian Leadership Conference headed by Martin Luther King Jr. because she was a woman and men didn’t care for taking advice from women. In this way, Ella Baker faced a fight for racial rights as well as gender rights. Ella Baker was responsible for organizing ordinary people to fight for equality.

She is credited with the Student Nonviolent Coordinating Committee (SNCC) which mobilized ordinary people to join the Civil Right fight despite the challenges that they faced.

Throughout her activist activities and numerous speeches, she urged ordinary people to find the strength to identify one thing that needed changing and work on it a little at a time. She emphasized to crowds that each person had something to give and these little bits could add up to huge changes. Ella Baker’s most important contribution to the world was her untiring dedication to the Civil Rights movement. Drawing upon the strength that her family members instilled in her gave her the power to continue the fight even when times were tough.

She was one of the pioneers of the Civil Rights Movement and Grant’s book details her great contributions. One important characteristic that gave Ella Baker so much of her strength was her ability to work towards equality without calling attention to herself. Baker didn’t focus on the work of individuals. Instead, she focused on the great things that could be accomplished when people worked together to make changes. As a result, Baker was often at odds with other (primarily male) civil rights activists because she was more focused on getting things done than reveling in the glory of accomplishment.

Grant’s inclusion of primary and secondary sources only lends to the credibility of strength that she presents in her book. African American people have relied on songs and rhymes throughout history in order to gain strength during struggles. Grant’s inclusion of several of these short songs shows just how important strength was to Ella Baker and the many avenues she used to draw upon the strength of her family members. Grant’s use of personal remembrances of Ella Baker goes further to show her character and depth of her strength in her constant battle to gain equality for all people.

If these accounts were not included in the book, the theme of strength wouldn’t be displayed as well as Grant was able to show. The use of primary and secondary sources give further evidence about the person that Ella Baker was and allow readers to gain a true picture of the kind of person that Ella Baker really was. Throughout the book, Ella Baker demonstrated her “belief in the ability of people to take control of their lives and lead themselves. ” Joanne Grant realized the importance of telling the world about Ella Baker.

Grant had first hand experience with the work of Ella Baker and the important contributions she made to the Civil Rights Movement. Grant witnessed Baker’s ability to set herself apart in order to build upon inner strength to find one’s path in life. Ella Baker was no stranger to resistance based on both her race and her gender and Grant knew that her story needed to be told so her name could be associated with the great work that was done throughout the Civil Rights Movement.

The role of black women is underrepresented in non fiction and Grant took it upon herself to share her opinion of Ella Baker with readers. Ella Baker: Freedom Bound is a book that will open the eyes of readers learning about the Civil Rights. It will show the struggle that African Americans went through to gain equality but also the struggle that women went through. Grant paints a vivid picture of the strength that Ella Baker had despite constant challenges to keep her from reaching her goals.

This book emphasizes that strength is necessary when one is fighting such an important battle. Ella Baker becomes the model of persistence through her dedication to equality and her willingness to keep fighting no matter what. She didn’t let men or white people keep her from working towards her vision of equal rights. This book is highly recommended to those who wish to gain a clear but different perspective on what it was like to be an activist during the Civil Rights Movement fighting for both racial and gender equality. 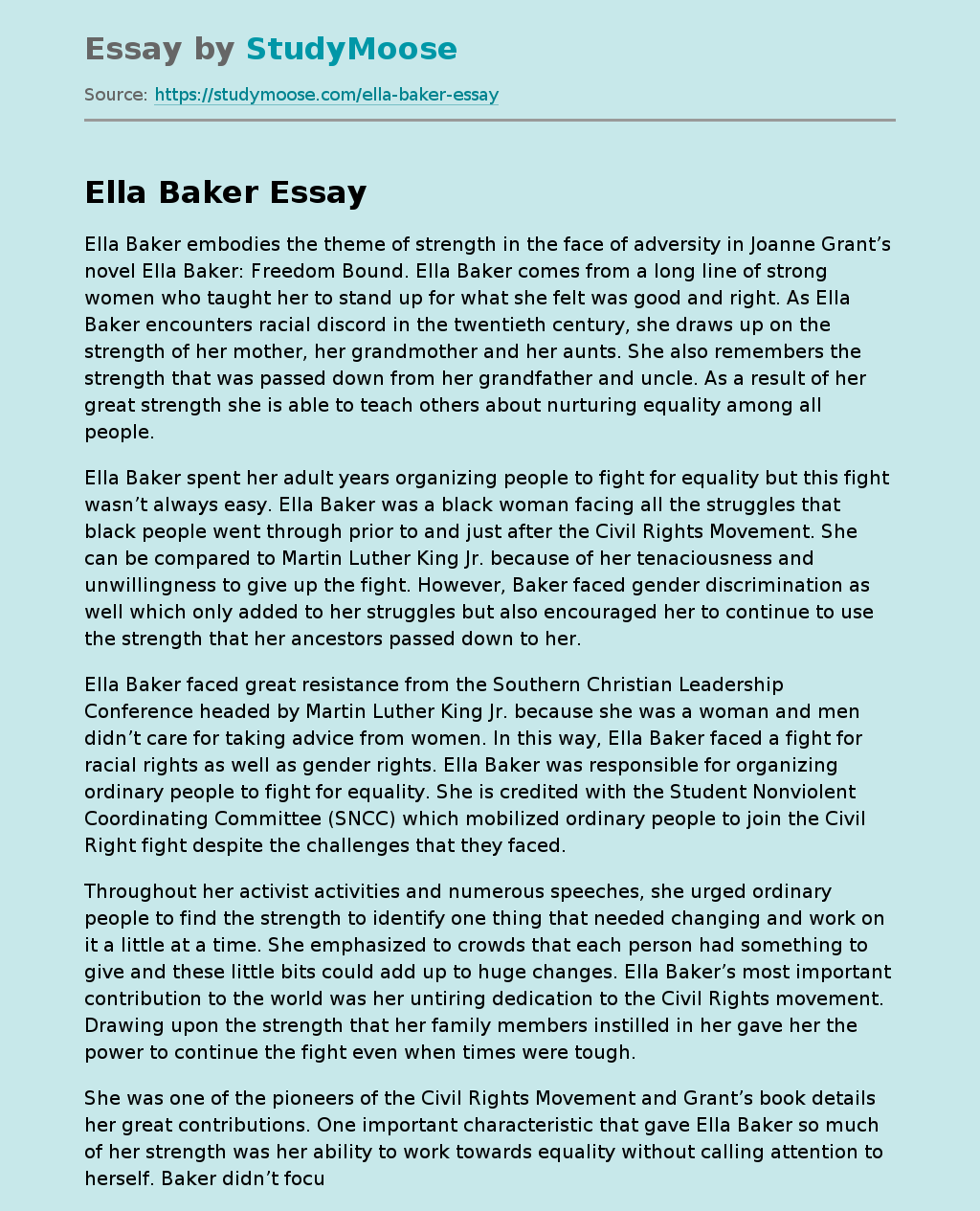