Egypt and the Nile

The ancient Egyptians were polytheistic. They believed in over one thousand gods. Ancient Egypt was a highly agricultural society. But the land received almost no rainfall annually. Thanks to the River Nile, Egyptians had a steady source of water. The seasonal floods were highly predictable and made Egypt into a major agricultural empire. Ancient Egyptians were one of the earliest civilizations to practice large scale agriculture. To properly use the river Nile, the Egyptians created their own irrigation system which helped to expand the empire.

Don't use plagiarized sources. Get your custom essay on
“ Egypt and the Nile ”
Get custom paper
NEW! smart matching with writer

As the civilization flourished, so did it’s people and culture. The Nile was inspiration for the Egyptian religion and culture. Most of the Egyptian arts follow a strict cannon. Usually the subjects of Egyptian art are Gods and Pharaohs. The Pharaohs were considered as gods themselves. The Egyptians worshipped their gods with so much passion. They believed that they could achieve immortality and be like gods themselves. Prominent Egyptians had tombs and they were embalmed.

The body was mummified and the tomb contained items that the mummy would need in the afterlife.

Some pharaohs’ tombs even contained large ships so that he could sale in the Nile for eternity. The Egyptian sunken relief of the God Horus, showcased in the Menil Collection displays the use of several different techniques used in ancient Egyptian Art. This sculpture can be compared to other Egyptian work like Ti’s hunt and also to the Greek cannon for building sculptures. The description reads “The Beautiful Horus, The great god, Lord of Heaven; one who is foremost in Bahet [possibly Edfu].

” This relief sculpture is presented by combining both frontal and profile view of Horus.

Most of the Egyptian arts created are in sunken relief. Usually the subjects of Egyptian art are Gods and Pharaohs. The Egyptians worshipped their gods with so much passion. “Egyptian artists regularly ignored the endless variations in the body types of real human beings. Painters and sculptors did not sketch their subjects from life but applied a strict cannon, or system of proportions, to the human figure” (Kleiner, 64). This method of drawing lasted for centuries. Before drawing anything the Egyptians drew a grid on the wall.

Then specific human body parts were placed in each of the squares. The height of the subject is already pre-determined. The Sculpture of Horus, from the Menil collection is dated to be from 1320 to 1200 BC. The 19th dynasty was in control during 1320 to 1200 B. C. The ancient Egyptians feared and adored their gods. They built huge temples and monuments to praise their gods. They aspired to become like their gods. The Egyptians wanted to become immortal. This is why there is the embalming process when someone is buried. The statues built in burial chambers were for this reason. The artist’s aim was not to portray living figures, but to suggest the timeless nature of the stone statue that was designed to provide an eternal substitute home for the ka” (Kleiner, 63). A look at scroll of Hu- Nefer illustrates what the Egyptians believed what would happen to a dead person’s soul. “At the left, Anubis, the jackal-headed god of embalming, leads Hu- Nefer into the hall of judgment. The god then adjusts the scales to weigh the dead man’s heart against the feather of the goddess Maat, protectress of truth and right.

A hybrid crocodile-hippopotamus-lion monster, Ammit devourer of the sinful, awaits the decision of the scales. If the weighing had been unfavorable to the deceased, the monster would have eaten his heart. The ibis-headed god Thoth records the proceedings. Above, the gods of the Egyptian pantheon are arranged as witnesses while Hu- Nefer kneels in adoration before them. Having been justified by the scales, Hu-Nefer is brought by Osiris son, the falcon headed god Horus, into the presence of the green faced Osiris and his sisters Isis and Nephthys to receive the award of eternal life” (Kleiner, 77).

All of the Egyptian art followed the Egyptian cannon. Even the sculptures followed this method. The statues of Pharaohs were rigid structures. The Pharaoh were all known to be patrons of art and built many monuments to please the gods. The sculpture of Horus was probably created for worshipping purposes too. Looking at the sphinxes can show us the further connection the ancient Egyptians had with the animals. The sphinx is a statue that has the body of a lion and the head of a human being. This could mean that The Egyptians thought that human beings had the power to be beastlike and have the mind ability of a god.

Looking at almost any of the artwork representing Egyptian gods, one can observe the deep connection Egyptians had with animals. The jackal was a representation of the god Anubis. Scholars believe that the jackal was associated with Anubis was because Anubis is the god that opens the road to the afterlife, and jackals were seen to be roaming around the tombs and deserts. Almost every god that was worshiped was represented by an animal and these animals characteristics were then attributed to the god. Ancient Egypt was a place filled with culture.

The Nile River played a major role in building this civilization. With the Niles help, Egypt was able to flourish and become a large empire. Ancient Egyptian religion played a huge role in the making of the Egyptian art. Most of the art from this era was depiction of gods and pharaohs. The sunken relief of Horus shows the cannon used by ancient Egyptian artists. Egyptian culture and gods had a large impact on the artwork created during this era and the same culture dominated the area for several hundred years. Reference Kleiner,Fred. Gardner’s Art Through the Ages. Boston: Wadsworth, 2011. Print.

Egypt and the Nile. (2018, Sep 17). Retrieved from http://studymoose.com/egypt-and-the-nile-essay 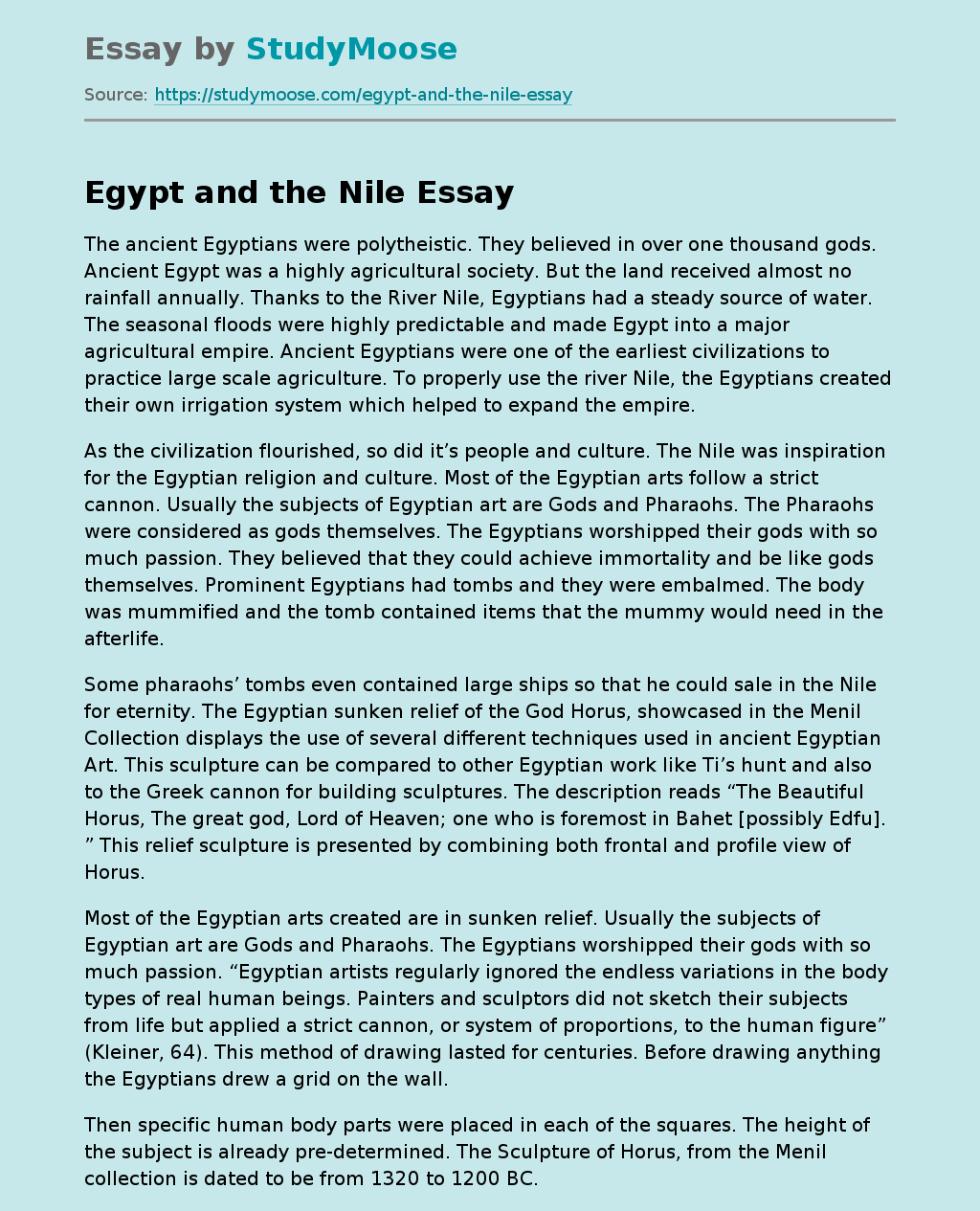