The Shang Period of China (1750-1045 B.C.E.) and the Egyptian Culture (3100-1070 B.C.E.) were separated by thousands of years and developed in totally different regions, yet share some interesting similarities in culture, religion, government, politics, social structure and migration. They were both tomb builders with a highly organized social structure governed by a central ruler with a large army, but the Egyptian civilization is considered to have been far more advanced in the development of their culture.

Turn in your highest-quality paper
Get a qualified writer to help you with
“ Shang China VS. Ancient Egypt ”
Get high-quality paper
NEW! AI matching with writer

The natural borders of both societies allowed for them to develop independently which makes their similarities more interesting.

The Shang Period of China and the Egyptian culture shared many advancements in common. They both domesticated animals and crops that supported large populations, developed bronze weapons, chariots, bows, and large well-organized armies, as well as the use of a written language. They also shared a common belief in tomb building for their rulers and placed objects in Tombs for use in the afterlife.

Religion was very important in both cultures. Both groups had different beliefs and gods but were similar in how they managed religion. The Egyptians and Chinese of the Shang period believed in ancestor worship, an after-life, and had many gods.

However they both had central gods that were the most important. In the Shang period, the supreme god was Shang Ti, the “lord on high”. The god could not be approached directly but reached through the ruler’s ancestors. The Ruler was the link between heaven and earth. The Egyptians had more than one important god ,but they lived under the rule of their living god, Pharaoh. Pharaoh was the divine ruler come to earth to ensure the welfare and prosperity of the people.

One common aspect of both cultures was a central government with one authoritarian ruler. Early Egypt had small states ruled by local kings, but eventually ruled under one Pharaoh around 3100 B.C. The Egyptian ruler governed as a divine king. Both Shang and Egyptian rulers headed a large, well-organized army.

The Shang society was composed mostly of many peasant communities that were dominated by a strong noble class and headed by a organized monarchy. The Shang King had an elite warrior aristocracy, then priest, merchants and farmers followed by the peasants. Similarly, the Egyptian Pharaoh had high ranking officials, then lower level officials, local leaders and priest, well-off farmers, with peasants at the bottom of the social ranking. In both societies, funeral rites helped define the social class. Royalty were buried in elaborate tombs, while peasants were buried without much ceremony. The Egyptians were far advanced in burial rites and developed mummification to preserve the bodies of the social elite. Within their social structures, the two societies had similar armies and methods of war. Both armies were large and very organized. They both used horse drawn chariots, bronze weapons, and bows.

The geography of China provided isolation and little migration in and out of the region by outsiders for much of China’s early history. Chinas’ natural borders of steep mountains, seas/oceans protected the ancient Chinese cultures. The Egyptian geography also helped keep it somewhat isolated because it is mostly barren desert with narrow green fertile land on both sides of the Nile river and delta. It too has a sea on one side. However, the Nile did allow the Egyptians to trade with other cultures and eventually invaders came into Egypt from the sea.

You would be correct to say that the civilizations of the ancient Chinese and Egyptians could not be further apart in geography and appearance. However, they developed two societies that shared many similar ideas. Their common belief in ancestor worship and a similar social structure are just a couple of the shared ideas of the two groups. The differences become more apparent in the advancement of the Egyptian culture. Even though their population was smaller, the Egyptians were better builders, had a more advanced language structure, and their monuments, tombs and artwork left a lasting impression on the world. 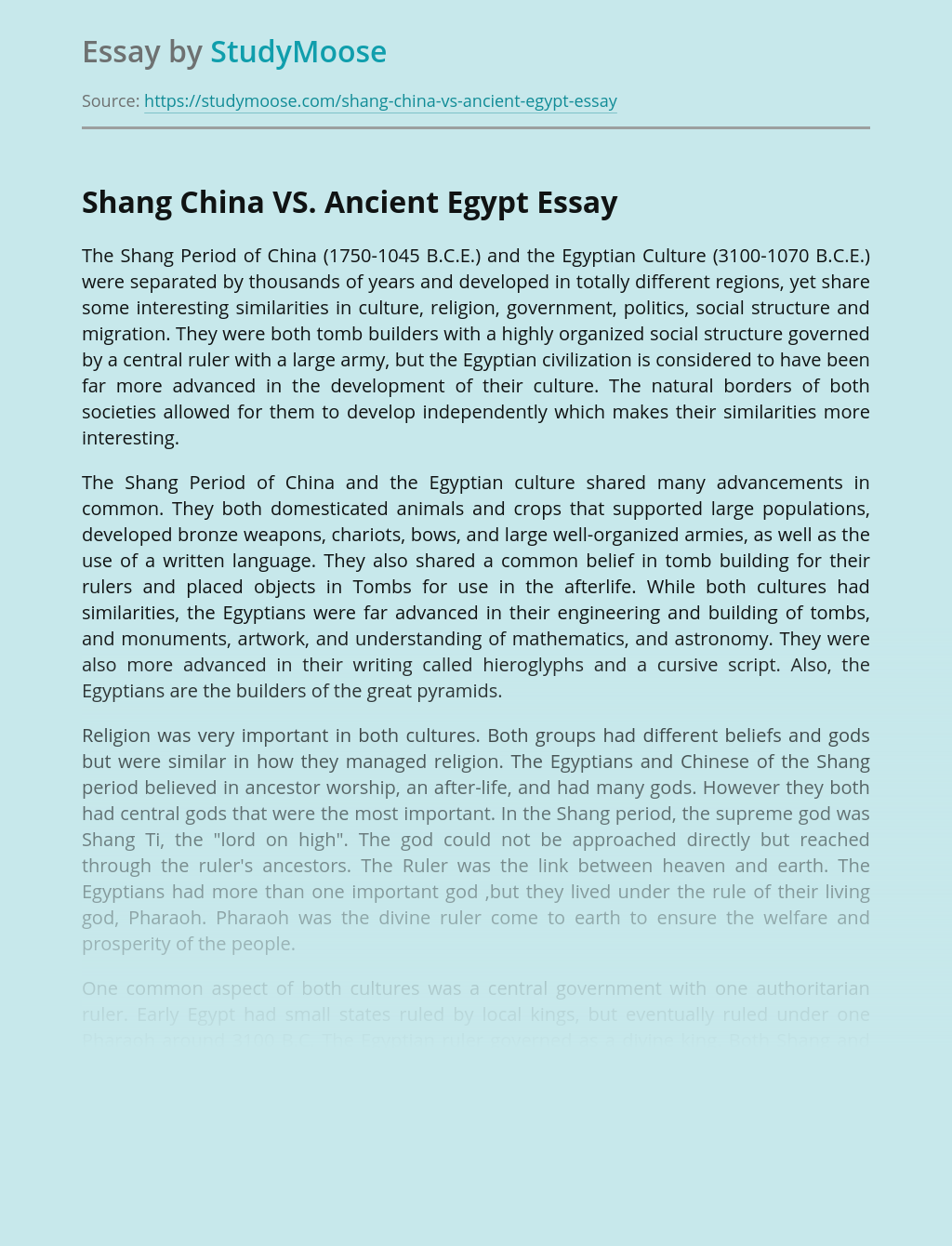 Turn in your highest-quality paper
Get a qualified writer to help you with
“ Shang China VS. Ancient Egypt ”
Get high-quality paper
Helping students since 2015
Stay Safe, Stay Original