A mummy can be defined as either the body of a person or animal that has undergone the process of preservation after death. In ancient Egypt religious beliefs it was inevitable for the human body to be preserved and this involved the process of artificial preservation simply known as mummification. The mummification process was very complex and length as it could take almost seventy days to be accomplished. Any Egyptian could be a mummy as long as he or she was able to meet the payment as the process of preserving their bodies for the afterlife was immensely expensive.

Don't use plagiarized sources. Get your custom essay on
“ Egyptian Mummies ”
Get custom paper
NEW! smart matching with writer

Ancient Egyptians believed that there was life after death and this prompted them to preserve their bodies for use in the afterlife. Afterlife according to Egyptians entailed a journey after ones death to another world where the dead would lead a new life. Egyptians buried their dead with all their earthly possessions believing that they would need all those things they had used when they were alive, (Bob, 1994).

Rich Egyptians had to pay huge amount of money for their bodies to be properly preserved.

The unlucky Egyptians who represented the poor had to be buried in the sand while their rich counterparts were buried in the tomb as they could afford the expensive mummification of their bodies. As earlier said mummification process lasts seventy days, and the process involved special priests working as embalmers, treating and wrapping the body. Besides having knowledge about the correct rituals and prayers to be conducted at various stages, it was imperative for the priests to also have a detailed knowledge of human anatomy.

The initial stage of mummification process involved the removal of all internal parts that are subject to rapid decay. The brain was carefully removed through insertion of special hooked instruments up the nostrils and this facilitated the pulling out of bits of brain tissue. The process was very delicate as it could easily disfigure the dead person’s face. After removing brain, the embalmers then remove the organs of the abdomen and chest and this was through a cut on the left side of the abdomen.

The only organ that was left untouched was the heart which they believed was very vital as it signified a person’s being and intelligence, , (Bob, 1994). The removed organs were preserved separately in special boxes called canopic jars buried together with the mummy. Nonetheless, in later mummies, the organs were removed, treated, wrapped and then returned back into the mummies’ bodies.

The embalmers then removed all moisture from the body and this was done by covering it with natron, considered to be a salt with great drying properties. After a complete drying of the body, the embalmers washed lightly the natron off the body resulting to a dried out recognizable human form. To make the mummy have more life-like, linen and other materials were inserted in the sunken areas of the body and false eyes were also added. The mummy was considered complete after wrapping it with hundreds of yards of linen.

The wrapping of body which was done by the priests involved winding up of long strips of linen around the body and to protect the dead from mishap, amulets had to be placed among the wrappings integrated with prayers and magical words inscribed on some of the linen strips. In a nutshell ancient writers, modern scientists and mummies have proved to be helpful in bringing to our understanding the Egyptian mummification process and the culture that existed with it. Reference Bob, B. (1994). Egyptian Mummies: Unraveling the Secrets of an Ancient Art. New York: William Morrow and Company, Inc. 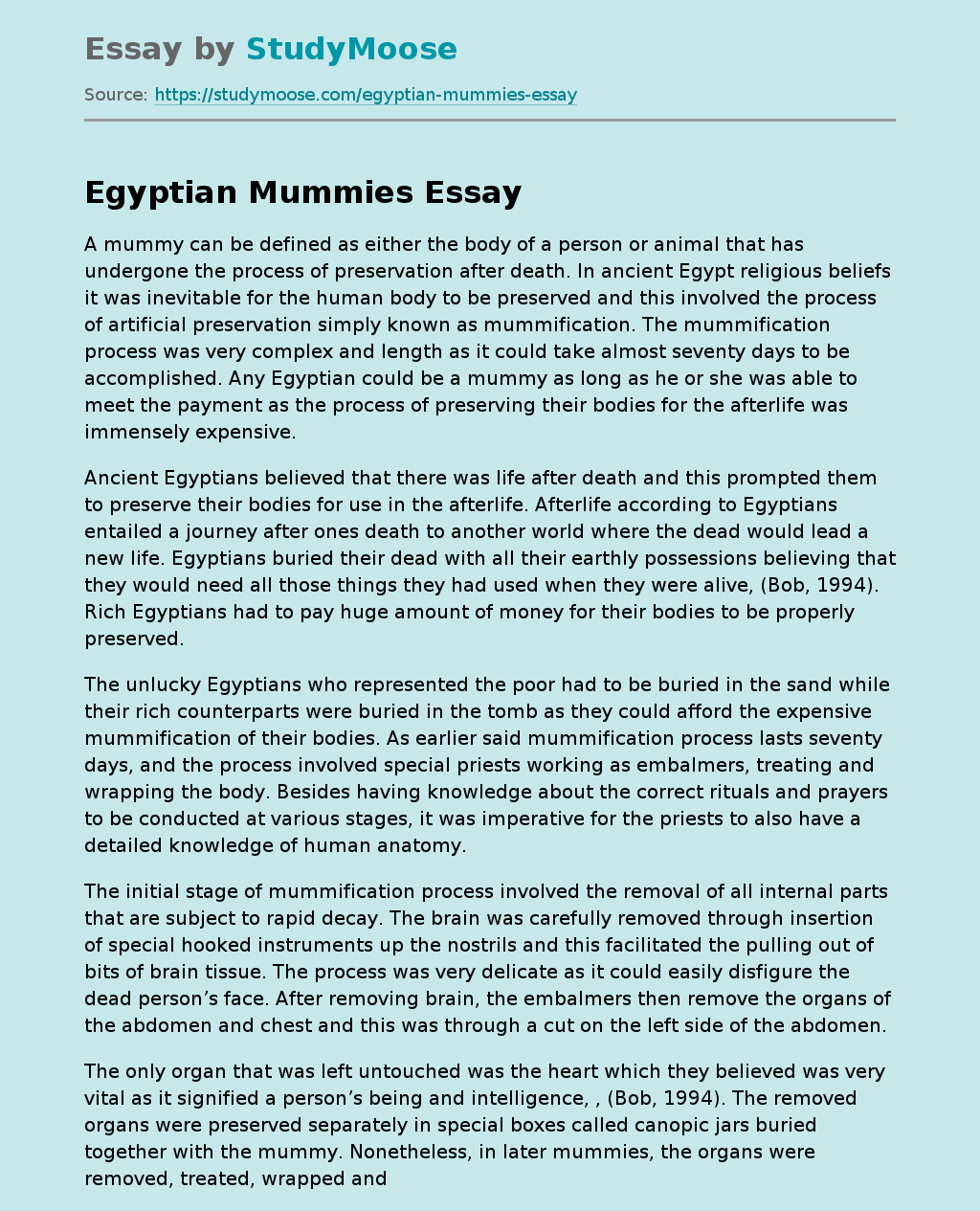