Psychological Effects of Unemployment and Underemployment
The current state of the economy continues to be an enormous stressor for Americans, with 78 percent reporting money as a significant source of stress (APA, 2009). Unemployed workers are twice as likely as their employed counterparts to experience psychological problems such as depression, anxiety, psychosomatic symptoms, low subjective well-being and poor self-esteem (Paul & Moser, 2009). Like unemployment, underemployment (e.g., people working part-time because they cannot find full-time employment) is unequally distributed across the U.S. population, with women, younger workers and African Americans reporting higher rates of involuntary part-time employment and low pay, as well as higher proportions of “discouraged” workers who have given up on searching for a job (McKee-Ryan et al., 2005). Unemployment not only affects those who lose their jobs. Coworkers who are still employed may experience a heavier work load and suffer from anxiety that they too will soon be unemployed, (Kivimaki, Vahtera, Elovainio, Pentti, & Virtanen, 2003). Unemployment and underemployment also affect families and communities.

Effects on Families
According to the Society for the Psychological Study of Social Issues’ Policy Statement “The Psychological Consequences of Unemployment,” the stress of unemployment can lead to declines in individual and family well-being (Belle & Bullock, 2011). The burden of unemployment can also affect outcomes for children. The stress and depressive symptoms associated with job loss can negatively affect parenting practices such as increasing punitive and arbitrary punishment (McLoyd, 1998). As a result, children report more distress and depressive symptoms. Depression in children and adolescents is linked to multiple negative outcomes, including academic problems, substance abuse, high-risk sexual behavior, physical health problems, impaired social relationships and increased risk of suicide (Birmaher et al.

Unemployment and Stress in Different Populations
Unemployment does not affect all groups equally. Rates are higher among Latinos/as (13.1%) and African Americans (15.7%) than European Americans (9.5%). Immigrants (Kochhar, 2009) and people with disabilities (Shapiro, 2009) are also especially vulnerable to layoffs as are those without college degrees (Leonhardt, 2009). Unemployed women report poorer mental health and lower life satisfaction than unemployed men (McKee-Ryan et al., 2005). Women are more likely to report that they have consumed unhealthy foods, or skipped a meal as a result of stress. Women are also more likely to report physical symptoms of stress, including irritability, anger, fatigue and lack of interest or motivation and energy (APA, 2009). In combination with other health disparities, the unequal impact of unemployment on some groups may have devastating effects on already vulnerable communities. ————————————————-

The commission would examine issues of economic and psychological insecurity within our workforce due to employment displacement. Furthermore, the commission would provide recommendations to Congress and the President on how to reduce economic and psychological effects of unemployment. Fund job training and reemployment programs that take into account the psychological and emotional needs of workers and help prevent long-term unemployment. For example, the Michigan Prevention Research Center (MPRC), a program funded for 20 years by the National Institute for Mental Health, developed and evaluated the JOBS Program to help unemployed workers effectively seek reemployment and cope with the multiple challenges and stressors associated with unemployment and job-searching. Currently supported by the Substance Abuse and Mental Health Services Administration, the JOBS Program is a group-based intervention that has the dual goals of promoting reemployment and enhancing the coping capacities of unemployed workers and their families. Reauthorize and expand the Temporary Assistance for Needy Families program to provide temporary assistance to the long-term unemployed. APA supports more federal support for increased benefit levels for States, more time for clients to access mental health services, and suspending the work first requirement, to encourage training and education. 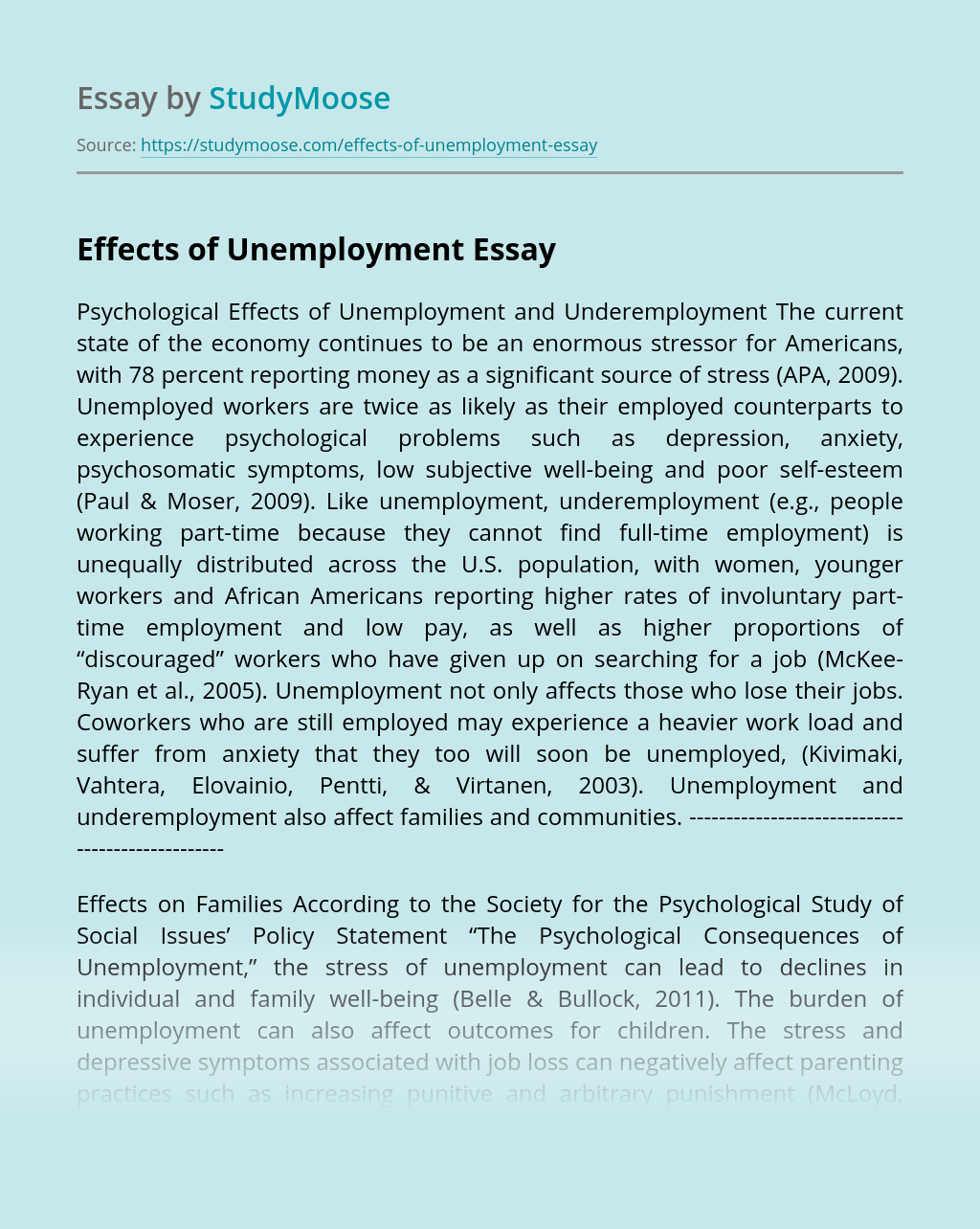 Turn in your highest-quality paper
Get a qualified writer to help you with
“ Effects of Unemployment ”
Get high-quality paper
Helping students since 2015
Stay Safe, Stay Original