Effects of Social Media on Society

The American culture is deteriorating drastically due to the use of social media. Facebook, Twitter, and Instagram are some of the few trendy social media platforms that are slowly developing from a way to connect with others, into a complete obsession that is affecting many people in different aspects of their lives. Regular social media users tend to lose roots with their identity, they are often exposed to the degradation of different cultures, and they compare their relationships to others.

Social media is becoming a routine in the daily lives of individuals, and, due to this, one will lose their identity after being exposed to such unrealistic expectations.

Don't use plagiarized sources. Get your custom essay on
“ Effects of Social Media on Society ”
Get custom paper
NEW! smart matching with writer

There are many factors that define one’s identity such as qualities, beliefs, personality, and looks. Due to social media, these factors are altering an individual’s identity in a negative aspect, resulting in the loss of who they truly are. Social media users are changing the way their appearance and what the post to fit in.

In today’s society, many teens search for the most likes, comments, and shares, rather than searching for hobbies to occupy time. The users are busy trying to become the instagram perfect user, that they forget to look back and spend time to get to know what makes them truly happy. This standard has led people to alter their looks based on acceptance, popularity, status, thus losing who they are as an individual. Social media was once something an individual would look at as a fun way to pass time, but now it negatively affects the social behavior and norms found in human identity.

Social media is a platform for networking and connecting, however as this form of communication has evolved, it acts as a negative factor that disrupts one’s culture due to the amount of independence and freedom it allows any individual. People tend to share, post, and retweet whatever they want on social media because there are not many limits that they are faced with which, to an extreme, can lead to explicit comments or pictures being posted. Social media provides a leeway for individuals to abuse their freedom of speech by arguing about one another’s mindset on race, religion, and political views. For example on Twitter, Donald Trump, has been tweeting content that is arguable among political groups. His tweets are offensive to the political parties that are not republican. Since the President of The United States is allowed to abuse his power, it gives an automatic justification that if someone famous is able to express offensive comments then why can’t everyone else. Also on Facebook, users think it is okay to post a video of a girl getting her hijab ripped off. Posts like this cause a huge ruckus on social media and offend different minority groups. This may cause many controversial topics to resurface, which, as a result, can introduce a plethora of unsuitable content to the youth. The youth are constantly exposed by inappropriate content because of how easy it is to express explicit material on social media. Social media was made with the intention for networking and connecting with others, however it now plays a completely different role in people’s lives.

The term social media has become very misleading because although people believe that they are “socializing”, they are not being social at all. This extreme usage of social media causes for there to be a decrease in human interaction which causes isolation from the real world. When walking into a restaurant, almost 80% of the people there are looking at a device. People tend to focus more on what is on their phone rather than what is in front of them; this results in people focusing on taking photos and posting, instead of living in the moment and getting the actual experience. This contributes to the isolation of others and loss of human touch. Those who are popular on social media, avoid verbal communication and human interaction. Active social media users envy their “followers” for having more favorites than them, so the users try to go out of their way and put on a false facade to gain more popularity. For example, couples try to copy the perfect social media couple, so they ignore each other’s presence and focus mainly on taking the “perfect” pictures. Social media was designed to enhance relationships and let others catch up from old friends, but is now used to replicate the standard relationship.

Social media, as a whole, has completely transformed the identity, culture, and relationships of the active users. The rapid advancement of technology led to social media becoming the main source of communication. However, social media has negatively impacted society. The development of social media was used to help connect users, but when abused, the effects are appalling.

Effects of Social Media on Society. (2021, Apr 20). Retrieved from http://studymoose.com/effects-of-social-media-on-society-essay 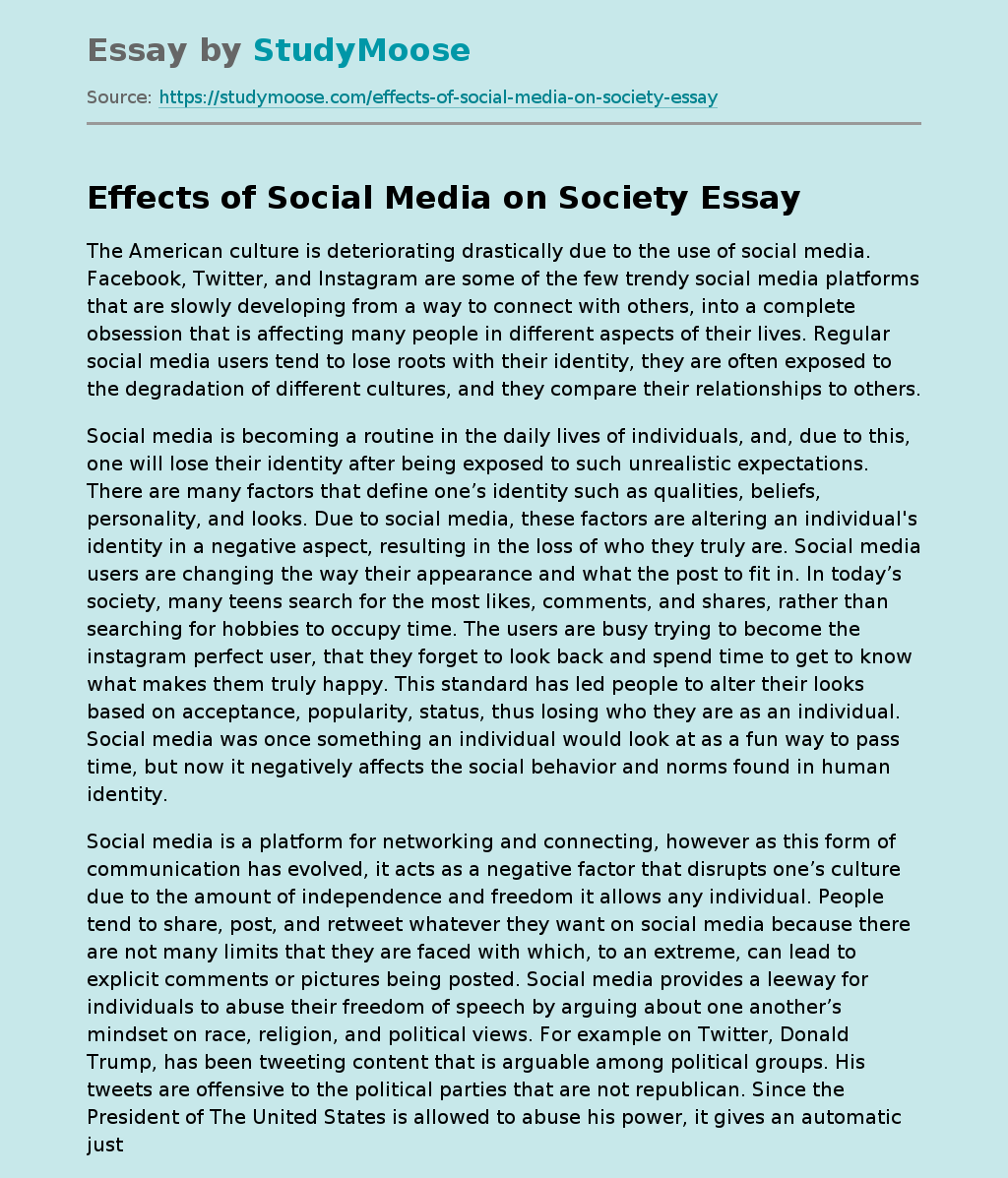