Effects Of Media On Globalization

Media and globalization go hand in hand. Although researchers in both fields may have divergent views on the extent of influence of each on the other, it is evident that the two have a correlation and will always be in tandem. Terhi Rantanen acknowledges that media and globalization are closely interlinked. Whereas most communication scholars focus the role of media in the process of globalization they are opposed to media being relegated to a socio-cultural study. They think media affects all arenas globalization including politics and economics.

Don't use plagiarized sources.
Get Your Custom Essay on Effects Of Media On Globalization Just from $13,9/Page

– Modifications in language of media.

– Innovation and increased use of new media

– A closer relationship and shared culture by people from different continents

Media in Britain has had to adapt different languages to attract a new international audience. Globalization from a business perspective means leaving one’s country and selling one’s goods and services to another country. Therefore, it follows that one has to adjust to the national language of the people so as to trade.

Media is a commercial venture like any other and making profit is the end goal. The audience reach, response and retention have to be massive to realize any benefits, monetary or otherwise. Evidently, the globe is the largest untapped market for British media. To maximise on this new frontier, one has to know and effectively apply the correct vocabulary, intonations and other aspects of language to capture and retain their attention of the prospective audience in a foreign country. The world has 6,912 living languages.

It would be impossible to broadcast in all languages but a media institution that broadcasts or prints its information in the major and popular languages of the world has an advantage over a rival entity that only does so in English. Take an example of BBC World Service, the leading international broadcaster that broadcasts in 33 languages including Urdu, Swahili, Chinese, French, Shona, Spanish etc. Why does it do so? It diffuses its message in all these other languages because of globalization. BBC no longer appertains to the British.

It is now an intercontinental brand name. Consequently, to boost the audience numbers, the national broadcaster has to present programs which non English speakers can also understand. BBC’s purpose for existence is ‘to enrich people lives with programmes and services that inform, educate and entertain,’ Indeed, if BBC had not started broadcasting 75 years ago in other languages, today it would not be the leading international broadcaster that it claims to be nor would have such universal brand recognition.

Globalization has provoked the creation of new production for new media. As the labour costs and other production costs in the West including Britain rise to unprecedented heights, manufacturers of new media apparatus such as computer chips and other components are relocating their business to cheaper assemblage destinations. According to Lievrouw et al. new media is not only the content but also the infrastructure that supports production, distribution and exhibition of this content.

They emphasize that institution of satellite broadcasting and telecommunication networks which sustain the seamless content supply, actively supports the globalization of new media. Also these networks encourage the international growth of local, regional and global markets. ‘Communication and new media systems have supported the expansion of business beyond national markets to a system whereby components are developed, manufactured, assembled, and sold far from where corporations (Transnational) exercise control.

In short, globalization has encouraged advancement of communications technologies thus improving the quality and quantity of intercontinental information and commerce which has encouraged further globalization. This endless cycle has led to opening of factories in developing countries which benefit from the new income. The British Media has increased the coverage and space of international issues. They are running more in depth programs and writing feature articles on events taking part in other parts of the world.

For instance, at the beginning of this year violence broke out in a tiny East Africa country called Kenya that was once a former colony of Britain. During this period Sky Broadcasting Corporation, British Broadcasting Corporation(BBC), the Daily Mail and The Guardian gave us blow by blow accounts of the breaking news. Why did they give so much time to such a story from a far off state? Well, Kenya was of great strategic to Britain. Britons have business interests and some have family members residing there. The world was really compressed because this chaos taking place in Kenya was part of their reality as well.

Globalization has affected how Britons and the media understand the world. As the media advances and increases in complexity it is not enough to just listen, watch or read the news. Britons want more than just excerpts. The news, especially international news, are analysed; experts are summoned; explanations and predictions are made. Reuters diffuses political, economic and social news in over 23 languages through its wire services. This information comes complete with historical backgrounds and expert opinion.

Globalization has in fact led to Vilanilam writes ‘Reuters main business is not simply transmitting news of daily political events it also supplies the media with news of financial transactions worldwide. . . . In short, the world’s financial transactions and their impact on the immediate and long term interests of its allies are of primary concern to Reuters. ’ Therefore because British media also has an interest in the global information, it has to reinvent itself and broaden its perspective so that it can keep with an audience that has increased consciousness of world around them.

Bryn et al describe globalization as a schoolboy who listens in India who eats American cereal, listens to a Canadian pop singer is a schoolboy on a Japanese manufactured MP3 player, wears American Jeans , converses to his parents in Hindi, and goes for English language classes. This phenomenon has indeed has linked between people of different land masses together and in this same way it has helped to propel brand names from western countries to developing countries in the southern and eastern part of the hemisphere. How has it affected media in Britain?

The media has played a part in this process and has benefited through transmission of adverts to foreign countries. British Media has extended its programming and publications to the other side of the globe. The Indian boy would get know all this brand names and the MP3 because he saw it in Sky International or BBC Click program. The media in Britain is enhancing the homogeneity of people with different racial, ethnic and political affiliations already began by the process of globalization. Hence, globalization and media have a symbiotic relationship

The globalization trend has led to the rise of so called new media in Britain. Bill Jones says that, ‘By 2005, nearly 36 million people or nearly 60% of UK homes, have a PC . . . . ‘ . Globalization has forced Britons to modernize the way they access information. They no longer rely on the old media such as television and radio or newspapers. Nowadays Britons are spending more time at watching news, reading newspapers on the Internet. This is because globalization means that business, politics; society in general has gone global. To keep on top of what the trends, one has to have the fastest media available.

The Web contains more information than any source of media. It can be portable and one does not have to be in a fixed place to access the precious information necessary for survival. Apart from the PCs Britons have Ipods to download music from their favourite international artists, MP3 players to watch their favourite UEFA club match. Globalization has brought economic growth to the media industry in terms of the massive annual incomes derived by companies who endeavour to globalize. O’Loughlin et al explain how there are now new entities called ‘transnational’ media corporations which extend beyond Britain.

He gives an example of NewsCorp owned by Rupert Murdoch who has multi-million dollar interests in Asia and Britain. These corporations create job opportunities for media practitioners in Britain. This new media market is almost a trillion dollar industry in Britain and it will continue to grow. In conclusion, globalization has changed the media for the better and with time the face of media in Britain will have a different appearance because of influence from globalization. Consequently, globalization and media in Britain are ultimately and inextricable interconnected and symbiotic.

Effects Of Media On Globalization. (2017, Feb 06). Retrieved from https://studymoose.com/effects-of-media-on-globalization-essay 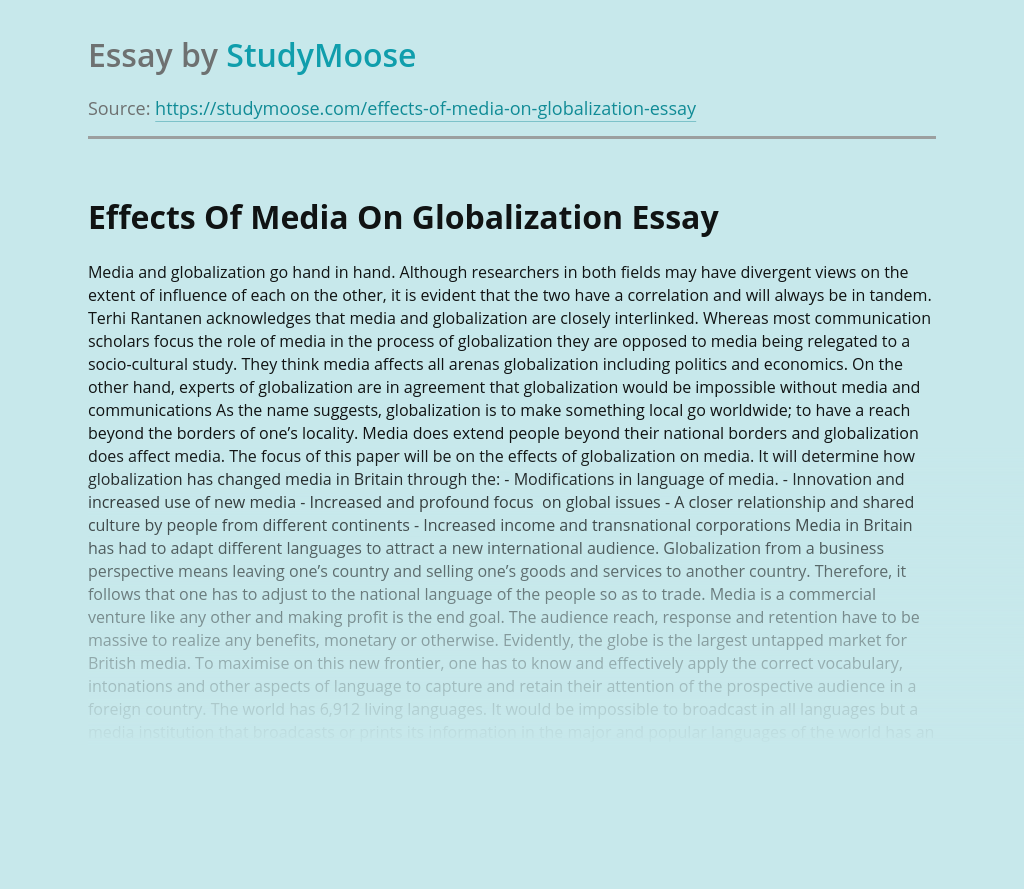 The Globalization of Starbucks

Thirty years ago, Starbucks was a single store in Seattle’s Pike Place Market selling premium-roasted coffee. Today it is a global roaster and retailer of coffee with some 17,000 stores, 40% of which are in 50 countries outside the United States. Starbucks set out on its current course in the 1980s when the company’s director...

Explain the need for an MNC to “be global and act local.” How can a firm design its organization to enable this In today’s business environment, globalization opens doors to new opportunities. More and more companies are going global, but not all companies are getting enough advantage of going global. Reason being, many firms are...

Get Essay
Globalization in the Music industry

The music industry has been around for over two centuries (PBS). Its volatility can be measured by its ability to shift and change according to its time period, the technologies that arise through the ages and the public’s shift in musical taste. The music industry is comprised of many different components, organizations and individuals that...

How Does Globalization Impact Consumers?

How does globalization impact consumers? This question has been highly debated by economists. Some believe consumers will be negatively affected by globalization with greater economic instability and multiple financial crisis’ while corporations receive record profits. Other experts are of the opinion that globalization will provide customers with more wealth, more goods at lower costs, and...

1: Educating workers around the world: Due to globalization, managers and employees of hospitality industry are able to learn about the different cultures, people, religions and other different prospects of life. Globalization also helps them to understand what importance of humanity is. Racism is still a part of some people but due to globalization it...