Facebook can be very dangerous for the lives of teens. Many teens of today say that Facebook is positive because it can improve communication between other teens, which is true, but the real stated facts about the site are that Facebook can cause psychological disorders, depression, and can affect grades in a negative way. Facebook can cause many psychological disorders. Two of the major disorders that are caused by Facebook are narcissism and anxiety. Narcissism is inordinate fascination with oneself.

Narcissism can also negatively affect learning and grades for teens.

Don't use plagiarized sources. Get your custom essay on
“ Effects of Facebook on Teens ”
Get custom paper
NEW! smart matching with writer

Teens who use Facebook more often show more narcissistic tendencies while young adults who have a strong Facebook presence show more signs of other psychological disorders, including antisocial behaviors, mania, and aggressive tendencies. ” (Albanesius) Narcissism is one problem that can be prevented if teens knew how to use Facebook in moderation instead of constantly using it every day. Another disorder caused by Facebook is anxiety. Anxiety is distress or uneasiness in the mind that is usually caused by fear of danger or possible misfortune.

Anxiety can be caused by pictures, status updates, or even through messaging each other. Teens can also try to prevent anxiety by cutting down on their daily Facebook usage. Along with anxiety, depression can also be influenced by Facebook. Depression is being in a deep sadness where you think that nothing good is ever going to happen to you. Depression is another major disorder that is caused by excessive Facebook use. “With in-your-face friends’ tallies, status updates and photos of happy-looking people having great times, Facebook pages can make some children feel even worse if they think they don’t measure up.

This could be prevented though if teens could cut down on the amount of time they spend on Facebook. “Facebook can be distracting and can negatively impact learning. Studies found that middle school, high school and college students who checked Facebook at least once during a 15-minute study period achieved lower grades. ” (Daily 1) Facebook can negatively impact learning because teens could spend their time on the computer checking Facebook instead of studying and doing homework.

Teens that spend more time on Facebook usually have lower grades than teens that control how much time they have on Facebook and how much time they study for. These teens have lower grades because they waste all their time on Facebook instead of studying. Teens are now checking Facebook during school hours which takes their attention away from learning and focusing on their education. However, some parts of society believe that Facebook improves communication skills of teens. Facebook can definitely improve communication between teens.

Communication through Facebook improves the social part of a teen’s life. This can be achieved through posts on each other’s wall and they can also communicate through messages. Messages can help teens connect and could also help teens make new friends. The teens could start talking to other teens on Facebook which helps them make new friends through the chat portion of Facebook. Communication is improved because of the many applications on Facebook. Teens can connect through applications on Facebook, such as Words with Friends.

Teens can improve their communication through apps because they can play against each other which help them connect through Facebook. This is a positive effect of Facebook that support that Facebook can positively affect teens. Facebook is a social networking site that has limited positive features for teens but overall it has many negative effects on the teens of today. Facebook can help improve communication between teens, however, Facebook can cause psychological disorders, depression, and the website can affect grades in a negative way.

Effects of Facebook on Teens. (2016, Sep 27). Retrieved from https://studymoose.com/effects-of-facebook-on-teens-essay 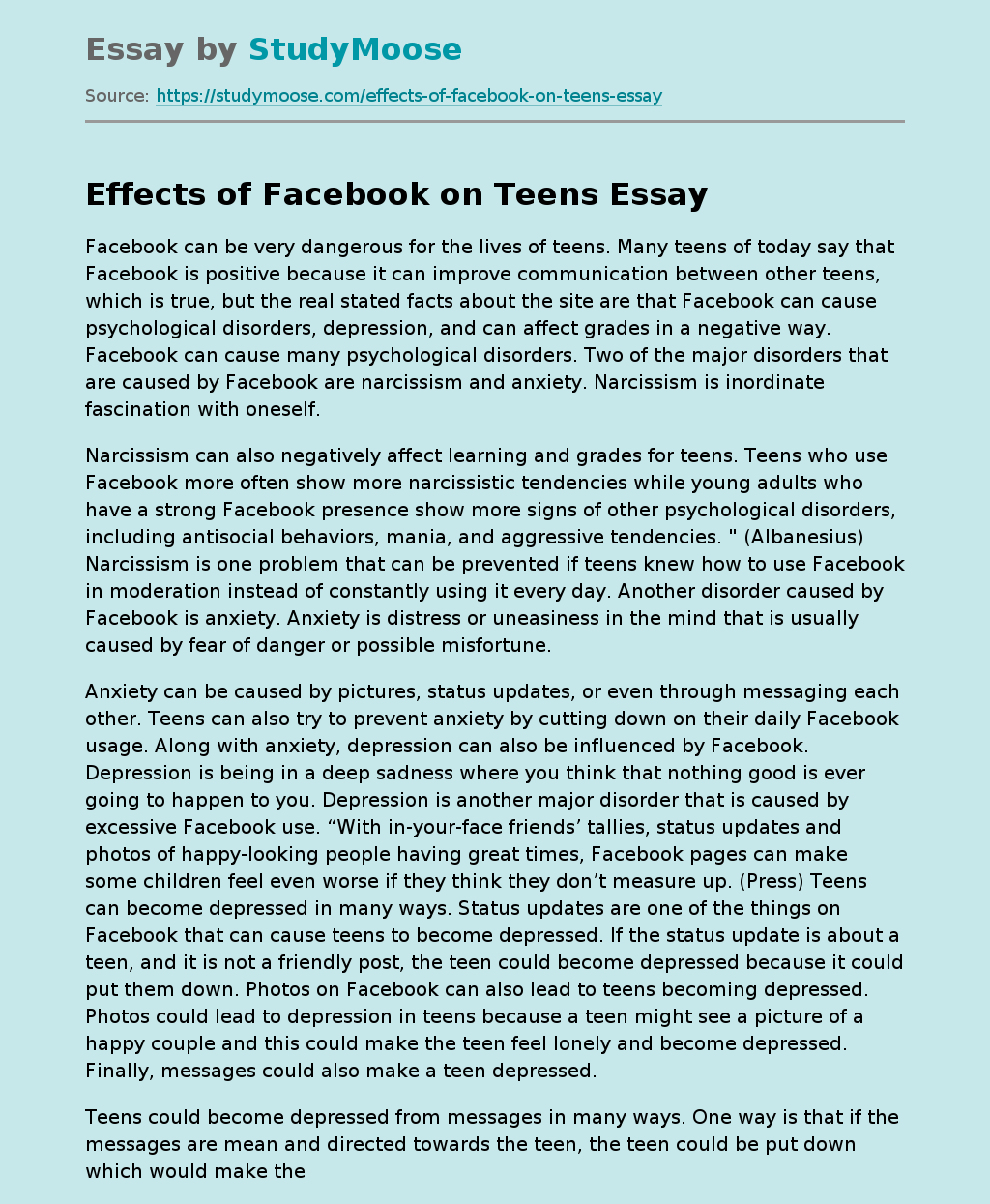