Educational tour offers an opportunity for a rich immersion experience, and a tremendous way to facilitate learning. In an educational tour, students have the chance to experience and explore much deeper level than they ever could in the classroom. Therefore, the North Point College of Arts and Technology, Inc. (NPCAT) conducted an Educational Tour last October 29 – 30, 2012 at Davao City. The school rented five (5) vans to occupy almost 90 persons. It includes the 3rd year students in IT, EET, HRS & HCS and NPCAT Facilitators.

Don't use plagiarized sources.
Get Your Custom Essay on Educational Tour Narrative Report Just from $13,9/Page

I belonged in the No. 3 van together with my co-afternoon class session. Before we went to Davao, I conducted a prayer to ask God’s protection in our trip. We arrived at our first establishment, the Ateneo De Davao University (ADDU) at around 8:00 – 8:30 A.M.

We have been divided into two groups by Ma’am Novie Joy Pelobello. The first group where I belong went to their Integrated Systems Laboratory. Ma’am Nadela, the in-charge of the said laboratory, first introduced their networking equipment such as the different types of series of routers.

These robots have these following features; first, the Touch Sensor that gives the robot sense of touch. It detects when it is being pressed by something and when it is released again. Second is the Ultrasonic Sensor that gives your robot ability to see and detect objects. You can also use it to make your robot avoid obstacles, sense and measure distance, and detect movement. Third is the Color Sensor that enables your robot to distinguish between colors and light and dark. It can also be used as a color lamp. Lastly, the Interactive Servo Motors that give your robot the ability to move. It has a built-in rotation sensor that lets you control your robot’s movements precisely. Afterwards, we took a snack. Then we proceed to the other computer laboratory. Mr. Raven Andrew Recovera, a working student, introduced and discussed to us their Academic Information System (AIS) and Student Information System (SIS).

These systems are using PHP languages. It was created to bring both students and teachers into a high-technology enrollment, evaluation and information system in a convenient way. The students will be no longer go to the registrar and fall in line just to take an enrollment or get a grade. Instead, they will just go to the website of ADDU then log in their account. After the discussion, we went to the solar panel at the rooftop of ADDU’s front building. This solar panel helps the University lessen the electricity usage. They will going to build another array of solar panels after the construction of 10-storey community center building. Solar energy will power the Center’s lighting system. After that we visited the panels, we proceed to their Chemistry and Physics Laboratory. We’ve met Fr. Francisco G. Glover, PhD, SJ. He introduced to us the different experimental equipment used in physics.

At around 12:30 P.M., we took our lunch at Pards Seafoods Grill and Restaurant at Ilustre Corner Duterte St., Davao City. I am so full because of the very delicious chicken barbecue with unlimited rice. At 2 o’clock in the afternoon, we went to Principles Group International. They introduced to us some of the program that they created. The programming software that they are using is the Microsoft Visual C++. The interface is just like Visual Basic but the programming languages that they usually used are the C++ languages. They gave us a tip to make your program precise and organize. It was to segregate the projects and forms of model, view and controller of your program. If something error occurred you will know where to go. To have some shopping and enjoy ourselves, we went to Abreeza Mall.

My companion inside the mall was Sir Galvez Mark Anthony, Lendon, Edgardo, Mark Jhon, Doroteo, and Sir Pejaner. Sir Galvez treated us on Shakey’s. We took our dinner at Fiesta Buffet. Then we went Sunny Point Hotel & Apartelle at Ma-a, Davao City where we can sleep over. I really liked the rooms especially at their clubhouse.

Also their playgrounds were fantastic. Before I sleep, I did first internet surfed and checked my FB account for notifications, messages and friend request. I woke up early in the morning at around 6 o’clock. I do prepared myself and my things then took a breakfast. We moved on to our fifth destination, the Greppoo Inc., located at Matina Aplaya, Davao City. Greppoo Inc. is specialized in Back/Front Desk Back Office, Web, Desktop and a Mobile (Android) Application Developing. They showed to us a sample of their work, a Children’s Bible Story. It will function only on touchscreen cellphones and Android powered cellphones/iphones and tablets. We had proceed to Cubepixels Design Studio located at Wheels N’ More Drive, JP Laurel Ave., Bajada, Davao City. It is one of the leading graphics design companies in Davao City.

It is owned by the very talented and creative Mr. Rey Erwin Rubio. They are composed of young, creative, and dynamic team that specializes in graphics design, website development, photography and animation. They uses the following softwares; WordPress, CorelDraw, Autodesk 3D Max and Adobe After Effects. They’re serving clients from Australia, Singapore, Sweden, and the US. The quality service they render becomes their reputation and holds essential component as they grow. We took our lunch at Edong’s Restaurant located at Km. 5 J.P. Laurel Avenue, Bajada, Davao City. Our seventh destination was in Sutherland Global Services. They discussed the overview of their company and showed to us their working stations and laboratory. It was my first time to see a very big Uninterrupted Power Supply (UPS).

Then we proceed to FEP Printing Corporation. It is the largest newspaper printer in the Philippines. They showed to us on how to produce newspapers. Ninth destination was in Philippine Spring Water Resources, Inc. They are known of their product which is Nature’s Spring. They showed to us a video about Nature’s Spring and how they manufacture it. Then we went to the actual factory of PSWRI. Afterwards we went to the Shrine of the Holy Infant Jesus of Prague. The Shrine is surrounded by lush greenery of tall trees and manicured grasses. Then we went to Jack’s Ridge Resort & Restaurant Corporation. It was really beautiful there because you can see the panoramic view of Davao City. Lastly, we ate on an eatery. Then we went home. 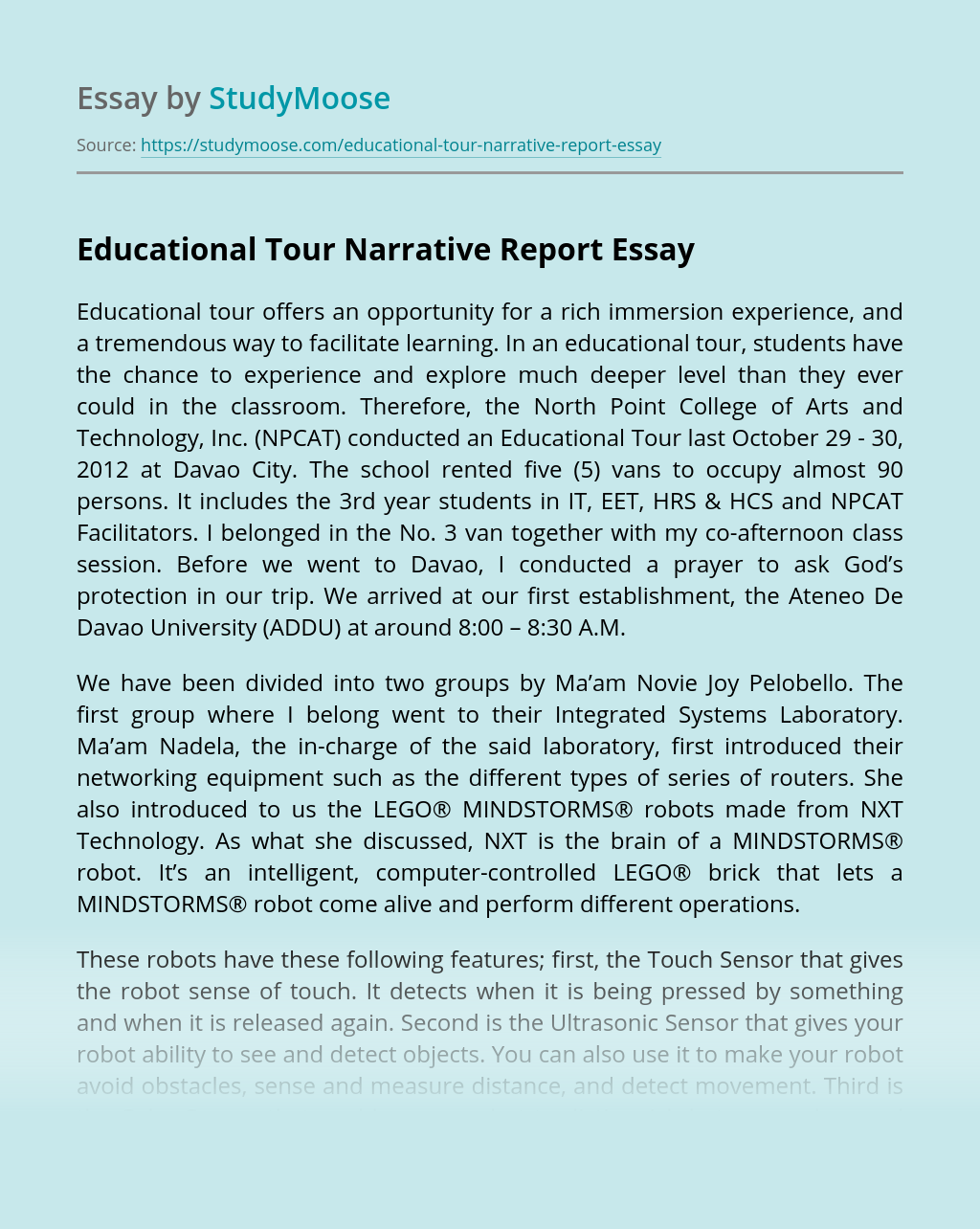