In colonial America, there was enough economic opportunity for a poor European to want to take the long boat journey across the Atlantic Ocean to start a new life. Europeans began immigrating to America creating colonies in the mid-eighteenth century. There were thirteen original colonies. A variety of religions and classes of people such as rich merchants, poor famers, and slaves moved to colonial America. Most, but not all were able to benefit from the economic opportunity in the new land.

Turn in your highest-quality paper
Get a qualified writer to help you with
“ Economic Opportunities ”
Get high-quality paper
NEW! AI matching with writer

This essay will prove how much economic opportunity there was in Colonial America and will also state the factors the affected the colonists’ opportunities to succeed.

One of the simplest sources of opportunity in America was the spacious land. It had not yet been over populated with other countries. (O.I) As in Europe, one does not find a crowded society, where every place is over-stocked. There is room for everybody in America. (Doc. 6) Anything could happen for the new American because there was so much open land.

A second example of opportunity was that there were raw materials and better crop growing climates in America than there were in England. (O.I) Tobacco was a principle article of trade in the colonies. (Doc. 4)

It was a popularly demanded product and didn’t grow well in the European climate. (O.I) By growing this crop, the colonists were able to benefit economically by selling and trading tobacco with Europe. Thirdly, in the colonies many colonists owned farms. In the south, most of the farms produced cash crops.

These were large crops that were grown to sell for money instead of the use of the farmers themselves. These crops were very labor intensive. (O.I) Most of the owners of these cash crops purchased African slaves from slave traders to do all of their work for them. (O.I) ‘It is the poor Negros who alone work hard…’ (Doc. 5)

Although the African slaves did not benefit in any way from this system, the colonists benefited greatly. They had the opportunity to earn money without having to do much labor. In the northern colonies, there was a higher demand for workers due to slow immigration. (O.I) ‘…poor people (both men and women) of all kinds, can here get three times the wages for their labor they can in England or Wales’. (Doc. 2) Here, colonists were able to greatly gain economically and were presented with a huge opportunity to earn more money in the colonies than in England.

A factor that determined the success of a colonist was their social status. Many of the common colonists made their living by farming and selling their crops. In Virginia, a royal governor named William Berkeley would put heavy taxes on the farmers with the consent of the wealthier class. This was due to the fact that the extra money Berkeley accumulated would go to them. (O.I) ‘Bacon’s Rebellion…was the first instance in the colonies “in which the common people rose not only against the Royal government, but also the rule of the privileged class.”(Doc. 1)

In this rebellion Jamestown was burned driving Berkeley out. Taxes paid by the famers were reduced. (O.I) This rebellion shows that the lower class was able to rise against their higher authority, cause them to give in the lower classes demands, and give them what they wanted. A wealthy man could be successful, but so could the poor because of a lack of an established government. Also, if someone was wealthy enough to own a slave, they had a great advantage of success in the colonies. A slave owner could have double to work they needed done for half the price it would coast to hire other colonists or work on their own. (O.I)

In colonial America there was a great amount of economic opportunity for colonists who emigrated from Europe. They were able to grow profitable crops by taking advantage of the good climate and spacious land. They were able to suppress their governor when their demands were not met and a sense of equality was established. Colonists took the advantage of owning slaves to do the labor of mass producing cash crops. And some colonists had the opportunity to be paid handsomely for their labor in the colonies. These examples and factors are clear evidence that there was economic opportunity for the colonists in America.a

Economic Opportunities. (2016, May 11). Retrieved from https://studymoose.com/economic-opportunities-essay 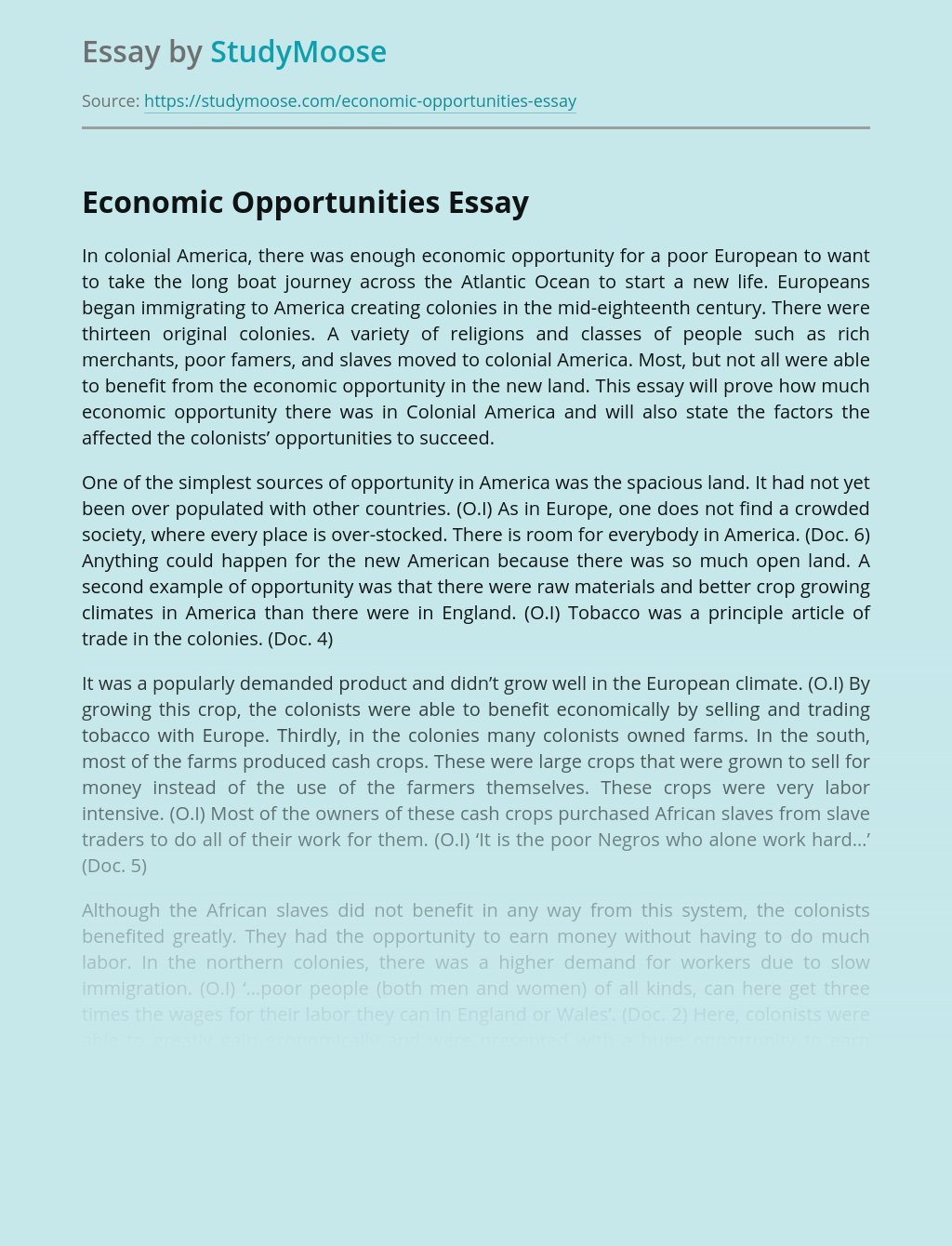 Turn in your highest-quality paper
Get a qualified writer to help you with
“ Economic Opportunities ”
Get high-quality paper
Helping students since 2015
Stay Safe, Stay Original