Duke Ellington was born on April 29, 1899 in Washington, D. C. Ellington was an influential American jazz composer, pianist, and bandleader. His popularity grew leaps and bounds after his death. The nickname ‘Duke’ was given to him by a childhood friend who admired his regal demeanour. The name caught on with audiences and he became famous for instrumental combinations, improvisation, and jazz. He started studying keyboard at the age of seven and by seventeen he had made a professional debut.

His move to New York City in 1923 brought him one step closer to his worldwide success and recognition years later.

Don't use plagiarized sources. Get your custom essay on
“ Duke Ellington ”
Get custom paper
NEW! smart matching with writer

Ellington and his band played for everyone from Queen Elizabeth II to President Nixon and teamed up with greats such as Miles Davis, Cab Calloway, Dizzy Gillespie, Ella Fitzgerald, Tony Bennett and Louis Armstrong. His achievements include his honorary doctorate from Howard and Yale University. He was also a member of the American Institute of Arts and Letters.

He was elected as the first jazz musician member of the Royal Music Academy in Stockholm and won and the Presidential Medal of Freedom in America.

In addition to this, he was awarded the Legion of Honor by the French Government. He became one of the most well-known African-American celebrities of the twentieth century. While recording with record companies he also appeared in several films. Ellington also joined the Alpha Phi Alpha, the first black Greek letter fraternity. The suave and witty Ellington described his musical style as “American music” rather than just jazz.

Some very impressive musicians served in his orchestra and remained with the organizations for many years. Although, many of them were noteworthy in their own right but it was Ellington’s creativity and musical brilliance that made them into one of the best orchestral units in the history of Jazz. Some of his major compositions include Mood Indigo, Sophisticated Lady, Satin Doll, Do Nothing ‘Til You Hear From Me and I Let a Song Go Out Of My Heart. His music had the ability to change style, adapt and grow within each era.

An example of this is The Hot Jazz of the 1920s which changed into the Swing music in the 1930s. This is one of the major reasons why the Ellington Orchestra was able to hold its own for so many years. When Jazz music became increasingly popular in America, Ellington spontaneously improvised his simple themes to more creative orchestration while uniquely combining tone quality. He innovated his music along the way by carefully attending to structure and balance within his jazz arrangements at the same time allowing for solo improvisations.

He had an ability to create fresh sound by drawing instruments from different sections of the band and voicing them together as a unit. Piano players like James P. Johnson and Willie “The Lion” Smith influenced his incredible piano technique. He died on May, 24 1974, in New York City. Ellington will be forever remembered as an ambassador of American music and culture for his enormous contributions to American music. Jazz music could not have developed in America without Ellington’s efforts. His estimated two thousand compositions, arrangements, and collaborations continue to move people worldwide. 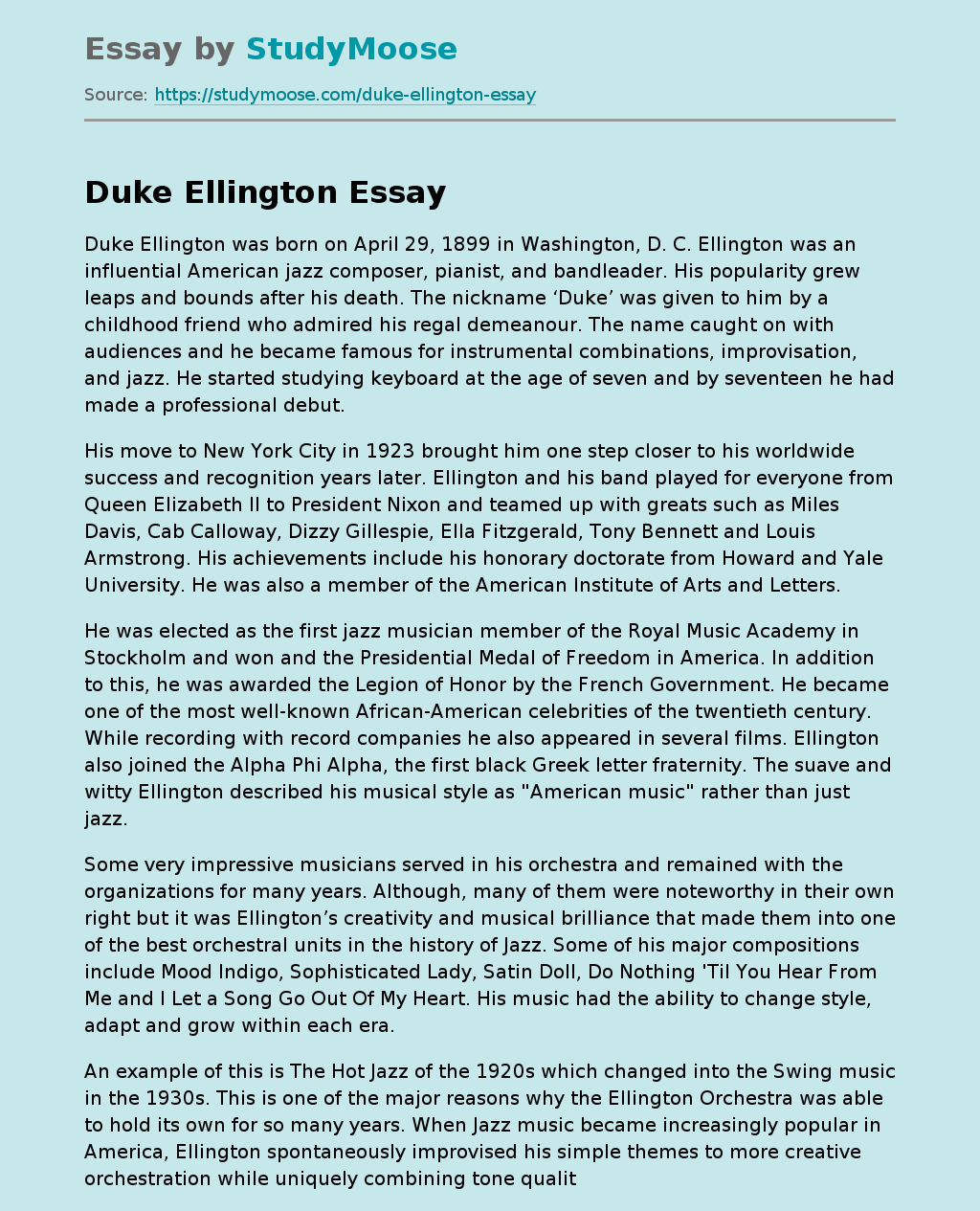