Everyone knows they should get or stay healthy. For most people getting healthy means eating a little less, exercising a little more, or abstaining from smoking and drinking. However, for those who have a problem with drugs—as well as alcohol—getting healthy is literally a matter of life and death. The problem with drugs and alcohol is that there are more factors than just a nice feeling. There are, in more cases than not, addiction issues that are related to a familial history of substance abuse.

Don't use plagiarized sources. Get your custom essay on
“ Drugs: Addiction and Quitting ”
Get custom paper
NEW! smart matching with writer

One must also consider the environment the individual either grew up in or lives in, on top of the original reason (s)he started the substance in the first place. According to White House Drug Policy the statistics on drug use in the United States are staggering. In the most recent poll, 41% of people have admitted to trying a drug. However of the people polled, only 12% are regular users (National Office of Drug Control Policy, 2002).

White House Drug Policy only names two specific drugs—marijuana and cocaine—but the statistics on both are hopeful; regular uses for both have gone down.

On Marijuana, the number of people who have used it was at 18. 1% in 1979 to 8. 3% in 2001 (more recent numbers not available). Cocaine use has gone down too; from 3. 65% in 1979 to 1975 in 2001 (again, more recent numbers not available). Their quote of marijuana numbers makes sense because pot is the most used illegal substance in the world. When talking about drug use, the easiest examples to find are those involving marijuana.

One reason for this is it is widely and erroneously believed that cannabis, as a plant, is not dangerous.

Although it is not as dangerous as nicotine or alcohol, it is still hazardous to one’s health and brain function. Anecdotally, people who engage in moderate to heavy pot use long-term tend to be slower and “goofier” than those who either do not indulge or are occasional users. When looking at drug use, the main reasons people start tend to be intrinsic and fall into five categories: acceptance, curiosity, social contact, status, or vengeance. Breaking these down and matching them to marijuana, acceptance is another tern for peer pressure. Teenagers (the largest group who first try ot) are told to just say “no” when their friends try to persuade them to try drugs, but in that situation, when one’s friends mean more than one’s parents, it is hard not to cave to the pressure. Another reason people try drugs is that they are curious—interesting aside, this is also the number one reason teens have sex for the first time. My boyfriend is a pot-user and he told me that he tried it because there “was no harm in at least seeing what it was like”; I disagree, but silently. With Marijuana, social contact and status tend to be interlinked.

According to a pot-user, going to a social function with one’s “baggie” is like going with cookies; it is a way to show good will and love. The last intrinsic motivator is vengeance and in the case of cannabis this is mostly a teen-age motivation; getting back at one’s parents. Several teenagers have said they started doing drugs/smoking/drinking because there were mad at their parents for some supposed slight. The slights can be anything from a mother dating someone new to parents expecting their child of engaging in substance abuse before the teen does.

All of these factors can lead to long-term substance abuse and with that addiction can set in. With all other drugs addiction almost a guarantee; with pot the most people do not believe that it can cause a chemical dependency. However, there are several very clear signs of pot addiction. These include a wish to but the inability to quit, a lack of motivation and depression, anxiety, anger, relationship problems both romantic and familial, reallocating money from rent or food to buying drugs, finding any excuse to use and becoming defensive when concerned loved ones want to get the user help (Addiction Treatment Challenges, January 25, 2009).

For those with a chemical dependency to pot, the two most effect parts of the brain are the hippocampus and the amygdala; the emotion/memory and aggression/fear centers of the brain, respectively. Australian research published in the Archives of General Psychiatry found that heavy cannabis smokers had smaller hippocampus and amygdala regions of the brain. The research also showed that there is a possible link to depression and heart disease. The research also stated that as the younger brain is still maturating, “it is more susceptible to the harmful effects of drugs . (Archives of General Psychiatry, June 2008). The reasons some people will become addicted to pot and some do not seems to have a basis on a family history of addiction. For some, addiction is a strong hereditary trait. Just from personal observation, those with a higher likelihood of becoming addicted have at least one parent who was an addict, and sometimes a grandparent as well. For some brought up in a drug-positive atmosphere, they will use drugs as their parents have because they do not realize or care how dangerous they can be.

Through their genes and upbringing, they were practically born waiting addicts. Of all addictive substances, Alcohol, cocaine and marijuana habitual behaviors are all behaviors that will more likely than not he passed through families (Archives of General Psychiatry, November 1998). Some children born to this environment will rise to overcome the example their parents set. Sadly, most will unfortunately repeat their parent’s mistakes. Addiction is not just in one’s genes. A toxic environment can also lead to addiction or staying in the drug.

Hobbyists will usually flock together to share in their similar interest, for drug addicts, it is the same. Several Marijuana users have said that quitting will mean the will not have any friends left. One has confessed that he started reconnecting with his friends who do not do drugs because he noticed that all of his friends were drug addicts. He personally wanted to balance them out with people who are clean. For this individual, his time with his drugs is hopefully coming to a close.

Drug use worldwide and in the United States is a problem and while it is not a large comfort that the most widely used drug in marijuana, there are several far worse drugs available, some of which are even legal. When looking at physical and mental health, the only good illegal drug is the one that remains untouched. Taking into account all of the factors that go into drug addiction, getting clean can be—and is—almost impossible for some. It is an uphill struggle that most will face daily because not only is addiction in the mind, it is also in one’s behavior. 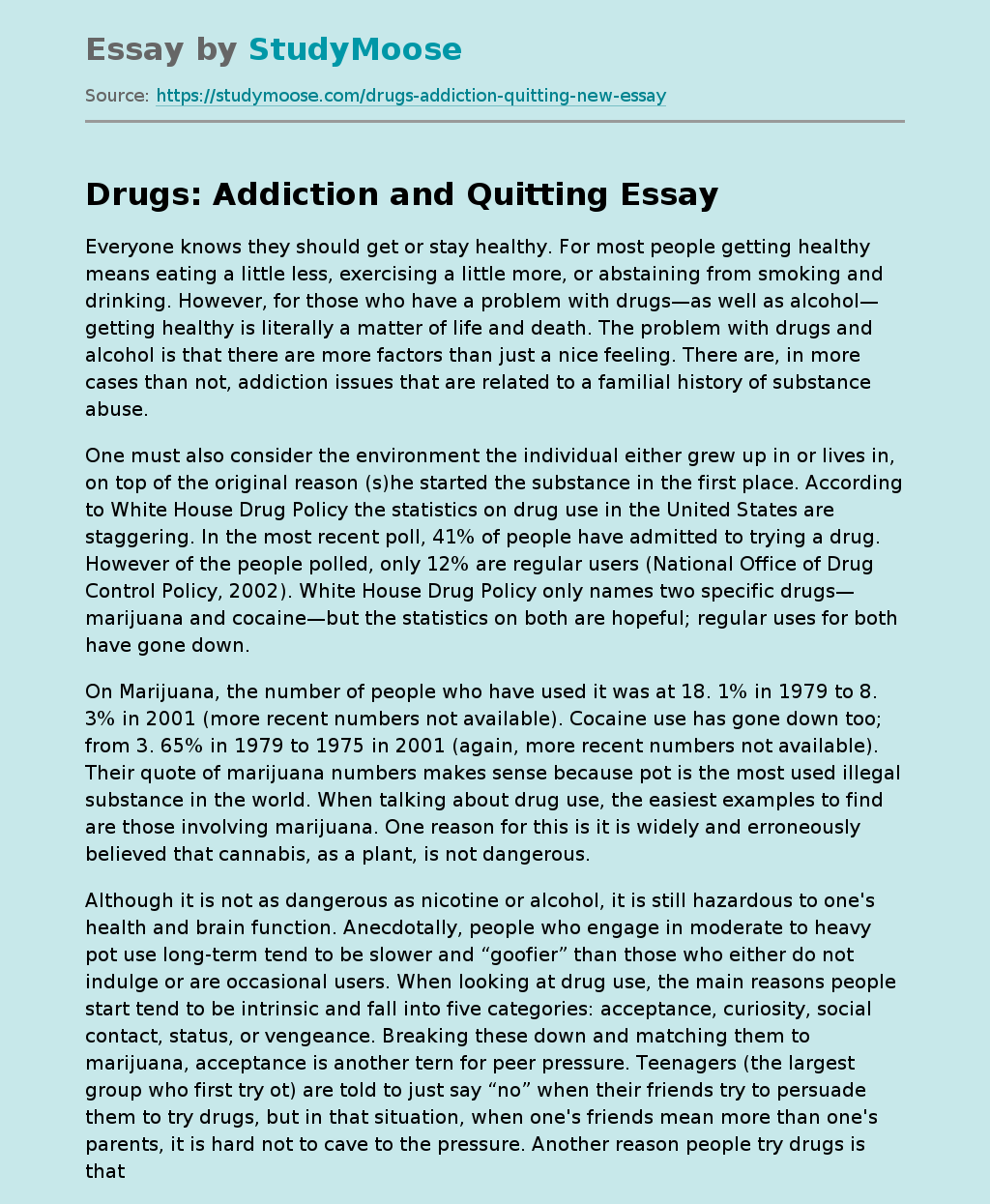